I have some Doctor Who figures on the way, including some Silurians, and I decided a Pterosaur would be just the thing to add to their forces: 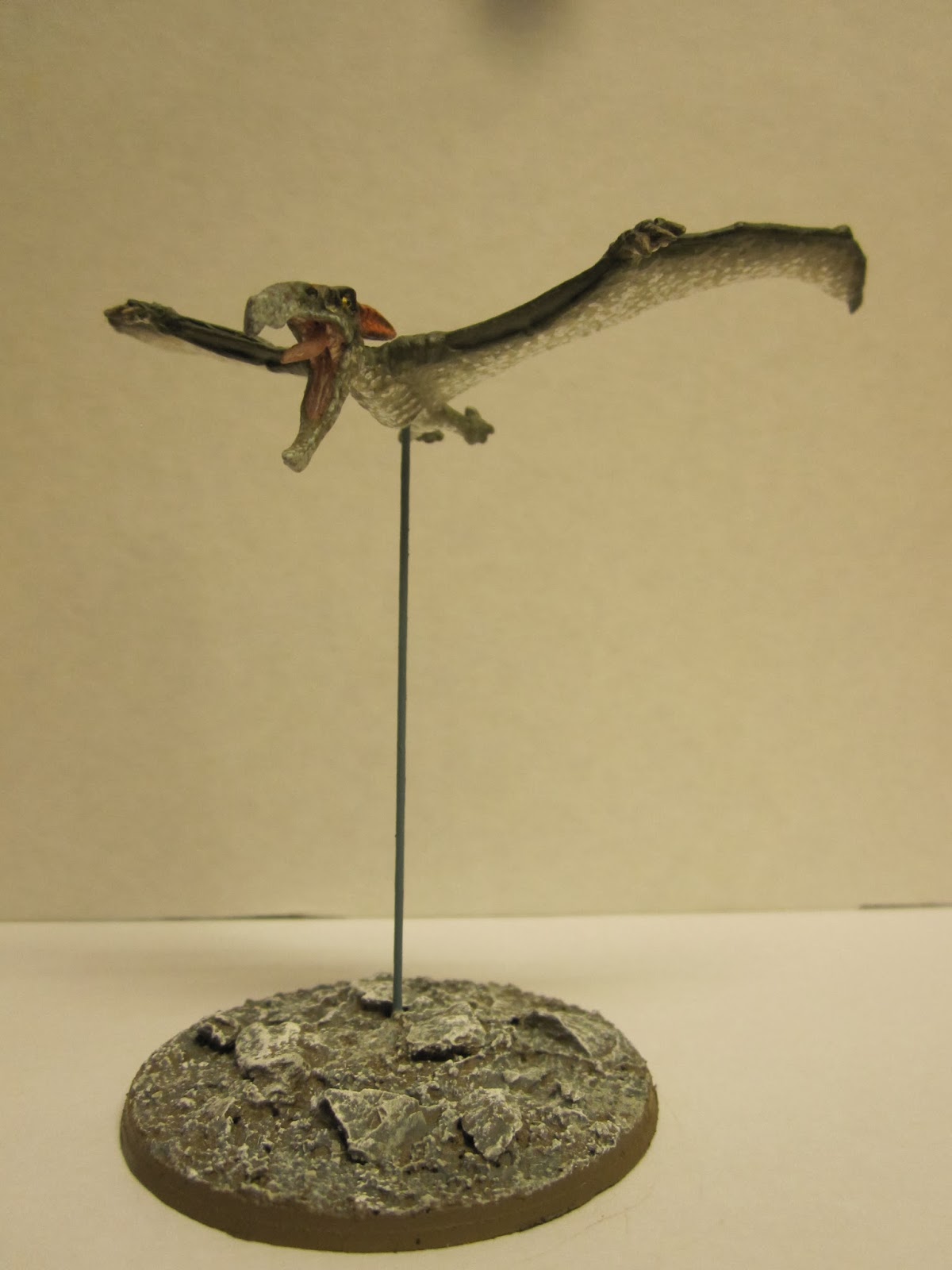 ﻿I found this Copplestone figure several years ago in the discount bin (only $2!) of a hobby shop that was clearing out their miniature inventory, and I figured at that price I could find some use for it. 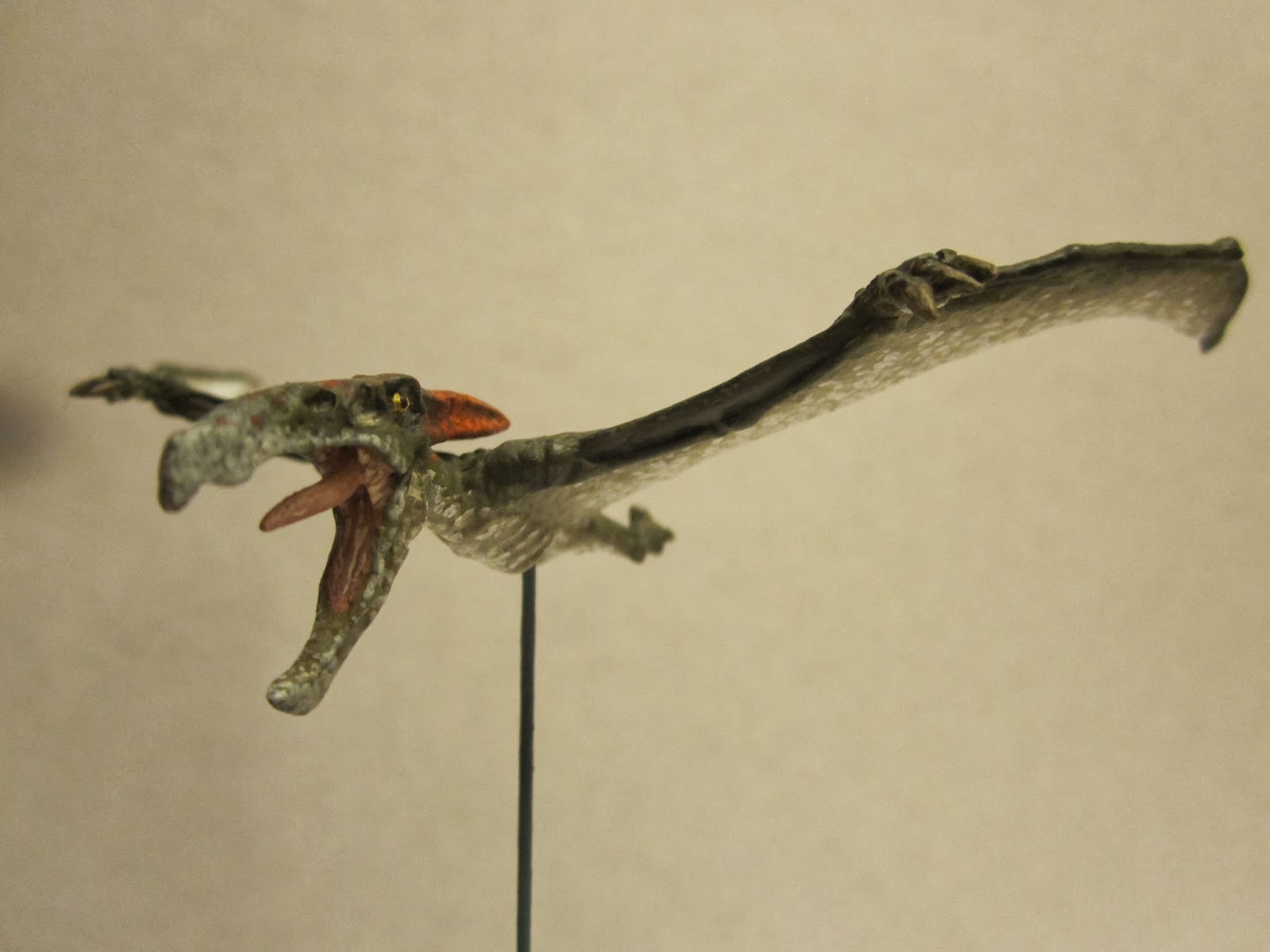 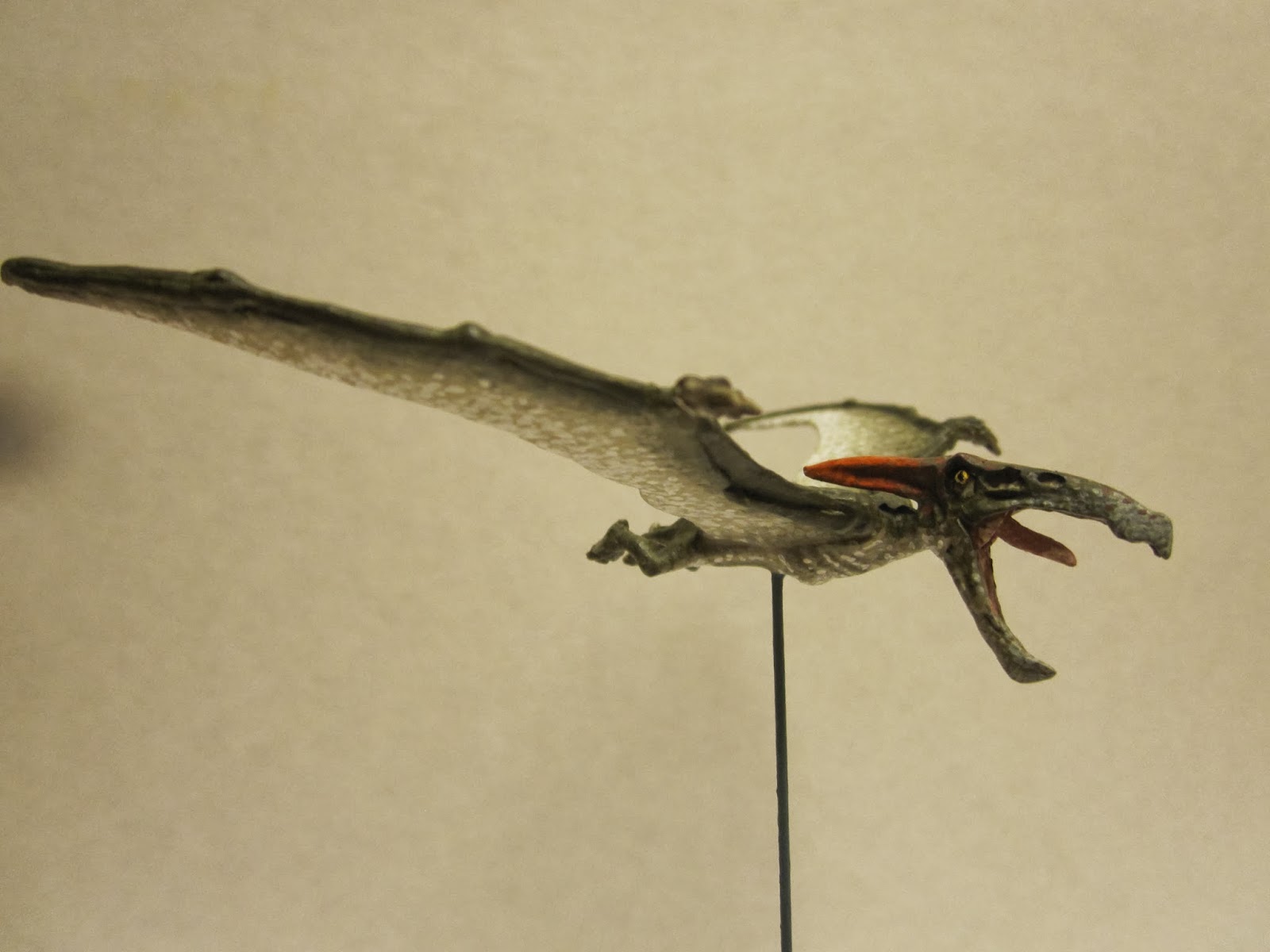 Current thinking is that the crests were for sexual display, so I've given mine some orange bling to attract the ladies.  I also used a pointillist style on the skin to give it a bit more of an interesting texture. 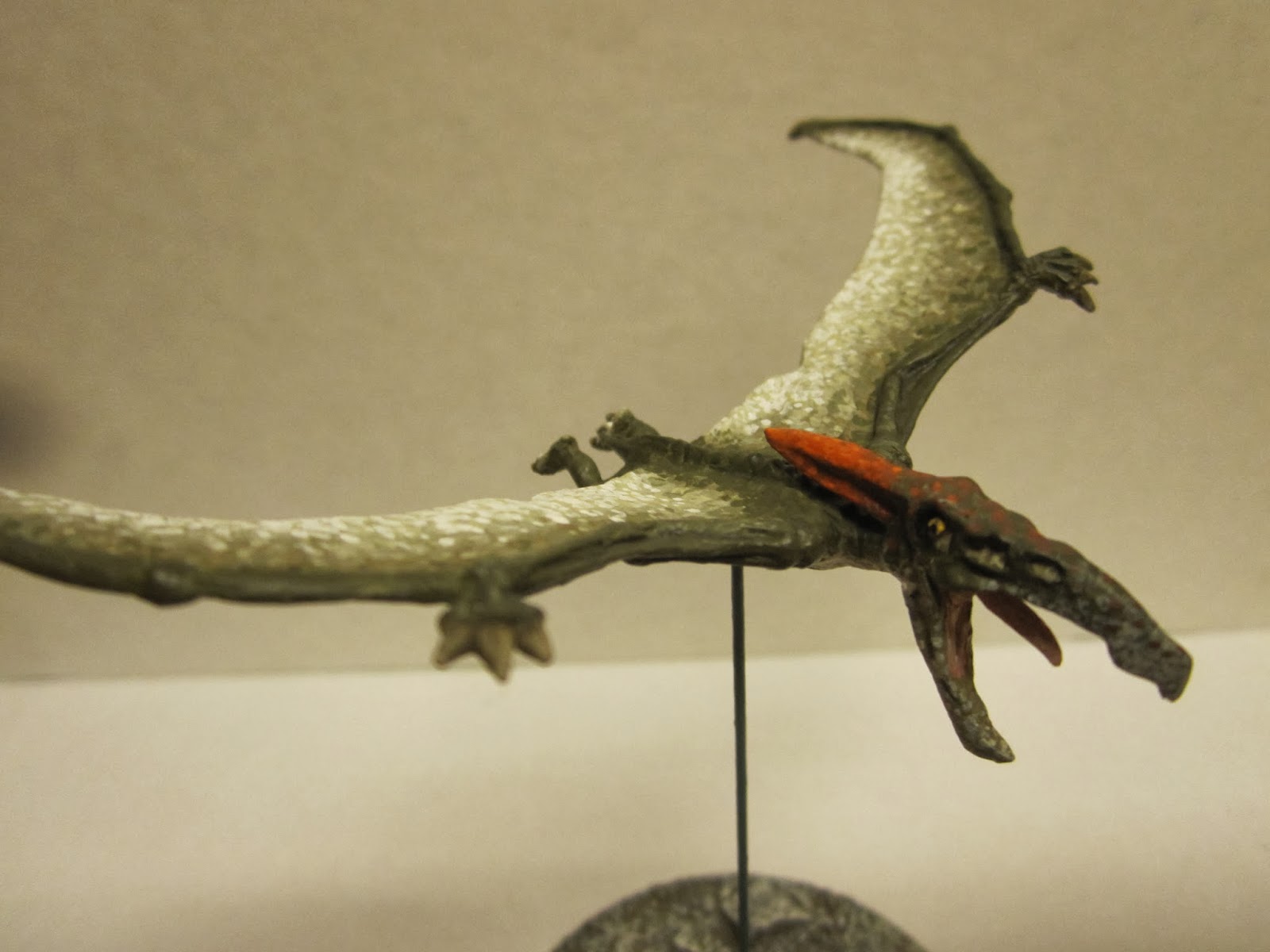 As you can see below, the figure is quite large, with a wingspan of 11cm. 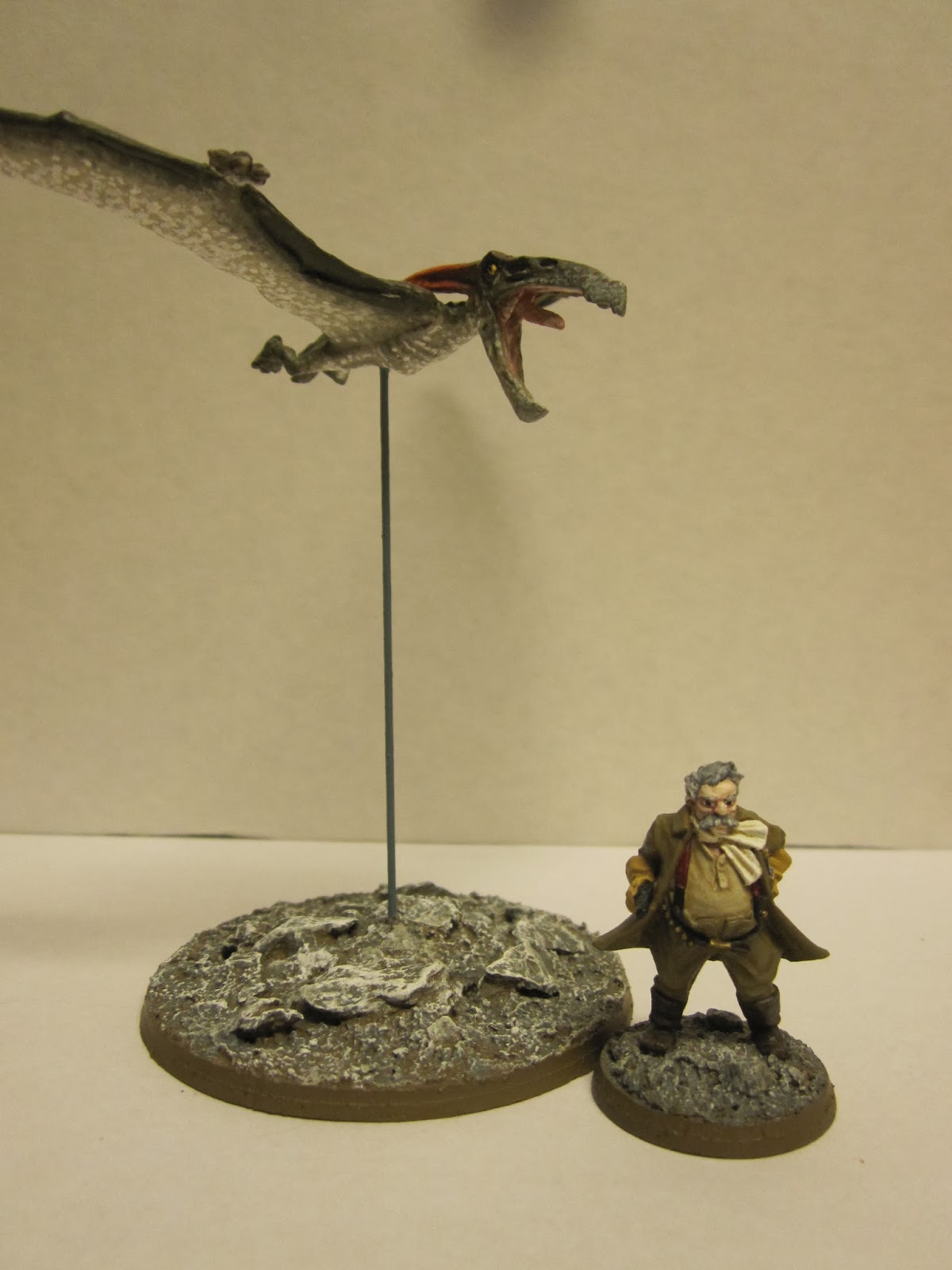 I think this should be just the thing to put a bit of fear in the U.N.I.T. troops.
Posted by Major Thomas Foolery at 1:22 PM 4 comments:

Email ThisBlogThis!Share to TwitterShare to FacebookShare to Pinterest
Labels: Doctor Who, Science Fiction

Superhero Gaming with My Kids

Another old project. Late last year, my sons started taking an interest in my painting and modelling, and wanted to know if they could play a game with me and my figures. At their ages (5 and 3), I felt my games would be a bit complex for them, and I was a little worried about broken gun barrels, so I wanted to come up with something else for them.  Both are big superhero fans, especially for Superhero Squad, so I thought that would be a good avenue to go down.

Heroclix would be the obvious choice, but I don't like the random nature of the figures in most boxes, and I'm not generally a fan of the sculpts.  Plus, my kids were interested in trying to paint and I wanted to encourage making your own toys.  So it was off to the FLGS to pick up a few Reaper figures to get us started, along with using some Urban Mammoth figures I had purchased a while back.

I knocked out a quick set of simple home brew rules to use for the game.  They don't cover everything, so I fill in gaps as things come up.  For each character, I generated a stat card listing their abilities and wounds.  Needless to say, the rules weigh heavily in favor of the heroes.  I didn't want characters like the Hulk and Superman to dominate the game, so I assigned a cost in pennies for each power (the stronger the power, the higher the cost).  Each of my sons gets a tub of pennies to spend, with a set number of new pennies received each round.  Spend all your money, and your characters are too tired to do anything that round.   This helps them practice their counting and in learning to plan and prioritize (with coaching on their options from dad).

My sons always play the heroes (of course), so I run the the villains for them.  Generally the most they can handle is 2-3 characters, and I try to keep the games under 20 minutes or their attention wanders.

The first game went well (though my 3-year old sulked off when the Angel was knocked out of play by Doctor Doom), so for Christmas we ordered some new figures from Reaper, Crossover, and Old Glory.

We still have more to go, but here's what the boys and I have painted so far.

It's been really fun to have a project to work on with my sons, and I hope this will start an interest in miniatures for them.
Posted by Major Thomas Foolery at 3:34 PM 7 comments:

The second building I completed this weekend was the Garage kit T017 from Scalescenes.com. 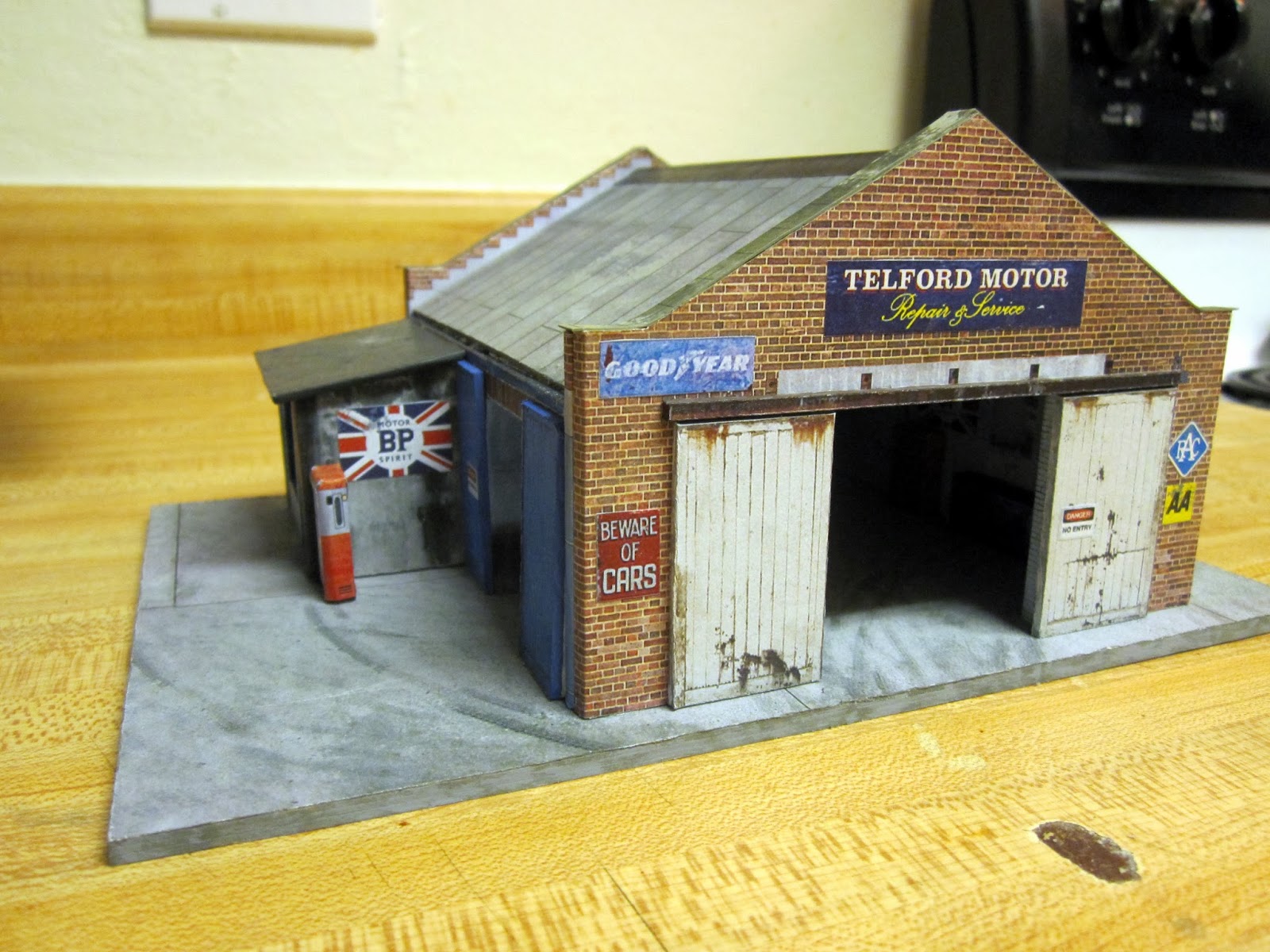 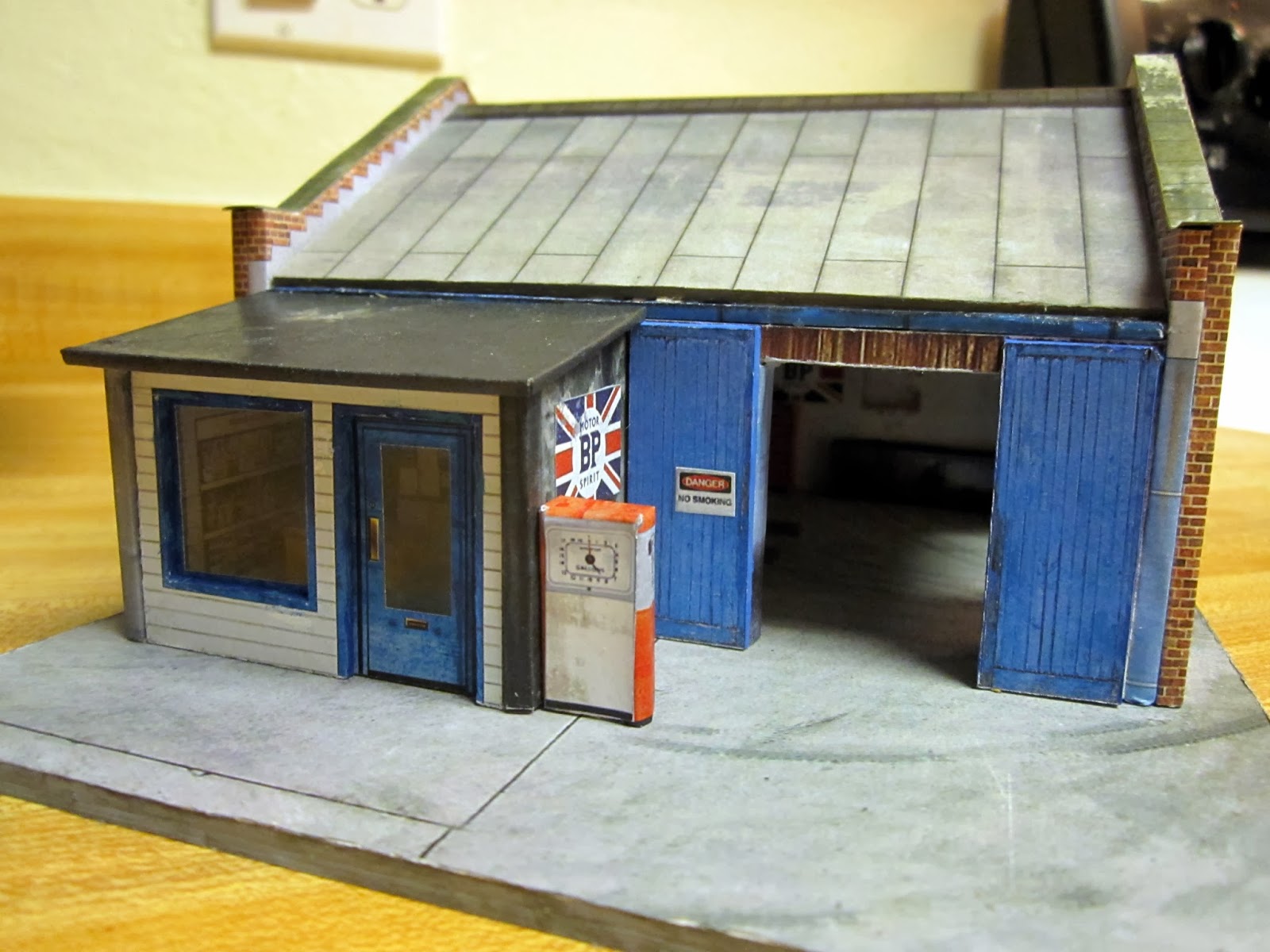 This is a very simple kit and easy to build (I did it in an afternoon), but you get a lot of bang for your effort. You have a variety of shop names to choose from, and you can make it a BP, Shell, or Esso station. However, what I really like is the interior detailing. 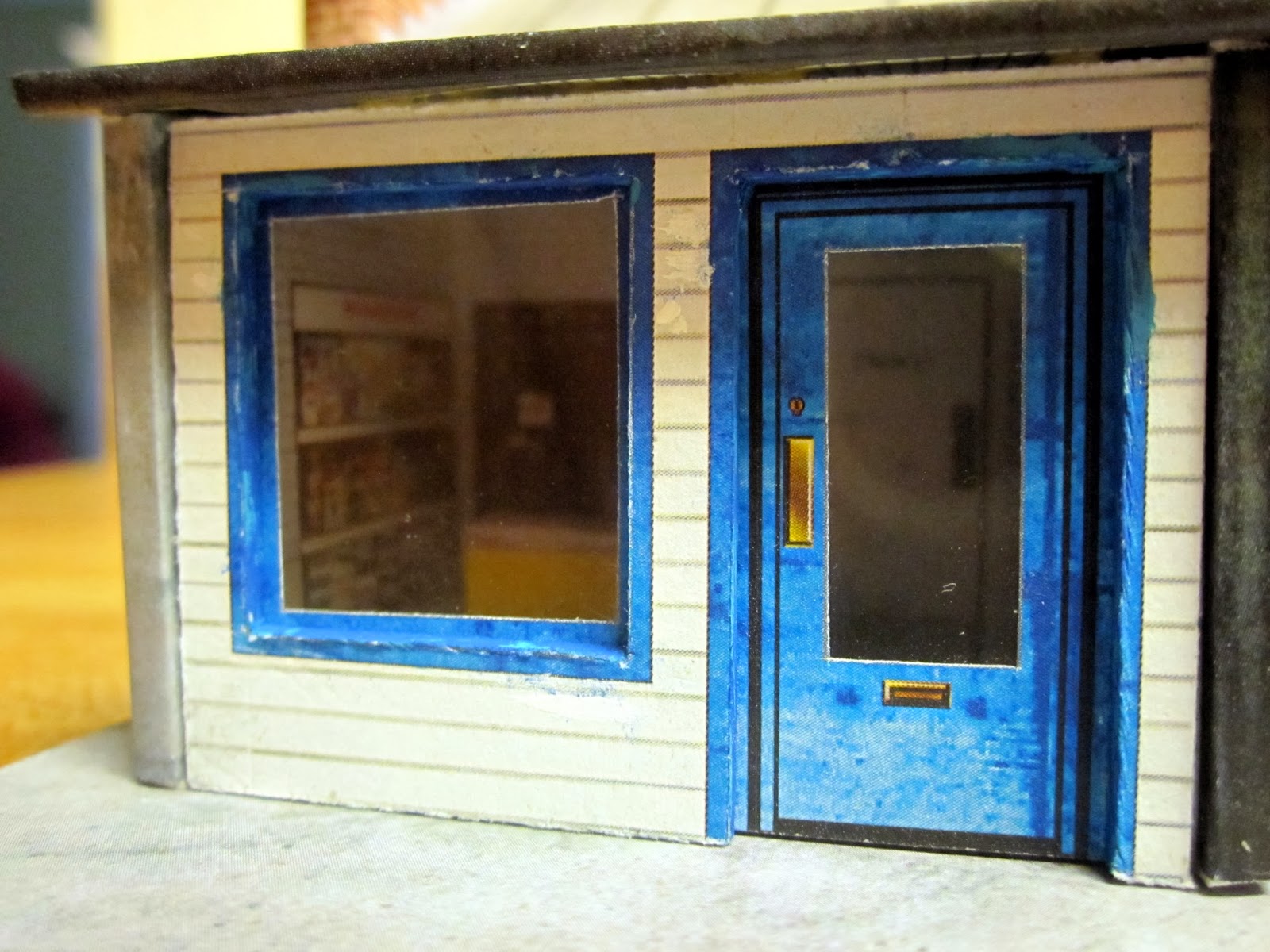 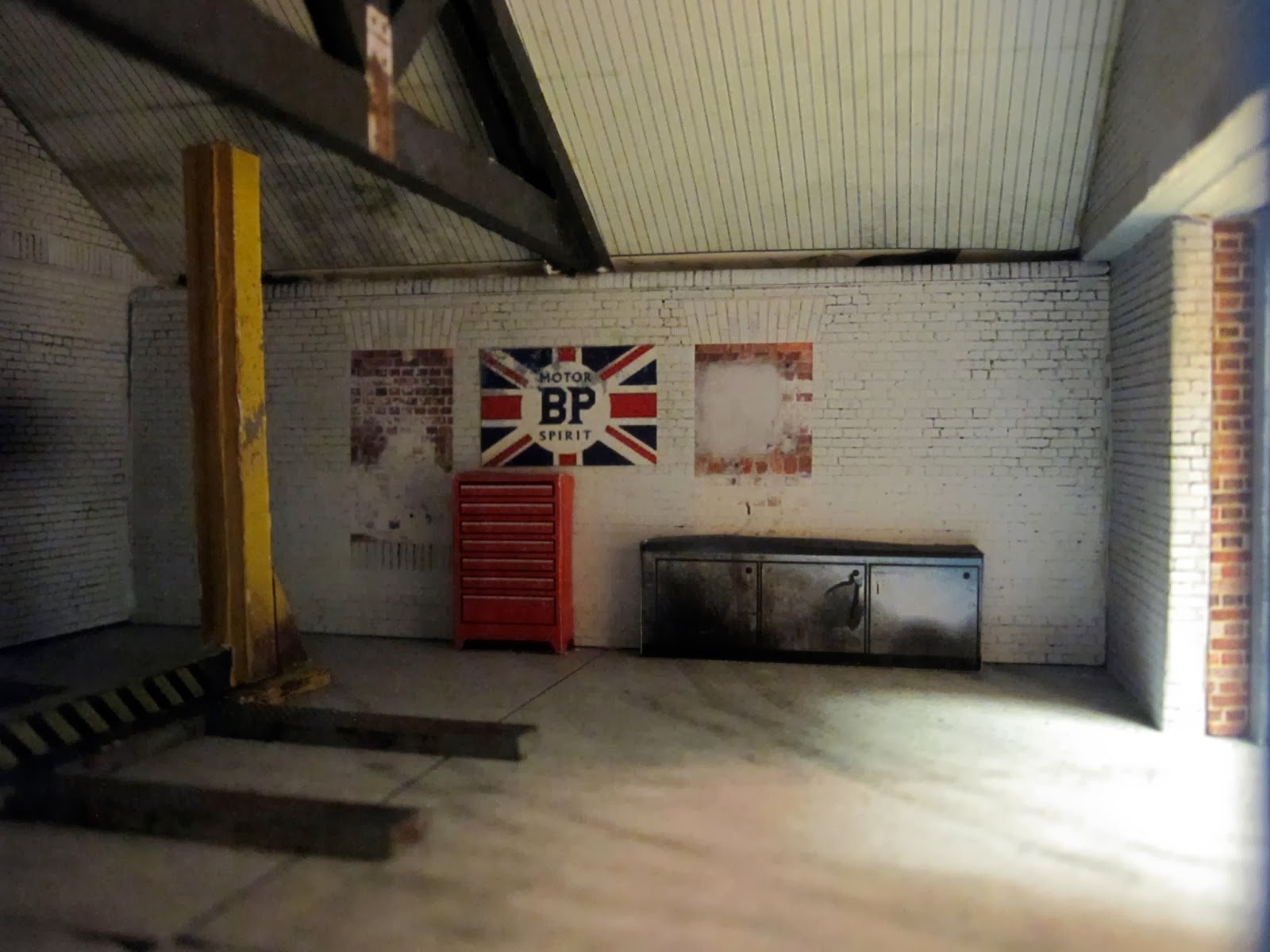 For the interior of the garage, you almost need to do a double take to make sure you are actually looking at a model; there are even tire mark on the floor.

Finally, the Lledo cars even fit, which is great. 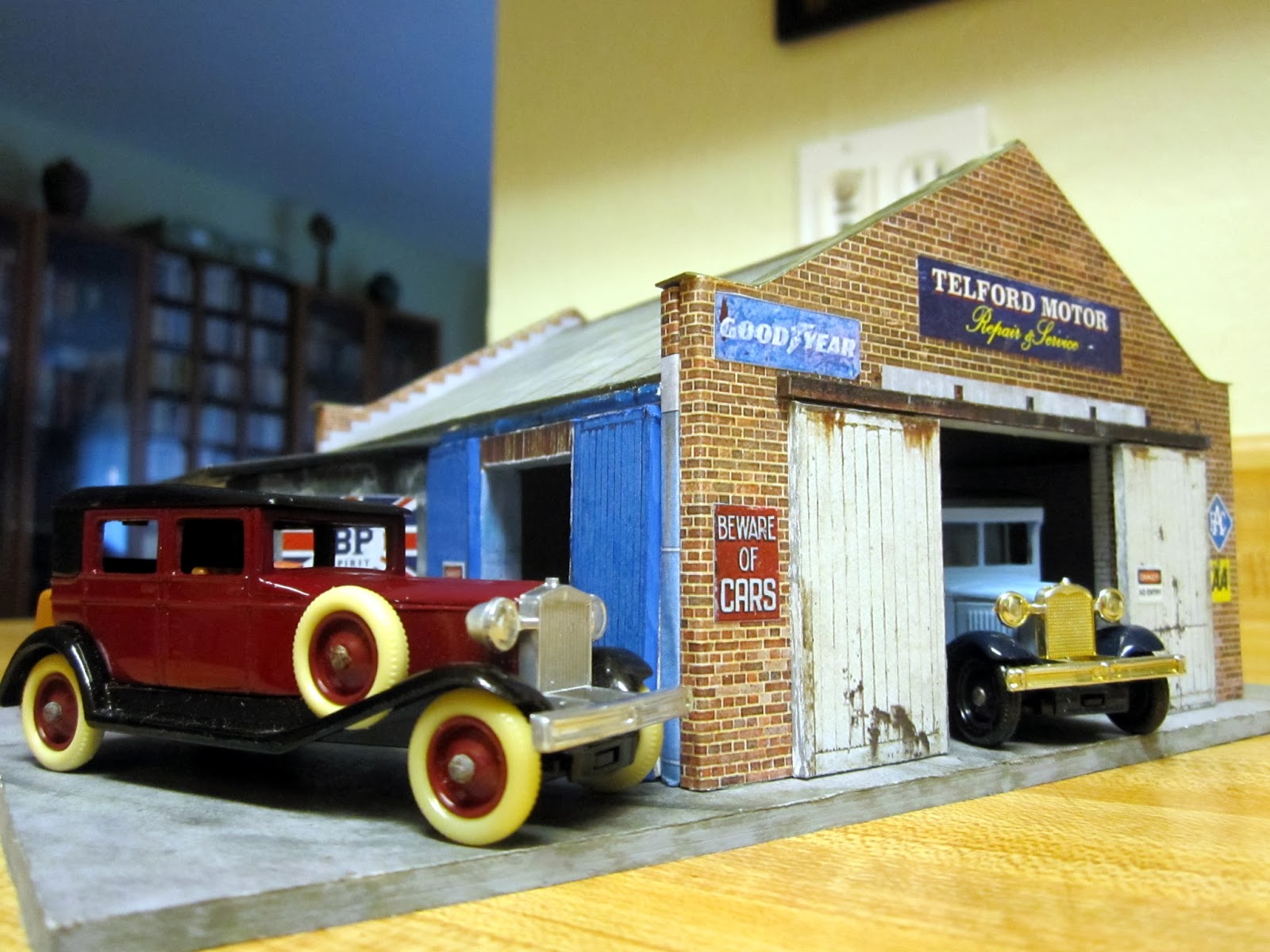 Overall, one of the easiest kits I've build from the series, and I love how good it looks for such minimal work.  Needless to say, control of the fuel will be a major objective of my VBCW games.
Posted by Major Thomas Foolery at 2:02 PM 4 comments:

The kids have been off visiting the in-laws this week, so it's been a good time to knock out some buildings.  First up is Terraced Houses kit T020 from Scalescences.com.


This is the largest of the kits I have built so far.  Scaled up 120% to 1/63 size, it  is about 20cm high and almost 30cm deep. With the exception of the bay windows, which are a bit fiddly, it wasn't too difficult of a build (about a 1 1/2 weeks of evenings).  However, expect your hands to get sore cutting, as there are a lot of pieces.

To add variety, the building comes with the usual section of doors and window dressing, and you can rotate the sidewalk 180 degrees if you want the tile/brick work in the back instead of the front. If you so desire, the kit can be attached to the corner shop kit and shopfronts from that kit can be used on this building as well.
Posted by Major Thomas Foolery at 1:22 PM No comments:

Bought another car this week: 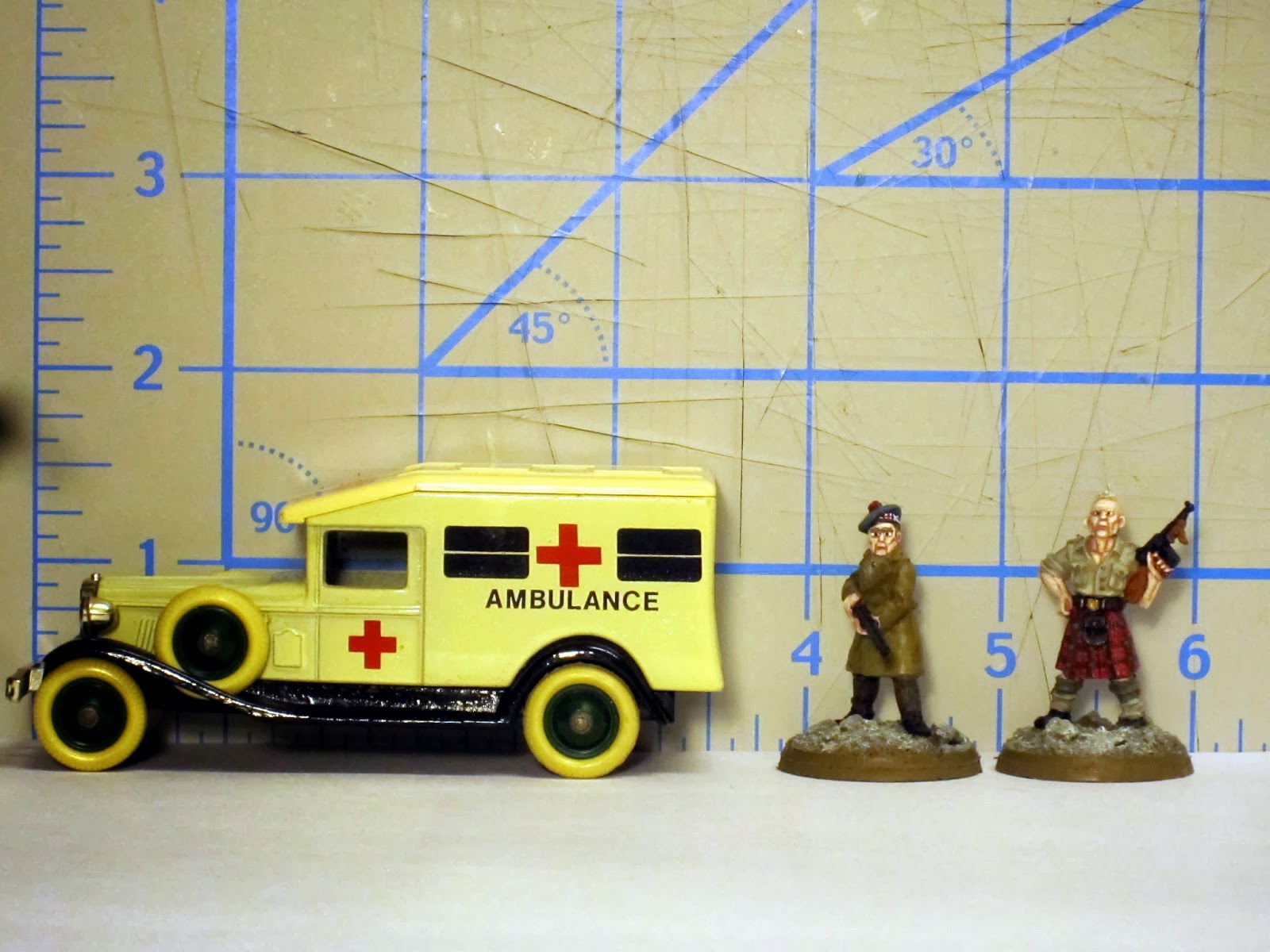 I am unable to locate a photo of the real vehicle for comparison, but I think it looks good with the figures.
Posted by Major Thomas Foolery at 12:59 PM No comments:

The first of my Local Defense Volunteers (LDV) to help defend Kelso from the fascists:
﻿
﻿

﻿﻿
﻿﻿ There are figures from Artizan's Thrilling Tales line.  My vet is wearing a Victory Medal, British War Medal, and 1914 Star. Doc was actually a member of the French resistance, but since I don't plan to use suitcase bombs in my game, I decided he would make a good medical officer.  Sue was a French maid (hence the shorter shirt), but I though the apron would make for a great cafe owner who doesn't want to serve tea to any blackshirts. The armband on the machine gunner mimics one from 1940 as seen in Osprey's, "The British Home Front 1939-45." Lettering was done using rub off transfers from Woodland Scenics.
Posted by Major Thomas Foolery at 8:20 PM 2 comments:

Another couple of vehicles arrived today. 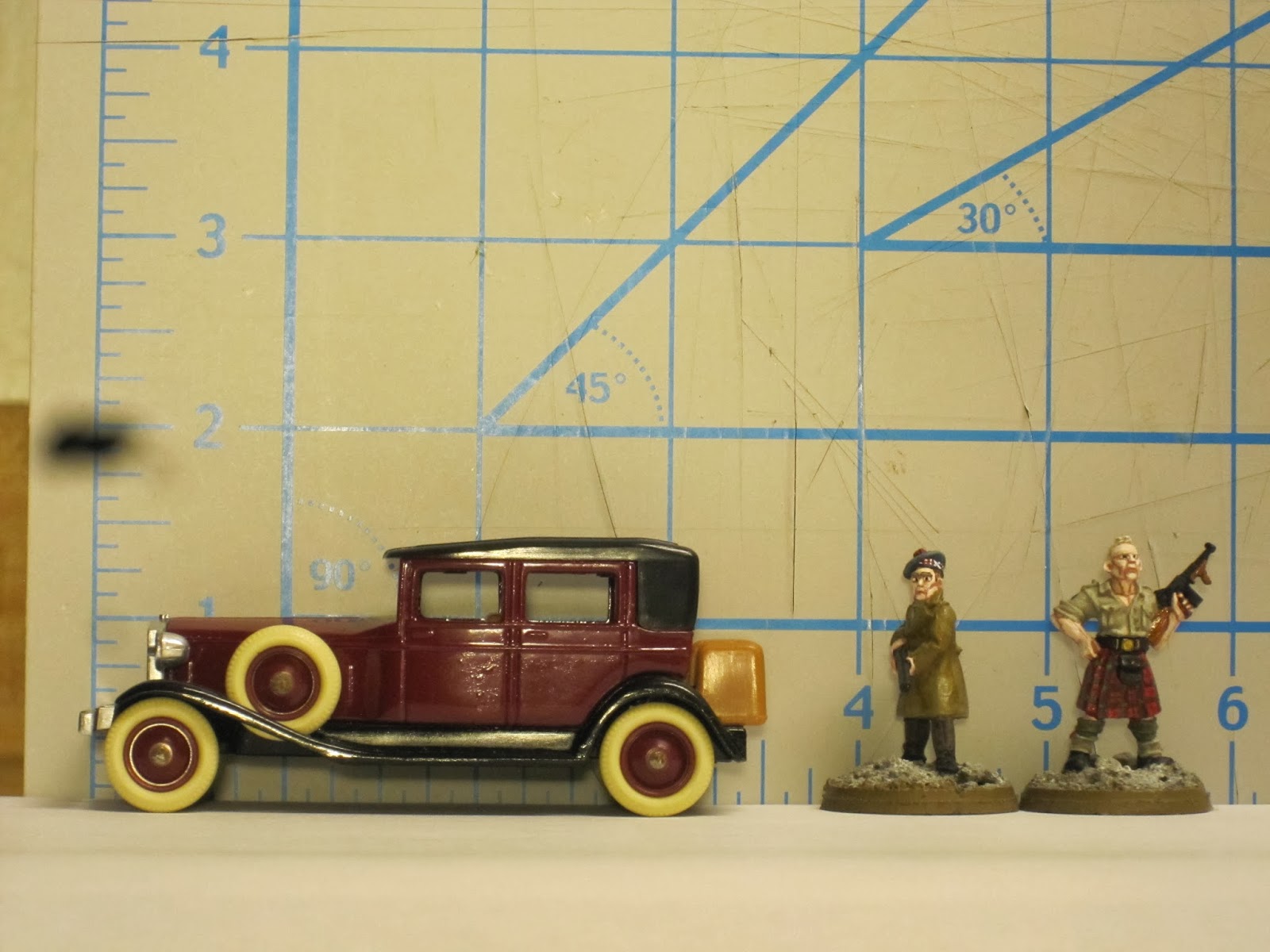 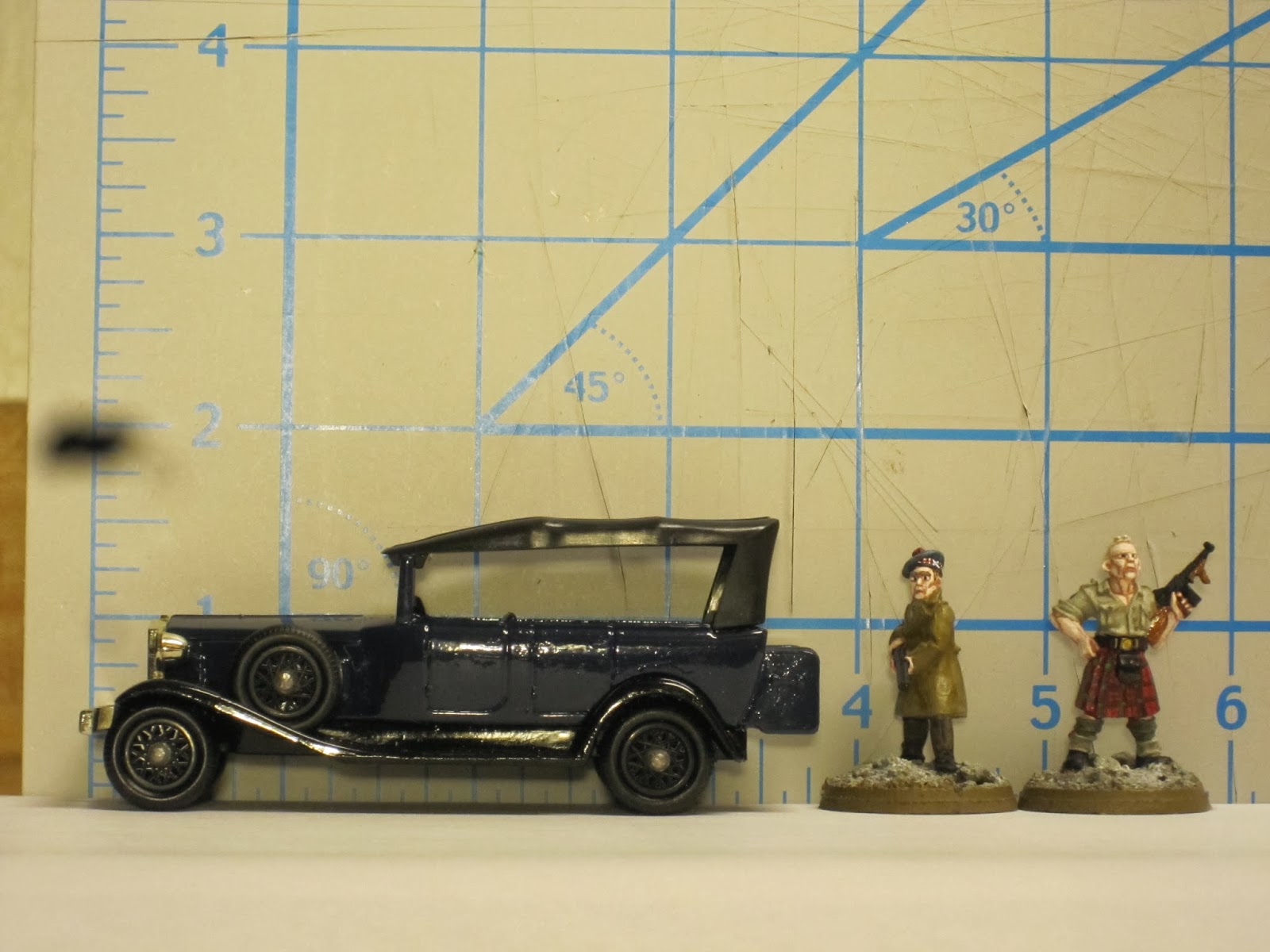 Compared to the Model A Truck 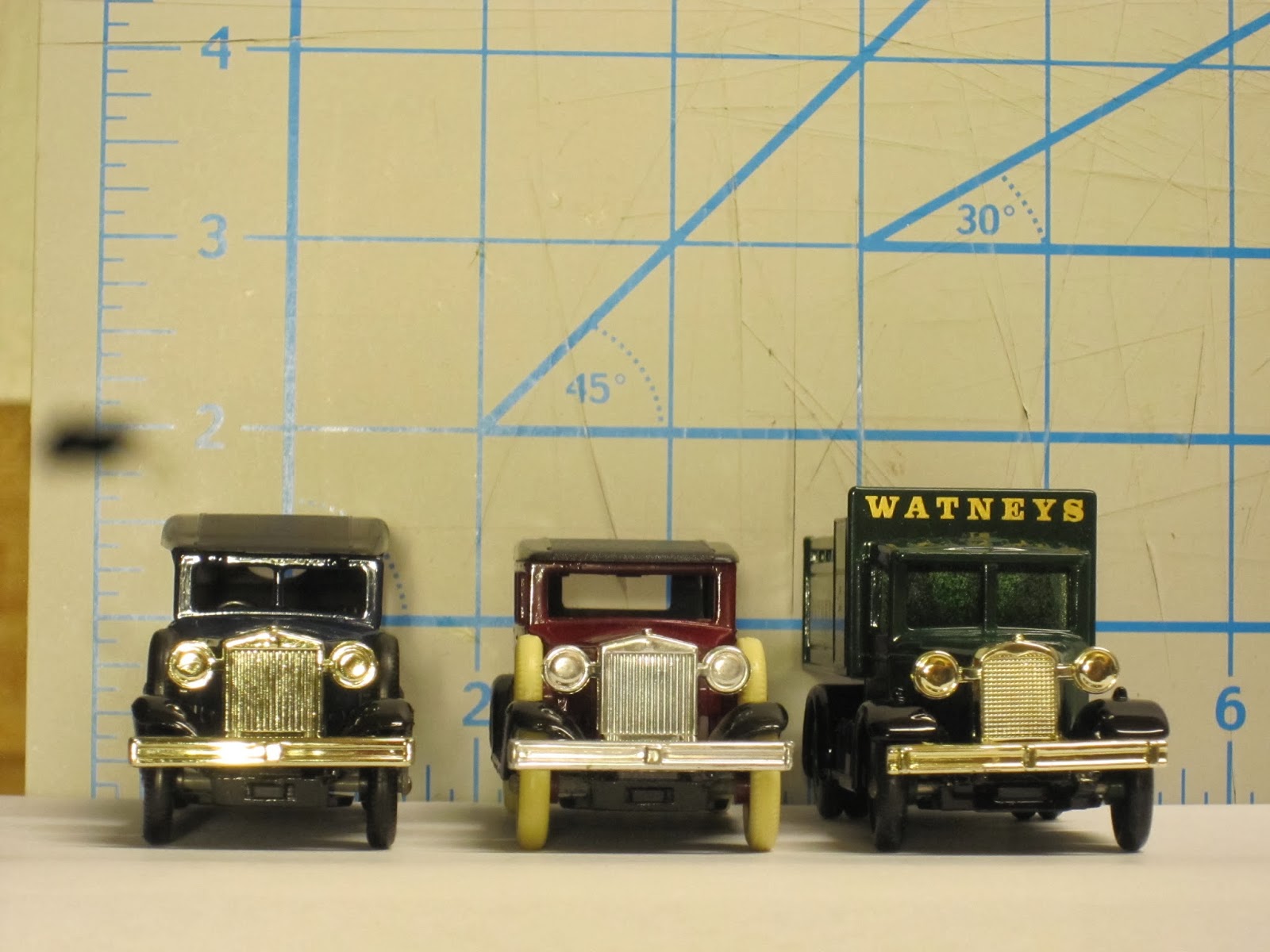 ﻿
This is a 1931 Phantom II Limousine.  As you can see, the gentlemens' heads are going to be at or slightly above the roofline.  So I would say even though the Lledo Phantom seems slightly small at first compared to the Artizan figure, it's actually not a bad match.
﻿
﻿ Here is a 1925 Silver Ghost Torpedo.  Unfortunately the only person standing right next to it is a girl, but the adults in the background appear as if their heads would be at or slightly below the roofline.  So I would say the Lledo car is about right for the Artizan figure and maybe slightly big for the Musketeer figure.