Gundam: Titans vs. AEUG Amongst the Wreckage

So my youngest has been itching to give the Gundam Collection 1/400 Tactical Battles system a go and today we tried our first battle.  He decided he wanted to field the Earth Federation Titans and I went with the Anti Earth Union Group rebels. Being new to the system, we used the simple rules and ignored formations and New Type actions. 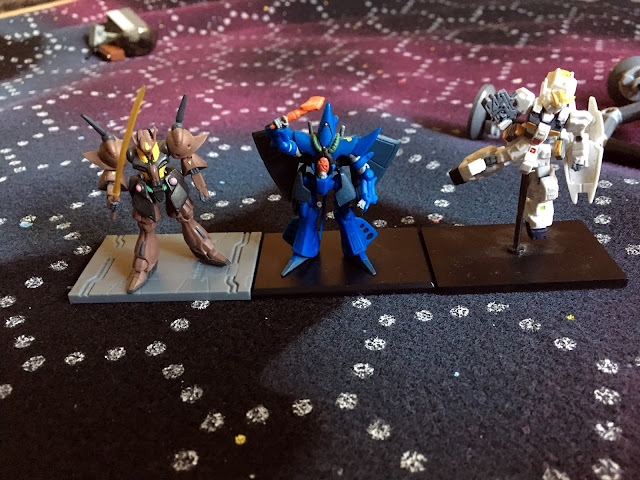 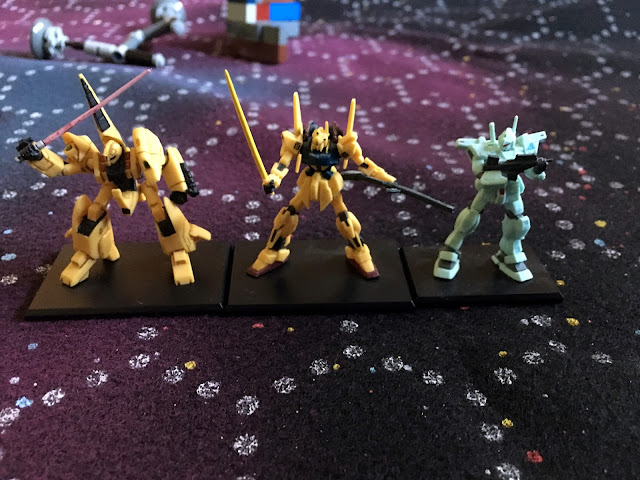 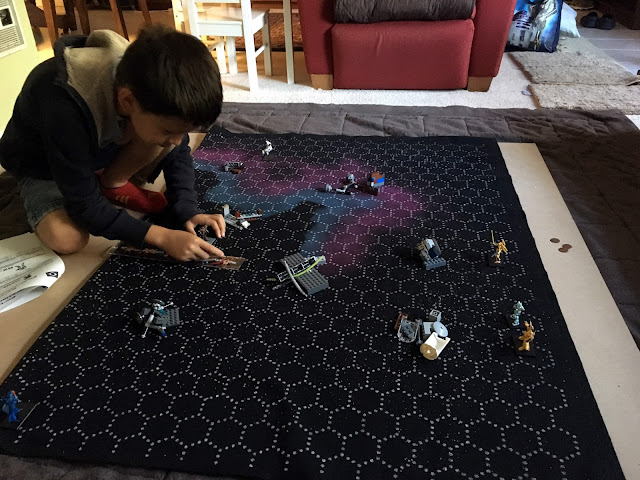 The battlefield was an orbiting debris field  from a destroyed space station.  The Titans spread themselves across the battlefield, while the AEUG decided to stay close together and try to pick off the enemy mobile suits one by one. 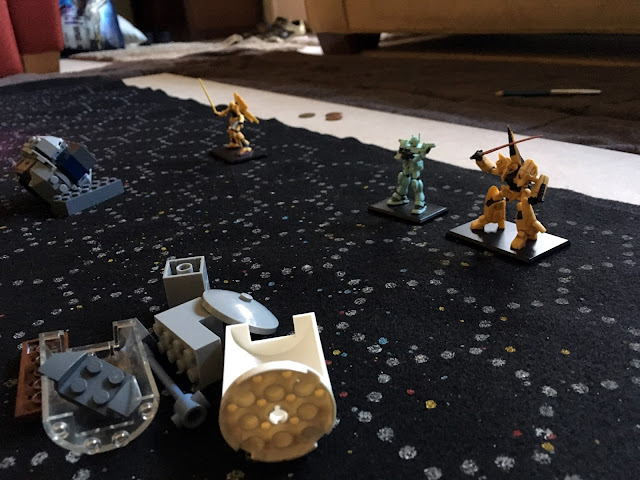 The AEUG were the more aggressive at the outset, rushing forward while the Titans' Gabthley hid in the wreckage and waited. The Methuss charged the Hambrabi, but came up short and was unable to deploy any weapons. 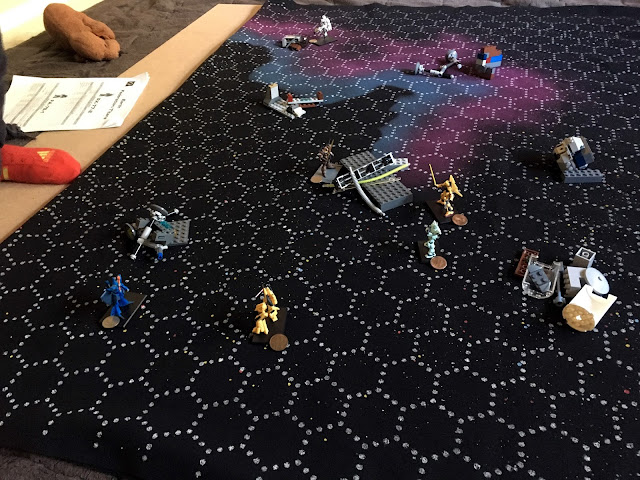 The Methuss quickly paid for this mistake.  The Hambrabi scored a critical hit with its beam gun, and the damage was severe enough to destroy the Methuss in a single turn. 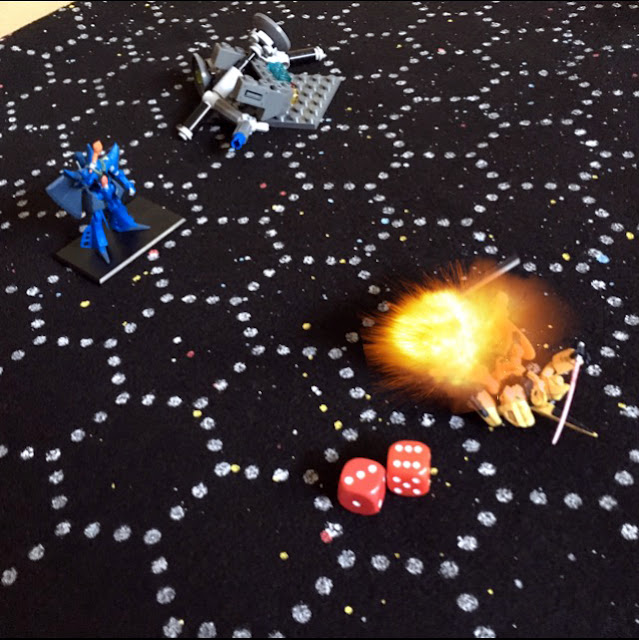 The Gabthley turned to face the arriving AEUG Hyaku Shiki, while the Hazel Custom in the background rushed to support the Gabthley. The Gabthley was unable to do any damage with it's beam saber, while the Hyaku Shiki reduced it to half strength with its counter-attack. 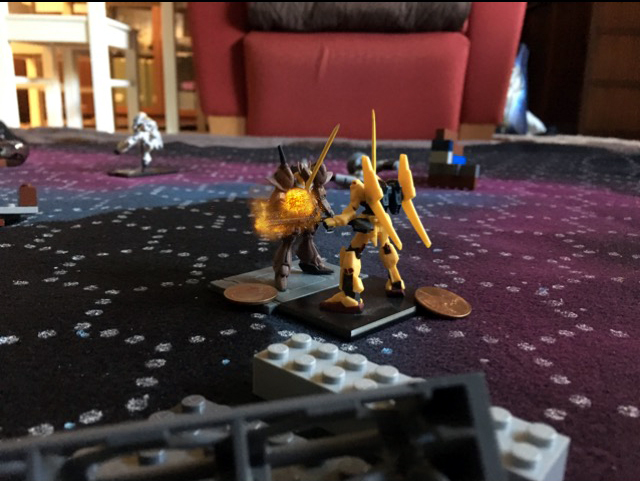 The Gabthley managed to disengage and retreat, allowing the Hazel Custom to take a shot at the Hyaku Shiki, but it was a critical miss. 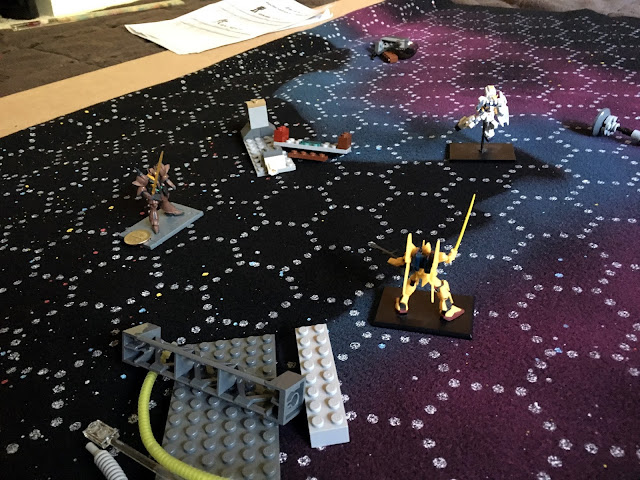 The GM Custom dodged the fire from the Hambrabi and caused some damage with its machine gun. 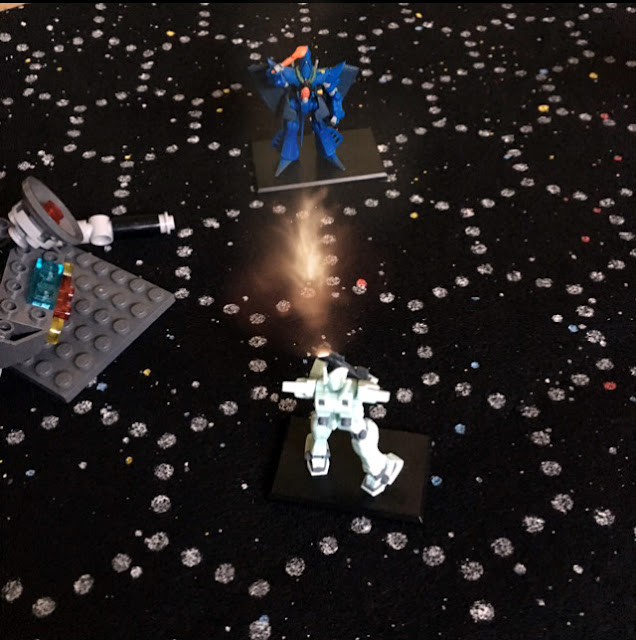 The Hazel Custom made up for its earlier miss with a critical hit on the Hyaku Shiki.  The damage was severe, with the Hyaku Shiki barely surviving. The Hyaku Shiki attempted to return fire with its bazooka, but missed. 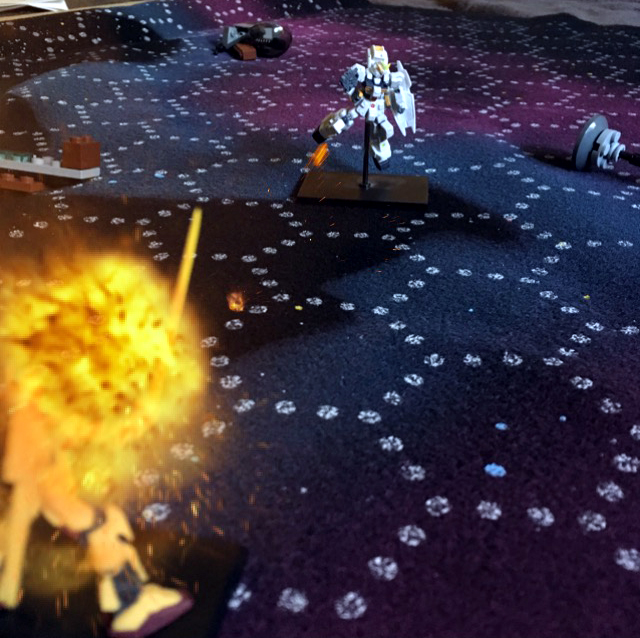 The AEUG's GM Custom continued it's attack on the Hambrabi, with the Hambrabi and Gabthley unable to do any damage in return. 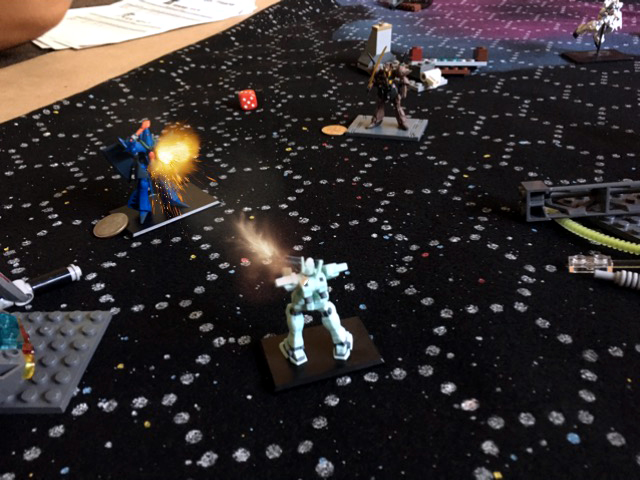 The Hazel Custom charged the Hyaku Shiki hoping to land a death blow, but though nearly crippled, the Hyaku Shiki evaded the attack and delivered a damaging counter-attack with its beam saber in response. 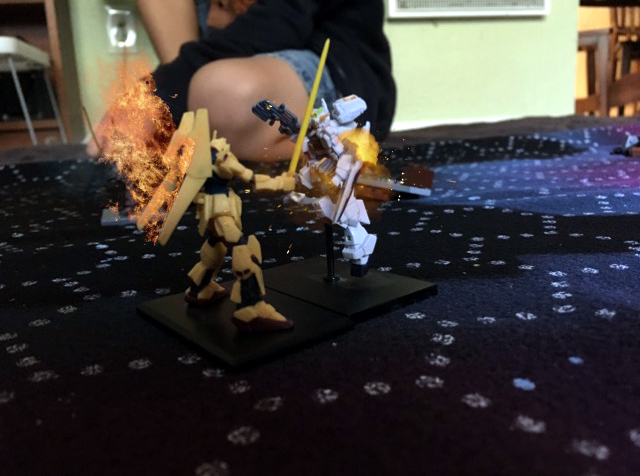 Being stronger in melee, the Hambrabi assaulted the GM Custom with the Gabthley in support. The GM Custom took damage and had no melee weapons with which to respond. 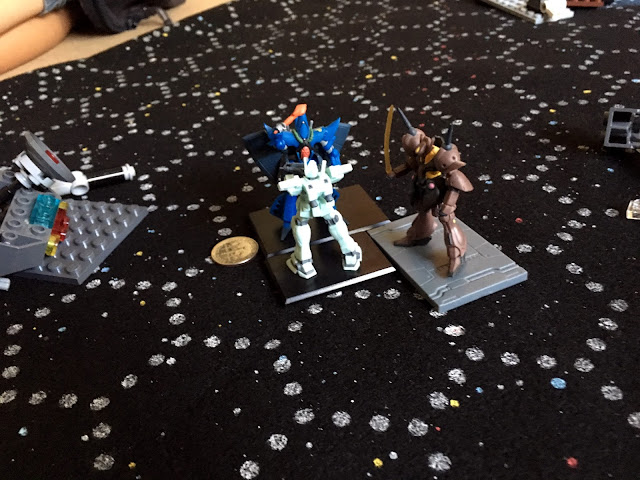 In response, the GM Custom successfully disengaged from the hand to hand combat, but was unable to do further damage to the Hambrabi with its machine gun. 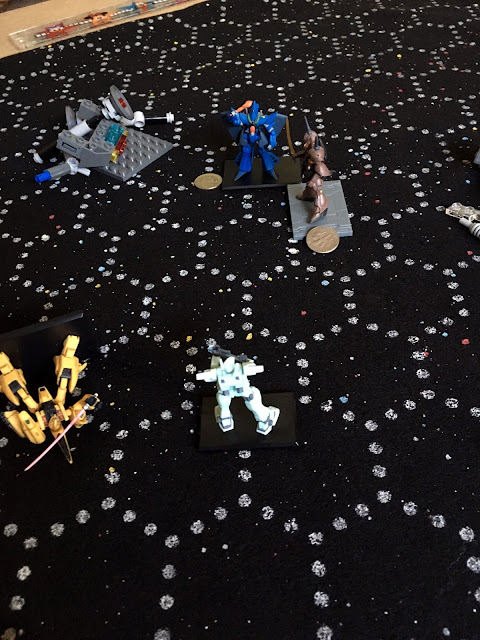 The Titans' Hazel Custom also broke of from melee and scored a shot with its beam rifle, bringing the Hyaku Shiki to an explosive end. 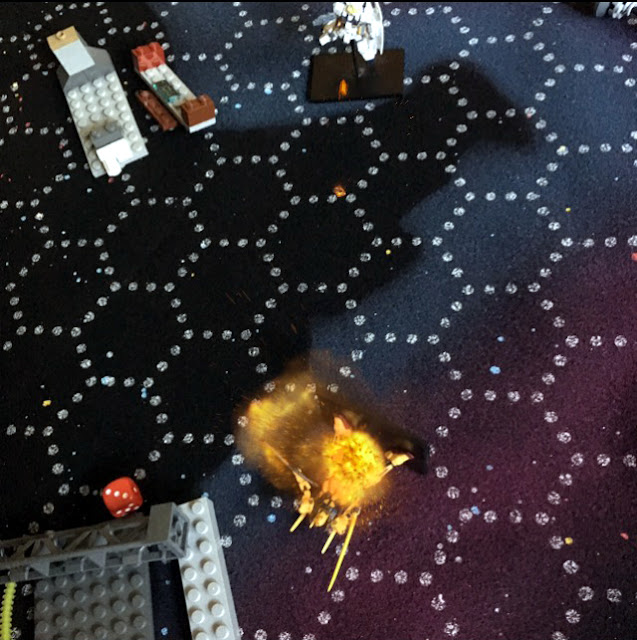 The Hambrabi and the Gabthley also scored victory, with their final shots destroying the GM Custom. 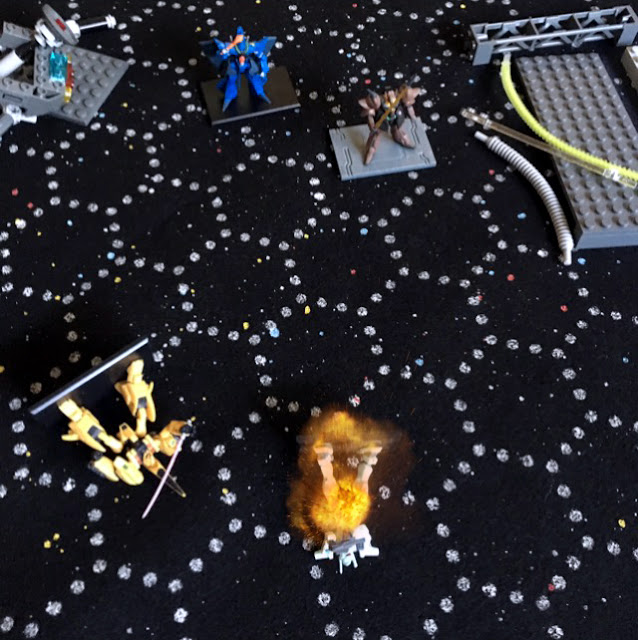 The Titans were victorious, and their commander couldn't help but revel in his win. 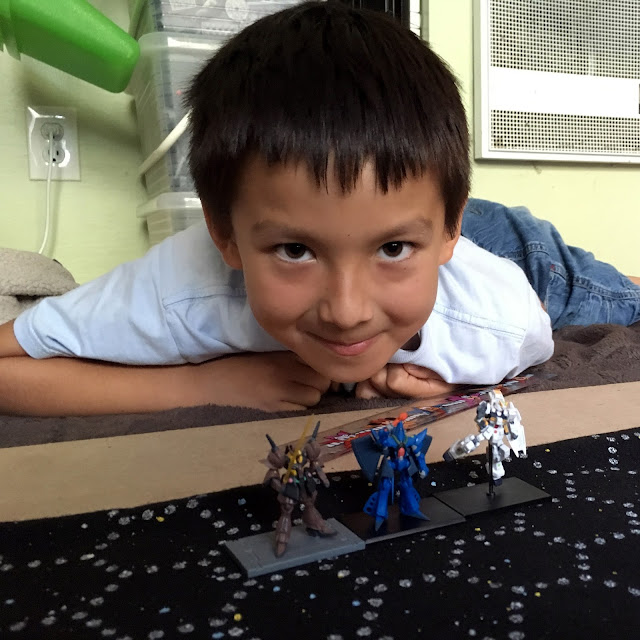 The verdict: Both my son and I had a fun time with this game.  The rules are simple enough for kids to pick up (though we discovered a few holes we needed to fix with house rules), and game play was about 45 min, which was a perfect length for him.  He's already asking when we can have our next game.

For those interested, the rubber trading figures are no longer in production, but can often be found on the second hand market. Some of the later figures never had stats released in English, but by looking up their specs on the Gundam Wiki and comparing them to other figures, you can create something reasonable from scratch.

Lastly, the special effects were added using the Effects Cam app for the iPhone. The picture resolution sadly goes down when using it, but I couldn't resist trying it out.
Posted by Major Thomas Foolery at 1:14 PM 3 comments:

My boys have recently developed an interest in the 1/144 Gundam models, which of course I'm encouraging. I loved building model kits with my father and am happy to provide the same opportunity to my kids. 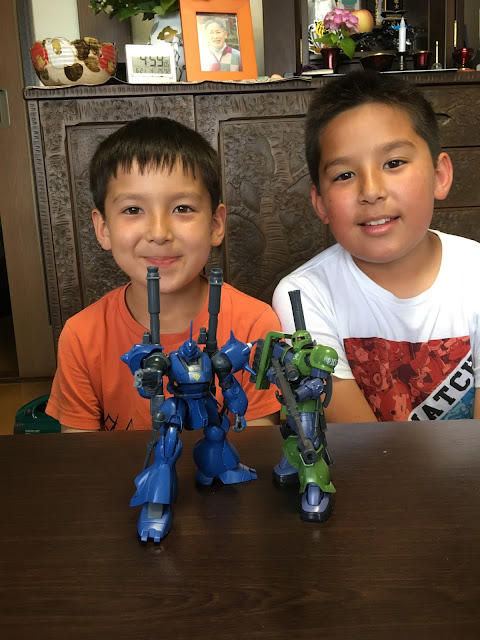 But in addition to these larger models, we've also acquired a small collection of the 1/400 rubber pre-painted figures on our various trips to Japan over the years that my boys now want to play with. 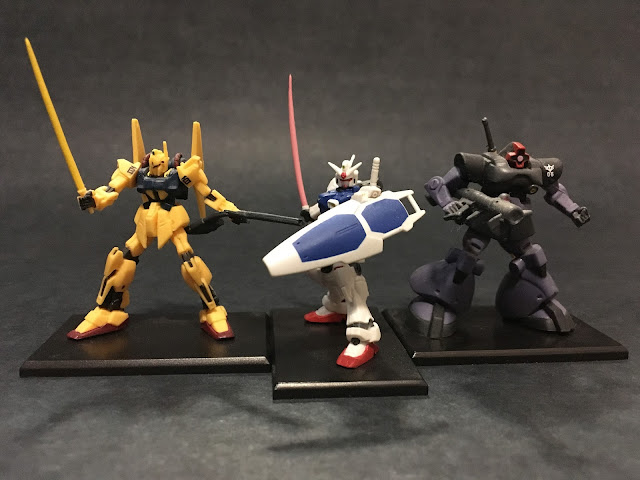 These smaller figures actually have a set of wargaming rules back in Japan, which have been translated into English by the Facebook Group.  While I appreciate the effort of these translators, I have to admit I found the Word file lacking in visual appeal and some of the wording and organization a bit confusing.

As such, I thought I'd take a stab at updating the rules before trying out a game with the kids.

If anyone else is interested in trying out my updated version, You can access it here: Gundam Collection 1/400 Tactical Battles Rules.  Please note that it doesn't have the stat cards for the various figures.  These still need to be downloaded from the Facebook Group.

Posted by Major Thomas Foolery at 2:49 PM No comments: