To provide another opponent for my Japanese army, I've decided to expand into Burma with a British Commonwealth force. While the white Chindit and Gurkha troops get most of the attention, I wanted to feature some of the lesser well known troops that also fought there. To start with, my first units will be from the 81st (West African) Division. 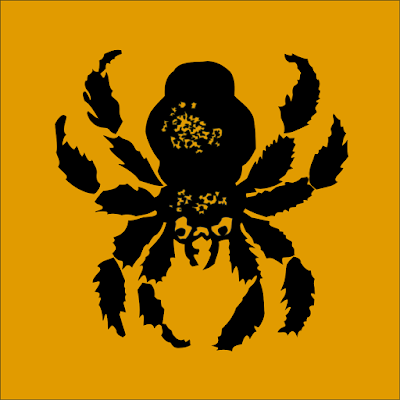 Division Insignia. Source: Wikipedia
These troops originated from the Gold Coast (Ghana), Gambia, Sierra Leone, and Nigeria, with some fighting the Italians in Ethiopia before arriving in India in 1943.  Troops originally arrived in Khaki Drill, but switched over to Jungle Green as supplies became available. 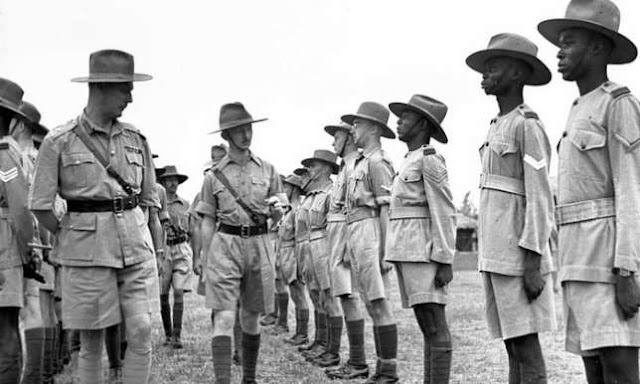 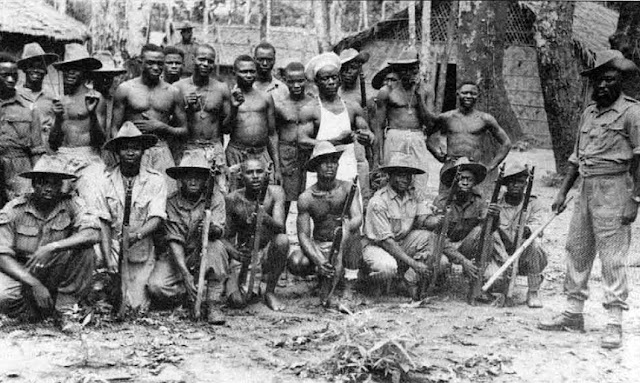 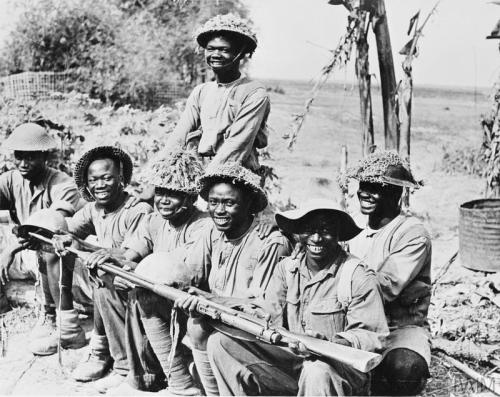 To build my troops, I used the Warlord Games Commonwealth Infantry plastic set, with some bits from the 8th Army and British Infantry plastic sets. For the heads, I primarily used the Australians, as I figured the slouch hats were close enough at this scale. A few heads in helmets were mixed in, along with some bodies in trousers, to add a bit more variety. 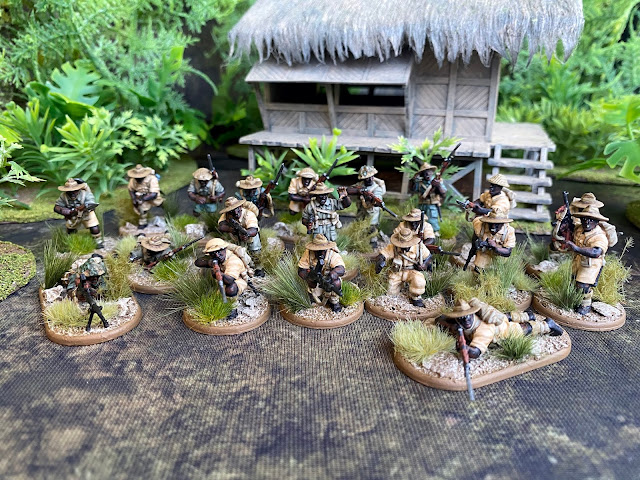 The first infantry section I've assembled is meant to represent a newly arrived unit that has not had a chance to be reequipped. From my online research it seems like green helmets were more commonly seen in Asia, but as one of the above photographs shows a trooper (left side) with a light colored helmet under his netting, I felt it was feasible to throw a sand colored one into the mix. 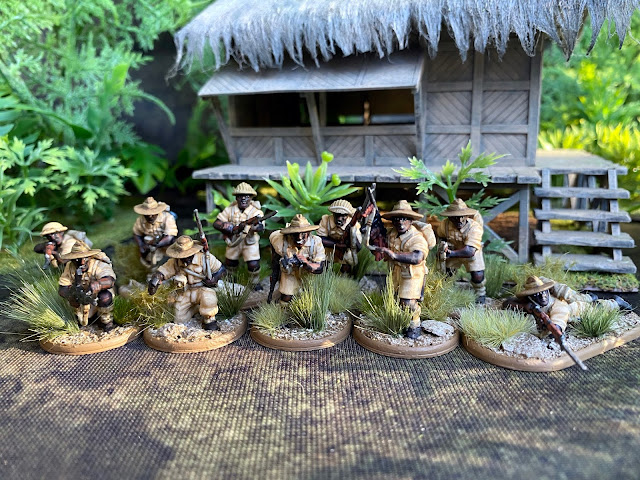 The second section is one that has been in country for a bit, and has either self dyed some of their clothing or been partially reequipped with jungle green gear. I've also mixed the webbing colors, with some soldiers painted using the original Vallejo 884 Stone Grey as a base, and others now having 988 Khaki as a base. 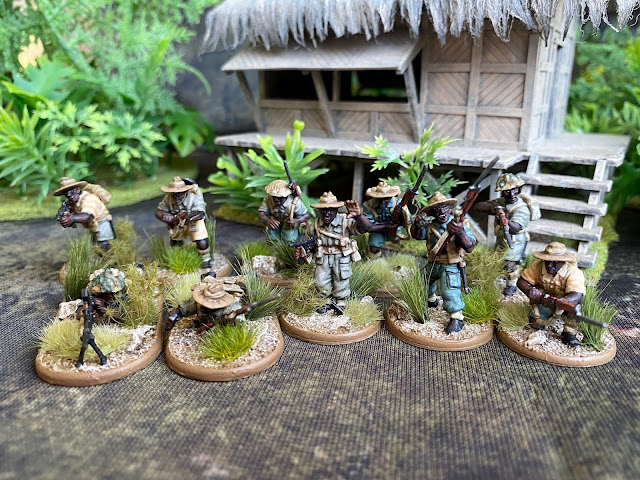 Trying to pick an appropriate "jungle green" proved challenging, as it seems there was a quite a bit of lot to lot variability, and problems with the color fading.  The dark green recommended by Warlord for chindits seemed to be factory fresh and inappropriate for the field, and others have recommended either a green grey or blue green grey color instead. Using a cast photo of "It Ain't Half Hot Mum" for reference, I opted for Vallejo 886 Green Grey and 920 German Uniform as my bases. 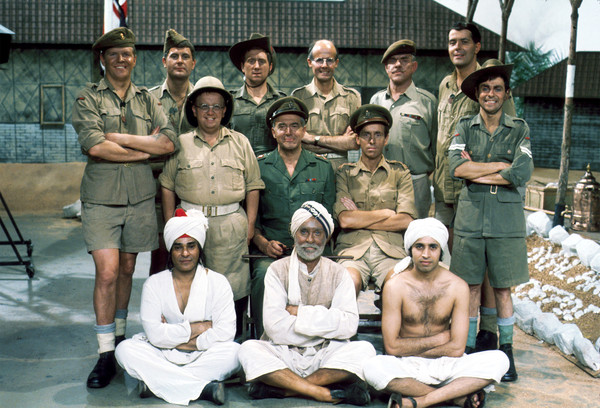 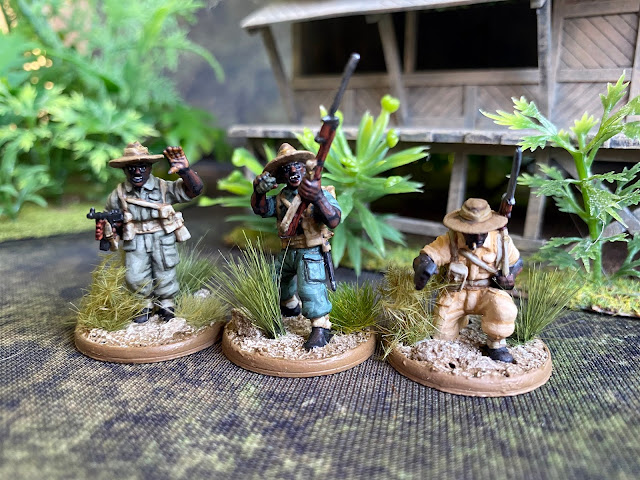 As mentioned before, I mixed in a couple of bodies from the British Infantry plastic set to add a bit more variety. The areas to attach the arms are different between the sets, and while I could get independent Commonwealth arms to look pretty good on the Infantry bodies, the combined arms did not work so well. The long sleeved Infantry arms are also much more slender than their Commonwealth counterparts, so you cannot use them on Commonwealth bodies without it looking odd.

Compared to the Plastic Japanese set Warlord produces, I did not think this kit was as good.  The mold lines seemed more pronounced in the Commonwealth (and 8th Army) kit, and I felt that apart from the heads, the Commonwealth kit had less viable options for variety in it (there were a lot of strange arms that weren't so useful). Additionally, not all the arms sat flush on the bodies and some of the webbing limited the positions you could place the arms in.  This resulted in me having to do a fair amount of filling and trimming. But that said, I think you can still get a fairly decent force on the cheap by going with the plastic kits over metal.

Posted by Major Thomas Foolery at 5:17 PM No comments: