The Great Train Robbery: Back of Beyond Style

Today Steve and I put together a Back of Beyond game so we could try out the "Setting the East Ablaze!" rules from Partizan Press. Our hope had been to host a larger game for some of the historical players in the area, but it ended up being a two person affair.   However, we did get some gawkers and inquiries about the game at the shop, so hopefully we can lure some new blood into historicals in the future.

In this scenario, the notorious warlord General Ma had gotten word that the nearby White Russian outpost was due to be resupplied by train. Being short of supplies himself, he thought journeying over the border from Xinjiang to pay the Russians a visit sounded like an ideal opportunity.  Plus, a Red agent was offering to add to Ma's coffers if he could recover a secret message hidden in the outpost's orchard.

The primary objective of the game was to seize the train station, with secondary objectives being to find the secret message in the garden and to seize the government office (white building) and prevent radio communications.  The Chinese forces started their dawn raid from the lower right of the table, while the rapidly awakening Russian and French expeditionary forces started at the outpost in the upper left. 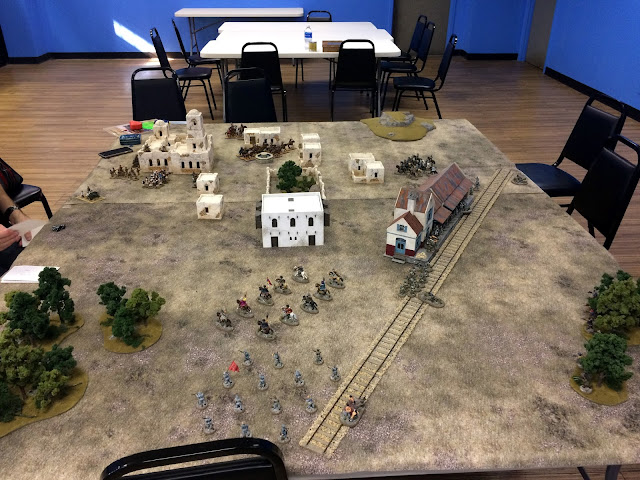 The station was seized by the Chinese in the first round, and Chinese and Tibetan cavalry raced forward to stall the enemy so the Chinese infantry could move on to the government office and orchard unmolested. 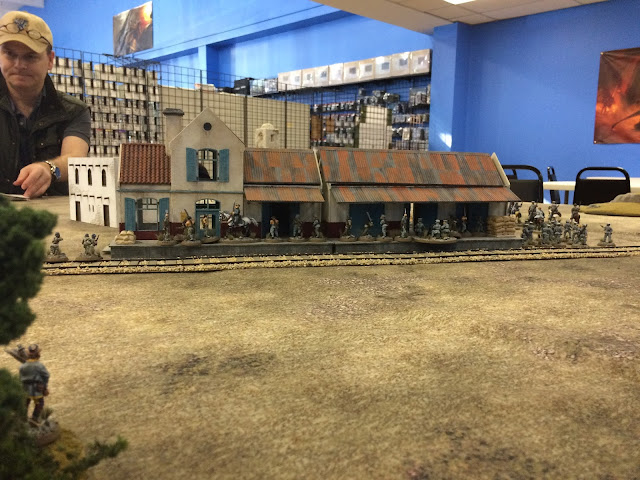 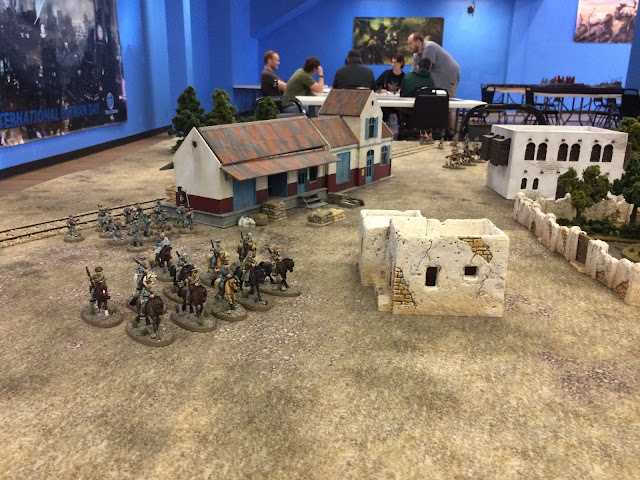 Transbaikal and Daghistani Cossacks raced to attack the Chinese cavalry. Meanwhile, French marines worked to position themselves and their heavy machine gun at the outpost. 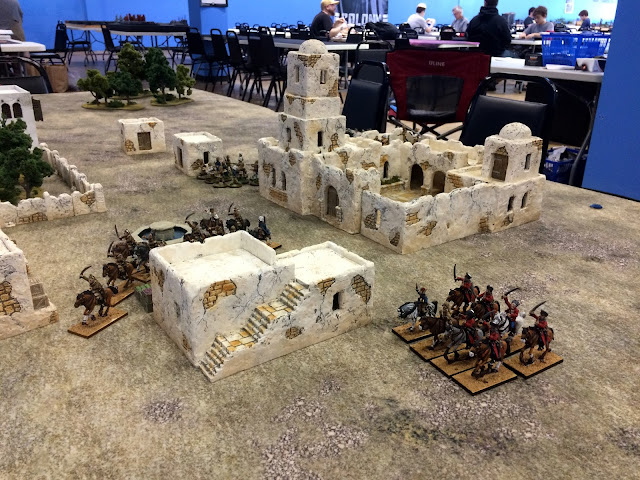 Tibetan cavalry rushed across the field to destroy the Russian artillery before the field gun could start pounding the Chinese infantry.  Luckily the artillery crew proved to be poor shots and failed to do any damage to the advancing Tibetans. 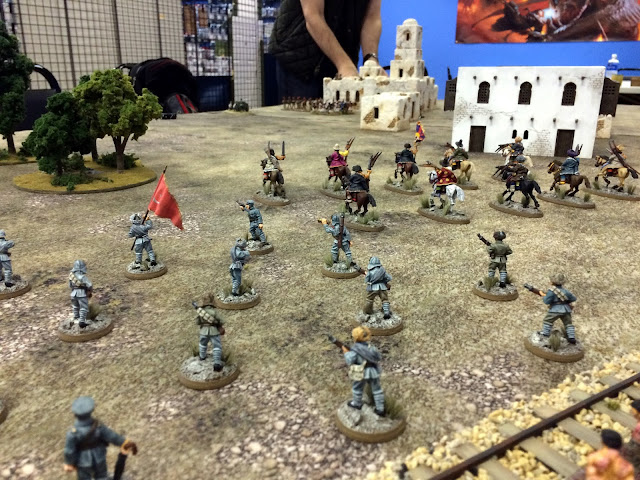 The first unit of Cossacks made a tactical error, bunching up as they prepared to charge the Chinese and forgetting about the mortar team watching them from the train station.  Half the unit was wiped out by a well delivered round. 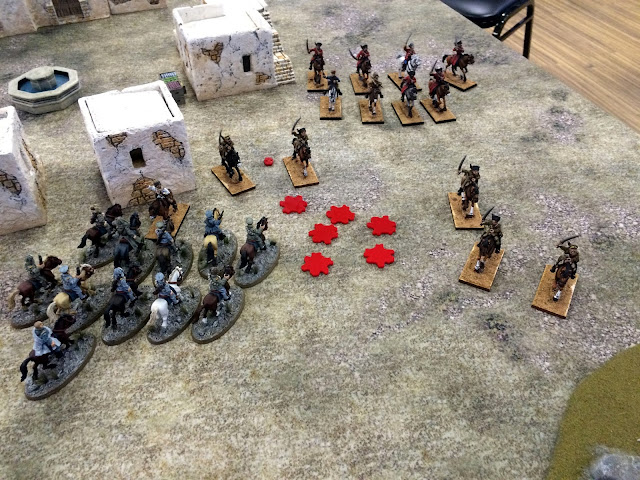 The Chinese heavy machine gun moved itself into position on the station loading docks, while "Dare to Die" troops under the supervision of General Ma secured the station.  The general's body guard unit raced towards the orchard while the German trained troops prepared to move into the government office.  French marines huddled behind the orchard walls, trying to decide which of the two objectives to seize. 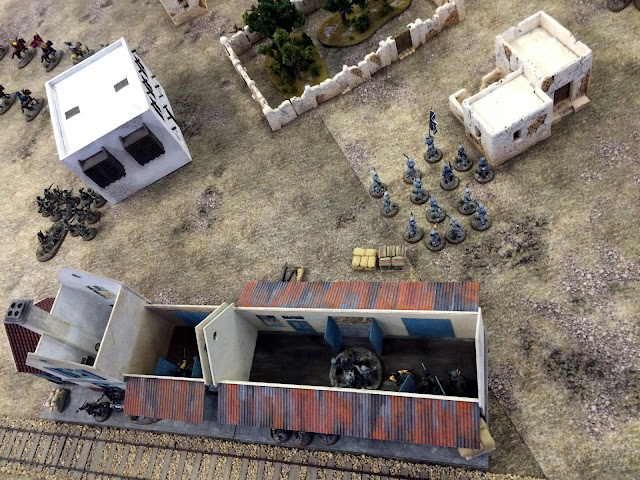 The Tibetan cavalry ignored the nearby enemy infantry and continued their determined charge for the field gun.  The nervous Russians manning the gun still were unable to hit the incoming Tibetans. 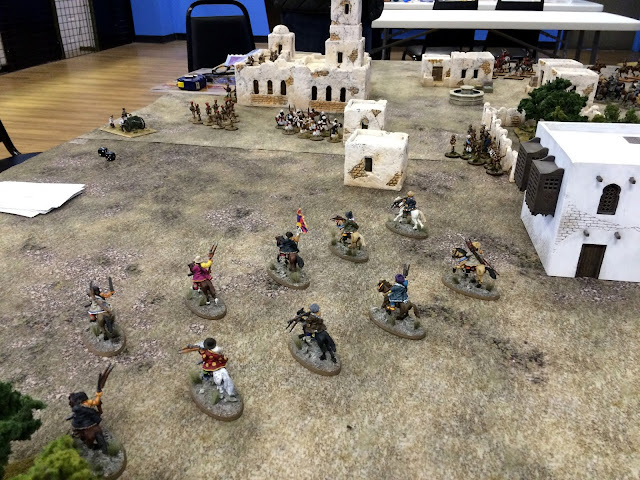 In the middle of the battle, the train finally arrived.  Stunned by the chaos, the engineer slammed on the breaks, while his Russian escorts failed to get off any shots. 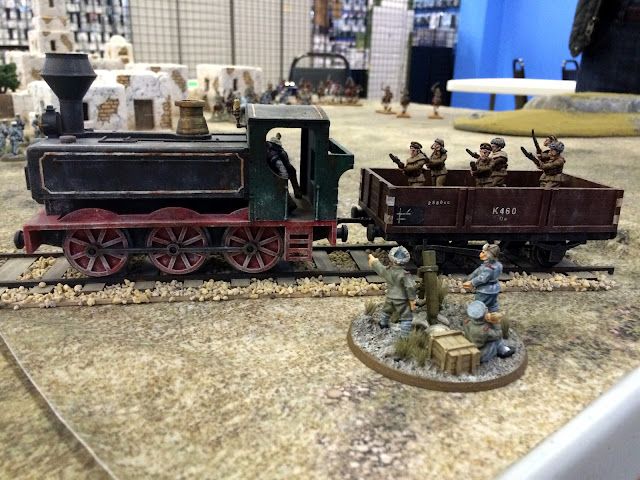 The Chinese cavalry made short work of the mortar attack survivors. 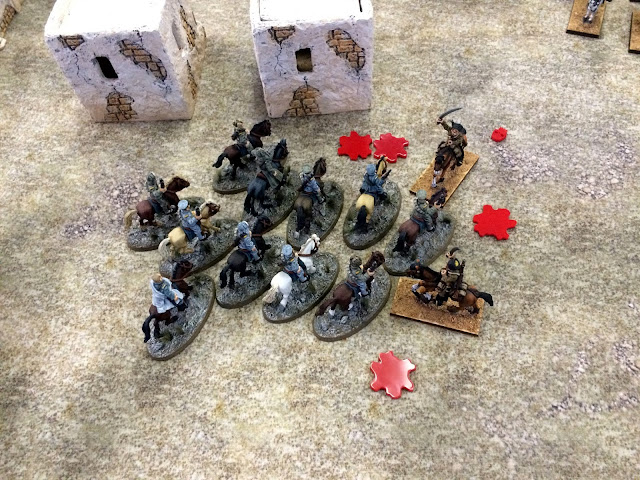 In their single-minded focus on the field gun, the Tibetans paid a heavy price as they came under fire from French and Basmachi infantry. Despite losing almost half their number, the Tibetans did not falter and succeeded in destroying the gun. However, the infantry later completed their carnage and there were no Tibetan survivors. 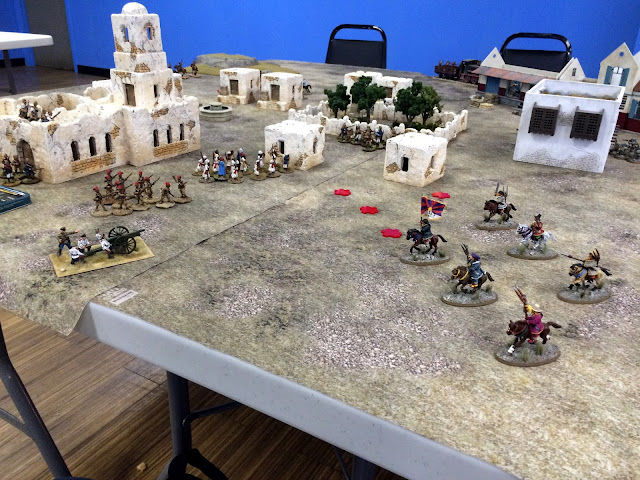 The "Dare to Die" troops decided to exit the station buildings and prepare a fitting welcome on the platform for the arriving train. 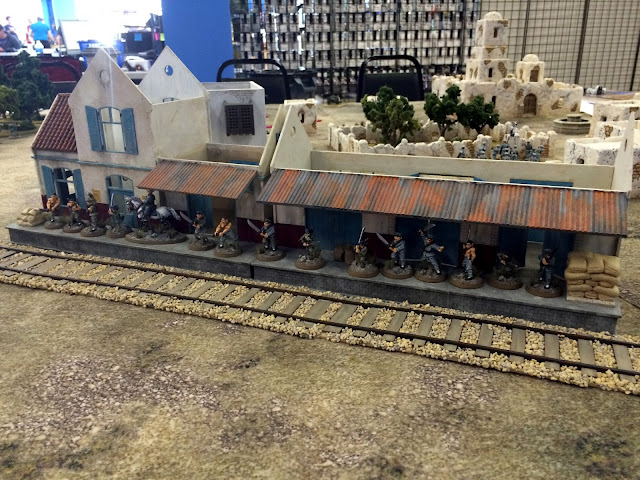 Elsewhere, the French marines hopped the wall into the orchard and prepared their own welcoming committee for the the Chinese when they opened the gate. 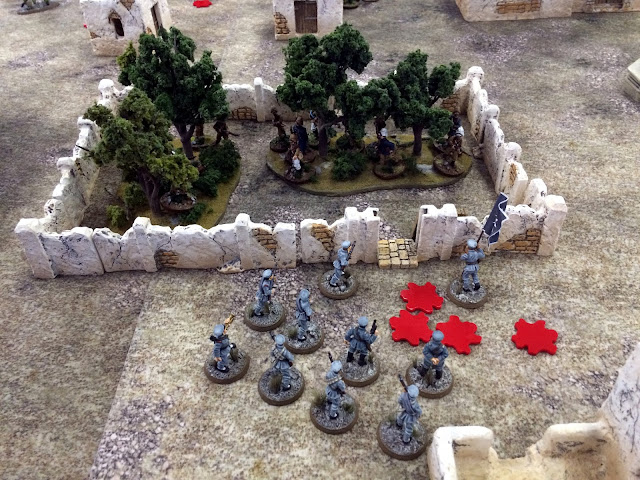 The second unit of Cossacks charged into the Chinese cavalry, and a pitched battle lasted for several rounds without either side being able to gain an advantage. Colonel "Scarface" Hu was eventually shot by a French officer accompanying the Cossacks, but instead of falling dead, the would enraged him so much that he was able fire up his men and kill off all the Cossacks. The surviving French officer rushed back to the outpost. 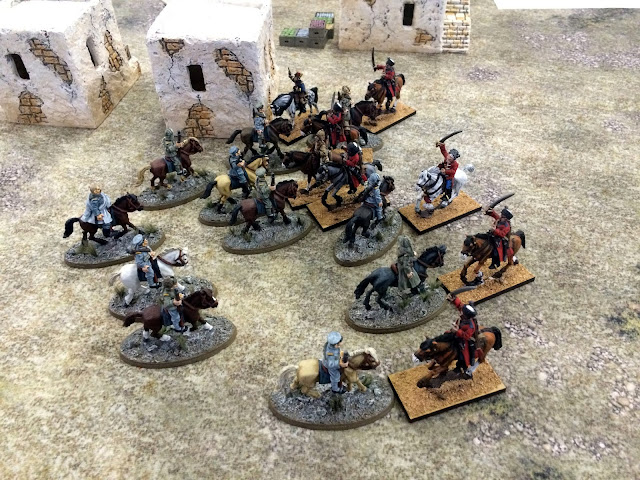 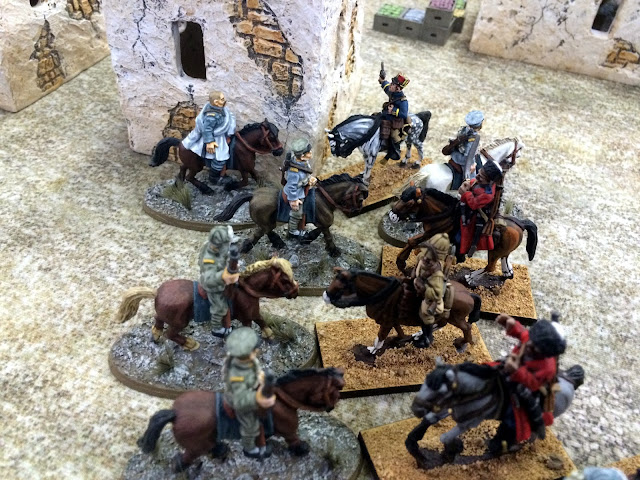 The Chinese swarmed into the orchard and killed off four of the defending marines with bombs, but the surviving French pushed back and killed off the entire Chinese unit. 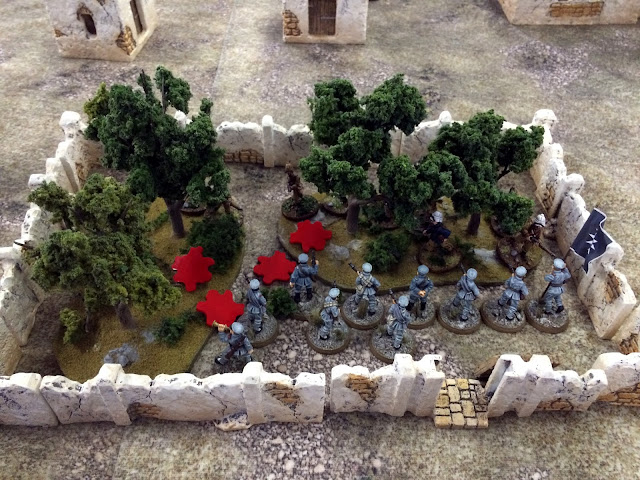 As the train came to a stop in the station, the Chinese fanatics swarmed it and lobbed bombs into the cars, killing all but two of the Russians.  The two surviving  Russians attempted to surrender, but the "Dare to Die" troops do not believe in taking prisoners and cut them down where they stood. 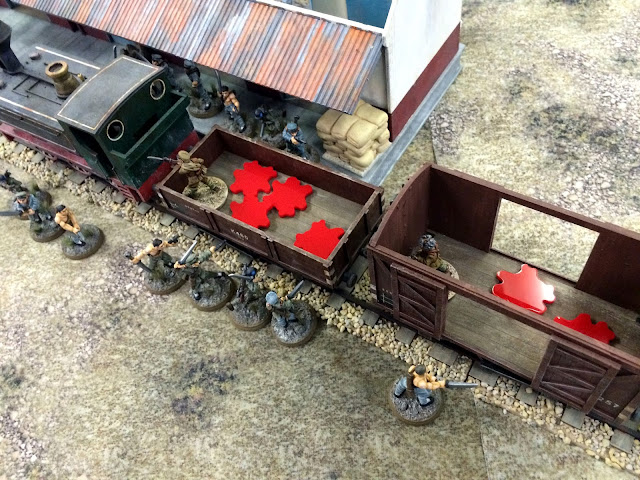 At this stage the French held the orchard and the Chinese the station and the government office. The Chinese had completed their set up of the heavy machine gun on the station loading docks and had also moved up a light machine gun to the government office, effectively setting up a killing zone for any enemy troops foolish enough to attempt to move out into the open.  Trapped behind walls and buildings, the Russian and French commanders decided their best option was to surrender and let General Ma make off with his ill-gotten gains. 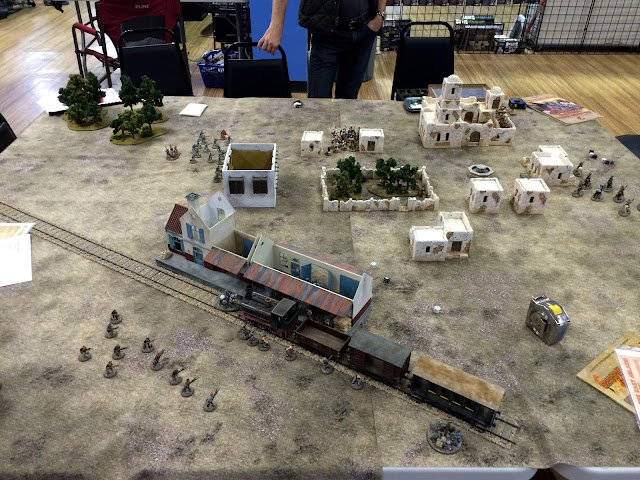 We enjoyed the new rules and the scenario, but over the course of the game we realized we had made some significant mistakes in how we interpreted the rules. However, we feel that didn't impact the game too badly and are looking forward to trying something more complex by including ground vehicles and perhaps some aircraft.
Posted by Major Thomas Foolery at 8:17 PM 8 comments:

Email ThisBlogThis!Share to TwitterShare to FacebookShare to Pinterest
Labels: AAR, Back of Beyond
Newer Posts Older Posts Home
Subscribe to: Posts (Atom)