I've been painting figures for a bit now, so decided it was time to prepare some terrain that was appropriate for Mail and the western Sahel.
From the photos I've seen, a lot of the soil has an orange or pink undertone, so I am using Deep-Cut Studio's badlands mat as my base. As fighting over mostly open terrain would be rather dull, I decided a village was really needed to keep things interesting on the table. Most adobe buildings currently in production have a Middle Eastern style and aren't really quite right for the styles seen in western Africa. I spent a lot of time searching for options and thought I'd have to scratch build, but was lucky enough to finally stumble upon Fogou Models in the UK. Their line was perfect for what I wanted.
The prices weren't cheap and shipping to the US was expensive (the resin is heavy; my village came in at 4kg), but the products were wonderful and they threw in a few extras, which was great.  Casting was top notch with minimal bubbles and clean up. There was no release compound residue, so they took primer and paint well (didn't even need to wash them). I was also highly impressed with the surface details in the stucco.  Doors came separately, and there were also lots of add ons available, so you can get fair amount of visual variety from the kits. The kits also had lift off roofs with interior detailing. If there was one downside to the line, it would be that it runs on the smaller side.  Standard 28mm miniatures on thin bases have their heads right at the top of the door frames, so heroic 28mm and the newer 32mm figures will look over-sized, particularly on a thick base. 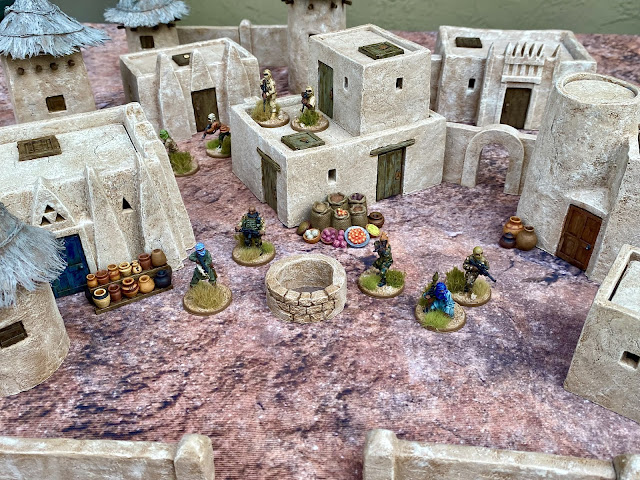 Large Adobe 1C runs 13x9cm and will hold 6 miniatures on 25mm round bases. 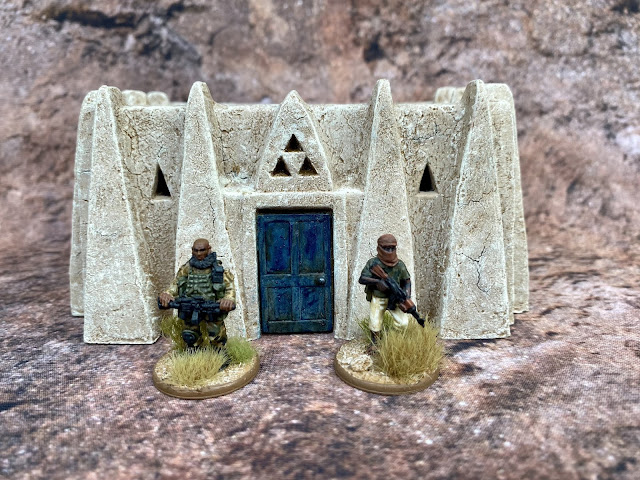 Large Adobes 1B and 1E are actually Medium Adobes 2A and 2B with Small Adobes 4E and 4F on the roofs. It's cheaper to buy them as the sets rather than the individual buildings.  For my buildings, I bought an add on frontage for one and some external staircases. The base buildings run 11.5x8.5cm and will also hold 6 figures. 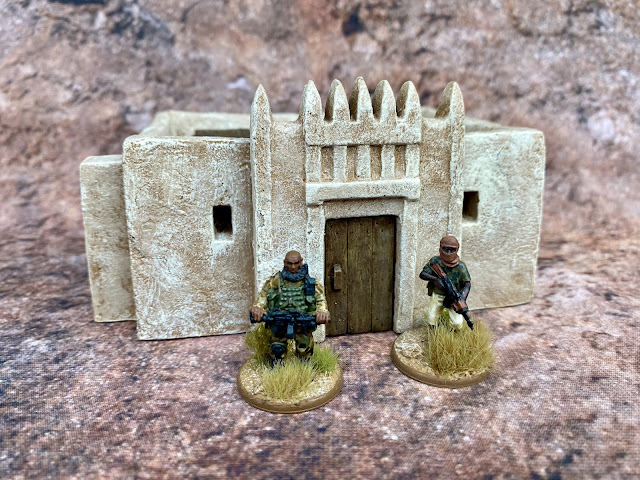 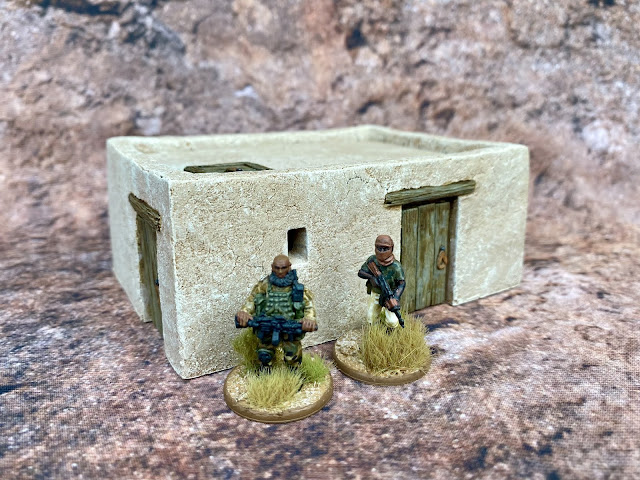 The upper levels/small adobes run 7x5cm and will hold 2 figures. 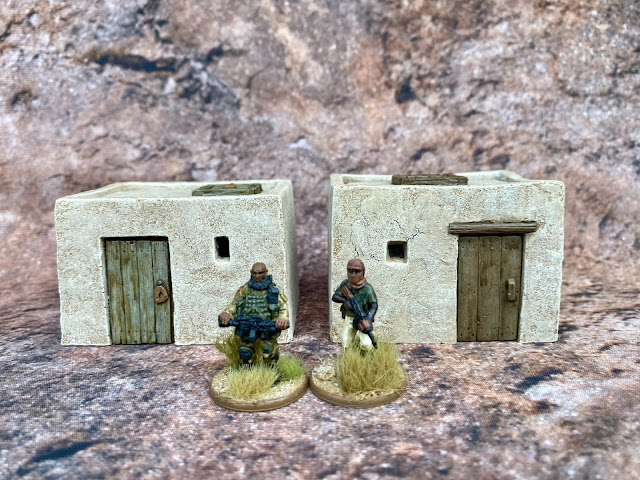 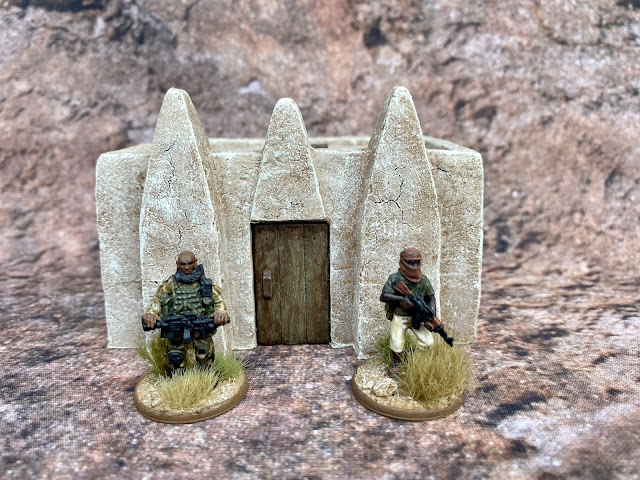 The Adobe Bakehouse has the same 7x5cm footprint seen in the small buildings for the rectangular section and a 5cm diameter tower. There is no internal floor, and you can fit 3 figures if you use the tower. 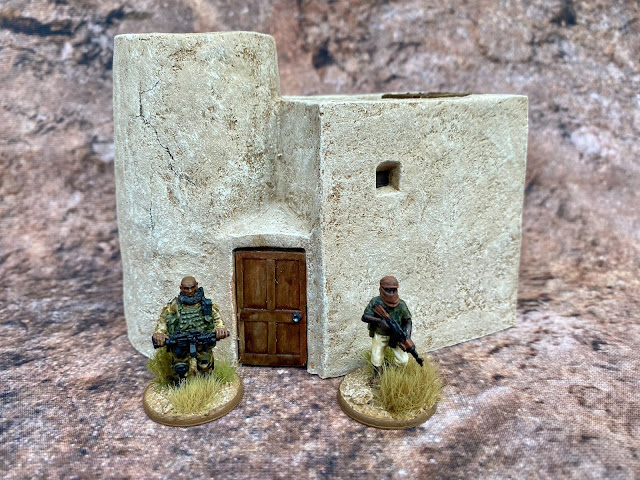 The granaries in the Medium Adobe 2A set are comprised of the same buildings in the Small Adobe section (again, cheaper to buy as a group) and are all around 5cm in diameter, with space inside for a single figure. My kits did not include the small doors or roof posts, so I'm not sure if that was an oversight or if it's how they are sold.  Regardless, it was easy to create them out of balsa wood and bamboo grilling skewers. 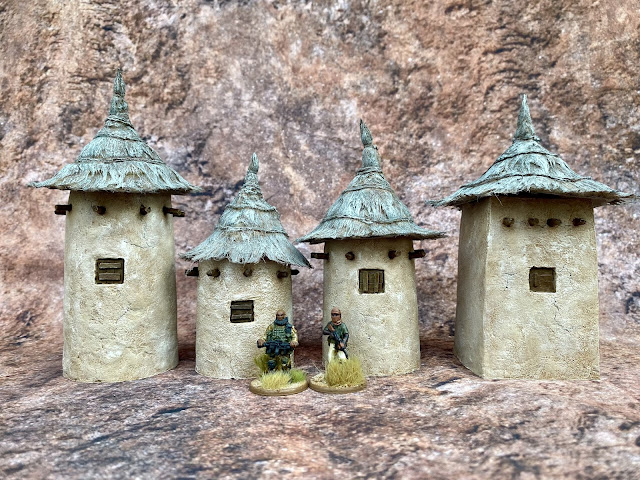 The kits themselves only came with flat roofs, but the village photos often depicted granaries with thatch roofs, so I decided to make some from scratch. These were made from stacked cones of heavy card with the aforementioned bamboo skewers used to reinforce the points. 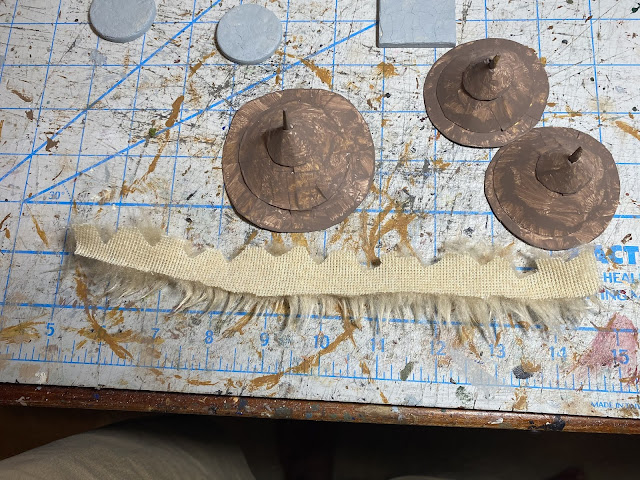 These were then covered with strips of teddy bear fur, with the tops scalloped to help them fit around the cones. To hold the fur down before the next steps, they were given a coating of Woodland Scenics' scenic cement. 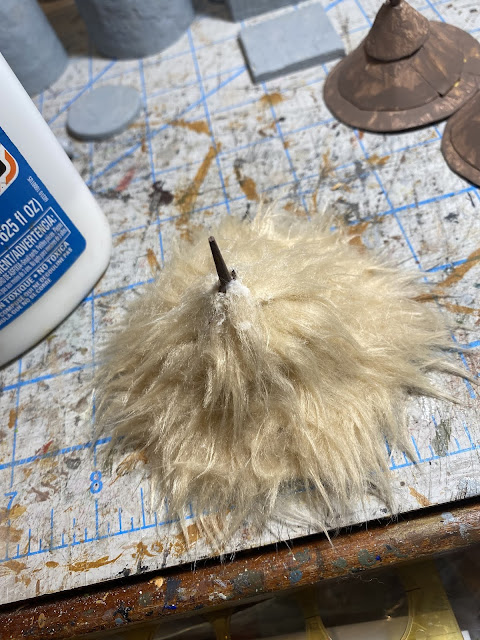 The thatch tie downs were made from braided thread and glued down with super glue, before the entire assembly was painted with various shaded of brown and gray. 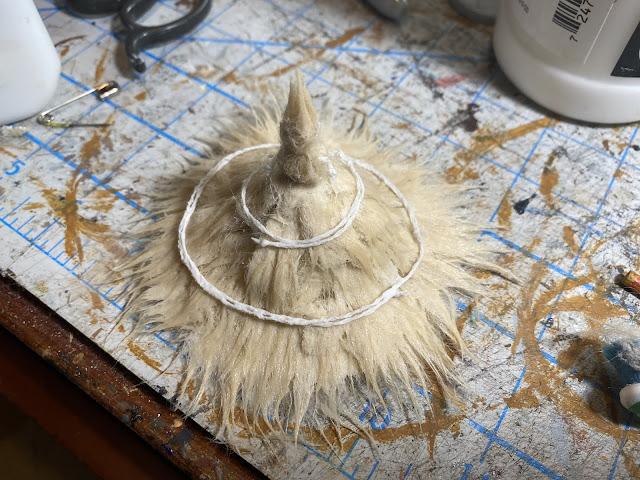 Fogou wall segments run about 8.5cm long, and this gate height gives you a good impression of the clearance for 28mm figures. Realistically, you'll need 2 or more sets to really do anything with them. 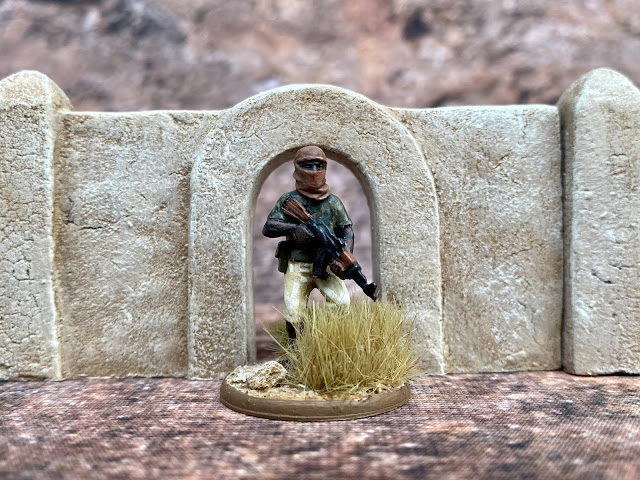 A bit of scatter terrain for the village. I'll also throw in some of my old Ainsty Castings bits and will look for some additional elements in the future. 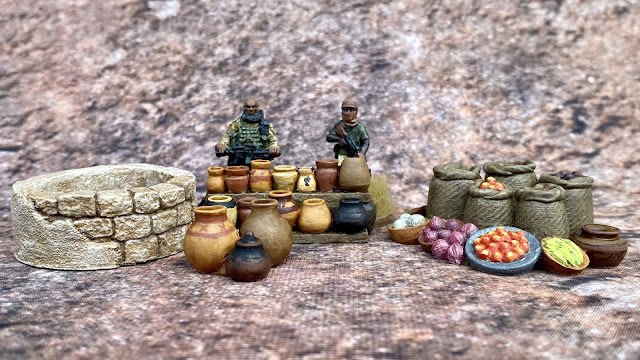 In addition to the village, I also made some rock and tree elements using bits from Woodland Scenics and Gamers Grass. 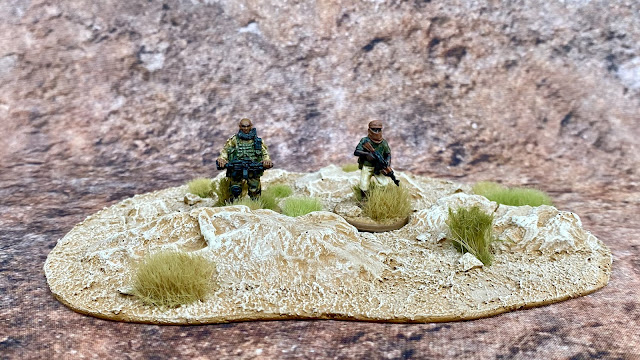 Living in a small space, I generally have to transport my terrain to play elsewhere, and I've always had problems with my trees starting to fall apart over time. As such, I tried a new tree technique this time in hopes they will last longer . Previously, I had use the large foliage clumps glued directly to the tree armature, but for this build, I first glued down large clumps of their light green polyfiber, coated it with a generous amount of Scotch Super 77 spray adhesive, and then used the finer underbrush light green clumps.  It seems to have formed a stronger bond, but the annoying bit is the glue dried a milky color rather than the promised clear. As such, you can see webs of white between the leaves.  There's not much I can do at this stage, but my hope is they will look like fine branches in the top of the trees. 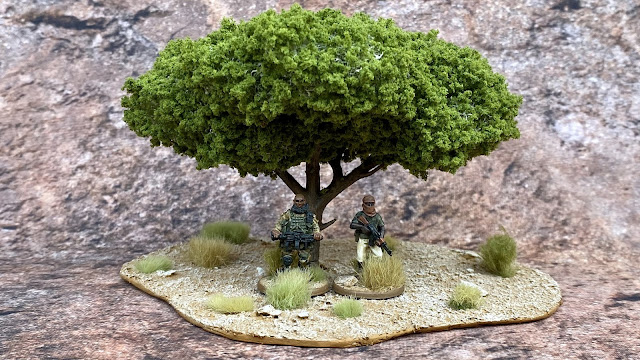 Lastly, since this is a farming village, I needed something for them to farm. Looking online, cotton is a major export crop for Mali, and corn is a food staple, so I thought those were good places to start. Both crops were produced by JTT Scenery Products.  The local shop only had HO scale cotton in stock, but I think the size looks ok (I have them mounted on thin  plasticard, so I don't think they sit a deep as intended). 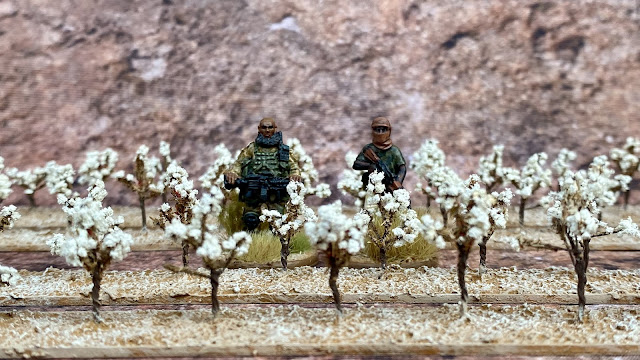 I was able to find the corn in O scale, but did end up trimming some of the bottoms off the stocks to keep them from looking too big. 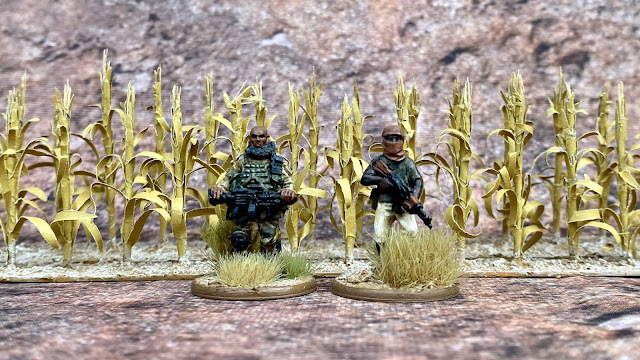 I might still pick up a few additional odds and ends, but I think this will give me a good skirmish table for my modern games, and I could also see it being pressed into service for my 19th century African games as well.
Posted by Major Thomas Foolery at 2:30 PM 4 comments:

Work continues on my French Foreign Legion for Mali and the Sahel. As before, these are a combination of Eureka Miniatures and JJG Print 3D figures. To help distinguish the combat groups on the table, I've done one with tan body armor and another with green. Webbing remains a mix of both colors. Painting recipes are on the previous post. 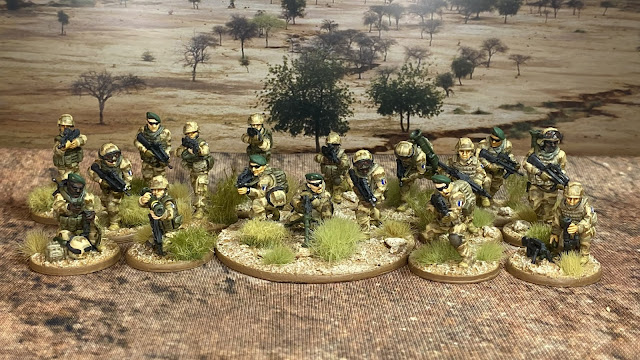 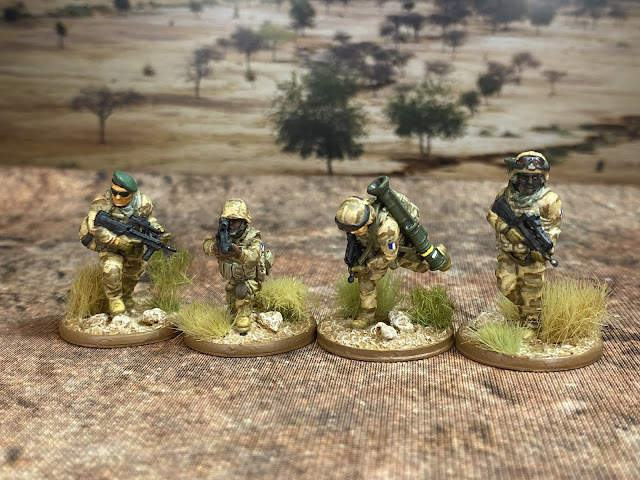 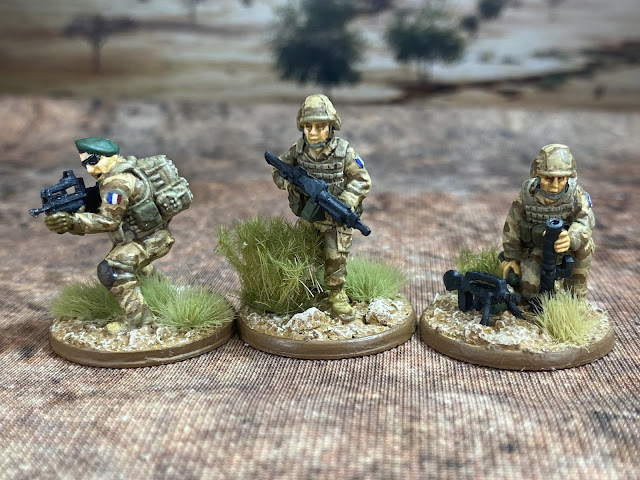 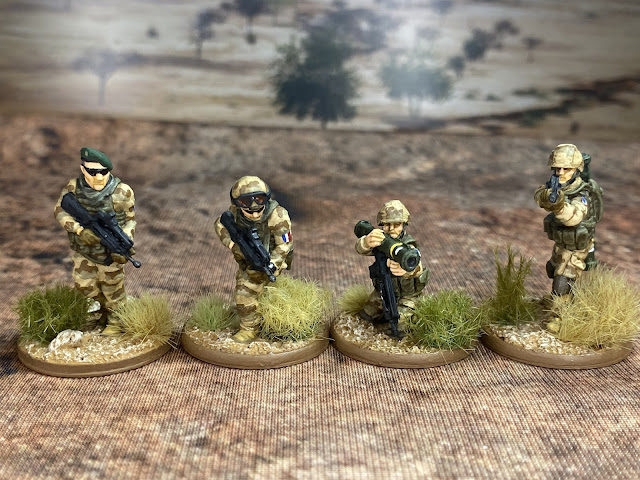 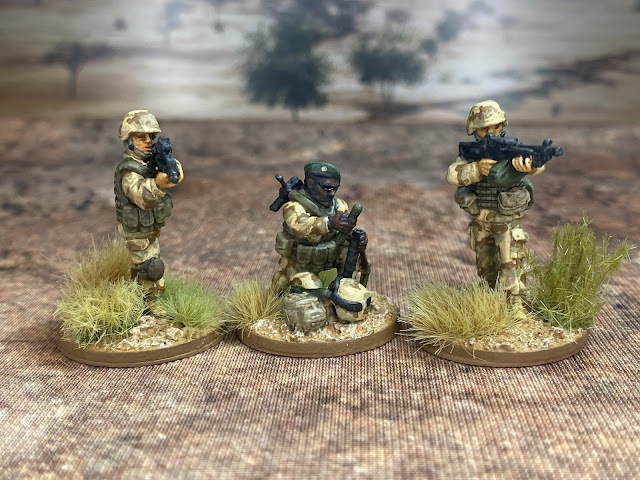 For the FN MAG 58 machine gun, I've opted to base it as a team rather than as individuals as is standard in Bolt Action.  I had some challenges with the primary gunner, both in terms of painting in all the nooks and crevasses, and in accidentally  breaking some of the finer details off during painting. He also didn't want to sit flat on the base, so had to hide some of the gaps with basing details and the other figures. But in the end, I think I got him reassembled well enough was happy with the final product. 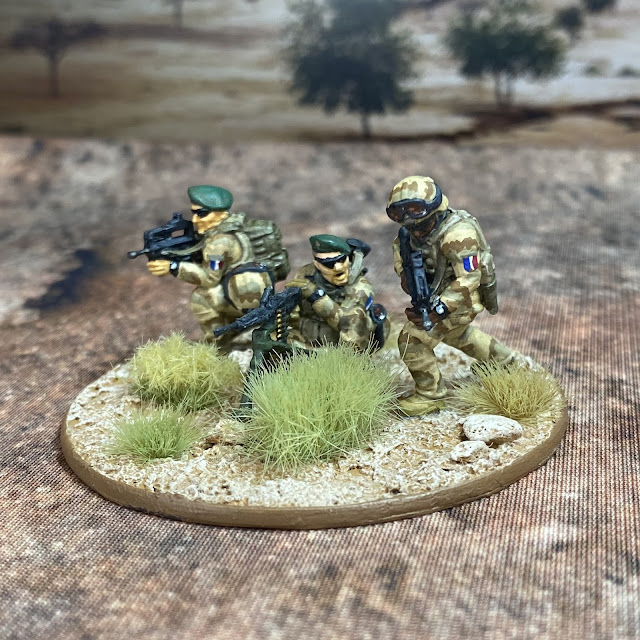 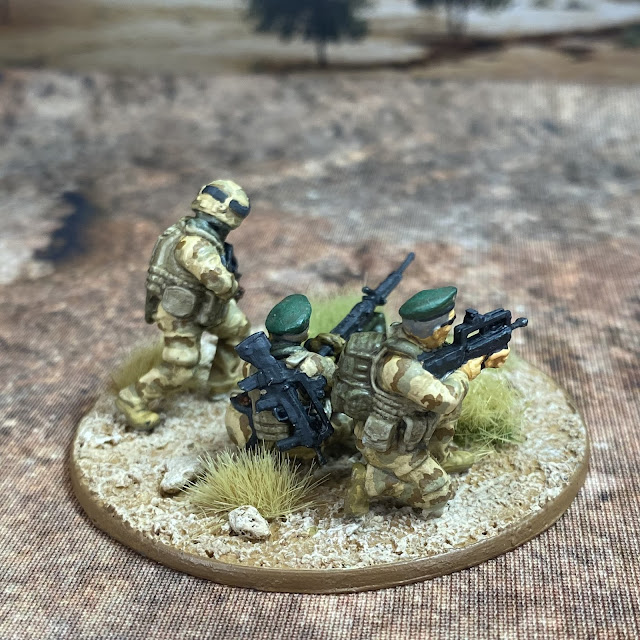 Posted by Major Thomas Foolery at 8:53 AM 3 comments: