Death in the Dark Continent: First Game and Impressions

My gaming group has been regular users of Chris Peers' "In The Heart of Africa" and "Contemptible Little Armies" rules for our Africa games, and we've found them to be quite enjoyable for our casual get togethers. With North Star releasing his new "Death in the Dark Continent" rule set, we wanted to see if it brought anything new to the table.

For our first trial game, Steve and I tried a clash of two European forces: British and French.  We went with the basic "Pitched Battle" scenario to be fought over a jungle outpost. The scenario description says that bases can be placed anywhere up to 6" of the opposing table edge, so we both decided to deploy around the middle of the table. 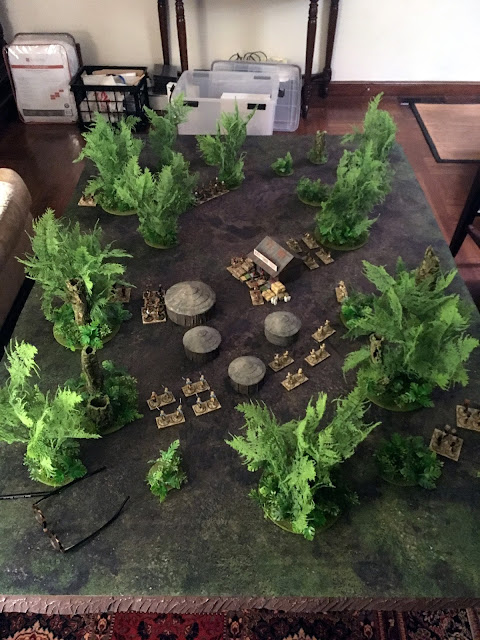 Steve won the dice role for initiative, and placed his French in the village while I did my best to surround them. 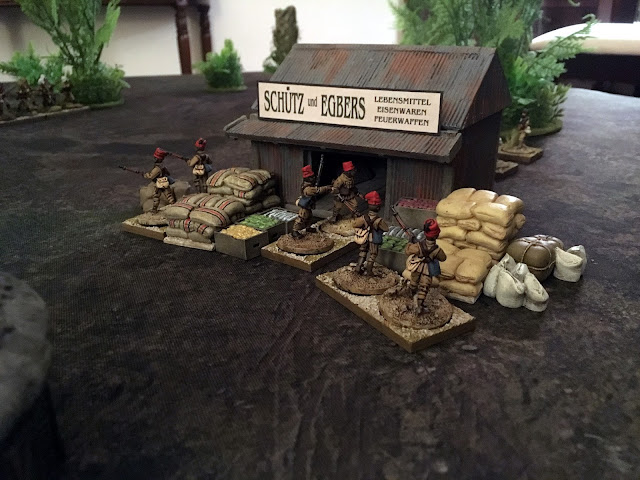 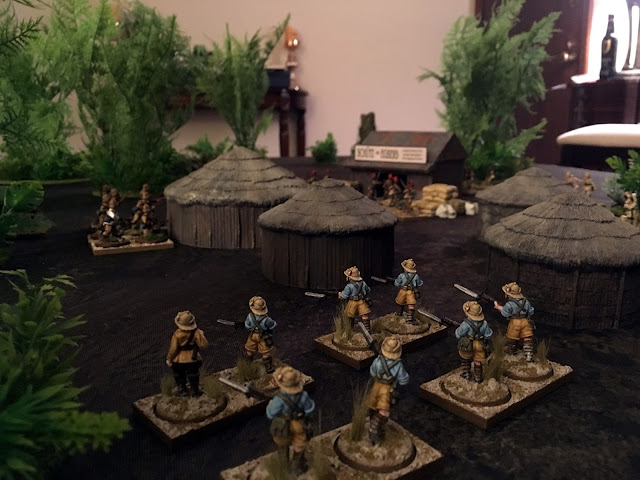 The British askari charged the French tirailleurs holding the trading outpost, but were pushed back and received 2 disorder markers. 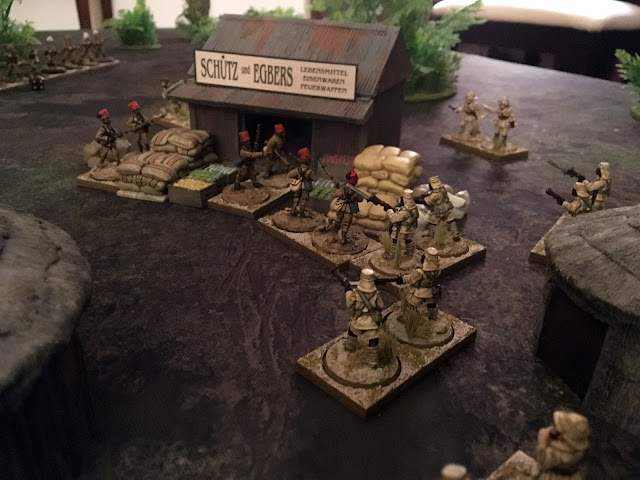 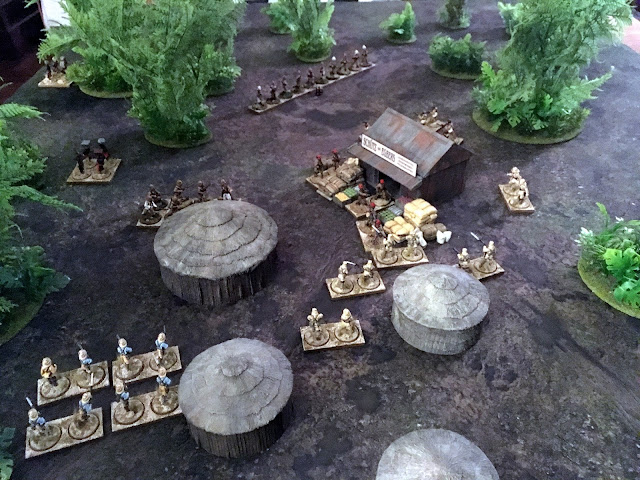 The askari and Sikhs opened fire on the tirailleurs and failed to eliminate any bases, but managed to cause some disorder. The 1st legionnaire squad began firing at the Sikhs, while the 2nd legionnaire squad moved to protect their baggage from the advancing British. 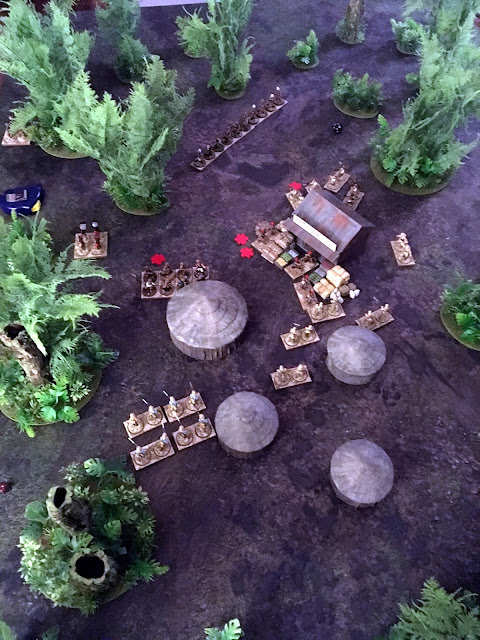 The askari and tirailleurs continued their exchange of gunfire at the trading outpost, with neither side managing to dislodge one another. Meanwhile, the Sikhs changed targets and charged the 1st squad of legionnaires.  Their action was unsuccessful and they were forced to retreat. 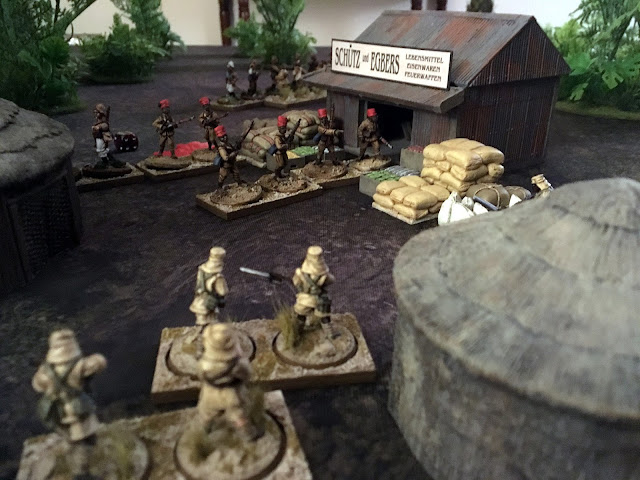 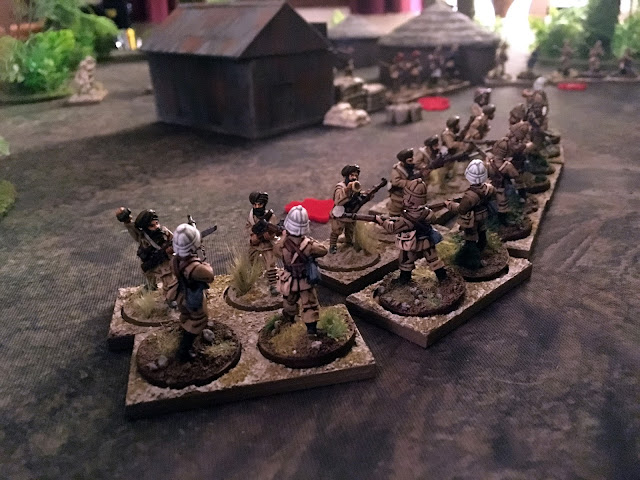 On the other side of the village, the 2nd legionnaire squad and the British unleashed a hail of bullets at each other. 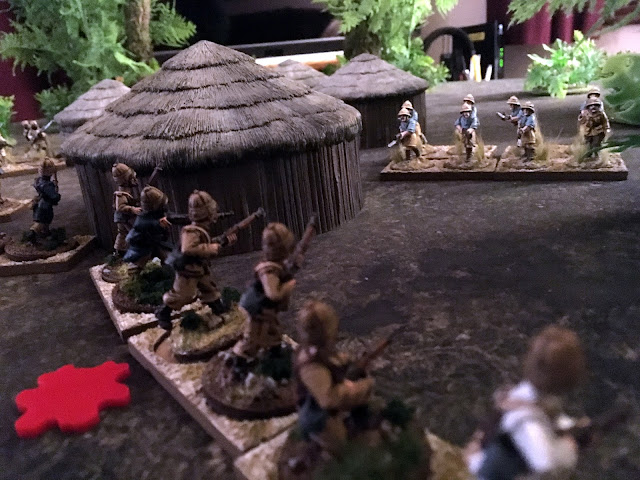 Shooting continued for another round and though no bases were lost, the disorder markers continued to pile up. 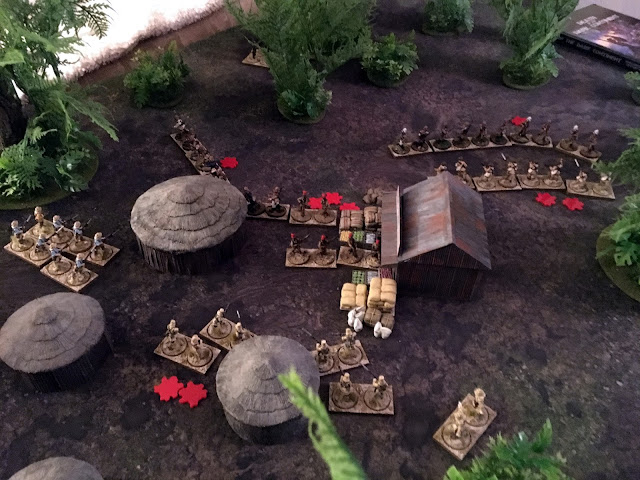 The 1st legionnaire squad finally launched a counter-charge against the Sikhs, but after a short stalemate they were pushed back. 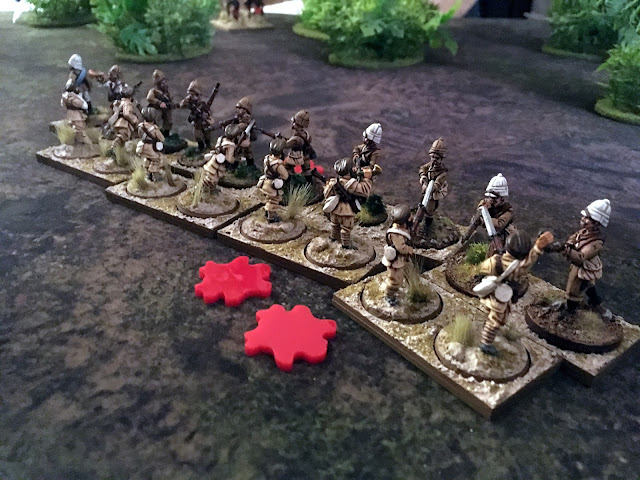 The 2nd legionnaire squad and the British exchanged another round of fire, with the British eventually deciding to take cover behind the huts and move into position to support the asakri advance towards the tirailleurs. 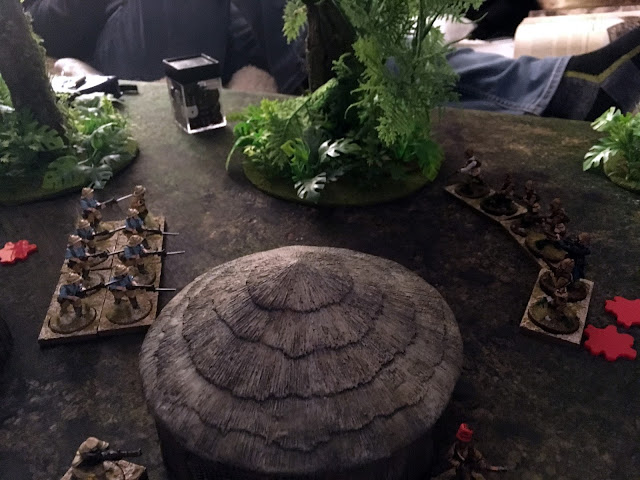 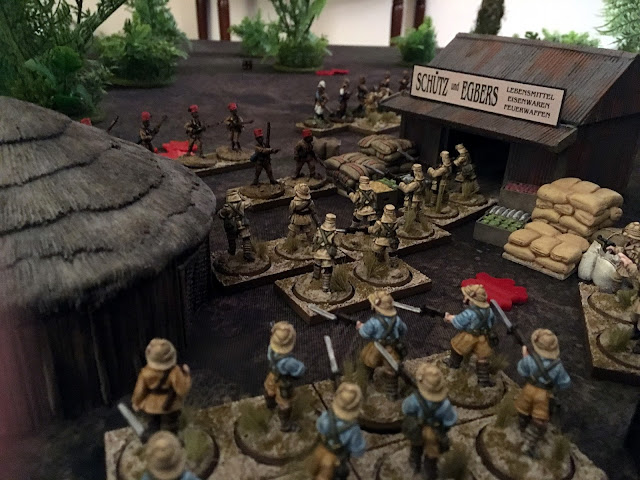 The Sikhs eventually managed to eliminate a base of  legionnaires while the askari overran and slaughtered the tirailleurs. 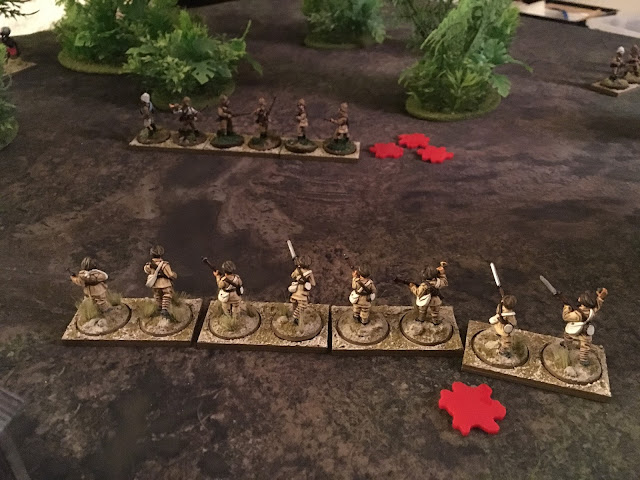 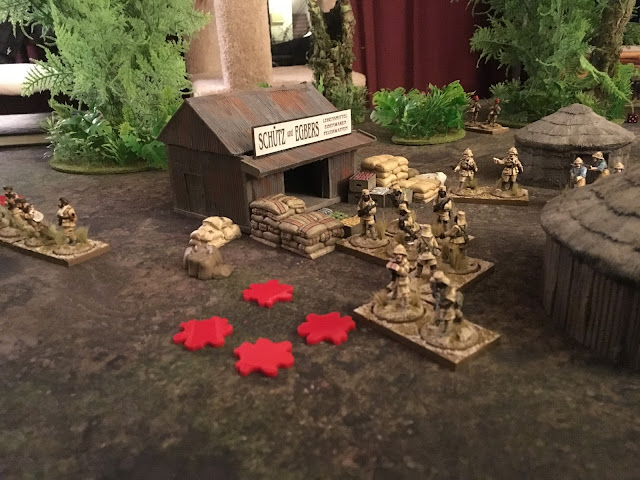 At this stage we decided to call it a British victory and end the game.

So our thoughts on the rules:


Final verdict: While solid, we weren't really sold that the rules are a significant improvement over Chris Peers' other rule sets. It seemed more like a variation on a theme, with some things working better and some less so. If you've already invested in the other rules and army books, I'm not sure this would be worth picking up.  However, if you're just starting out in African gaming, this would be a good purchase, as the rules include all the army lists and histories, plus a bonus big game hunting set of rules.

Posted by Major Thomas Foolery at 11:09 AM 9 comments:

Happy belated New Year!  I've been away from the hobby table for a bit with the holidays and family events, but finally managed to get some figures wrapped up. These are a squad of Japanese Grenadiers created using the Warlord plastic Japanese Infantry box. 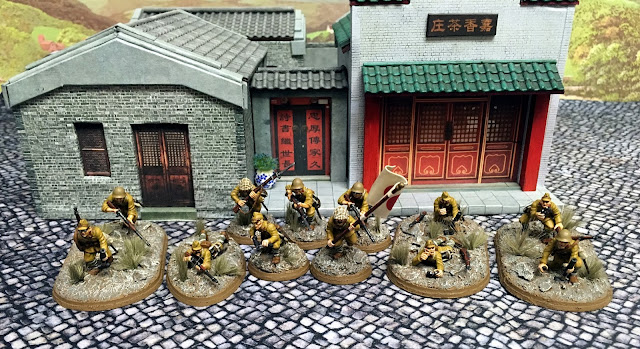 As with my previous squads, I've gone with the yellow green uniforms more common to China than the green used in the pacific. 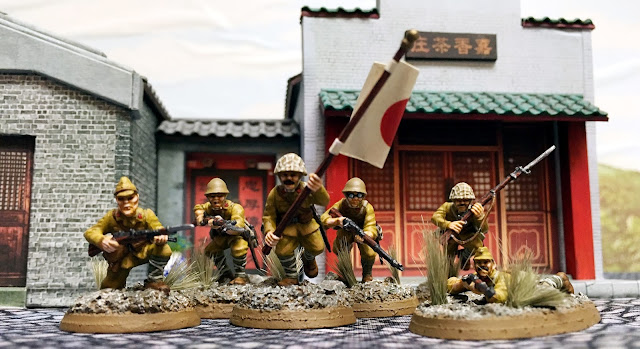 The rules allow for up to 3 mortars per squad, and I've decided to take the maximum.  Rather than individually base each figure, I've decided to include the loaders and base per mortar team. 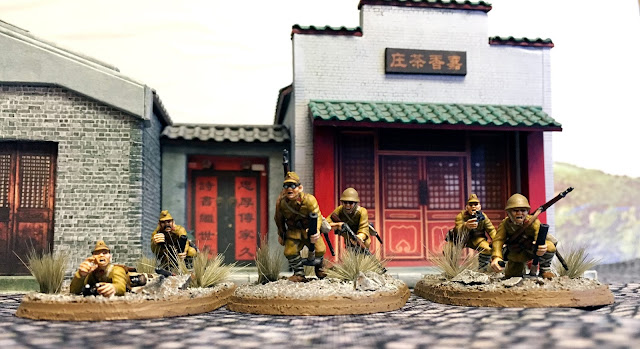 This is my second squad created from the plastics and I have to say I feel like I'm getting a good handle on this kit and am enjoying the construction and painting even more than before. Definitely worth the investment if you plan on fielding an IJA force.