So far I've been using my standard green flocked mat for my African figures, but I've never been happy with it, as I feel it doesn't look right for the African savannah.  As such, I've been on the search for something more appropriate that wouldn't break the bank.  I've seen several people using variations on teddy bear fur, and came across this well done tutorial from Thames Valley Wargamers.  It didn't seem too complicated, so I decided to give it a shot.

Strolling through the local fabric store, I came across both long haired fur (as seen in the tutorial) and short haired synthetic felt .  The long haired fabric ran $12 per yard vs. $5 for the short, so I opted to go the cheaper route.  Plus, it would save me having to shave the fabric and I thought it would look better if I wanted to also use it for 15mm figures.  The cloth was 45 inches across, so almost perfect for a 4x6 table. The store had 4 colors available: chocolate brown, honey, ivory, and grey.  The honey was a bit more yellow than I wanted (my hope was for a tan), but it seemed the best choice out of what was available. I picked up 9 feet of material; 6 for the game mat, and 3 for test painting and use in making terrain pieces for the mat.

I wanted my mat to look appropriate for the start of the dry season, so I decided it would have hints of greens, but would be mostly yellows and tans.  As such, I picked up the following acrylic paint colors: Hauser Light Green, Citron Green, Golden Straw (All from Americana paints), and Sandstone (Apple Barrel paints).  The tutorial recommended diluting the paint with water and applying with a sprayer, but did not say how much to dilute it.  I originally tried approximately 1 part paint to 3 parts water, but it ended out coming out spotty on the test cloth: 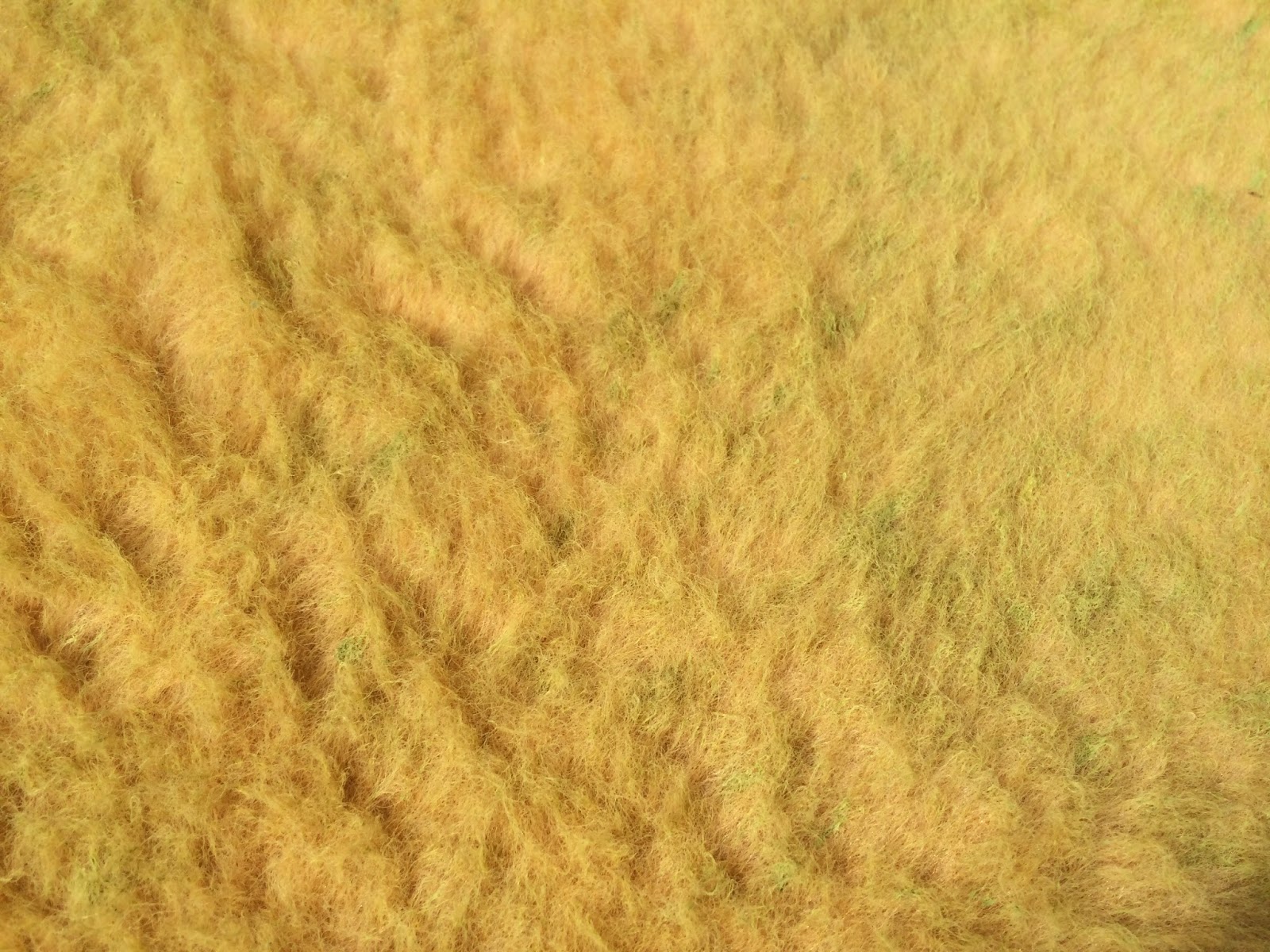 To try to minimize the damage done to the cloth, I decided to spread these spots out using a sponge.  I first went with the nape of the cloth, then against it to try to make clumps and waves of color.

As I continued with the additional colors (I was going from dark to light), I moved on to 1:5 mix ratios, which helped improve to paint spread, but I still rubbed it in against the nape in random directions with a sponge to minimize color clumping.  At the end of the afternoon, I ended up with this: 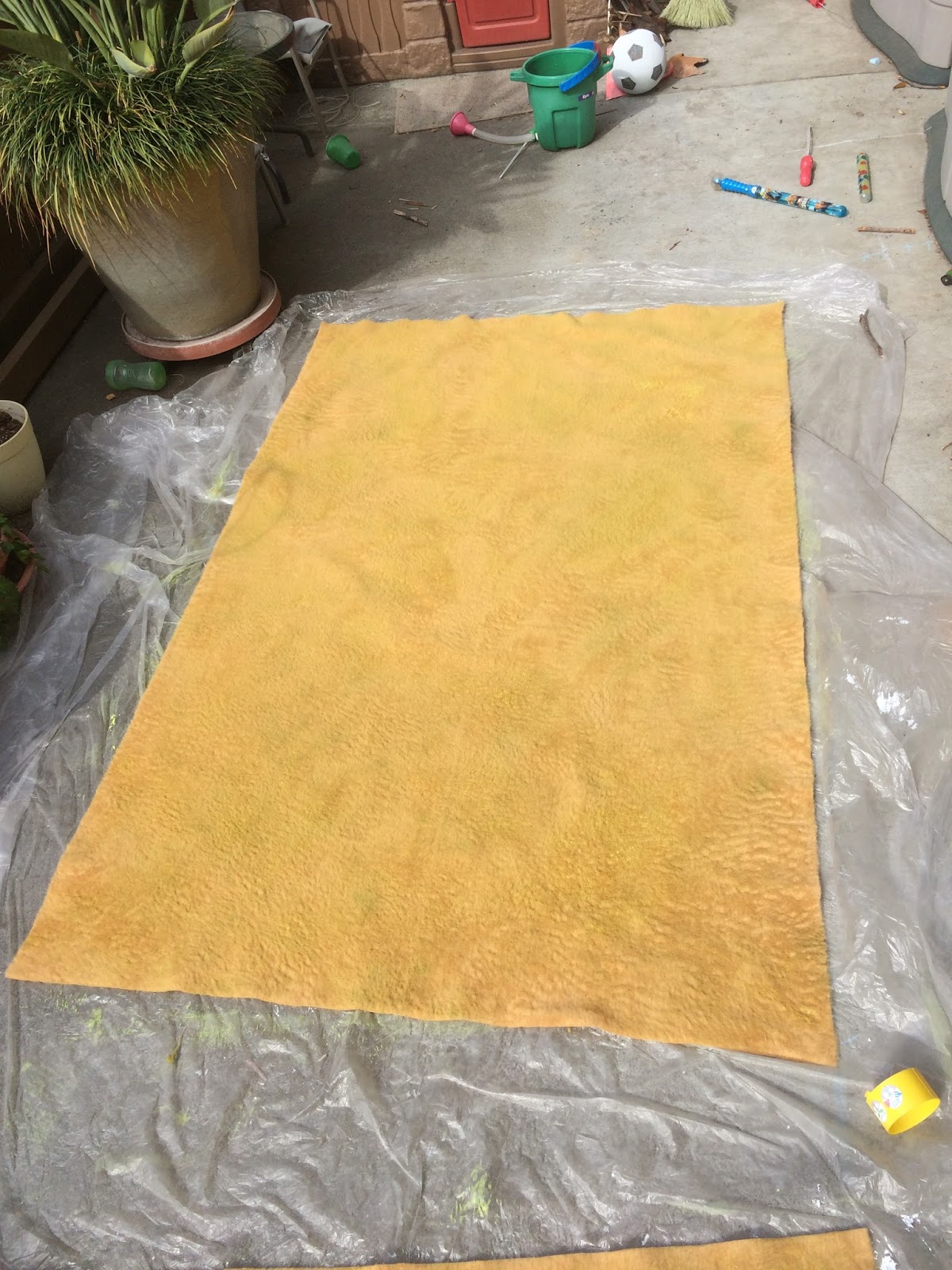 The color changes were subtle, but I thought it looked pretty good on the patio.  However, that changed once I brought it indoors and looked at it under artificial light.  The color differences were not really apparent and overall it just looked too yellow.  A second round of spraying was going to be required and I'd have to better saturate with paint.

For round two, I decided to start with the sandstone and then go from dark to light with the greens/yellow.  I also decided to dilute the paint more (1:10) in hopes of having it work further into the hairs.  At this dilution, the spray was a much finer mist that spread better.  I put on a bit more than last time, and let some areas sit as is, while using the sponge on others (again against the nape).  This resulted in something a bit better: 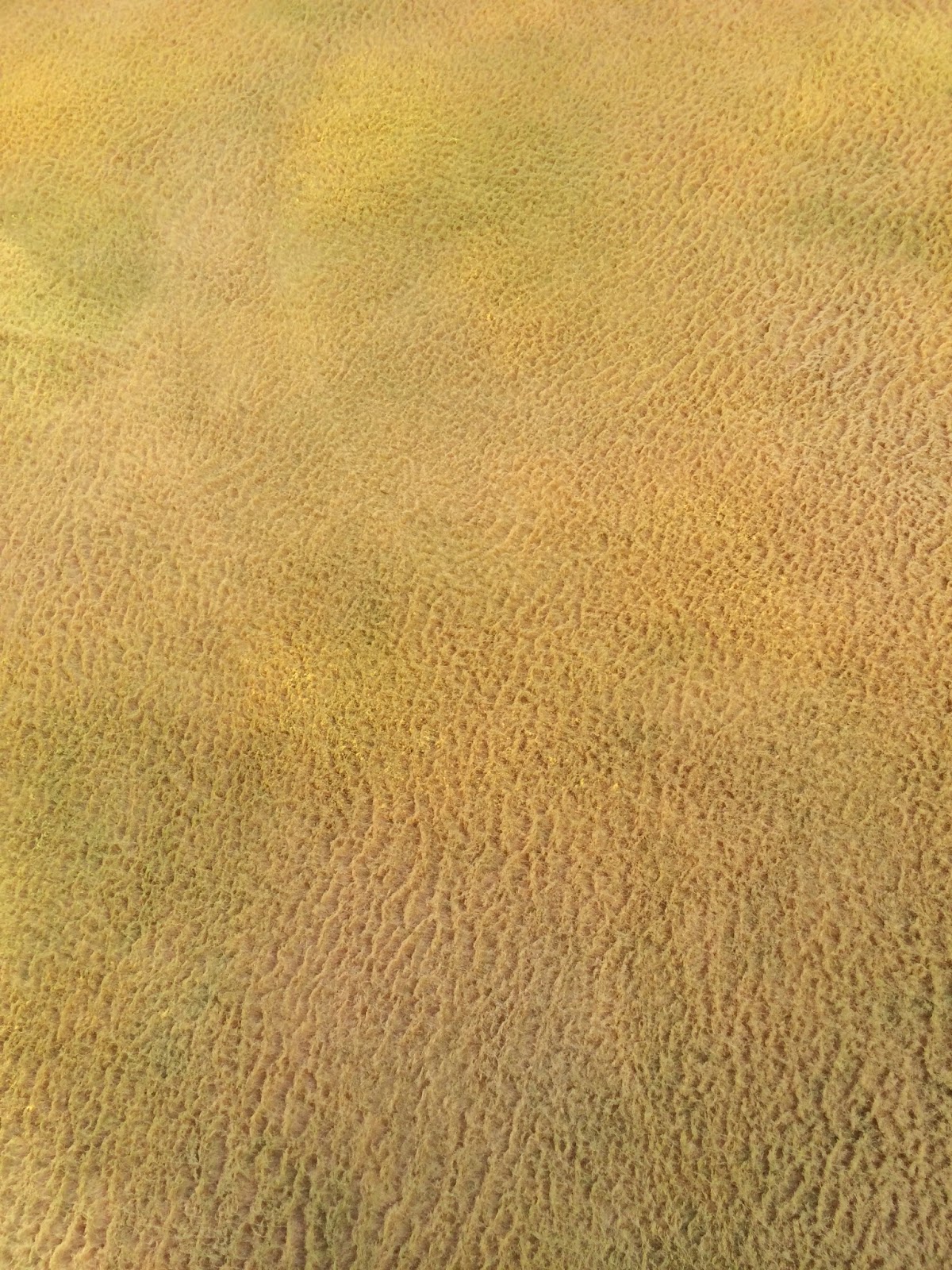 With the additional paint covering the fabric, the hairs also started to clump in nice waves, giving a nice random pattern to the texture which I liked. At the end of round two, I ended up with a mat that had much more pronounced color difference (at least in the sunlight): 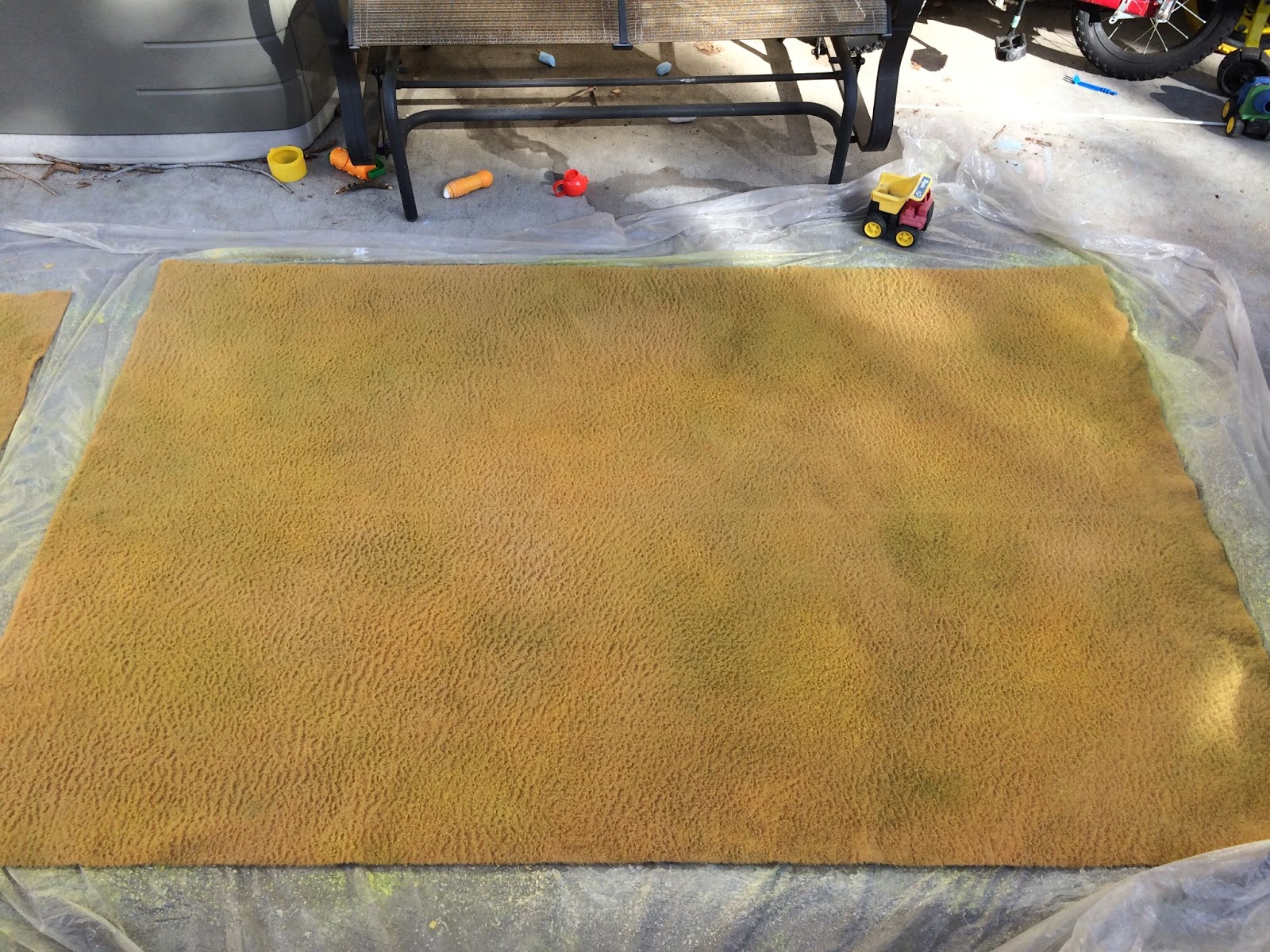 So how did it look once I got it inside?  Under bright florescence lighting it held up pretty good, but under more yellow "warm" lighting, it wasn't a s bold as outside.  However, I think it will still work ok. 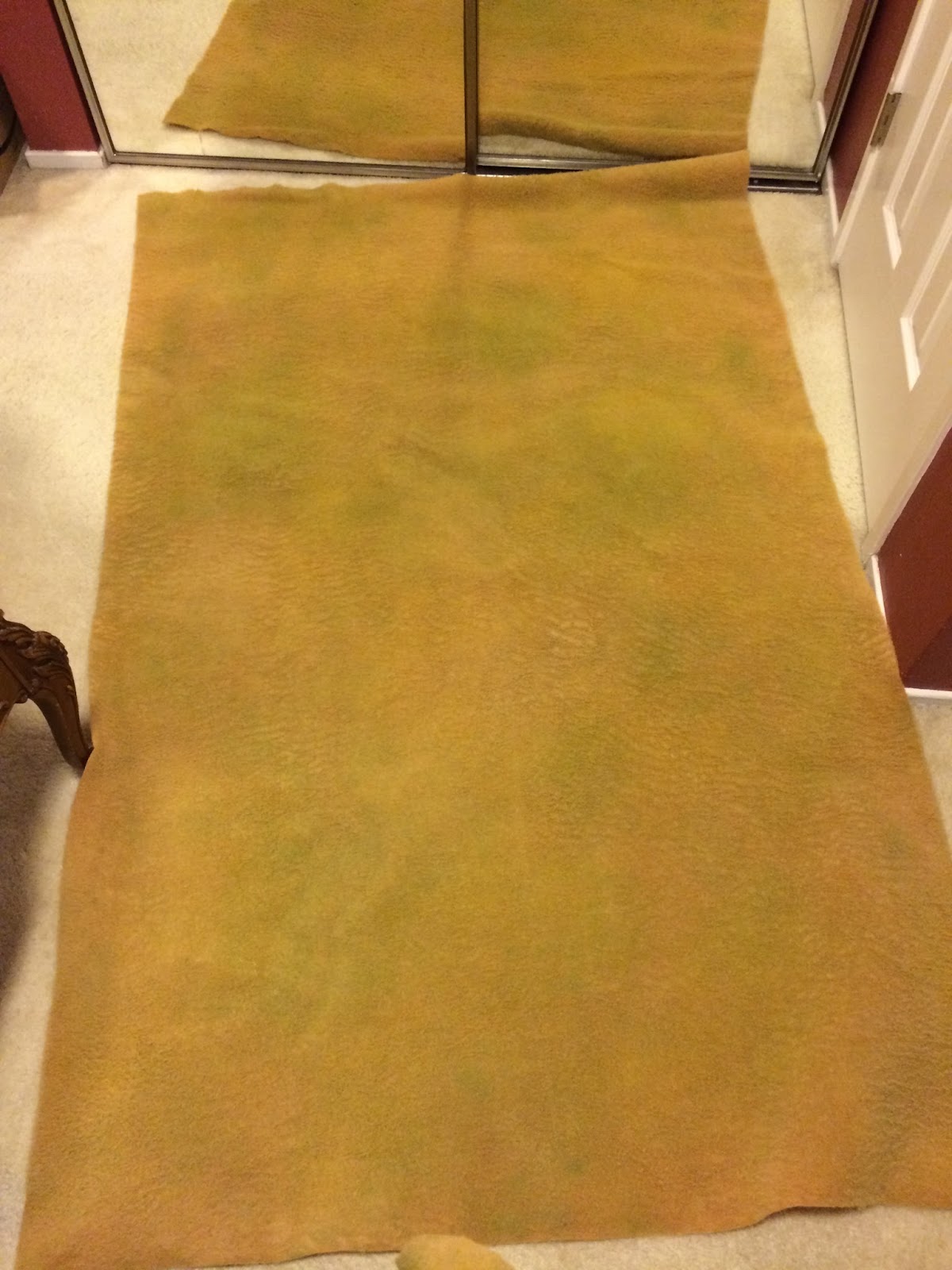 The only thing I was a bit disappointed about is that the bulk of the color work seems to fade away when you get up close, so it doesn't work as well as I hoped for photographing miniatures up close. 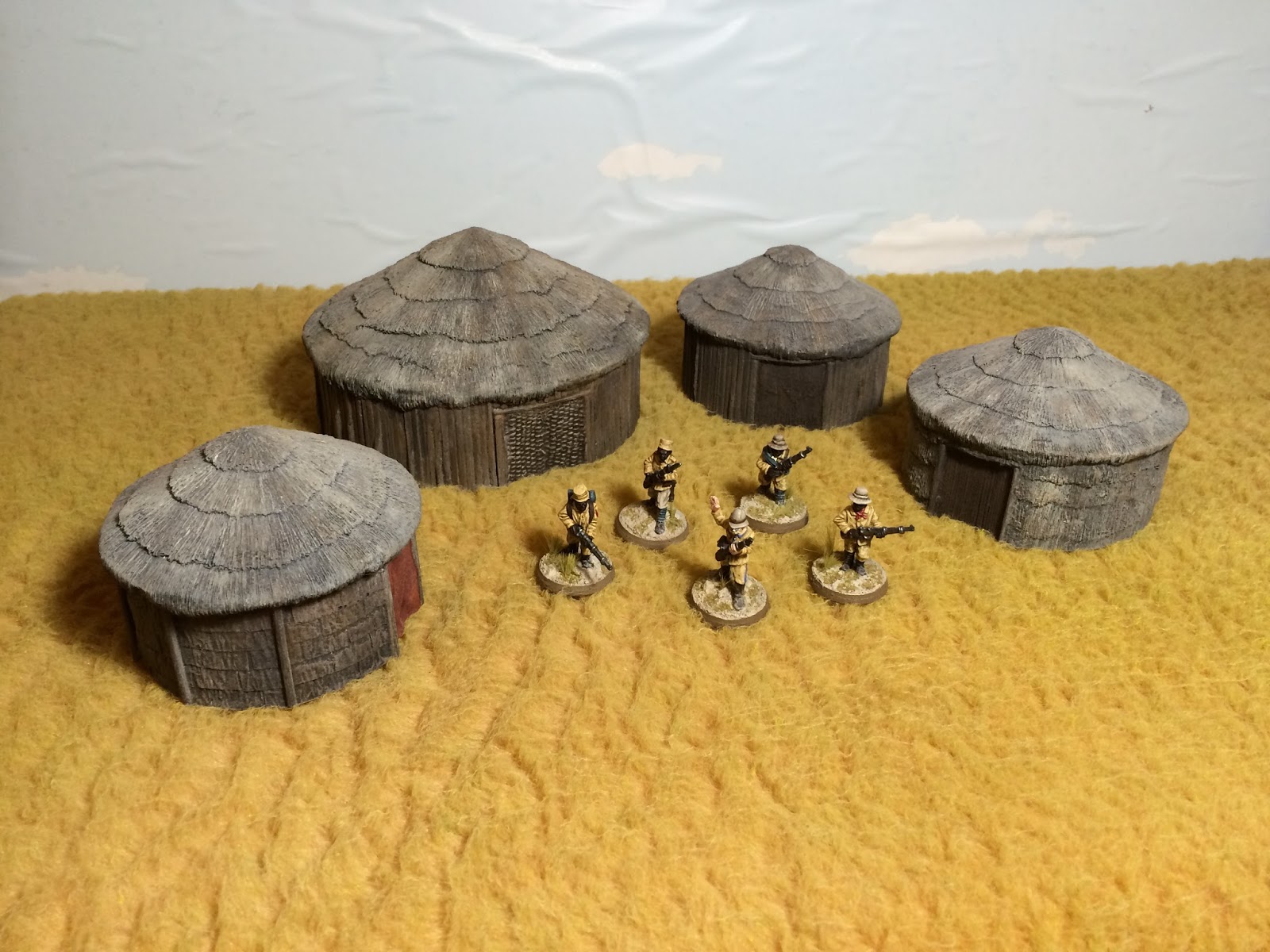 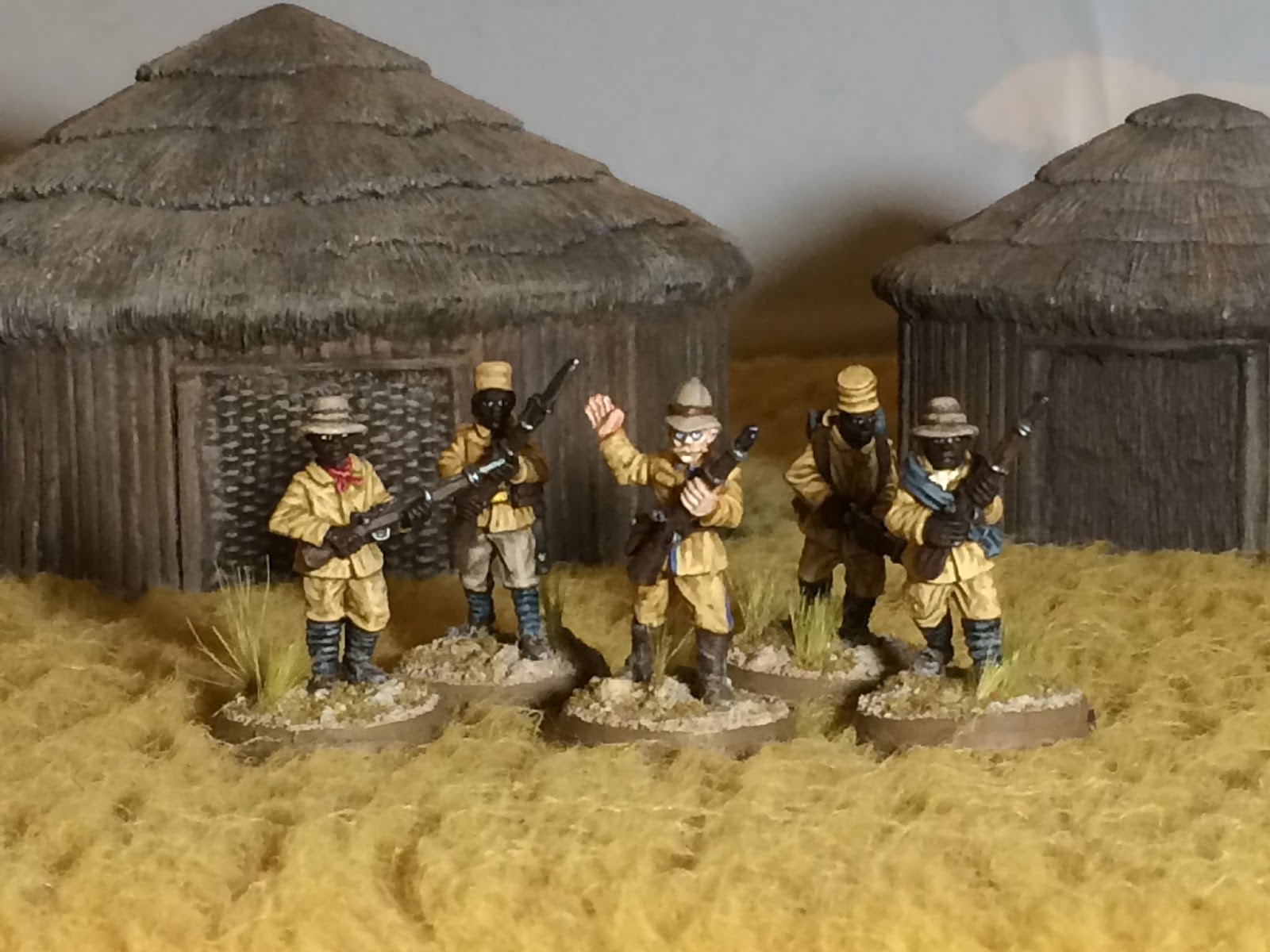 Still, at the end of the day I am happy with what $20 of supplies and two afternoons of work got me.
Posted by Major Thomas Foolery at 6:33 PM 2 comments:

Well I'm back with another unit for my Deutsch-Ostafrika WWI project (as well as VBCW).  These are members of the King's African Rifles (KAR). 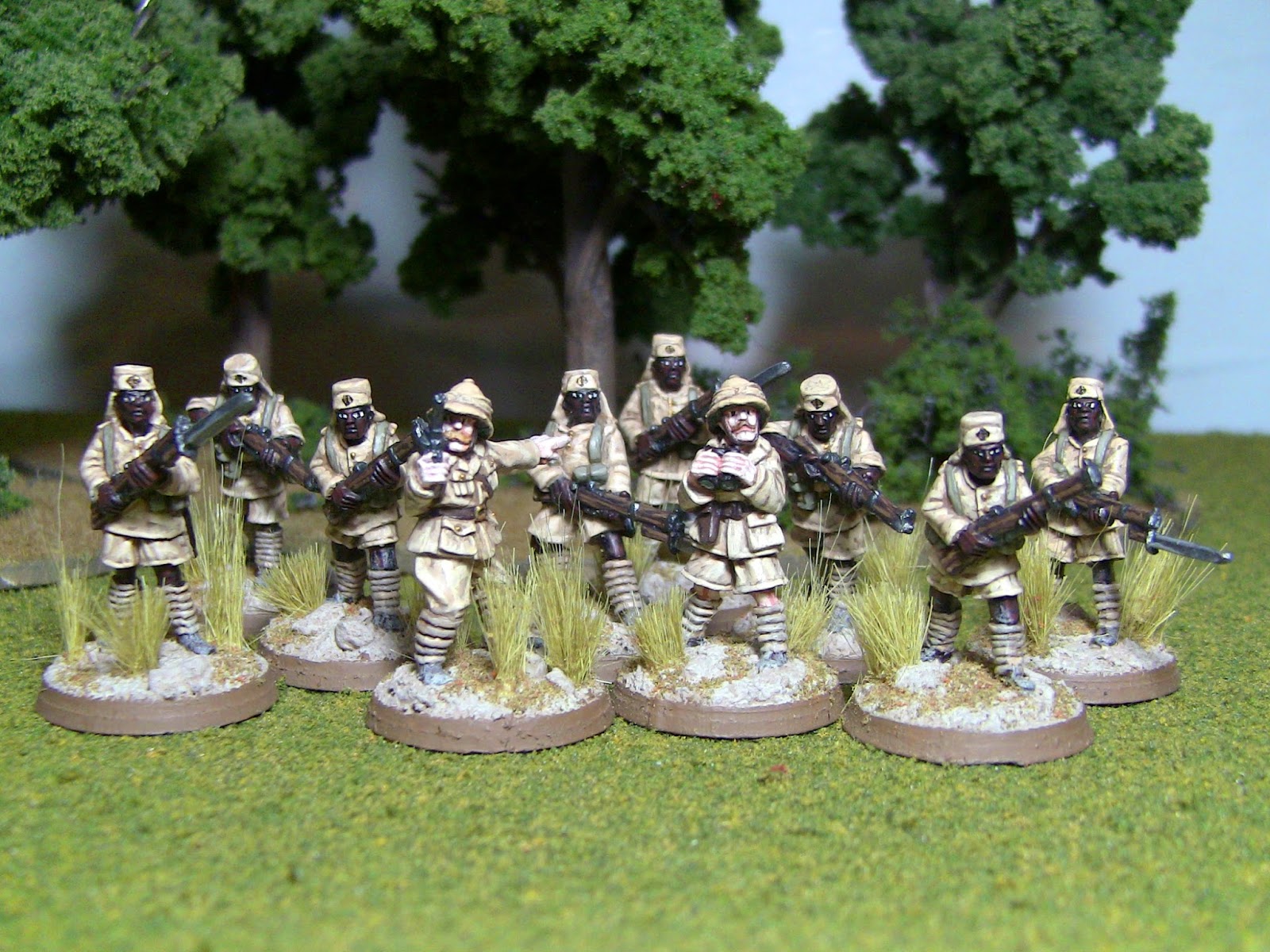 I have painted this unit to represent the 2nd Battalion from Nyasaland as pictured in Plate F in Peter Abbott's, "Armies in East Africa 1914-18".  The uniforms are described as khaki, but the illustration shows something a bit lighter in color, which I copied here.   Also of interest is the illustration shows a diamond shaped cap badge,  while the text on page 45 states they should have a rectangular badge and 1st Battalion should have the diamond. I've again stuck with what is shown in the illustration.

Figures were obtained from Brigade Games.  They are both well sculpted and cast.
Posted by Major Thomas Foolery at 7:26 PM No comments:

So I'm back with some more figures for my African WWI gaming.  These are porters from Old Glory's Darkest Africa line.  I've discussed my unhappiness with them before in passing, but haven't given you a chance to see them up close. 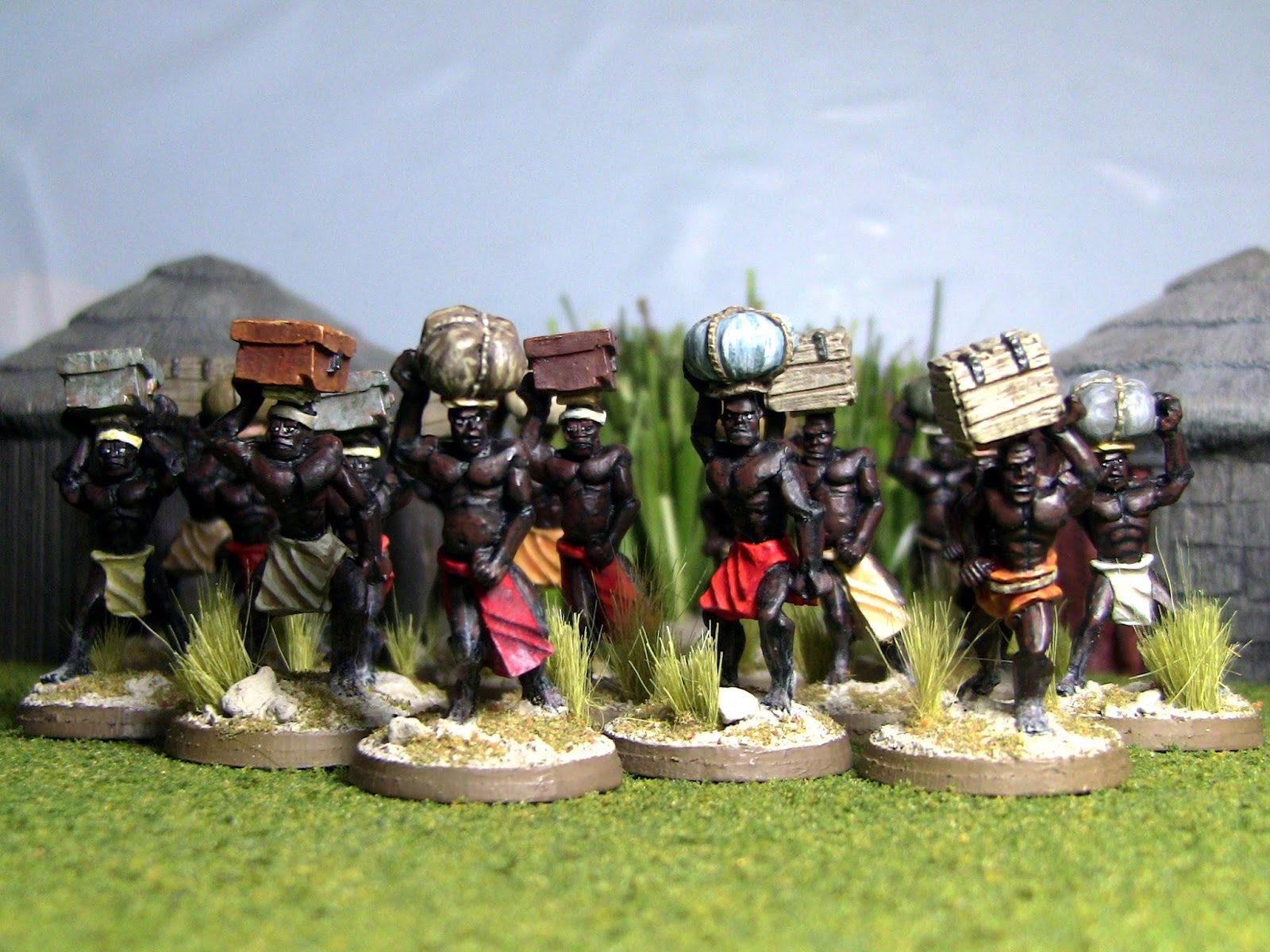 You get four body types, and five head types, though I have only used four (the fifth was carrying elephant tusks, which don't really fit the part of a military baggage train). The heads do not fit well on the bodies, and you will need to add green stuff to the necks to keep them from looking ridiculously thin. The muscles also look lumpy, with quite a few of the arms at odd angles, with protruding elbows that make the figures look like they were sculpted wearing gauntlets. 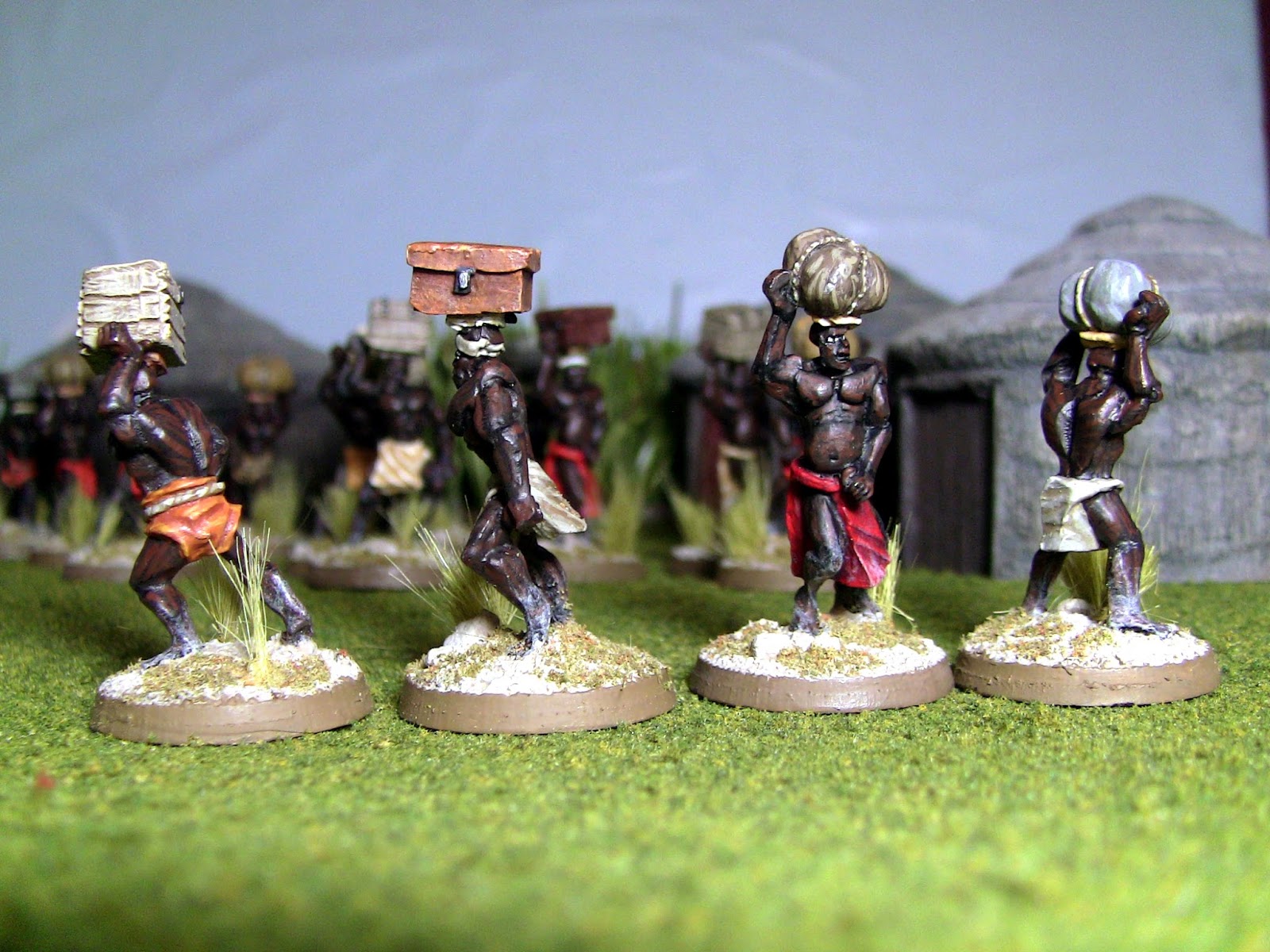 Here are some other angles to show you the strange arms and over-sized back muscles.

The casting quality was also really bad, with strange lumps or holes in the figures.  For example, in the first photo, look at how all the cases have chunks missing from the lower corner.  There were also a lot of misaligned molds when the heads/baggage were cast, resulting in the need to do a lot of filing and filling.  You can see some of this misalignment in the second photo, on the crate carried by the porter on the left (this is even after all my work to minimize it).

The also set comes with a guide and two porters carrying a lion corpse, but I have not yet painted those.

Overall, I am not really happy with them and would not have made my purchase if I knew what I was getting.  However, with quite a bit of work I think they will look acceptable on the table, and I did get a lot of figures to create an impressively sized baggage train. 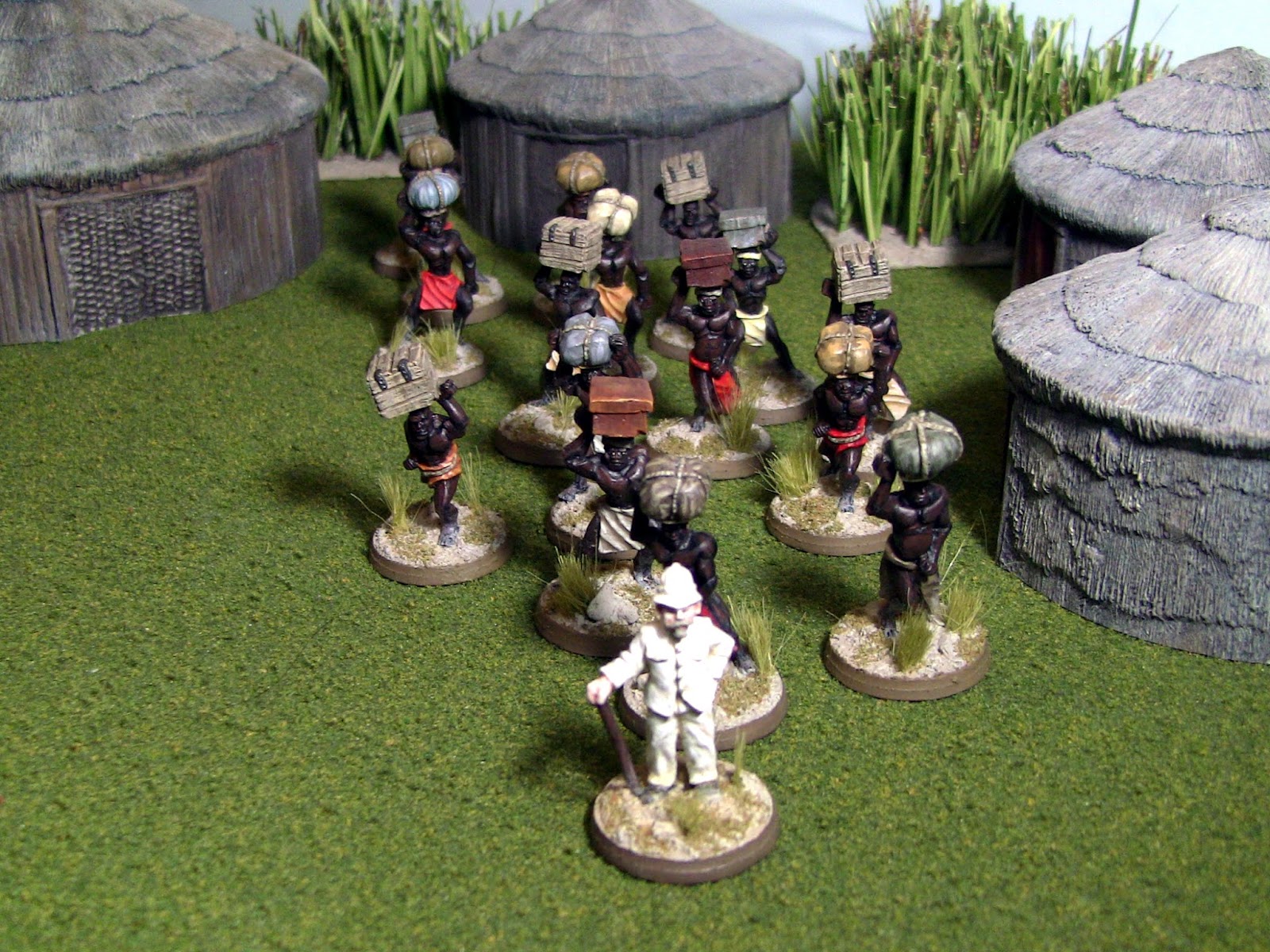 Email ThisBlogThis!Share to TwitterShare to FacebookShare to Pinterest
Labels: Deutsch-Ostafrika, World War One

As I've mentioned before, I like to have appropriate music for my painting and gaming adventures.  Now that my African figures are back on the worktable, I thought it was time to put together some music to inspire me.

This station is a mix of orchestral adventure music and traditional African songs from across the continent.
Posted by Major Thomas Foolery at 12:21 PM 1 comment:

Pennisetium purpureum, often called elephant grass, is common through many parts of Africa, including the lands of the old DOA colony.

Many people use plastic aquarium grass to represent this, and I've seen it done rather well. However, I wanted to create some grass sections that I felt looked a bit closer to the real thing.

Combing through the dried and plastic plants section of the local Michael's craft store, I found this clump of decorative grass for around $5. 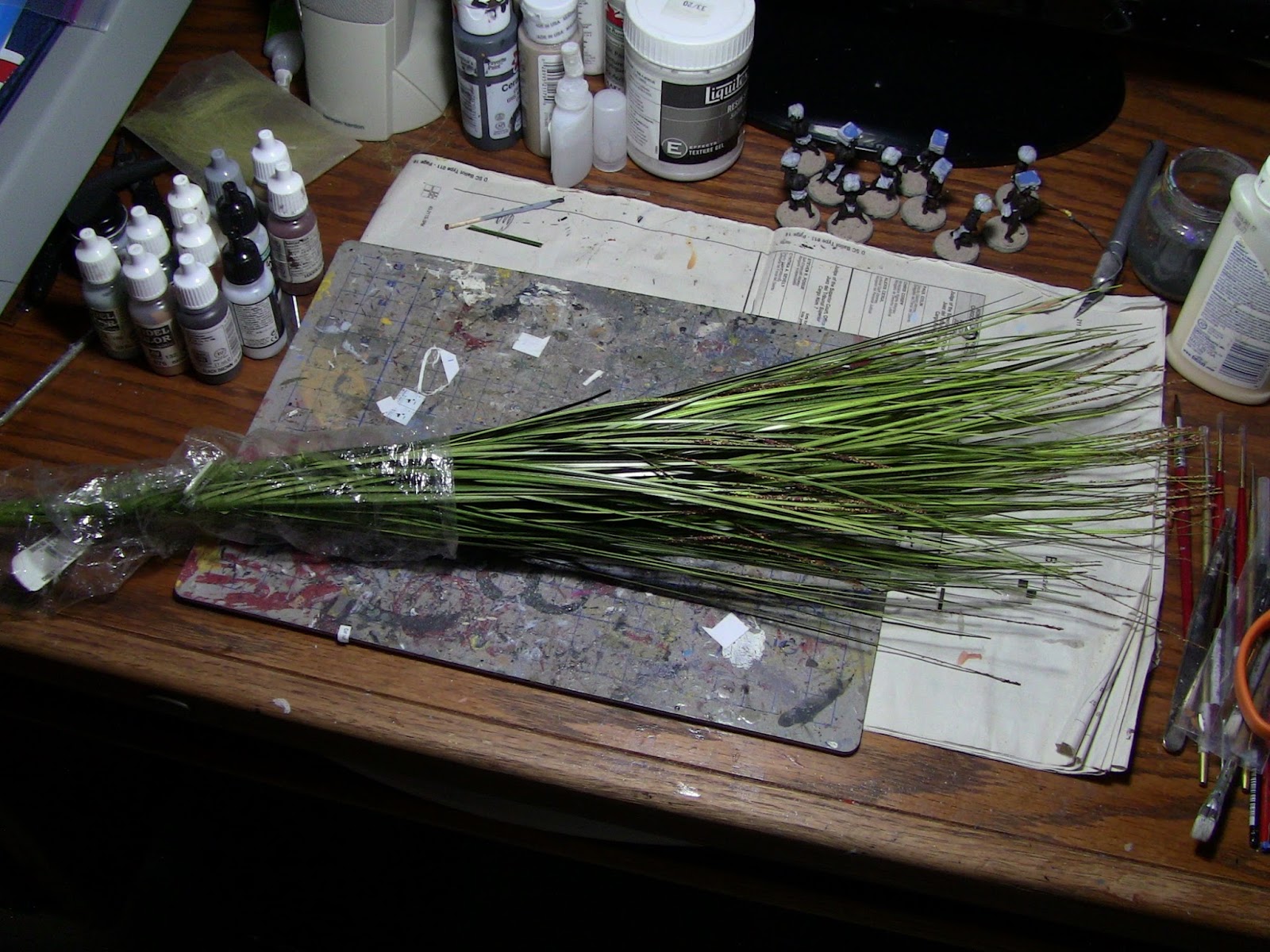 It is a dried grass that has been treated with a green dye. This gives it a nice bit of spotting and color variation, making it look more natural to the eye.  Additionally, some of the grass tips have been dipped into a mix of small brown flakes, giving the appearance of seeds.  On the table, I think this will do well to mimic the look of the seed pods seen on the grass.

To base my grass, I took some thin fiberboard scraps I had lying around, and cut them into random shapes with a jigsaw.  The edges were filed down and I proceeded to drill holes into the base of various sizes to accommodate the clumps. 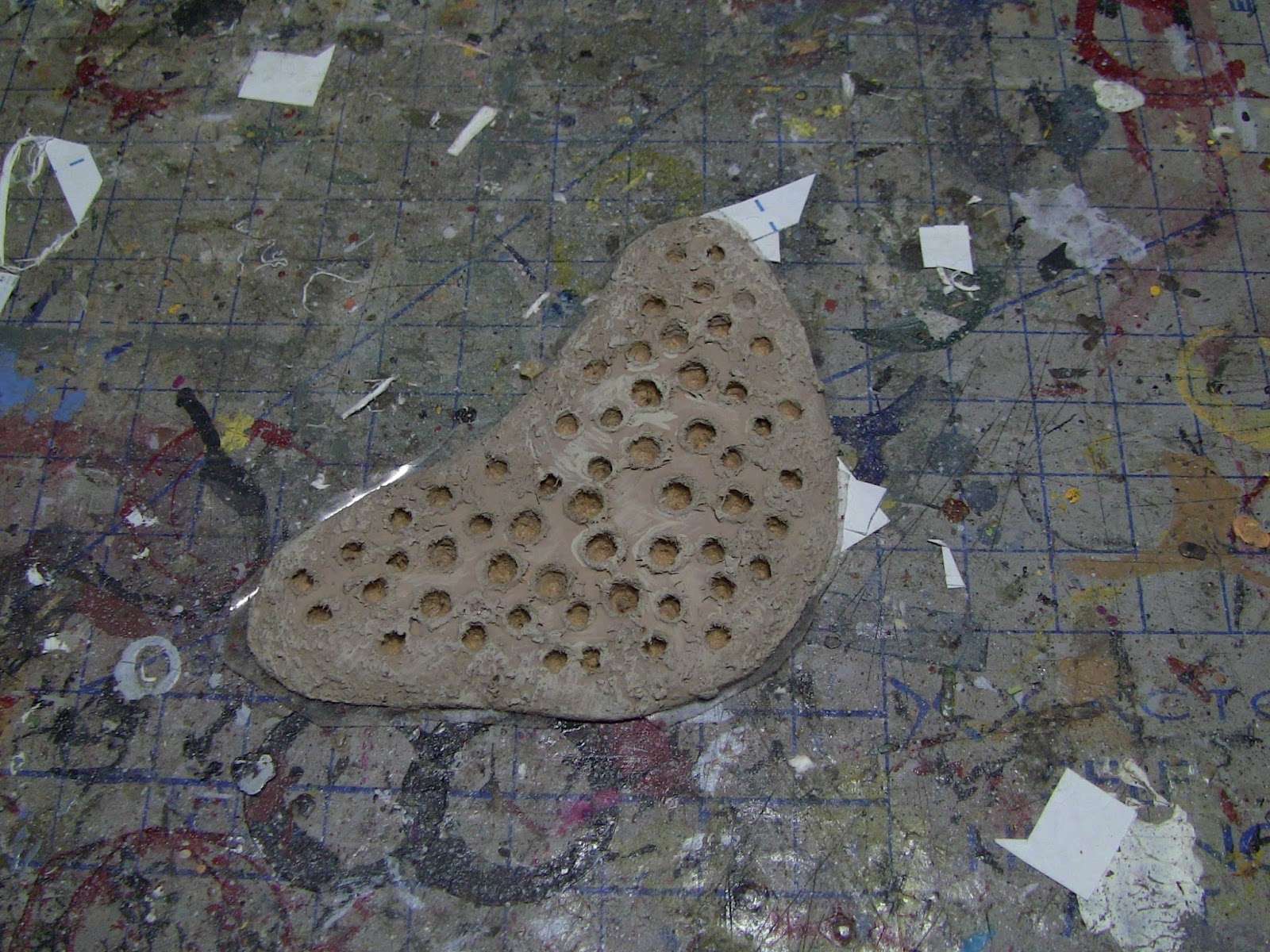 A bit of textured gel was added around the edges, then I painted the base in two brown tones. Lastly, I put a temporary layer of packing tape across the bottom to help prevent glue from dripping out of the holes.

Here is the intial test clump: 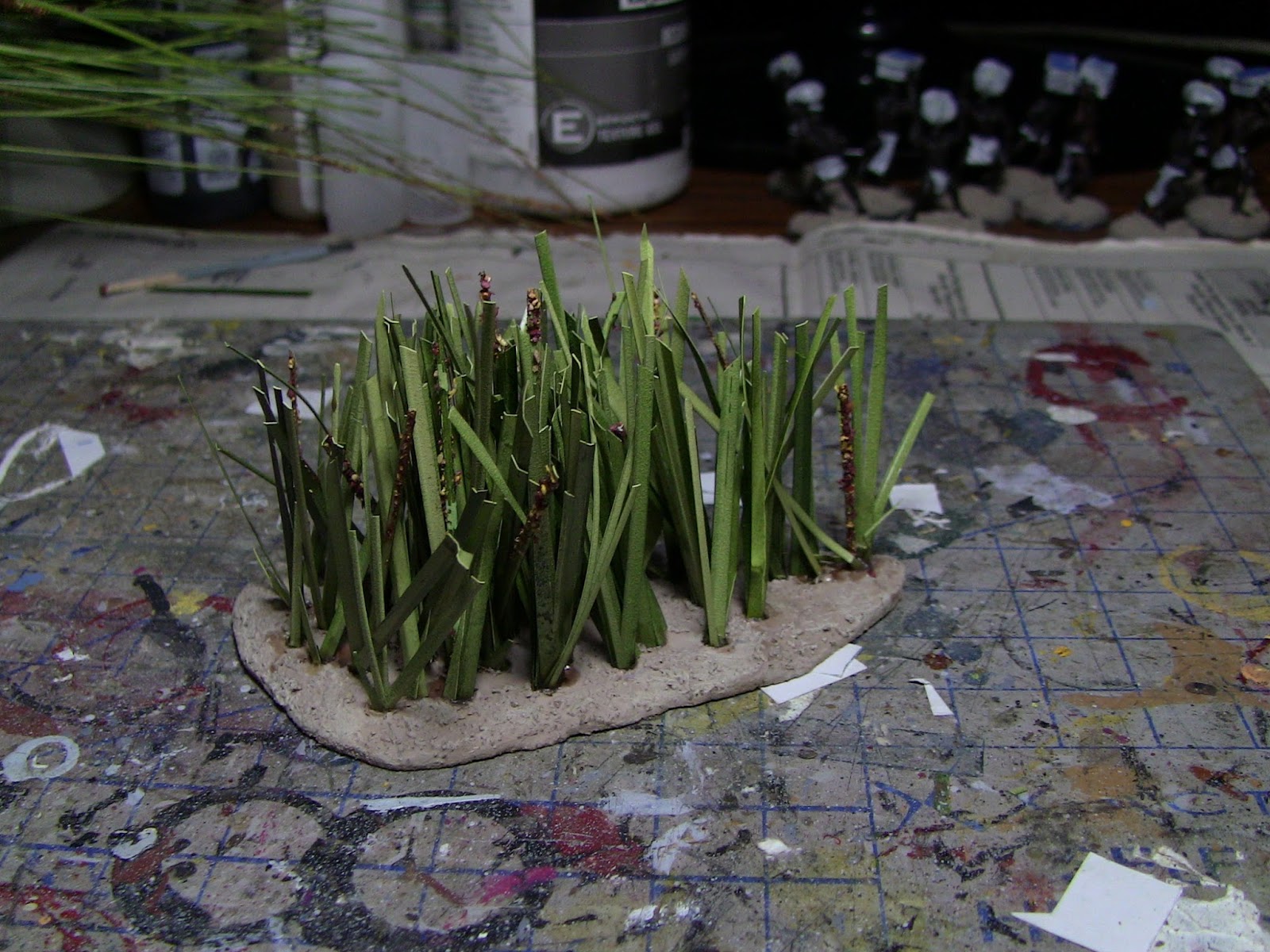 Sections of grass were cut to various lengths, arranged in bundles, and inserted into carpenter-glue filled holes on the base.  I started in the center of the base and filled outward.  The reason for this is the grass has a tenancy to fall over, and I wanted to build a strong core first.  After the core dries, you can let the outer clumps rest against it as their glue dries.

I learned a few things from this first attempt to help with my next build.  First, if you pack the grass in too loose, the problem of falling over is magnified and it is easier to knock the grass out of it holes even after the glue has dried, giving me spots that look too bare.  Second, as you get to the base of the grass, it obviously gets thicker. To my eye, this thicker grass looks out of proportion for 28mm figures, and a blunt tip magnified this.

So for the second stand of grass, I decided to really pack the holes, then bend grass as needed after the glue dried.  When I got to the thicker grass pieces, I often cut the tips on angles and also split the grass into multiple strands so they would look thinner and more random.  Overall, I think I ended up with a much improved product; it looks more natural and is also sturdier. 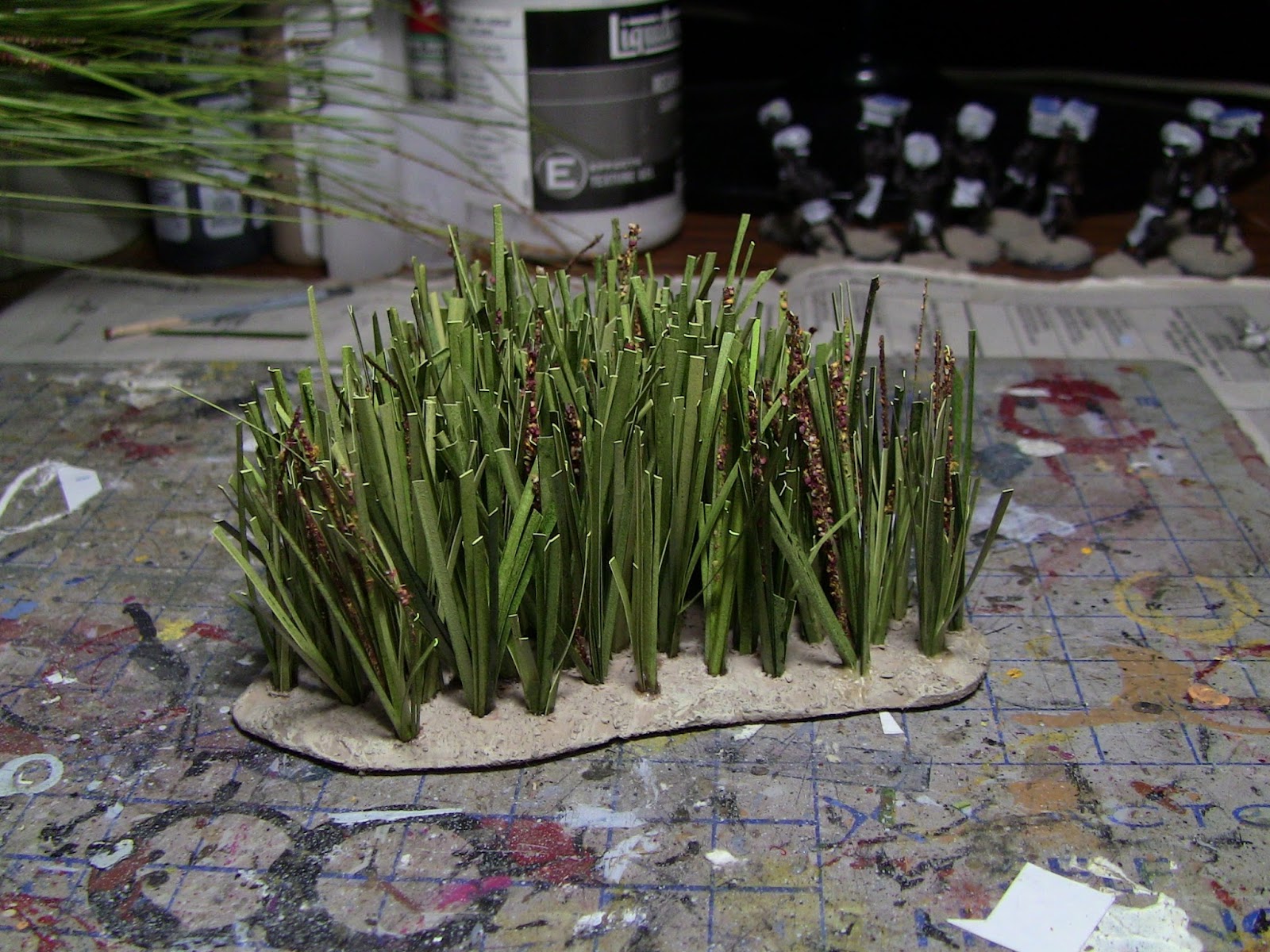 As the photo of the real grass shows, it can get twice as tall as a man.  From my perspective, something this tall would be a pain to store and would also give me fewer stands out of my grass.  Therefore, I've decided to make my clumps just slightly taller than my figures.
Overall, I am very happy with the final product, but will have to see how well they hold up over time. I should also mention that putting these together is not fast.  In addition to the cutting time, you can only glue so many grass clumps per working session, as you risk knocking over your previous work if their glue isn't dry. Filling in the grass using a spiral pattern tends to help speed things up to some degree, but don't expect to complete your stand in a single day.