The hillside for my village came off the work table this morning: 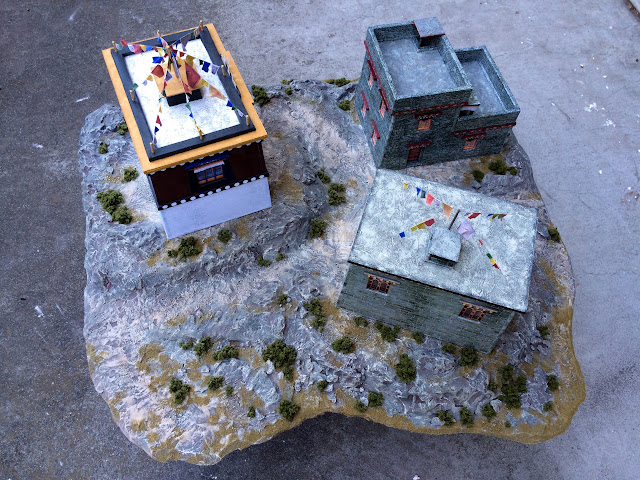 I had originally planned to have something that could hold 4 or 5 buildings, but even a hill for 3 buildings ended up taking up a 2 foot x 2 foot space. As such, I went a bit less grand.

Construction started with high density foam sheeting on a my usual MDF board base. 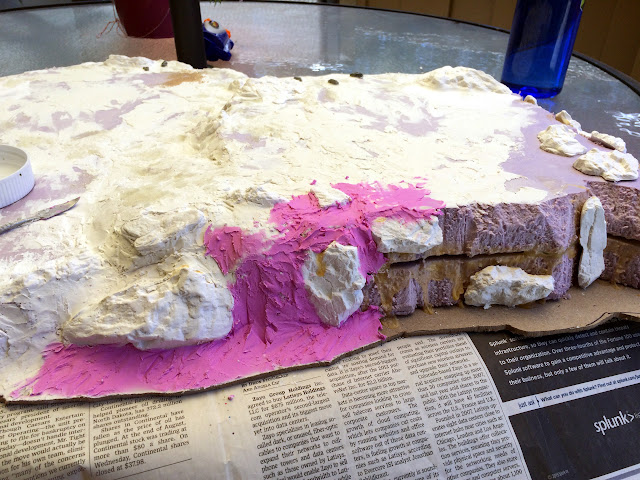 Instead of cork bark on the sides, I decided to use Hydrocal Plaster rocks made with Woodland Scenics rock molds.  They are actually fairly easy to make if you follow their instructional video. I'm not sure how durable they will be, but nothing ventured, nothing gained.  They also look better than anything I could hand sculpt. The space between the rocks was filled in with DAP spackling compound.  After this dried, bis of natural rock and resin texture gel were added. 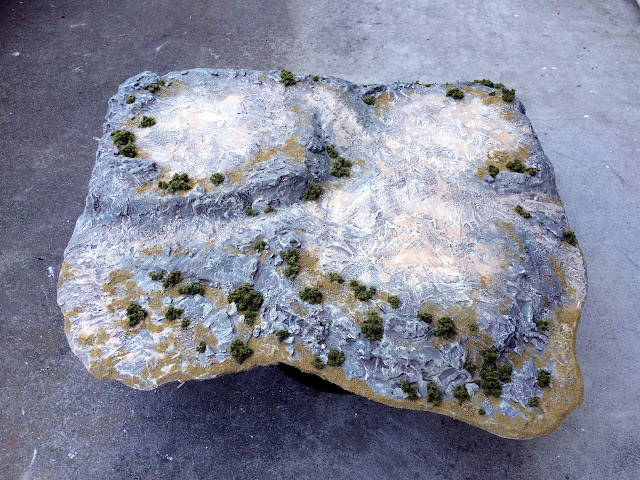 This hill was going to be mostly exposed rock (vs my African hills), so I spent a bit of time trying to get a nice color blend. I started with a medium brown, washed with diluted charcoal grey and green grey, then dry brushed pewter grey, light brown, and sandstone.  Bits of flock and Woodland Scenics bush material were added to break up the rock a bit. 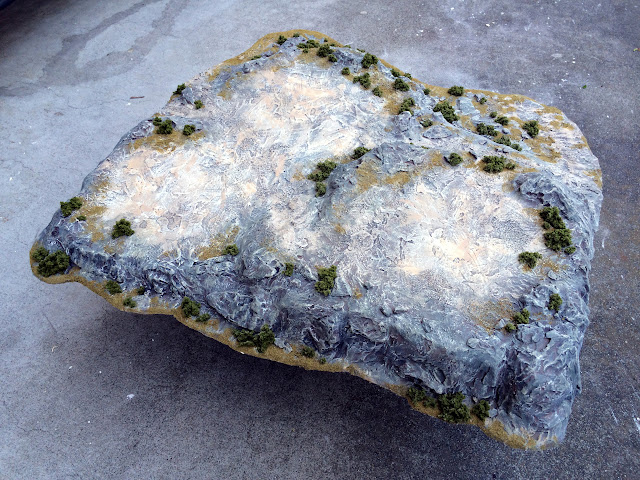 I wanted to be able to use this hill for other projects, so the buildings have not been glued down, and their resting spots on the hill have been textured instead of left flat.  Unfortunately that means that the buildings don't sit completely flush on the base, but I feel the additional versatility is worth that shortcoming; and unless you are down at eye level, I don't think it's too noticeable. 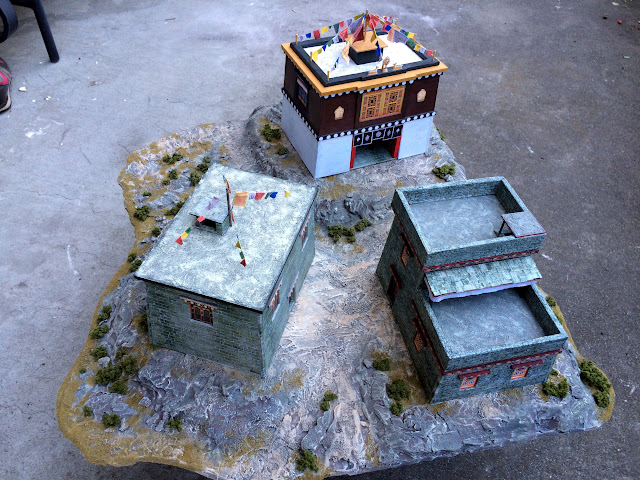 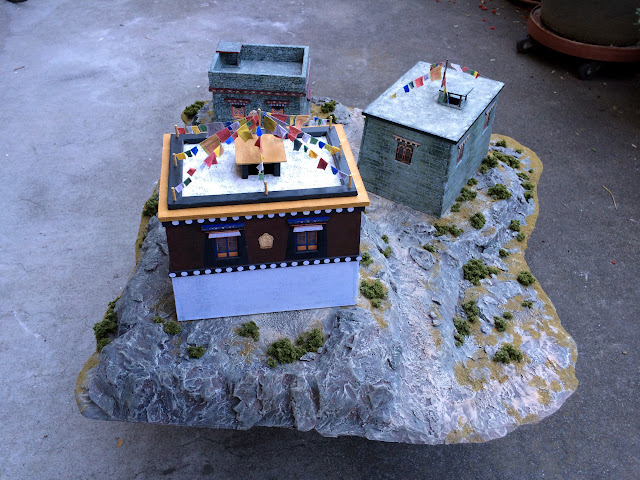 There are two path up the hill, the main one coming between the two houses, and a narrow one winding up the hillside next to the temple. 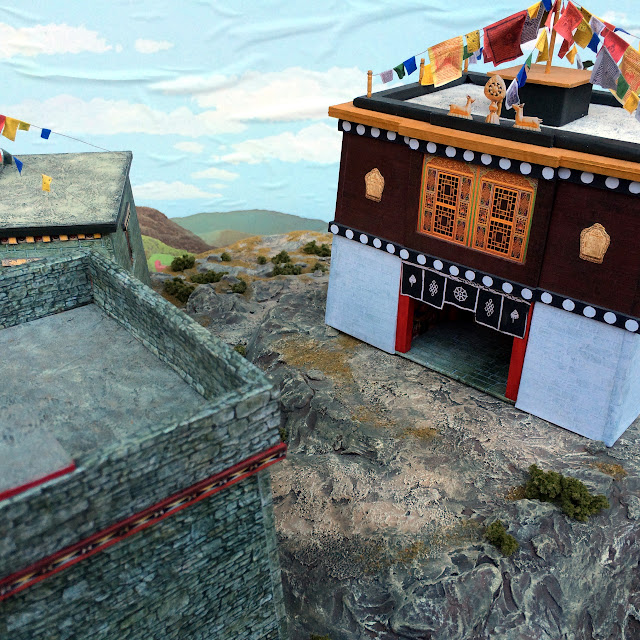 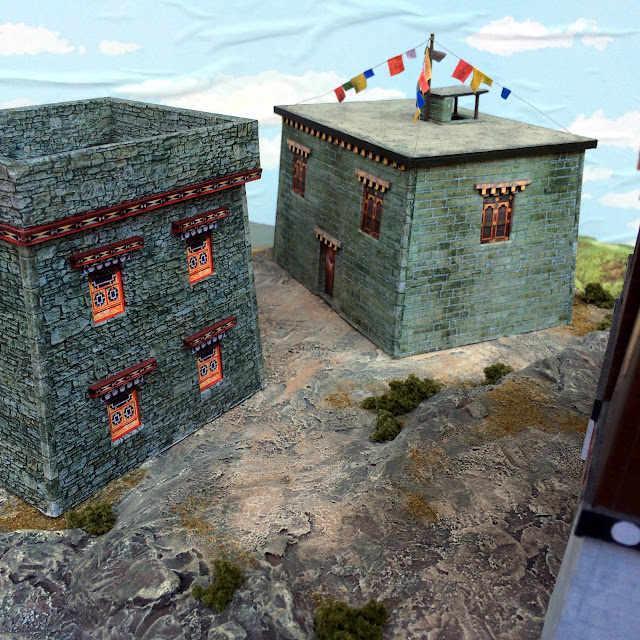 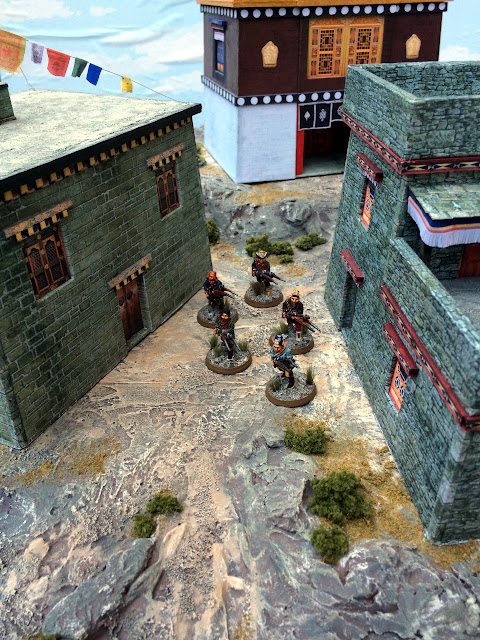 Mostly likely I'll make one or two more buildings to sit below to help create that nice layered look you often see in these villages.  But for now, I think this is enough to get us started.
Posted by Major Thomas Foolery at 12:36 PM 7 comments:

Email ThisBlogThis!Share to TwitterShare to FacebookShare to Pinterest
Labels: Back of Beyond, Terrain

It's been a while since I last worked on my village for Tibet/western China, so I thought I'd take a break from painting figures and get another building ready. This is a small Buddhist temple that will be the center piece of my village. Though a grander building would have been more appropriate, I wanted to keep the building's footprint the same as my others to keep the village layout modular (still haven't built the hillside yet). 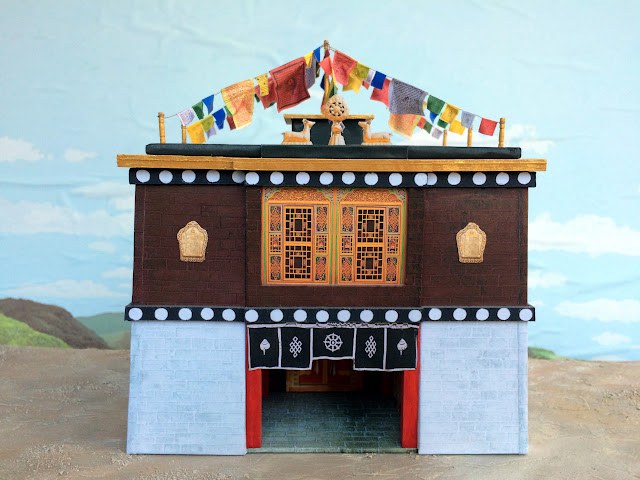 The inspiration for the design came from images of two monasteries I found online, which are shown below:
Since I haven't really shown an construction photos with my previous buildings, I though I'd include some here. Work started with an inner card core glued down to a card base.  The base extends out from the core to hold the slanted outer walls in place. As this building will have an open entrance, I had to incorporate the slant into the entryway walls. 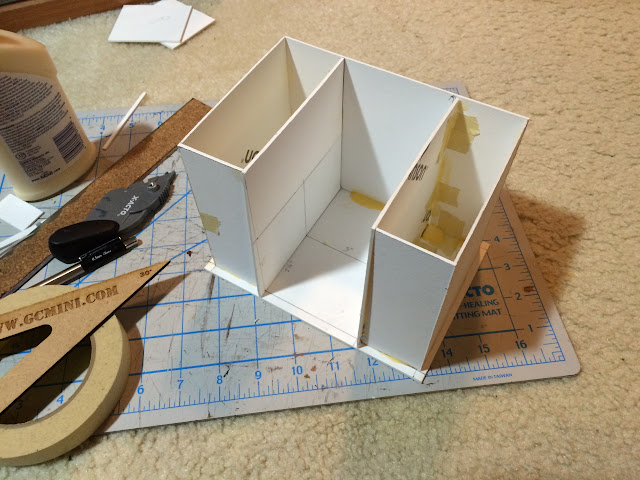 This shows how the outer walls get glued into place.  As I never seem to be able to get everything completely square, I always use the core as my guide when cutting the outer walls to shape. 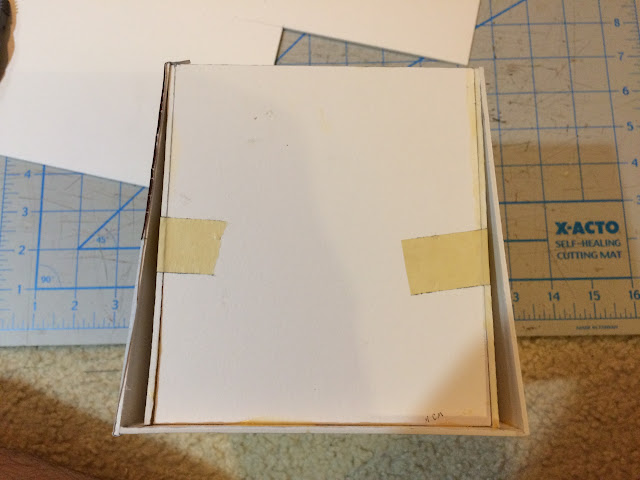 For the windows, I cut holes out in the outer wall, then mount the windows behind on sheets of heavy paper (usually sections of manila folder). This helps give a little extra depth to what could be a very flat looking paper building. Strips of paper rock texture are used on the corners of the building to hide the joints. 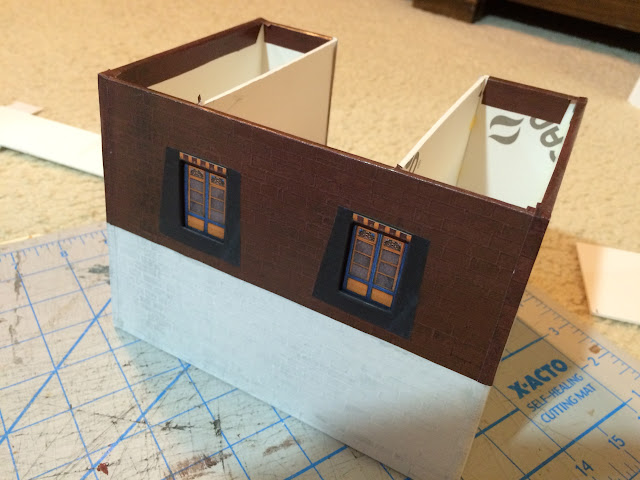 For the entrance, I have cut sections of basswood down to appropriate lengths to form columns, then used bits of card covered in Tibetan temple textures to form the walls. This provides extra support for when I glue in the upper balcony level. 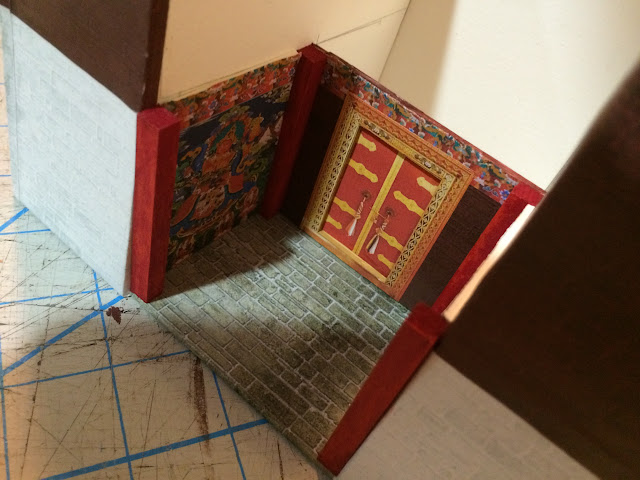 This is the front wall for the balcony, with the window section about to be added. Due to the size of the window, I've upgraded the backing to card rather than my usual heavy paper.  The balcony wall will not be slanted, so I've left some paper overhangs to cover any gaps. 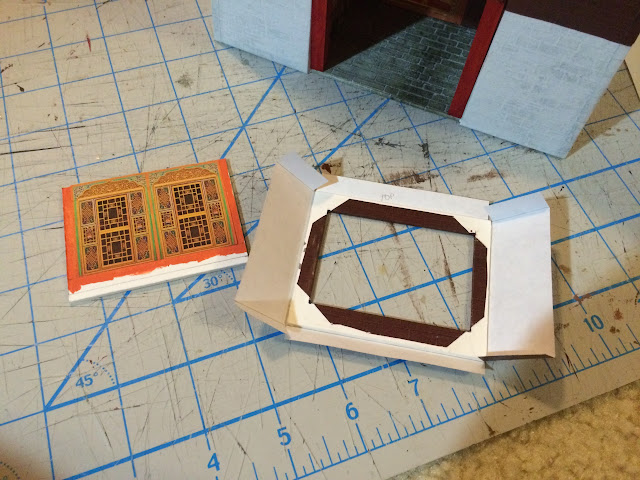 The balcony floor was glued down, and the front balcony wall added. Card sections are added to the side for extra durability. 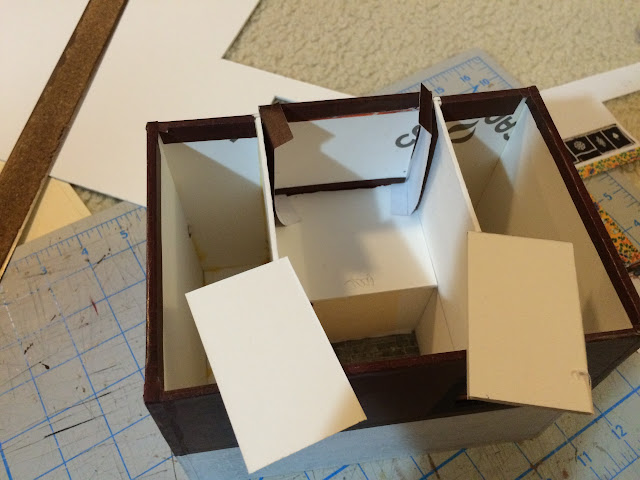 The assembled upper balcony level with a view of the entrance details. The border of the white and burgundy bricks isn't completely even around the building, so the seam will need to be hidden with trim. 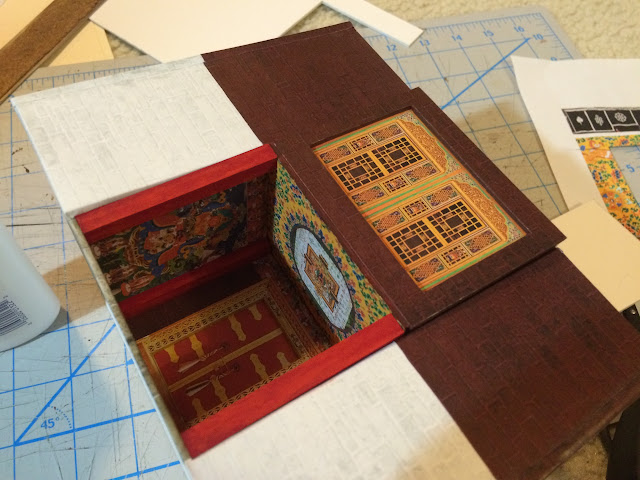 The trim, window coverings, curtains, and icons have been glued to the building. For the curtains, the images were glued to manila folder sections for extra strength. 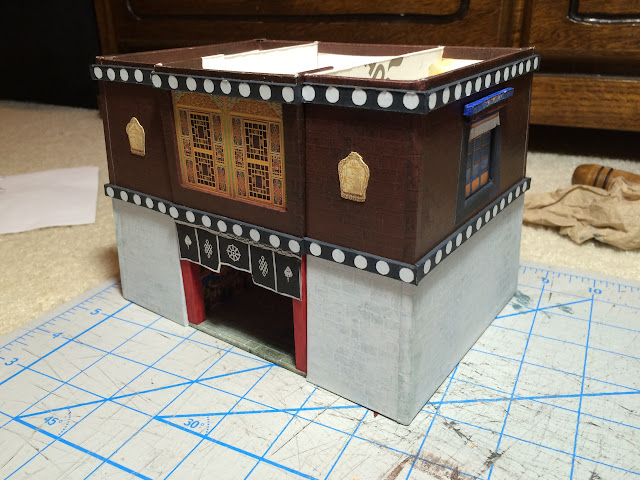 With the building complete, I turned my attention to the roof.  I wanted it to be removable, so I cut the card slightly larger than the building top, then edged the underside with strip styrene to form a lip.  The small, raised wall on top was cut from foam board, then wrapped in black paper.  Liquitex natural sand was used to texture the roof, leaving some of the card uncovered in preparation for the central tower.  Section of decorative toothpicks were used to create the roof's corner pieces. 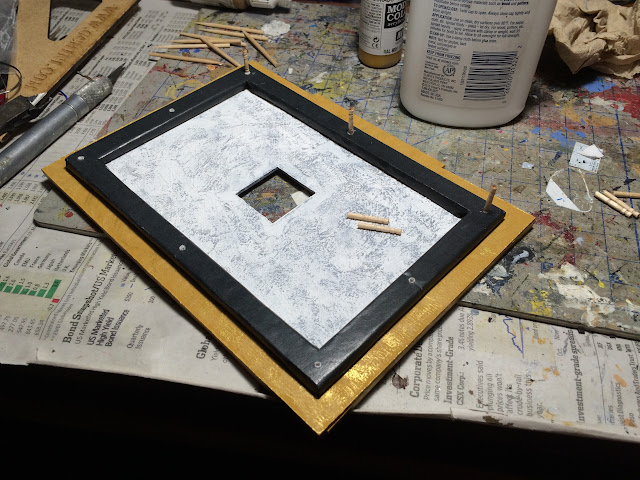 The central tower has been added, and jeweler wire (painted tan) strung between the posts to support the paper prayer flags. The Tibetan temples often display a dharma wheel and deer on the roof, so I have added those elements as well.  I had hoped to create something a bit more 3D, but didn't have much luck.  As such, I used 2 copies of a photograph glued to either side of some clear plastic (lined up using a bright light), then cut out the shapes.  Though not ideal, it should be fairly sturdy and I hope the prayer flags will help hide its 2D nature. 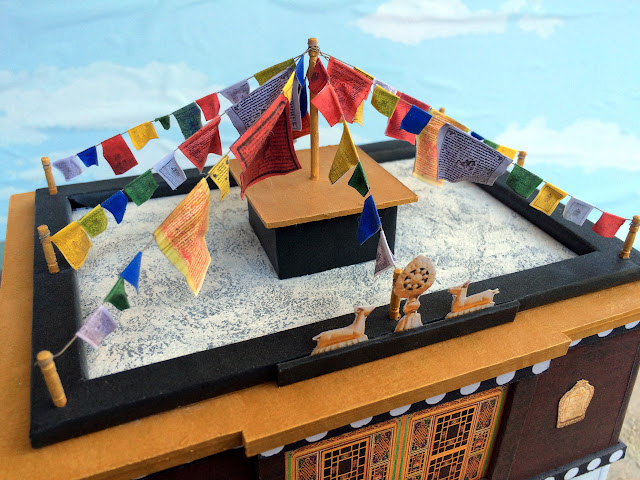 Here are a few more shots of the final piece, which has been sprayed with matte sealant to protect the paper.  Overall, I am really happy with the final product. 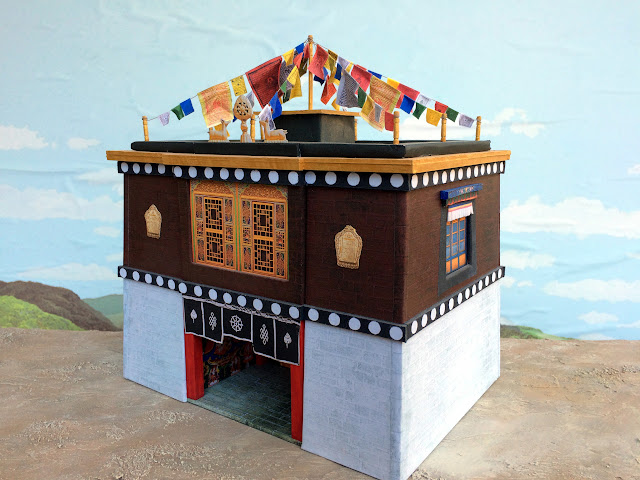 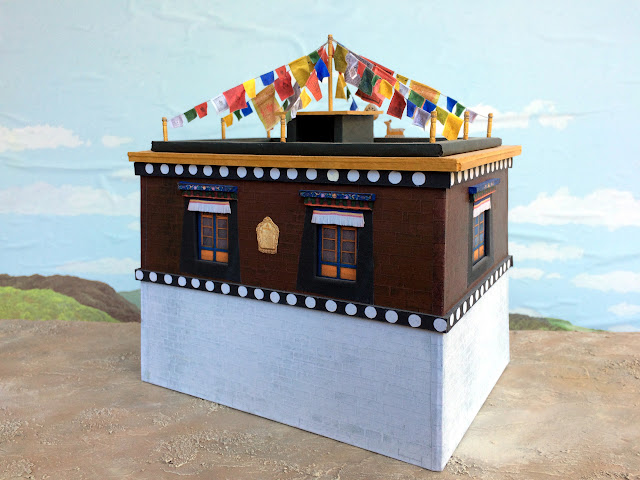 Note: I have now put part of my architectural details collection online.

Email ThisBlogThis!Share to TwitterShare to FacebookShare to Pinterest
Labels: Back of Beyond, Terrain
Newer Posts Older Posts Home
Subscribe to: Posts (Atom)