Completion of my CIB/East African Force for WW2

So my tropical British force for Bolt Action is finally complete with the addition of the last of the command, weapon teams, and vehicles. 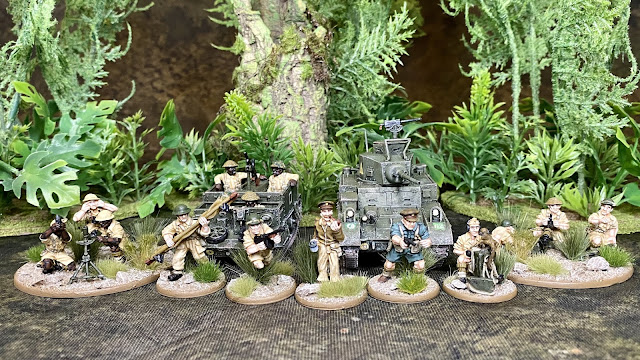 The command section is made of metal 8th army figures from Warlord (plus one plastic) that have either been given a generic look or marked as members of the Royal Norfork Regiment out of Singapore. 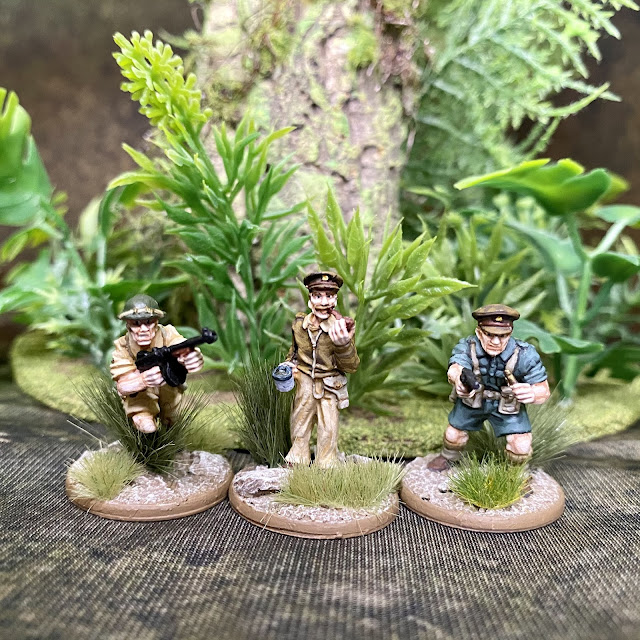 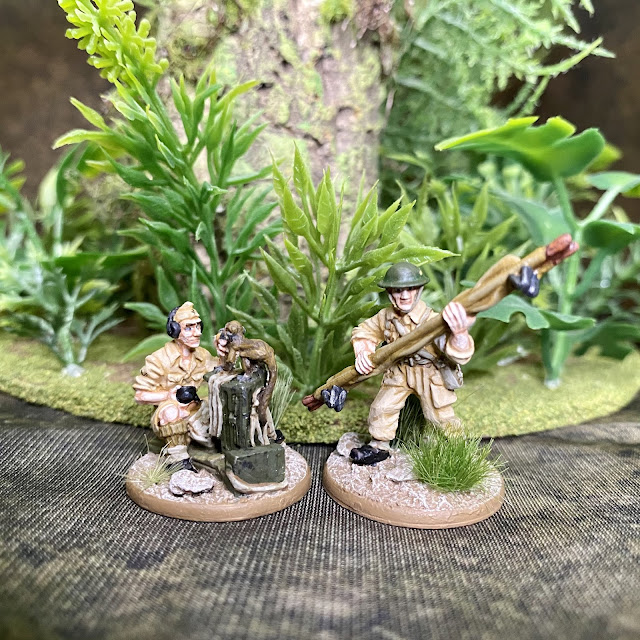 The heavy mortar team are painted as members of the 81st (West African) Division, while the machine gun team is another group of Norfolk soldiers.  These are again Warlord metal figures. 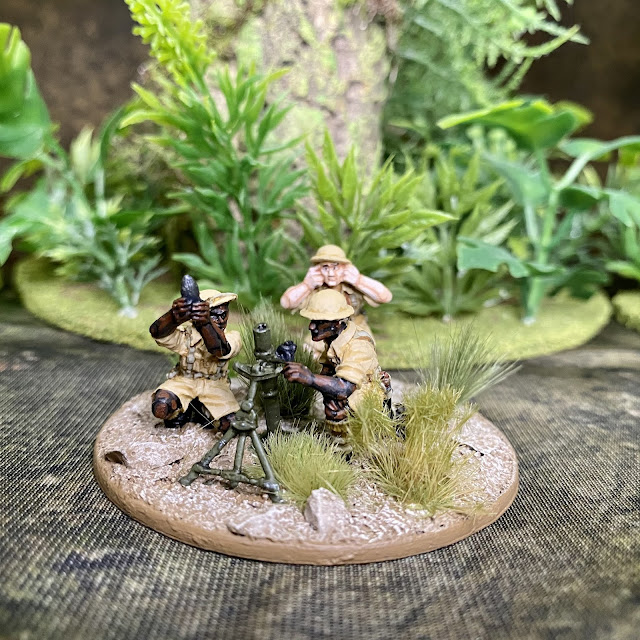 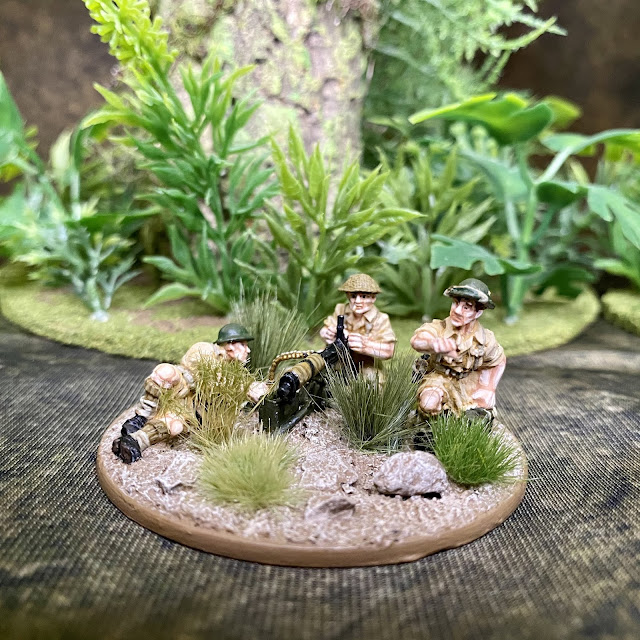 Finally, I have a few more vehicles for the army.  For this part, I cannot emphasize enough how useful Jemima Fawr's blog was in figuring out the paint colors and markings.  It is a treasure trove of information.
The first piece is a Universal Carrier Mk. II, produced from the plastic Warlord kit.  I've painted it as part of the 81st's Recce Regiment. The kit comes with the decals for the unit number, but the Anansi insignia decal had to be created from scratch. As it seems a lot of African troops did not know how to drive, I wasn't sure if the white NCO would sit in the forward gunner seat as in Europe, or need to drive the carrier. I opted to go to with the driver's seat; worst case if I'm wrong, the African driver could have been killed and he is stepping in. 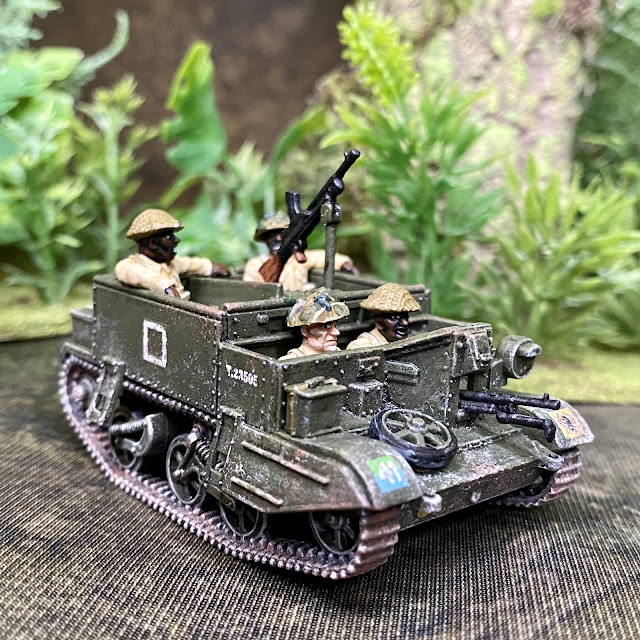 For the M3 Stuart, I've opted to paint it as part of the 2nd Royal Tank Regiment, under the 7th Armoured Brigade. Jemima's research showed that for some reason the 7th Brigade did not follow standard marking patterns and reversed the position of  the unit ID and unit icon on the fenders; as such, I've done that on my tank.  The kit decals did not include the appropriate markings for Burma, so I took the number from the above UC kit, and made the green version of the jerboa icon. 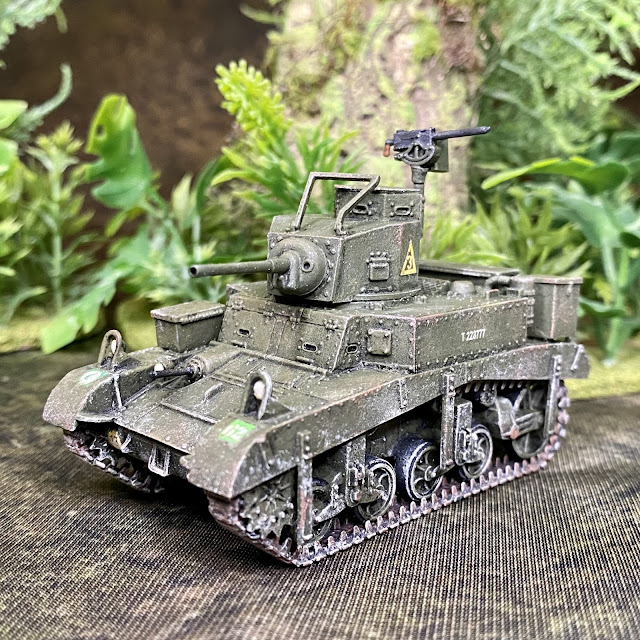 With that, my army's storage box is full and I'm considering this Bolt Action force complete. I'm very happy with the final composition and I think this should give me a good modular skirmish force that I can adapt various timeframes and battle locations.

I needed a bit of a break from the Burma project, so decided to return to my slowly developing Chinese urban project for WW2 and Back of Beyond gaming. 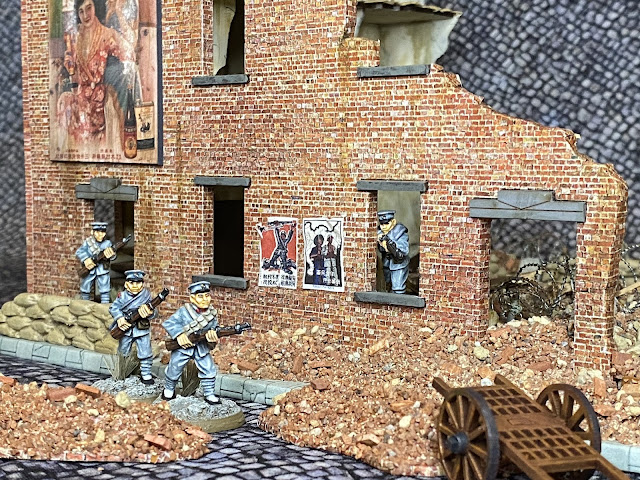 This block of terrain is a set of ruins built from some of the 4Ground Stalingrad modular ruins range. While the kits can be built without any further painting, I opted to make a fair amount of modifications to up the visual appeal and have the finished product better blend in with my other Chinese buildings. 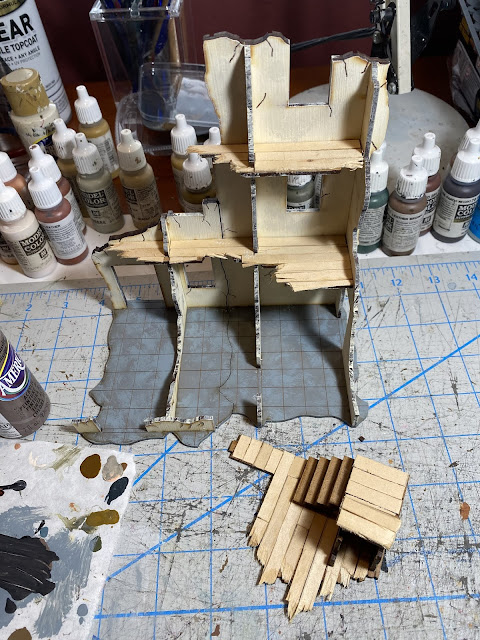 To give the flooring a more damaged look, I opted to cover it with sections of distressed balsa wood. These were painted a medium brown to mimic stained wood and further emphasize the damaged portions.   The flooring and interior walls were also hit with some drybrushing and washes to further add to the worn look of the ruins. At this time the modular sections were also glued together, as I wanted a unified exterior to the building and planned to fill the interior with rubble. 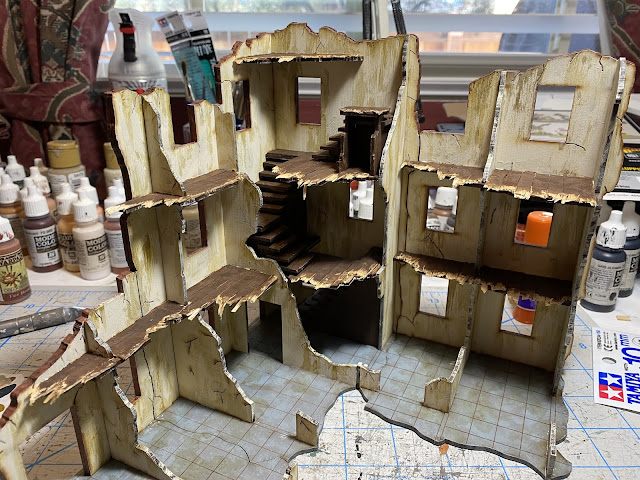 This kits come with an outer layer of grey card that I assume is to mimic the look of concrete, but I opted to cover these with my standard Scalescenes OO model railroad brick scaled to 120%.  I left a fair amount of overhang on the paper so it could be wrapped the edges of the completed walls (already underpainted with an appropriate brick color). 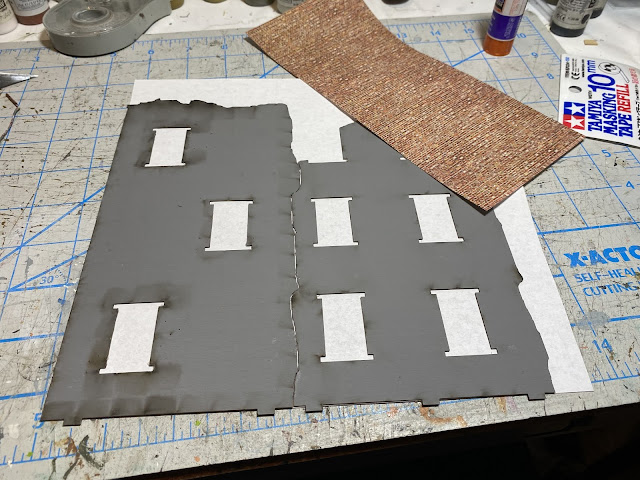 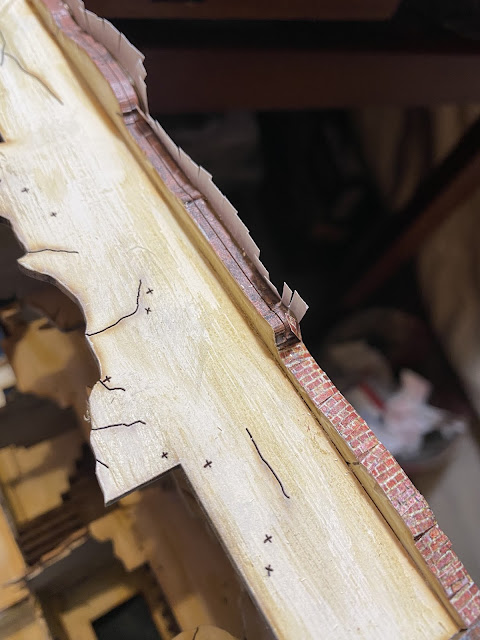 For ease of play, I opted to have standing walls on only 2 of the 4 sides, and to fill the rest with rubble. I thought a nest in the rubble to use as a base or artillery position would be fun, so built a loop of sandbags out of the Renedra kit. They weren't as easy to use as I had hoped, with some poor fits that needed to be trimmed or filled with putty, and repetitive bag patterns. I did my best to hide most of the sins on the outside as I new that would be covered by the rubble. 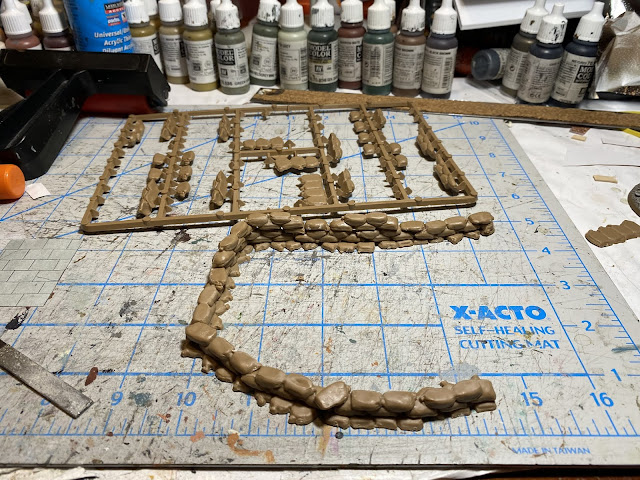 With the building and sandbags glued to an appropriate base, I started to build the rubble piles out of carved sheets of foam. 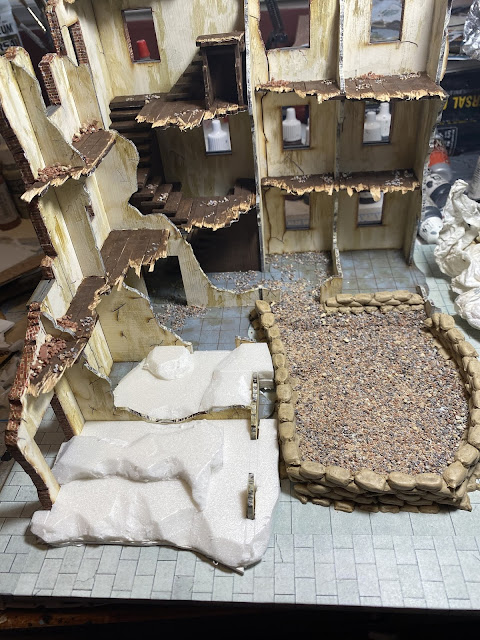 These were given a coat of appropriately colored paint, and pieces of brick paper were glued in irregular orientations. While not critical to have the paper covering every part, I find it particularly useful on steep sides where the debris may not stick as densely. The debris itself is a mix of various rock sizes and colors, along with some 1:48 bricks from Juweela, glued down with a thick coat of white school glue. 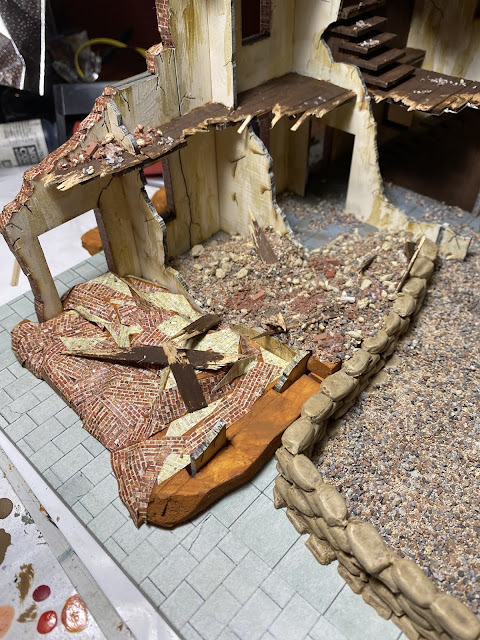 Here is the wall side of the kit. Various dirty washes have been run over the brick paper (previously sealed with matte enamel varnish to help prevent warping) and the billboard for insect spray. To add further wear to the billboard, I rubbed a wet finger over some sections to rub off the image and expose the white underneath. The door that leads to the sandbag emplacement has been fortified with additional sandbags. 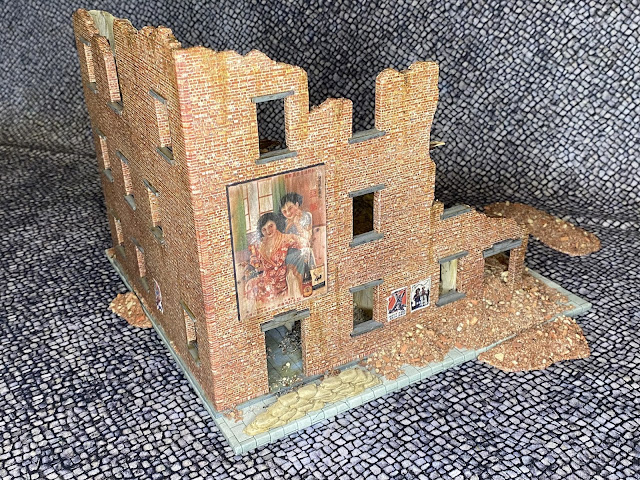 And here is the collapsed side with the built in sandbag nest. It's large enough that it can house a complete squad, medium tank, or artillery emplacement. The perimeter has been edged with two layers of weathered GaleForce Nine barbed wire for additional security. Lastly, I've also created some independent rubble elements to allow the destruction to spill off the base and into the street. 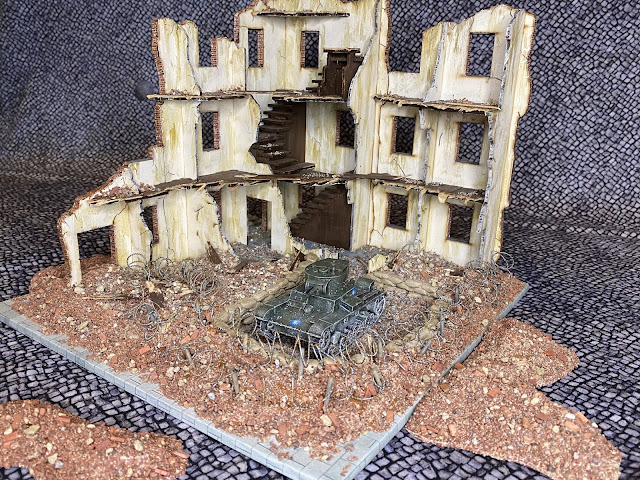