The western aligned forces have expanded again, with the addition of elements from the French 1st Marine Infantry Parachute Regiment (1er R.P.I.Ma) and the Malian Army. 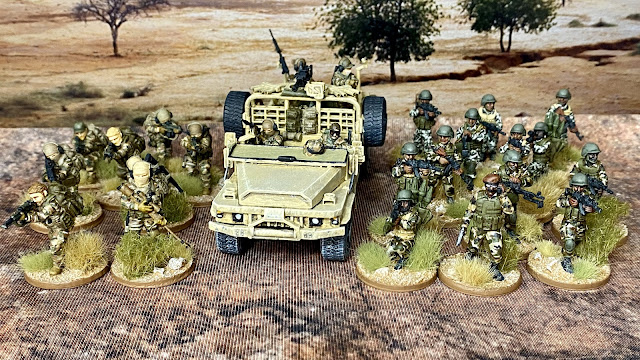 First up is a special forces version of the VLRA truck from JJG Print 3D. This is a fairly large vehicle, approximately 12cm long and 4.5cm wide, when printed in 1/50 scale. A 1/56 version is also available. 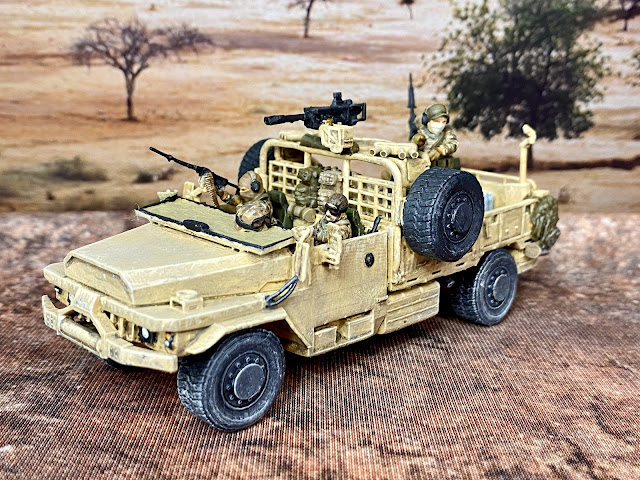 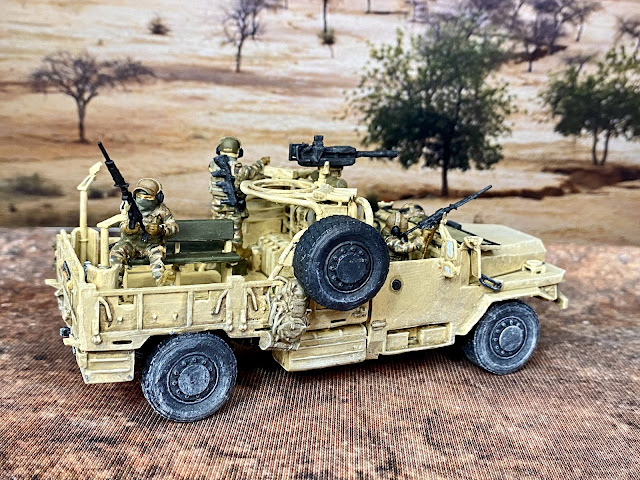 The crew is sold separately, and to fit the figures in the cab, you will need to trim back the feet and also temporarily cut out the steering wheel to position the driver. 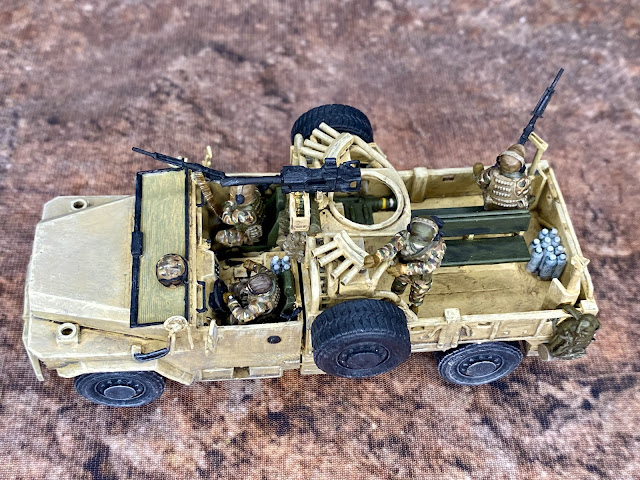 Despite JJG packing the box well, the trip across the Atlantic still resulted in a lot of breakage, with all of the guns and side mirrors being broken off, and 3 out of 4 wheels also broken. The front assembly took the worst of it, being shattered into 5 sperate pieces before I pinned it back together (I also got the rear tire glued on incorrectly at first, though I finally noticed and fixed it on the final model). JJG did include some extra machine guns and mirrors, which helped significantly with repairs. The only item I couldn't put back together was one of the handles on the grenade launcher, so I did my best to build a new one out of wire. 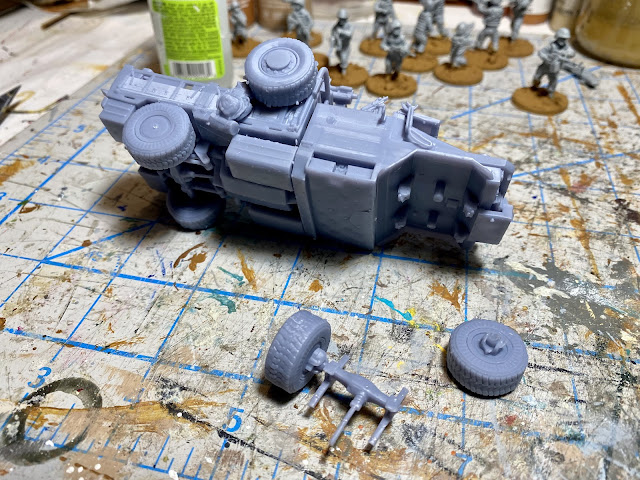 One very odd thing about the crew is they are undersized, being only 25mm foot to eye (89% of the 28mm infantry figures). I don't know if this was due to a printing error or if it's intentional to fit the 1/56 version of the truck, but I felt the final visual of the figures in the 1/50 truck was poor when compared to the P4 and the infantry. 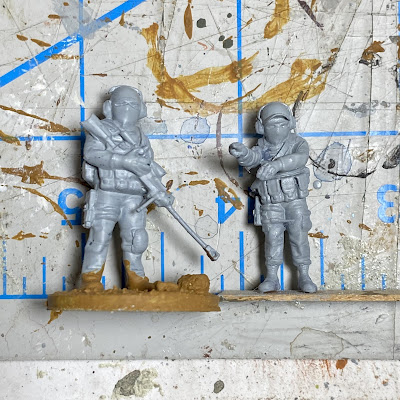 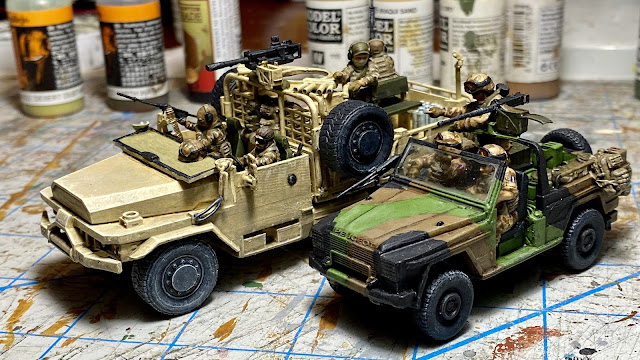 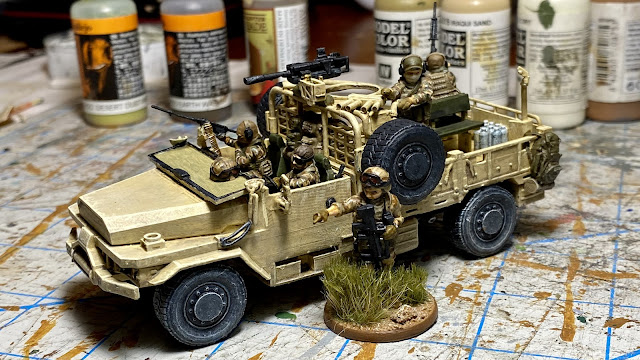 The smaller size also caused some issues in placing the figures in the truck, particularly for the grenade launcher turret. The gunner wouldn't seat properly, so I ended up placing him with the rear machine gun and adding an extra P4 crewmember I bought near the turret (who still had to stand on a box to be tall enough). That said, I think it won't be immediately noticeable when looking down at the table.
For the special forces infantry, I went with a 6-man squad along with a 2-man sniper team from JJG.  These were also damaged in transit, with all but one barrel broken and replaced by wire. 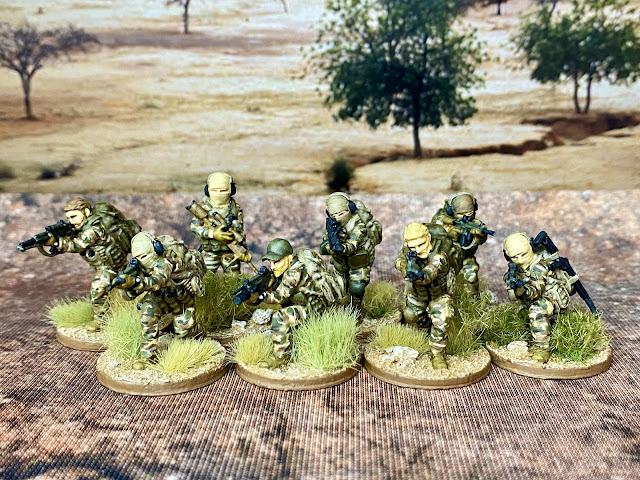 For aesthetic reasons, I decided to only use Multicam on the uniforms, and left the webbing and other gear in plain green and earth tones. In my attempt at Multicam, I used the following paint recipe:
Base: Vallejo 819 Iraqi Sand
Large spots: Vallejo 988 Khaki
Small Spots: Vallejo 875 Beige Brown and Vallejo 893 US Dark Green mixed with AK 3024 Light Green
Squiggles: Vallejo 918 Ivory and 822 Camouflage Black/Brown
Wash: Vallejo Mecha 521 Oiled Earth mixed with Vallejo Mecha 522 Desert Sand
The 6-man team consists of 3 standard HK 416 rifleman, a minimi machine gunner, a grenadier with a M203 under-barrel launcher, and a final rifleman with a Benelli M4 shotgun. 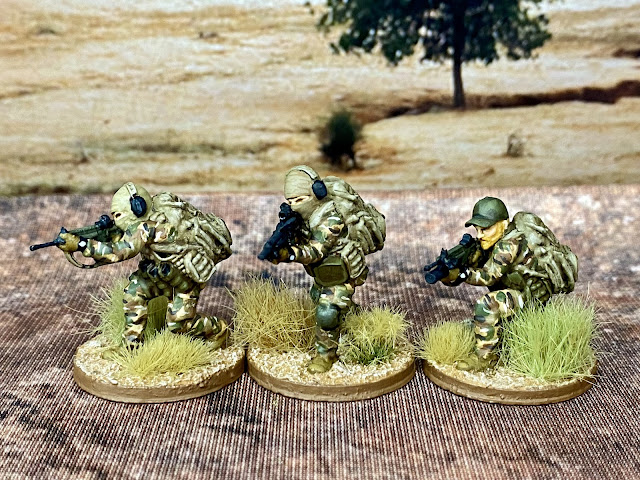 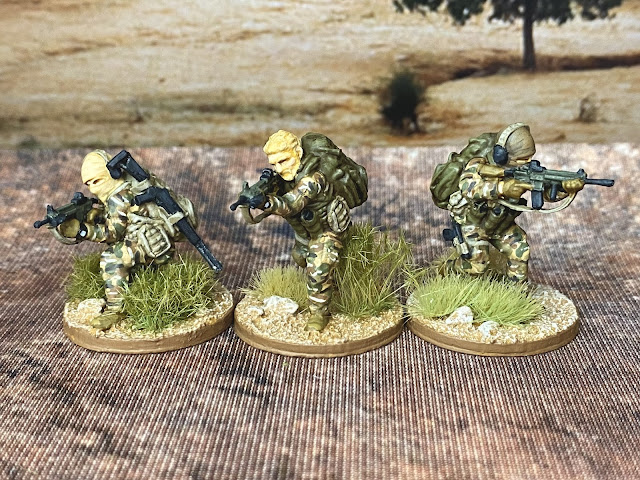 The sniper team consists on one member with a PGM Hecate II anti-material rifle, and the other with the HK 417 marksmen rifle. I've attempted to camouflage both guns according to real world examples. 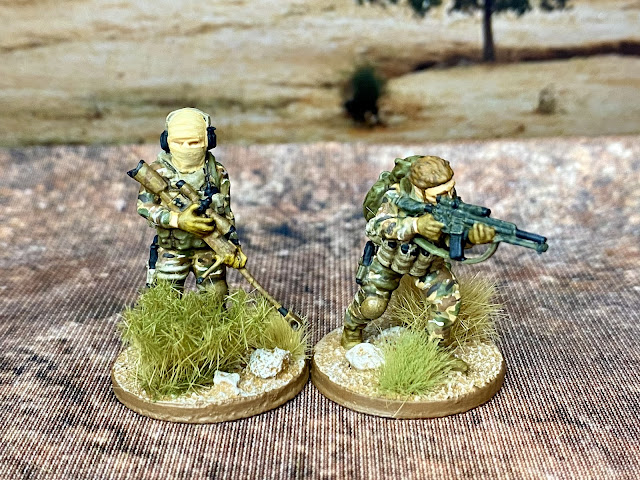 Next up are members of the Malian armed forces. I couldn't find any African figures with the appropriate equipment mix I wanted, so I opted to use Eureka Afghan National Police, along with an insurgent leader from JJG. This resulted in a few figures with facial hair, bit I'm hoping it doesn't look too out of place. 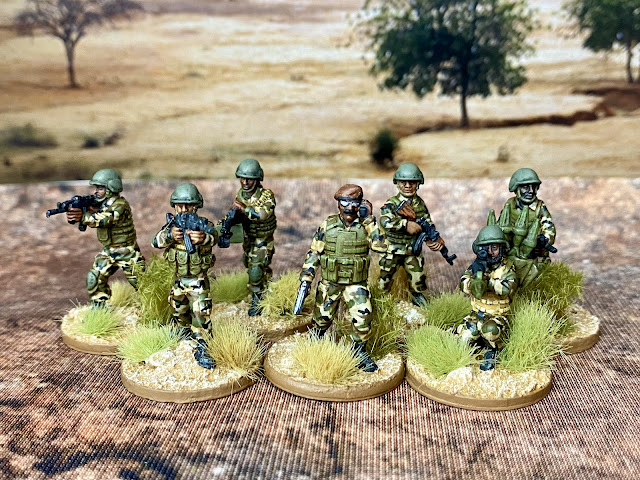 There are quite a few different camouflage patterns in use in Mali, but I opted for Centre Europe Woodland and a light DPM, which I have seen deployed together in photos.
Woodland:
Vallejo 884 Stone Grey, 893 US Army Green, 871 Leather Brown, 950 Black washed with Vallejo Mecha 521 Oiled Earth mixed with 522 Desert Sand
DPM:
Vallejo 971 Green Grey, 896 Extra Dark Green, 822 Camouflage Black/Brown washed with Secret Weapon Green Black 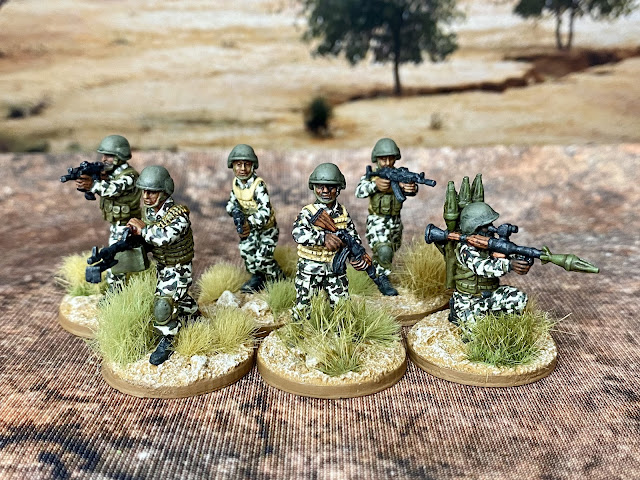 While I am considering adding a Malian BRDM-2 in the future, this will effectively close out my forces for this side and I'll be focusing on more insurgents moving forward.
Posted by Major Thomas Foolery at 6:45 PM 4 comments: