A Detour Through Ethiopia

My tropical British force for Bolt Action will primarily be used in Burma and associated areas, but I wanted the option to use them in Africa against some of the other armies in my gaming group.  To help with that, I've added some troops specific for the Ethiopia/East Africa campaign. 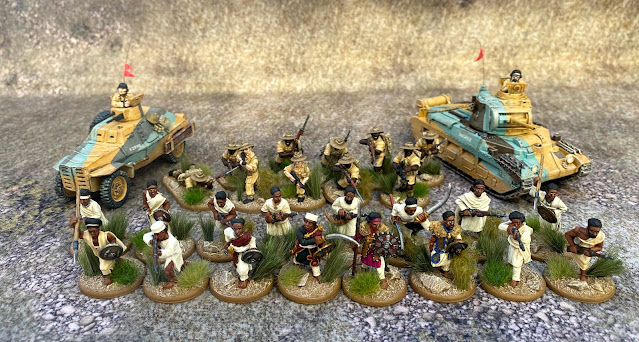 First up are some some local Ethiopian/Abyssinian resistance fighters, produced by Empress miniatures.  The Ethiopian army was poorly equipped when Italy attacked, so most fighting was done by local tribesmen equipped with 19th century rifles, swords, and spears. 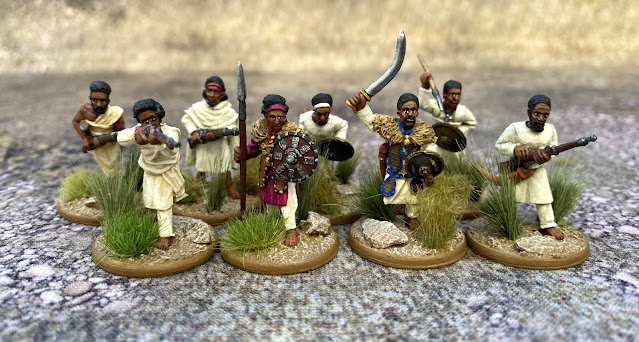 These figures were really well cast and sculpted, with a lot of character in each face. I highly recommend them. 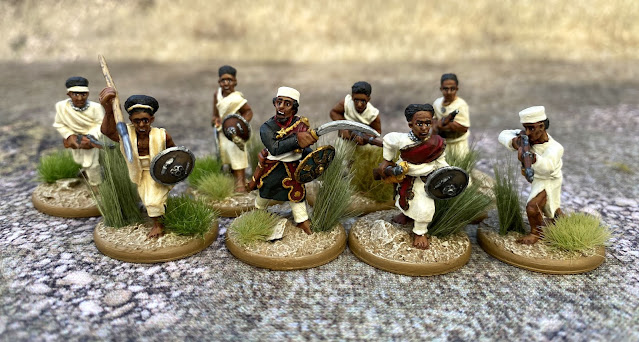 Next up is another group of the 81st West African Division. The bulk of the troops are the Warlord plastics, with two white NCOs created from The Assault Group (TAG) Chindits.  The figures are close enough in style that they blend in well. 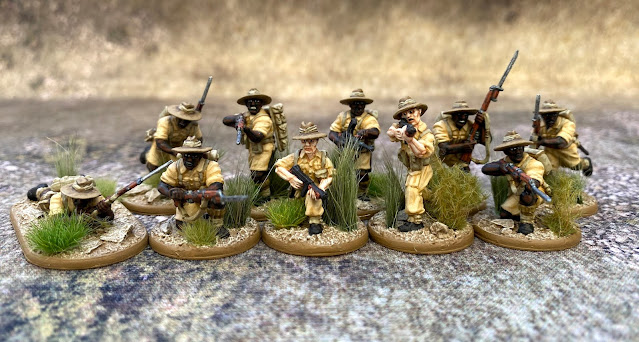 The A12 Matilda MkII is the plastic kit produced by Warlord. You get parts for 3 variants, and I've gone with the African version (minus a spotlight I lost cutting parts off the sprue). It's a really well made kit and includes decals and other support items.  The white and red markings associated with Africa were not in use by the 4th Royal Tank Regiment (4 RTR) in East Africa, so I have left them off. The dark tones in the African camouflage pattern seemed to vary between chocolate brown, a slate gray, or a dark green, and I've selected brown for this tank. 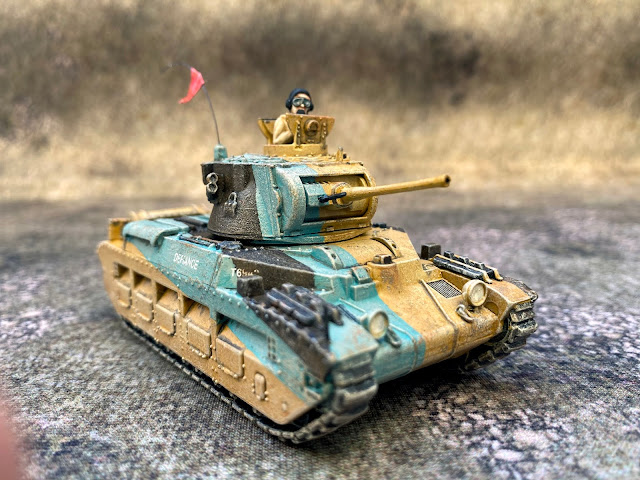 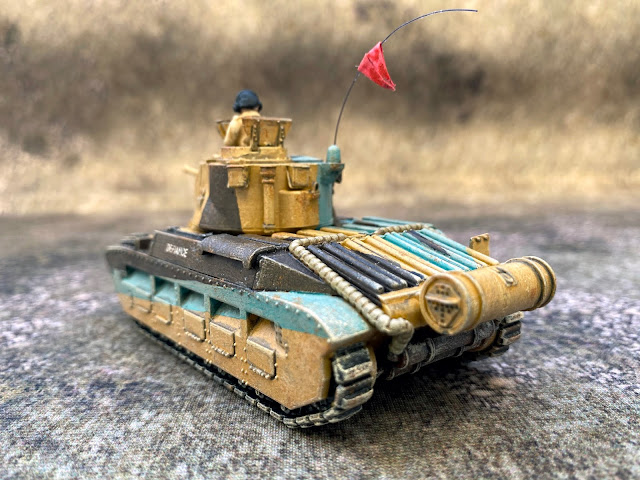 Finally, I have a South African produced Marmon Herrington MkII armoured car from Company B. Now I'm not sure if the MkII was used in Ethiopia or only the MkI, but since nobody makes a MkI, Company B's is the only option.  Sadly, it is not a very good one.  The completed vehicle seen here has been heavily modified by me to get it looking decent for the table.  The images of what you have to start with follow after. 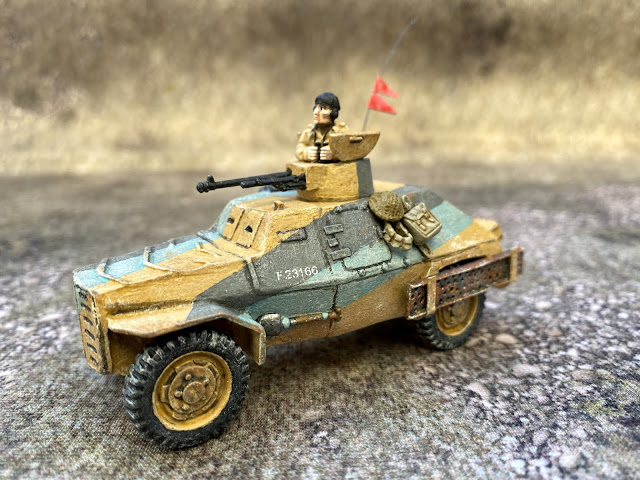 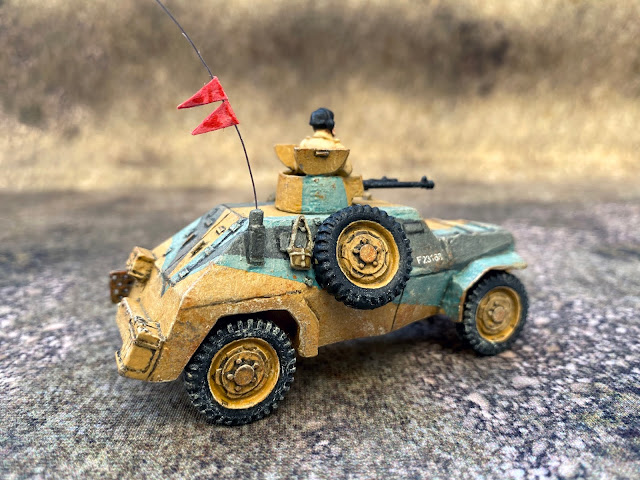 What you start with is one of the roughest castings I have every purchased.  The resin portion was highly pitted, with unacceptable levels of resin build up in areas such as the spare tire. Details, such as door hinges,handles, and appropriate rivet marks, were also lacking The metal wheels and pintle machine guns (not used by me) were cast well enough, but one of the wheel axles was missing its end, and as you can see below, the Boys AT rifle and Bren gun in the turret were nothing more than twisted bits of white metal with no details. Who at Company B thinks this is an acceptable product in this day and age ?!? 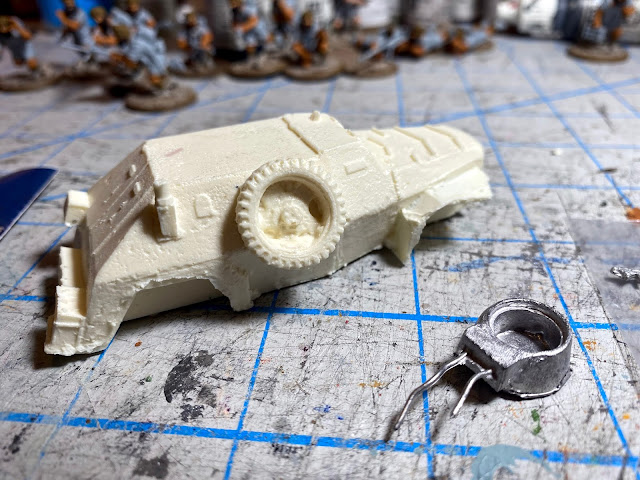 First up in trying to salvage this monstrosity was about 3 hours of filling and sanding to deal with the rough resin texture. For some reason Company B provided 6 wheels instead of the needed 4, so I was fortunate to be able to saw off the resin spare and replace it with a metal one. 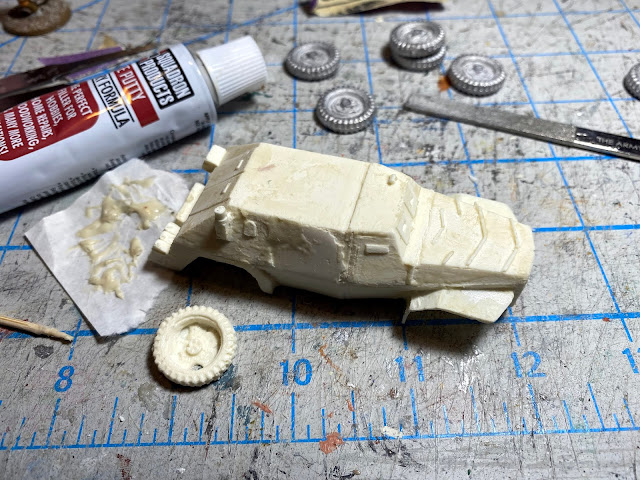 Trying to add the appropriate rivets over the car would have been a nightmare, so I skipped that and only added equipment hooks on the sides. Bits of card and wire were used to add in additional missing details. The final items of equipment hanging from the sides and the commander came from the bits box. As nothing could be salvaged from the turret guns, these were cut off and replaced with plastic barrels from the Warlord Commonwealth infantry sprues. There is also no pivot point for the turret, so you are forced to glue it in a static position. 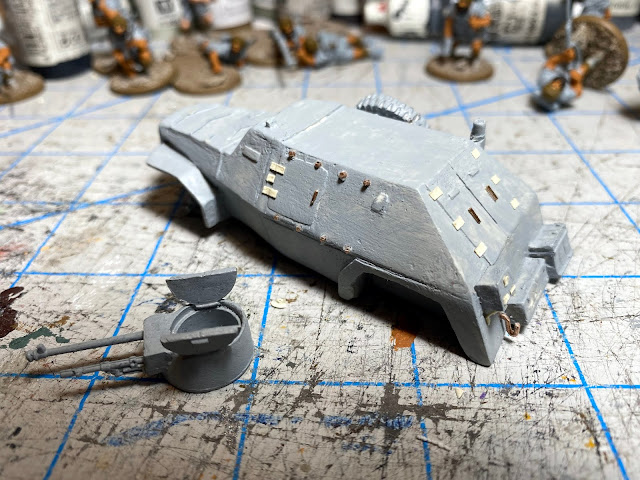 The wheels were also a poor fit, with the front axle needing new posts drilled into it due to the miscasting, and the back wheels unable to fit in the rear wheel wells without padding between the axle and car body. 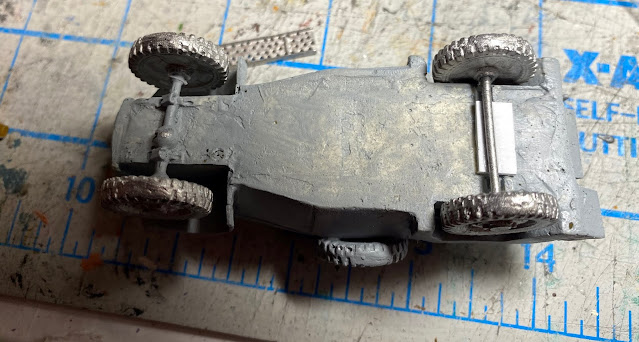 Final judgement is that the Empress, Warlord, and TAG products covered here are worth your money and time, but steer clear of this shoddy Company B product unless you are desperate and have the patience and spare bits to make it look presentable.
Posted by Major Thomas Foolery at 4:42 PM 8 comments: