Presedente for life Somoza would like to welcome you to the  beautiful República de Golfonseca, located on the Golfo de Fonseca between Honduras and Nicaragua. My people love our Yankee brothers and we encourage you to bring your business here, where with the right government sponsorship, our peasants citizens are dying happy to provide your factories with inexpensive labor.

Here is one of our model villages, the lovely San Cristóbal:
﻿ It offers all the comforts an American investor would want:

﻿﻿
﻿﻿﻿﻿We already have one bustling business in town, a ﻿premier cigar warehouse: 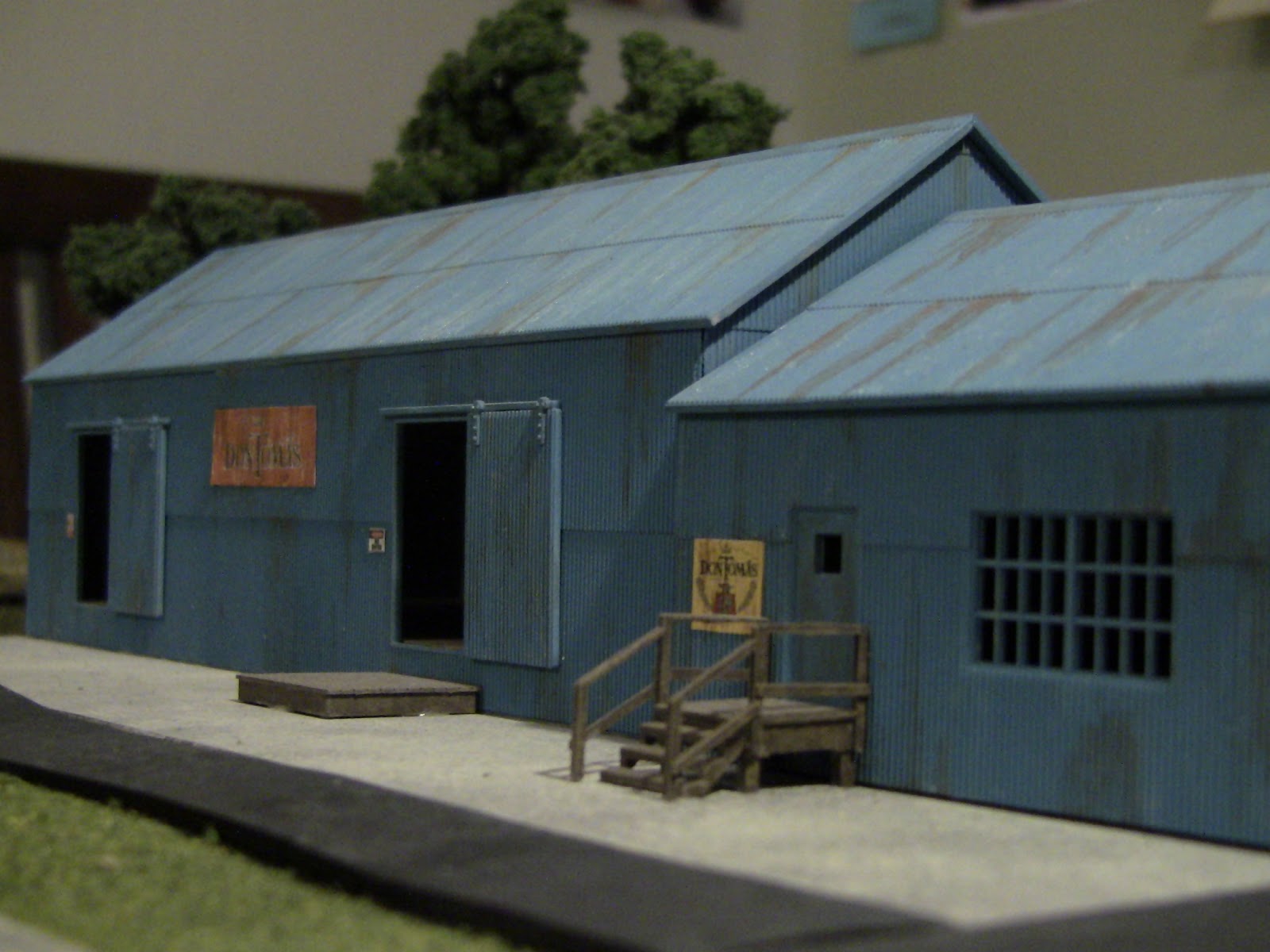 Now many people may try to tell you that Golfonseca is not safe, that those communist dogs the Frente de Liberación Nacional (FLN) will soon control this country. 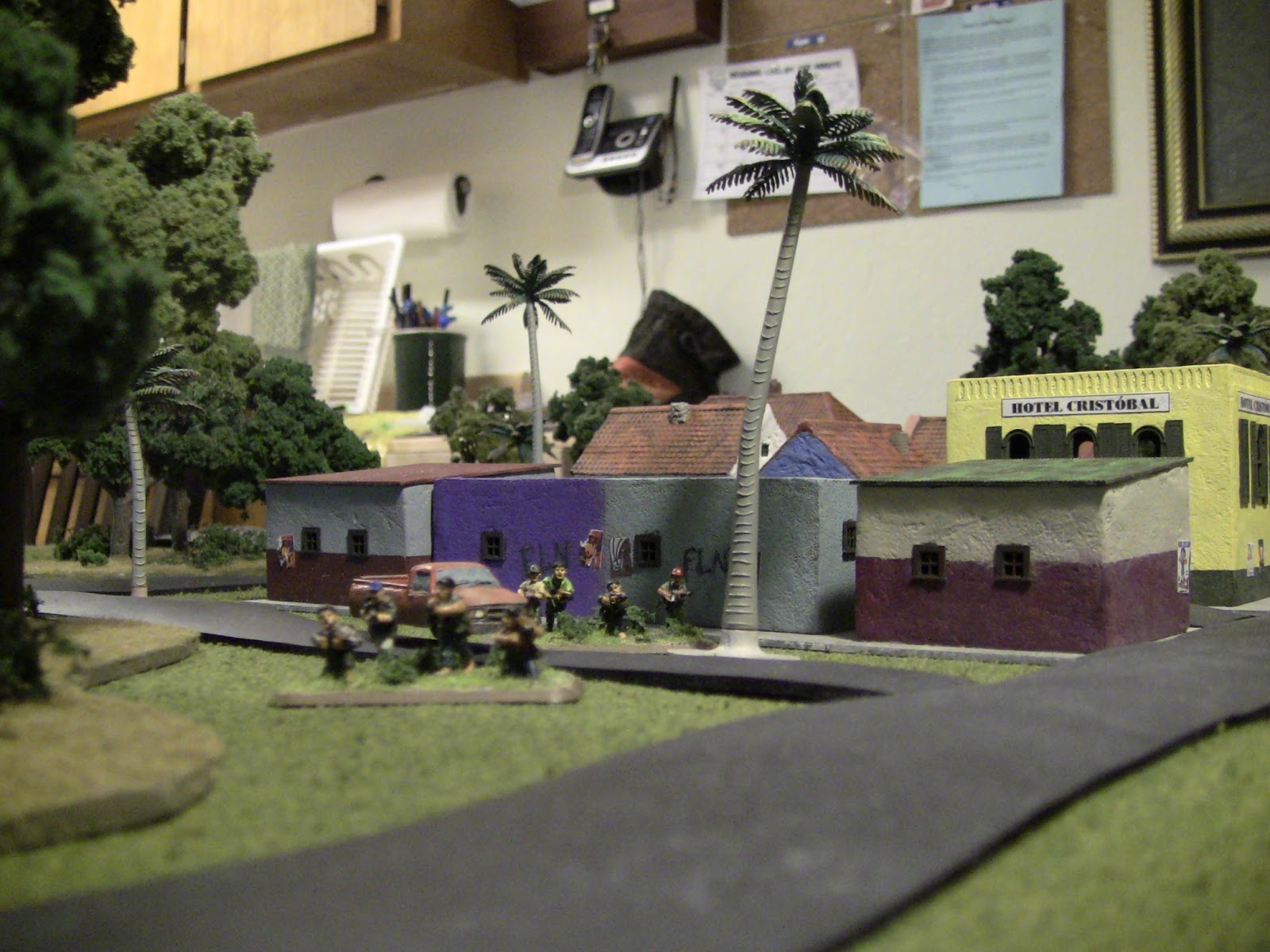 It is all lies I tell you!  My people love me, and the Guardia Nacional ensure that there is always peace with their torturous human rights respecting ways. 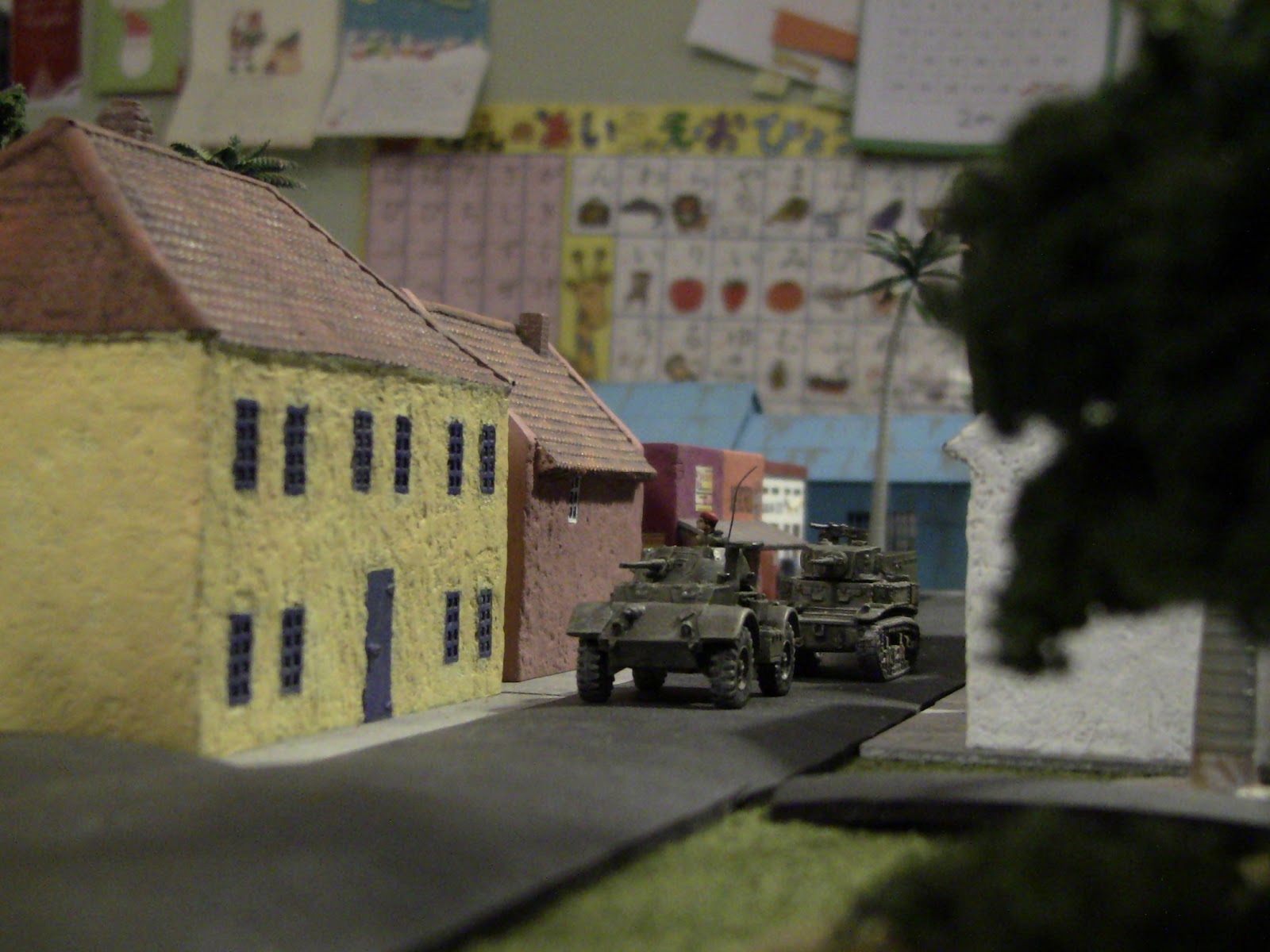 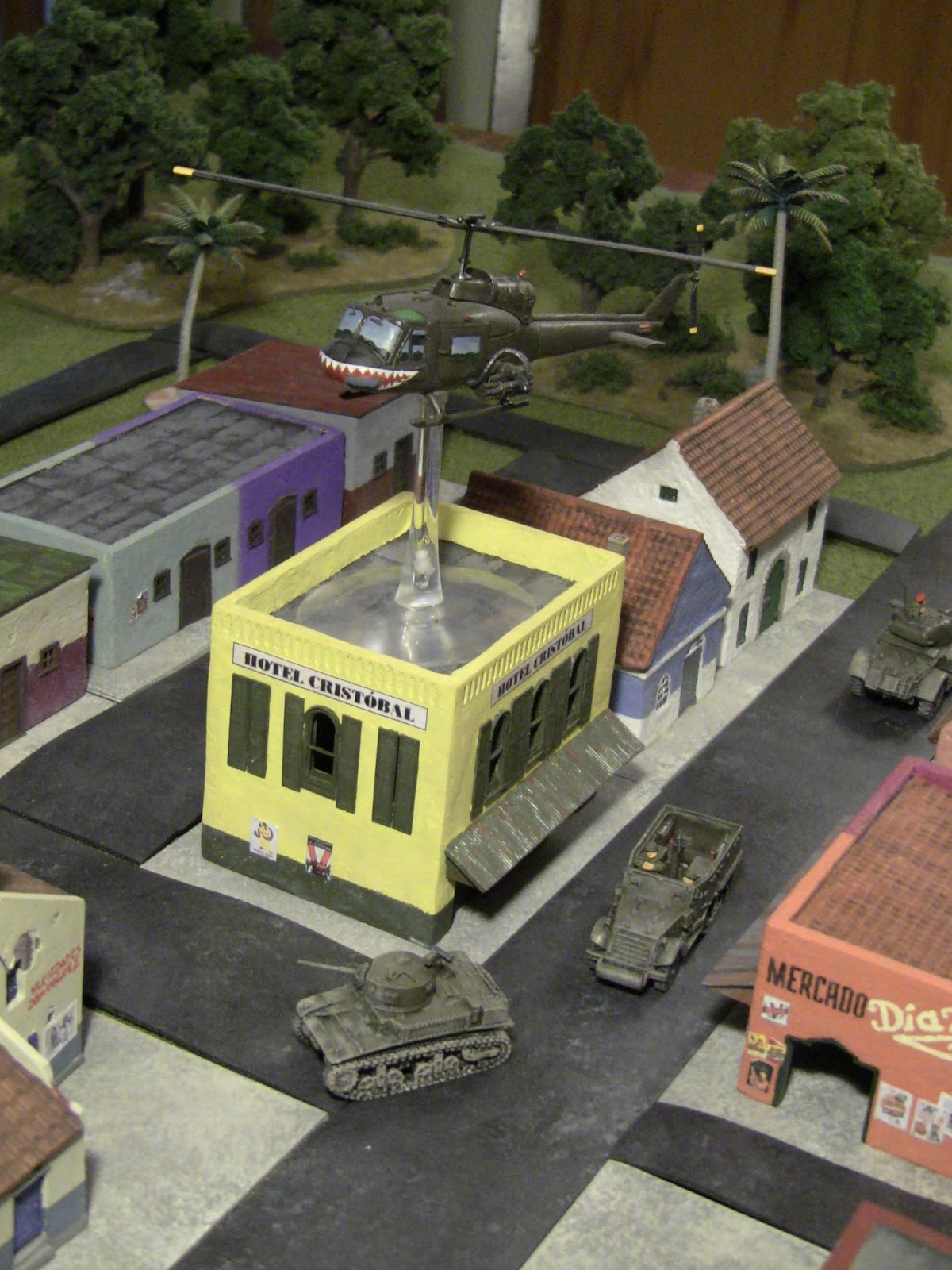 I have been interested in the Cold War battles that raged across the Third World since I was a youth in the 1980's.  Though the AK 47 Republic rules were written for African conflicts, I grew up watching Under Fire, Romero, and Salvador, and really desired to recreate something of the horrors of that time and region in my Imagination of Golfonseca.

I actually started this project last spring. At this time I only have a few of the miniatures painted (figures are currently from Peter Pig and Battlefront) and have instead focused on the buildings.  For this layout, I predominately used buildings from Monday Knight Productions (retextured to give the stucco a smoother finish to match the other buildings), Timecast, and Gamecraft (textured with Liquitex ceramic stucco and finished with model railroad bits, primarily from Grandt Line). I also picked up a Walthers lumber company that was cut down to create the cigar warehouse.

The trees are produced by Woodland Scenics.  Roads were made from tool chest liners purchased at the local DIY store.

For the paint schemes, I was inspired by these photos taken in the Nicaraguan town of Rivas.  The signs on the buildings are actual advertising and political posters from the region that I found using Google image search.

Once I make some more progress on my VBCW project, I'll be returning to Golfonseca.  Until then, please be patient.
Posted by Major Thomas Foolery at 10:49 AM 4 comments:

A few local facists have crawled out in support of the British Union.  Figures from Artizan. 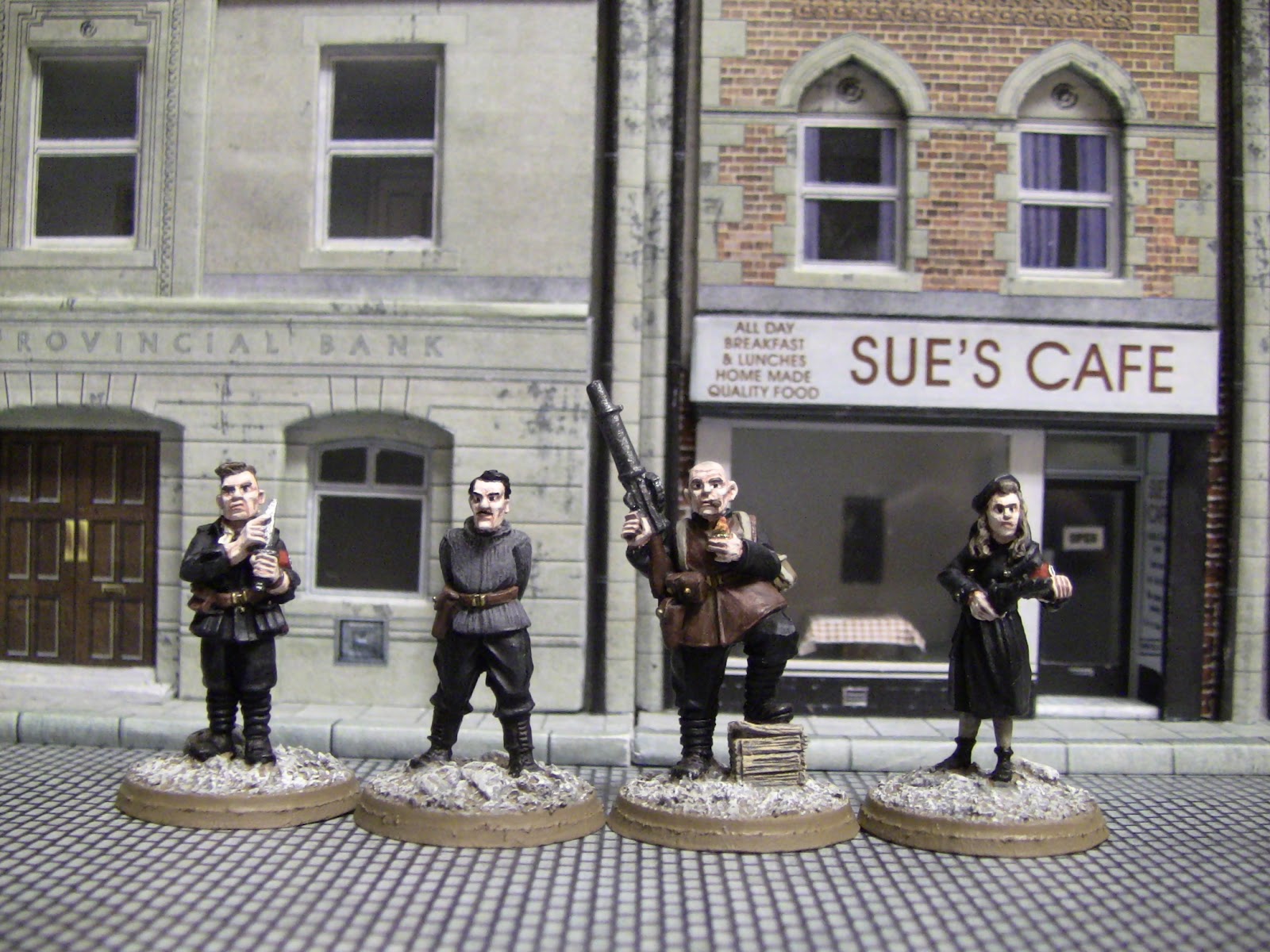 Posted by Major Thomas Foolery at 1:15 AM No comments:

Here are two more shops from scalescenes.com, kit T005 (please excuse the slight fish eye quality of the photos - my wife has the camera with the close-up setting): 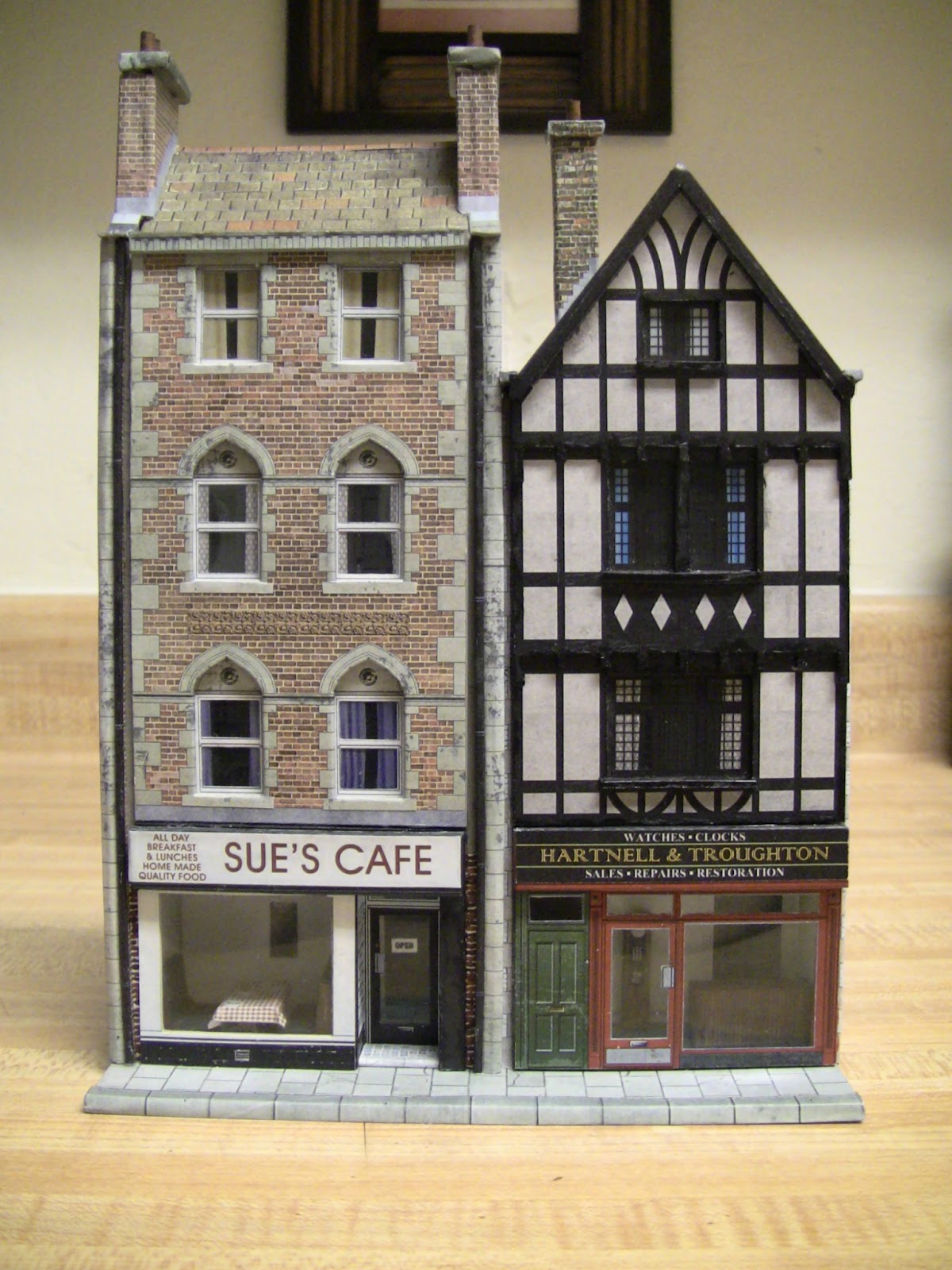 These buildings were previously seen under construction here on my blog.  They show the additional two facade types that come with the kit.  The building on the left is also available in white painted brick. As with all the buildings in this kit, they are half depth. 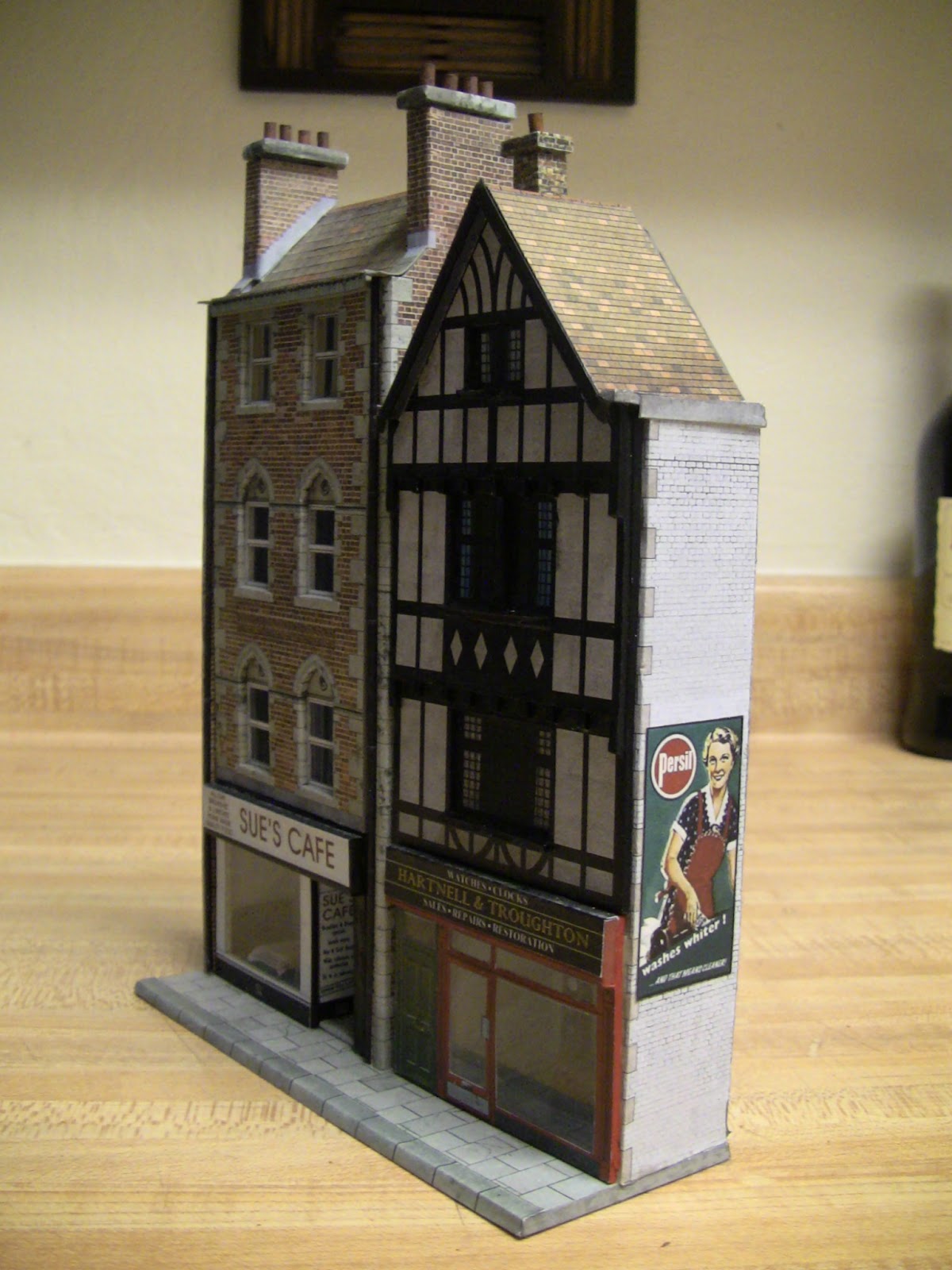 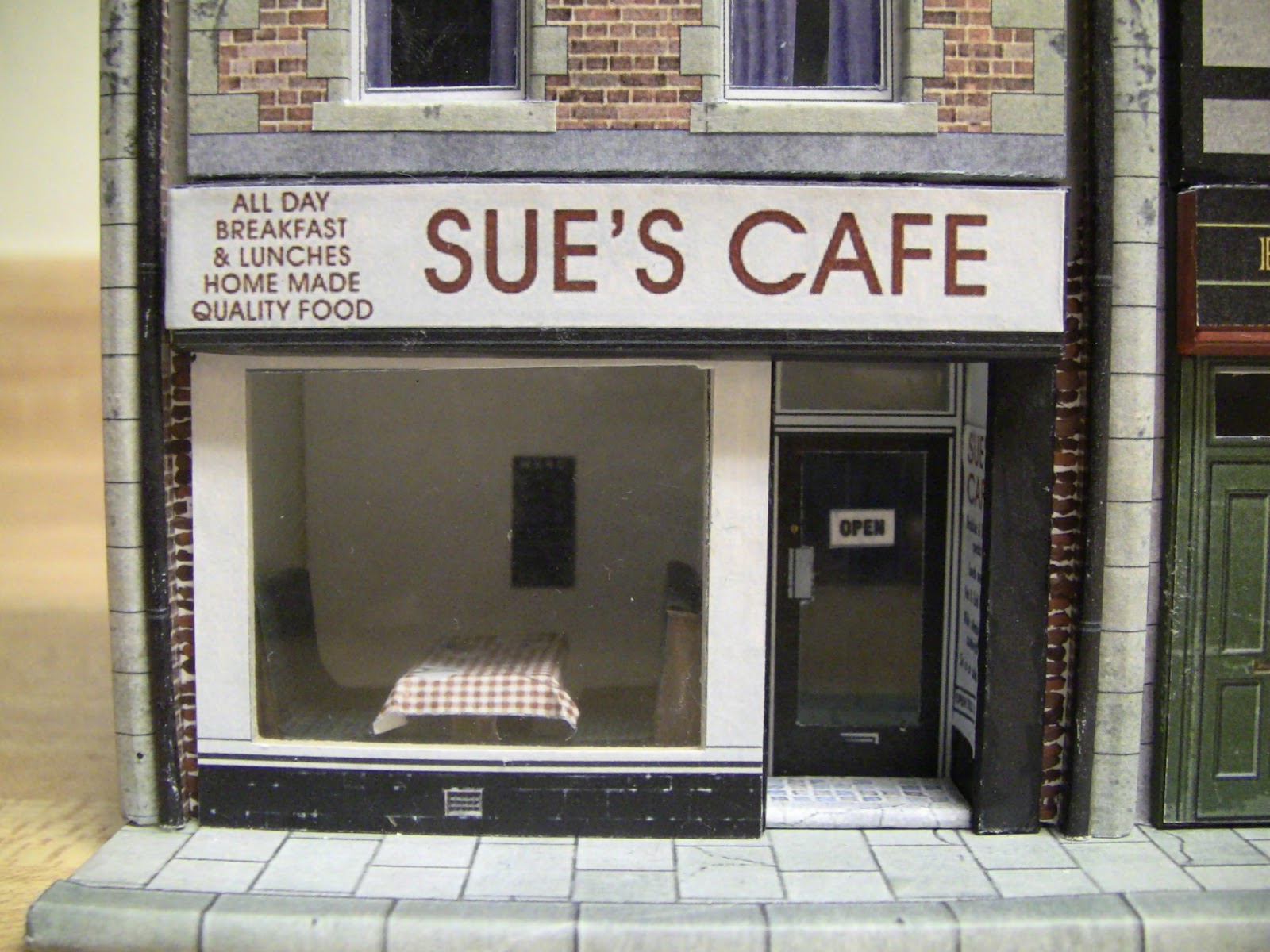 This is a default shop that comes with the kit.  I had hoped to add more seating, but this is all that would fit inside.  To get the table placed right next to the window, I inserted the pre-built shopfront (without the window layer glued on to the frame), placed the furniture through the opening, then glued on the plastic window with the paper decorative framing. The shop front didn't fill the the entire space on the facade between the downspouts, so I had to paint some bricks on the wall card prior to gluing to avoid white gaps.

Next up is my Doctor Who inspired clock shop: 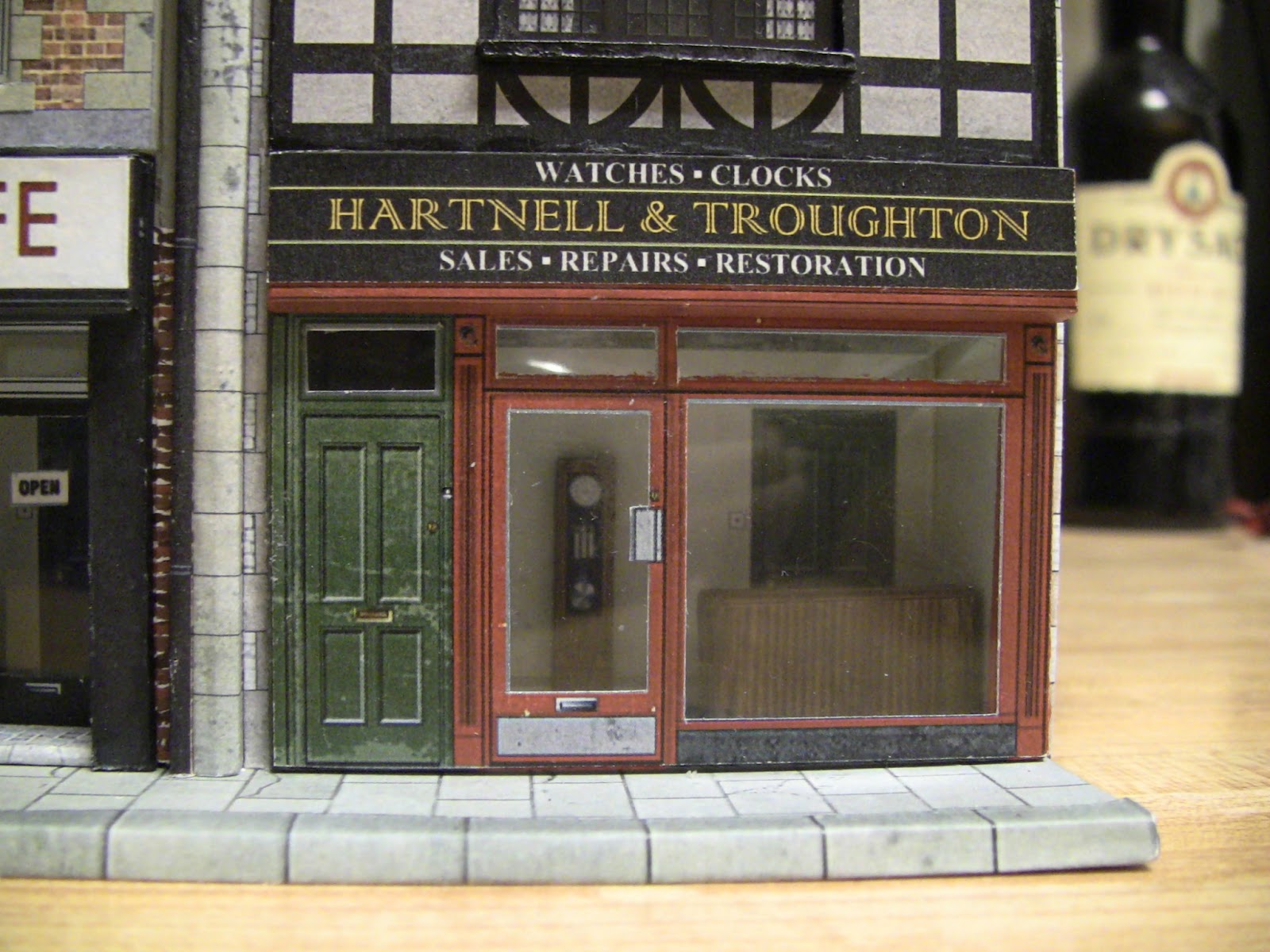 I used one of the blank signs available in the kit, adjusting the font and color with Adobe Acrobat software. This storefront was much easier to assemble than the one with the recessed door.
Posted by Major Thomas Foolery at 2:20 PM No comments:

Fresh off the work table (and still waiting for a coat of matt varnish) is a Vickers Medium Mk. II tank for my VBCW armies: 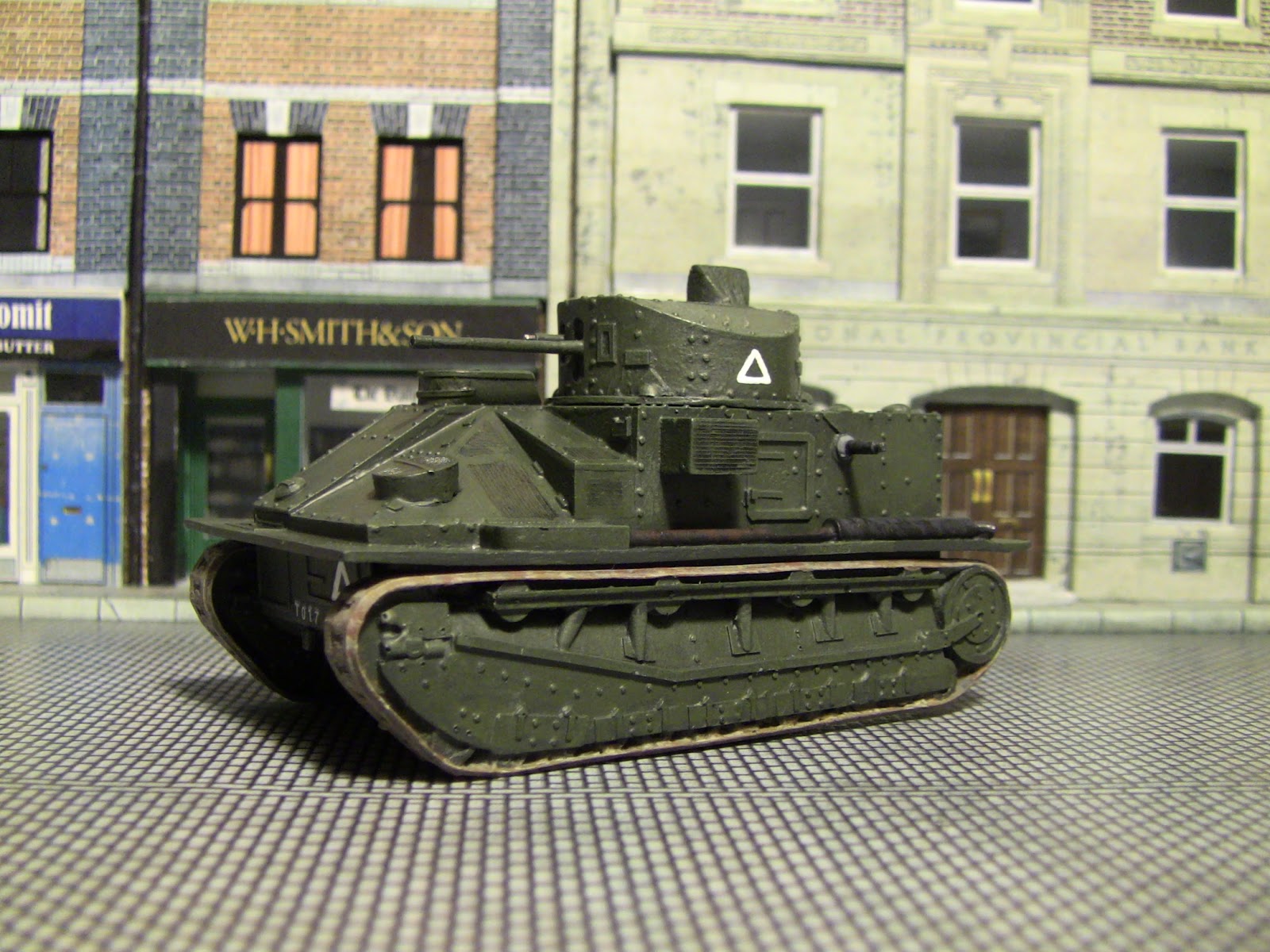 This is a 1/55 resin kit produced by Copplestone Castings. It comes without instructions (or decals), but assembly was easy to figure out after looking at photo references. It is fairly detailed (though not completely accurate in dimensions) and well designed.  However, I cannot say the same about the casting quality. 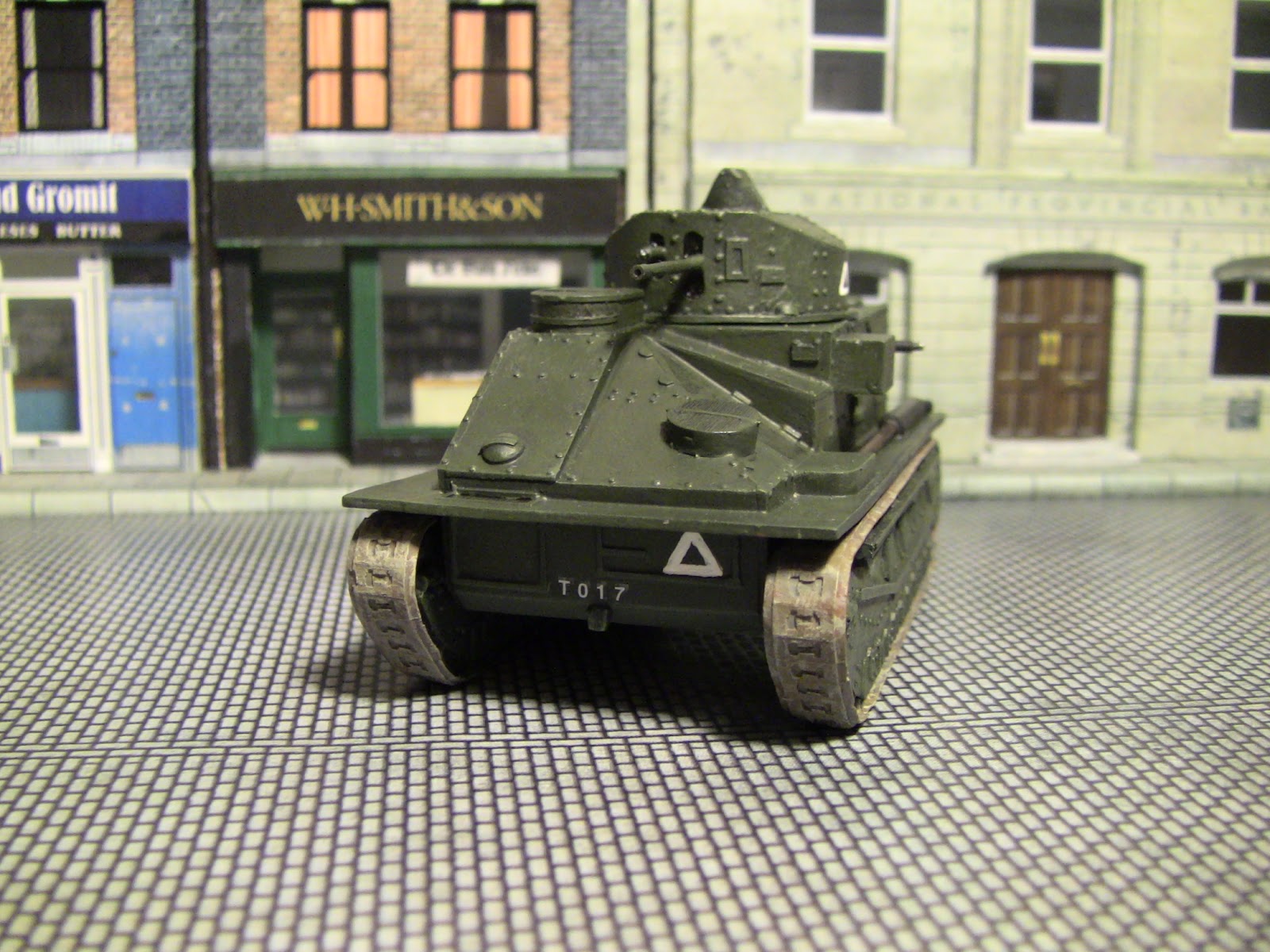 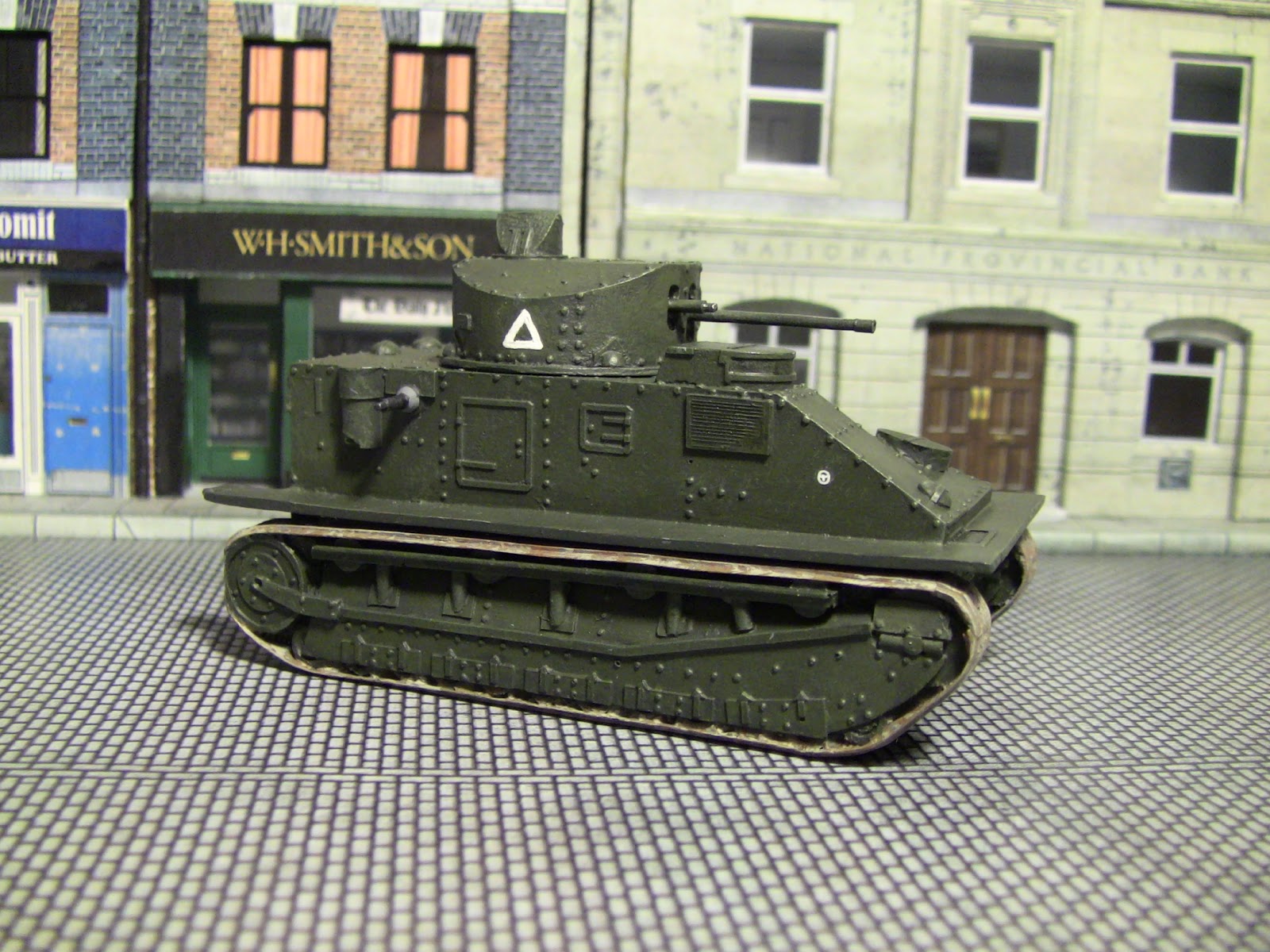 When I opened the kit, I found the decks above the treads were warped, and had to spend some time heating the resin in water and carefully trying to bend them back into position.  The kit also suffered from some large bubble holes in very obvious spots that were tricky to fill.  If you look at the rear of the tank in the photo above, you can see a prime example in the bottom of the curved feature behind the side machine gun. 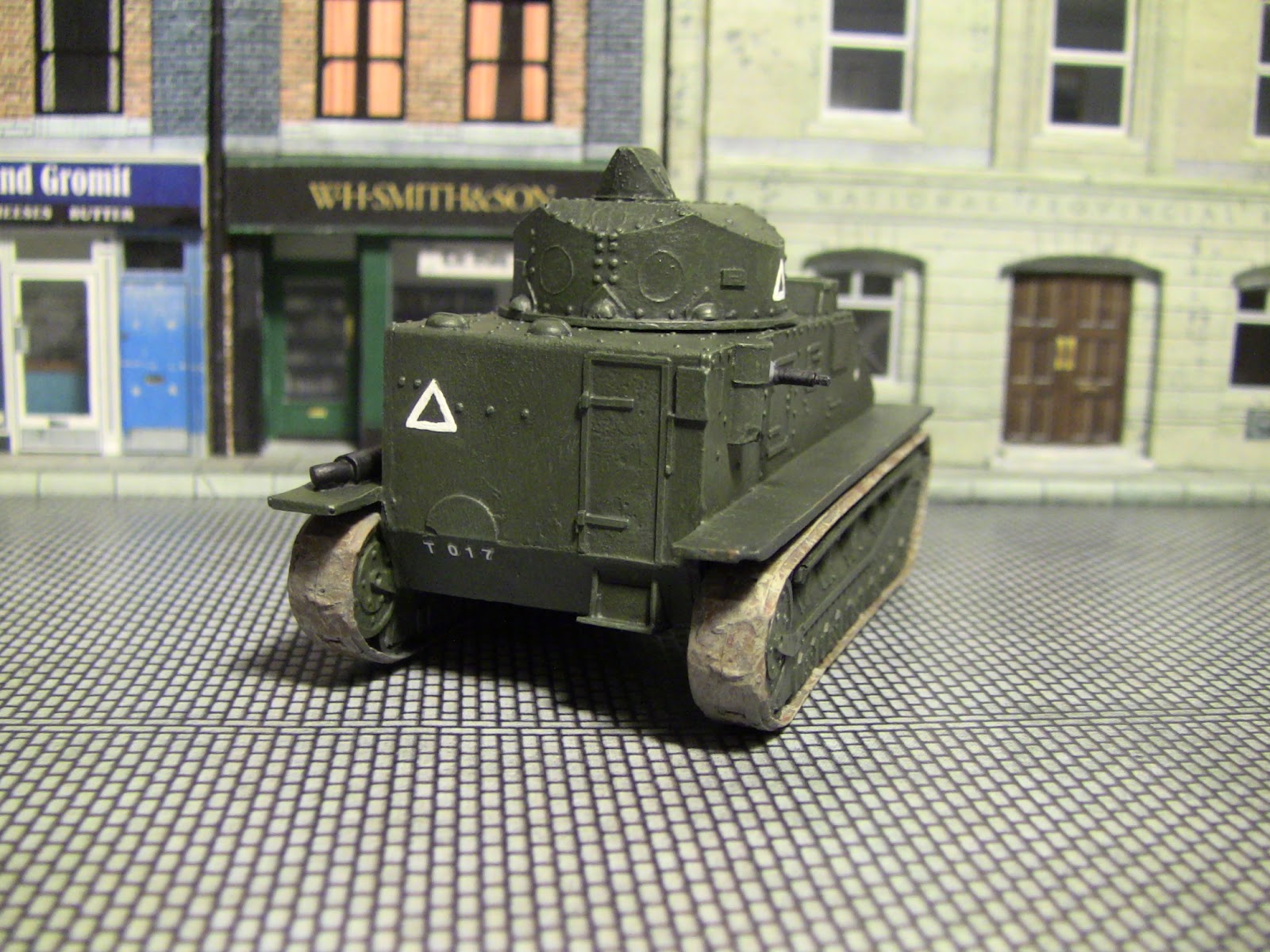 Another issue I have with the kit is the treads.  Rather than make a left and right tread, they have created a universal piece that can be used on either side. While in theory this is fine, is results in really poor casting.  The treads had a lot of pitting and flash under the tread edges that could not be easily removed without risk of breaking the thin tread edges. They also made the fill point for the tread molds the rear of the treads,  resulting in an oddly appearing flat spot with lack of tread detail as you can see in the two photos above. 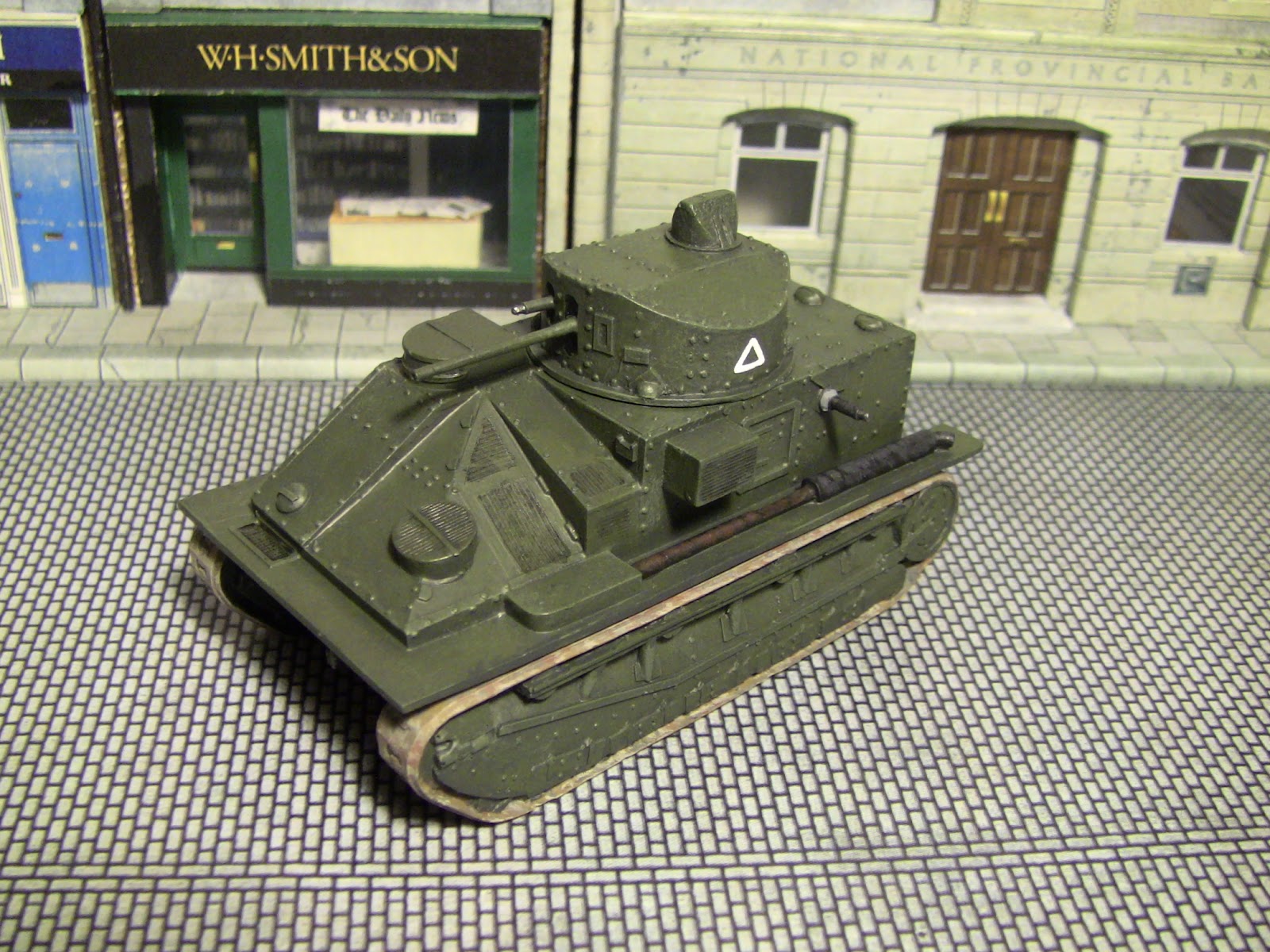 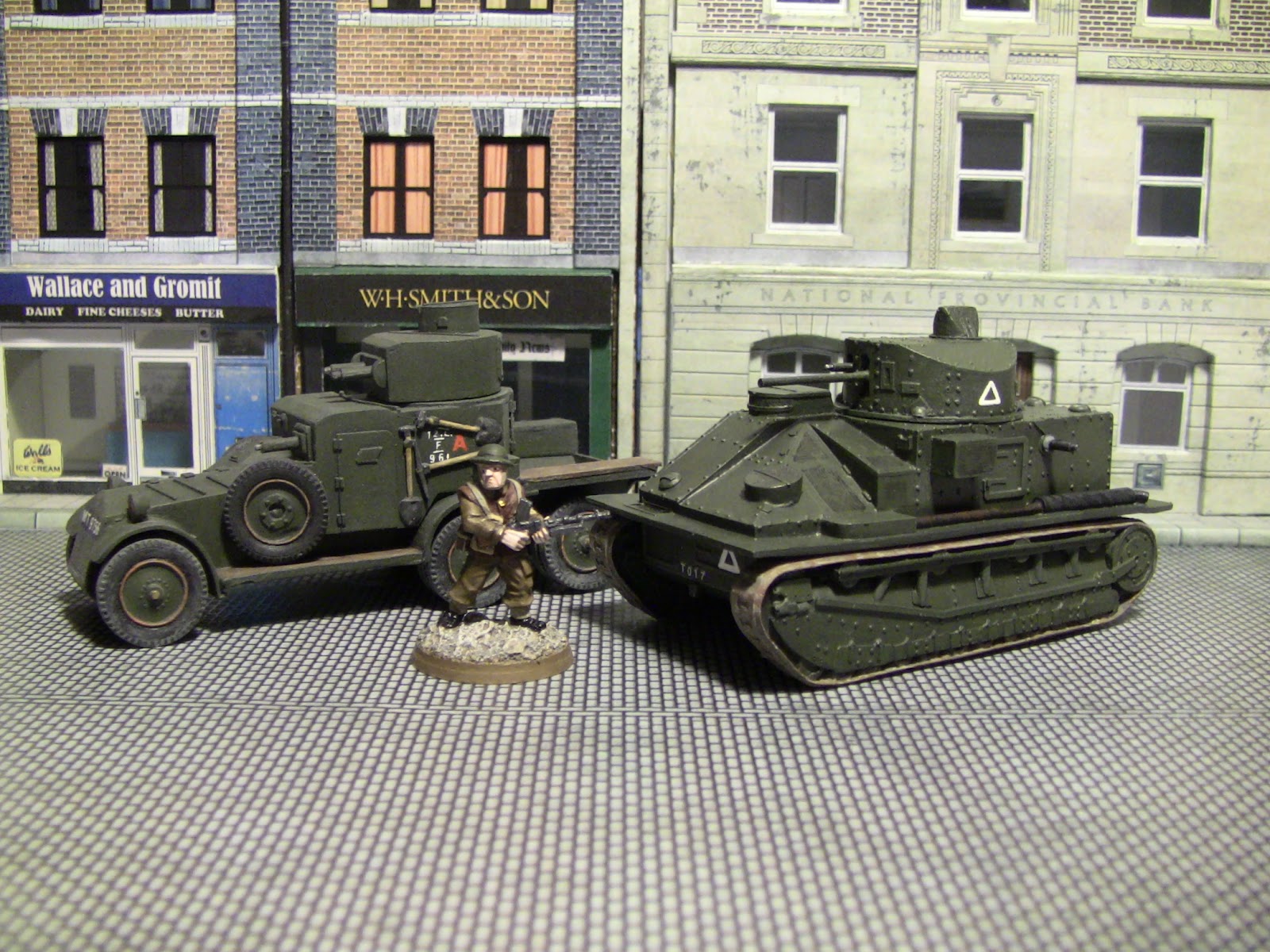 Here is the Mk. II next to an Artizan figure and a Lanchester armoured car, also produced by Copplestone.  While no giant, it is a reasonably sized piece.

Overall I think the Medium Mk. II is a fun looking tank and I'm glad someone was willing to produce it for gaming table. And while I think I ended up with with a reasonable model, the casting quality really lets the kit down and I'm not sure I'd buy any more of them unless that was resolved.

Posted by Major Thomas Foolery at 10:57 PM No comments: