During a virtual painting meet up, one of my gaming group members floated the idea of moving forward in time from our usual WW2 games and trying some modern skirmish wargaming. Though I've been trying to resist the urge to start a new project, he didn't have to twist my arm too hard to take the plunge. We toyed with a few options (Middle East, Afghanistan, former Soviet territories), but decided Africa gave us the best option in terms of army variety and not requiring a lot of vehicles. 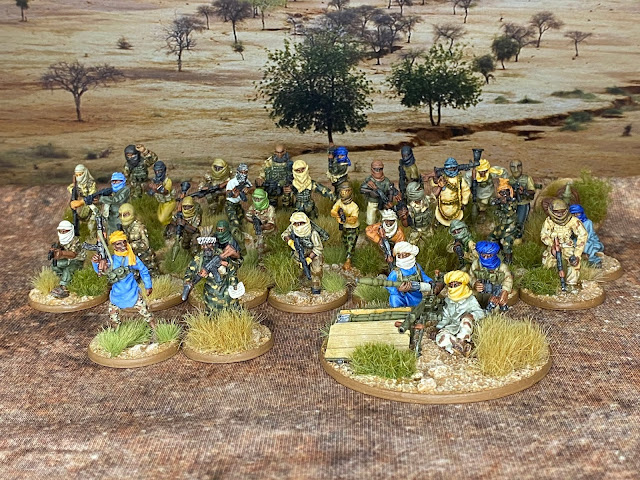 From my perspective, I thought the Mali insurgency in the early 2010's seemed the most interesting, so I started with an insurgent force appropriate for there. That said, I wanted it versatile enough that it could represent an Islamic terrorist group from any anywhere across the Sahel, from Ansar Dine in the west to Boko Haram in the east.
My initial purchase was some masked Somalis from Eureka USA, which I felt made great generic Africa insurgents. They also make bareheaded gunmen, but I thought that the bare chests and short pants of some figures looked out of place in an Islamic force. The figures are technically very well sculpted (particularly the weapons), but I do find some of them stiff and lacking in a lot of individual character.  However, they do paint up quite nicely. 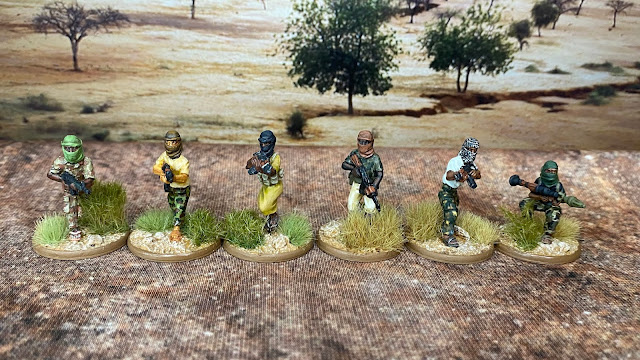 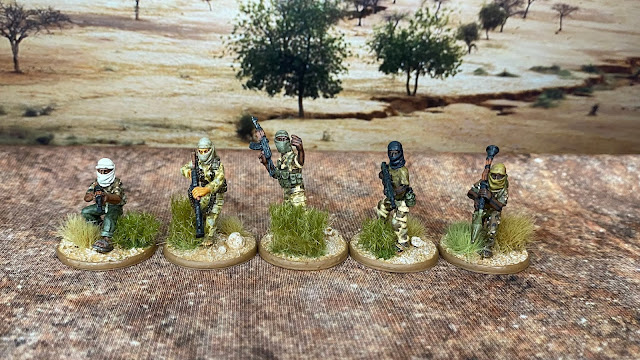 There were no heavy weapons in the Eureka Somali range, so I picked up a Russian SPG-9 recoilless rifle from their Afghanistan range instead. The SPG-9 was used in the Mali conflict, and since the figures were masked, I thought a bit of blue robing could turn them into a reasonable facsimile of Tuareg rebels. 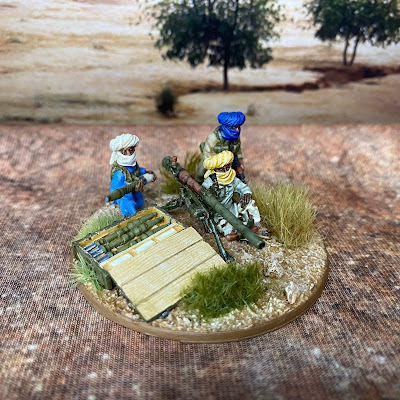 The next batch of figures I ordered were the Boko Haram insurgents from Footsore North America. The figures are thinner in style than Eureka's and a hair taller, but they do not have cast bases, which leaves the finished figures at a similar height.  While I think the sculpting quality is rougher than Eureka, these figures have a ton of character (the bearded machine gunner is my favorite in the army) and bring a lot of life to the force. 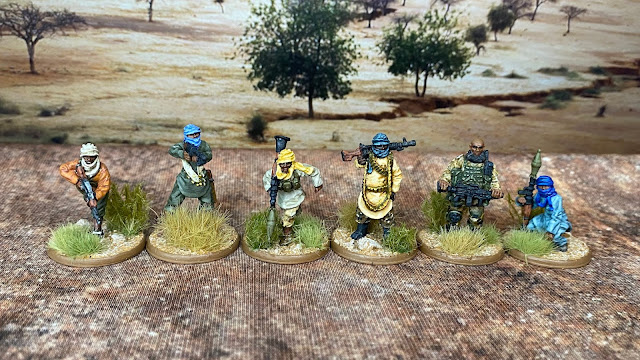 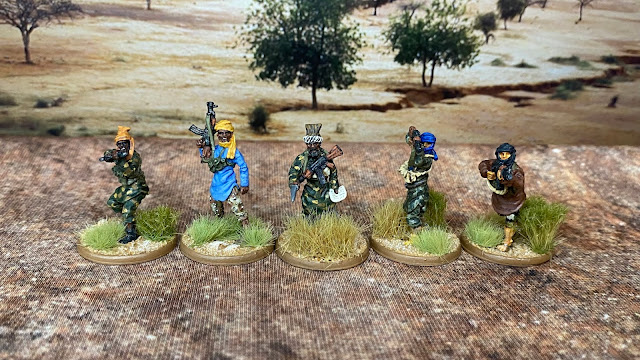 The last batch of figures I ordered were the Empress Miniatures, and these proved somewhat problematic. I had previously bought some of their Abyssinia and WW2 figures (both excellent), and they were a good size match to my Eureka and Footsore miniatures. So I expected the same with their modern line. However, it appears they were using a different sculptor and the figures were closer to 1/48 than the usual 1/56 (one figure was almost 32mm from base to eye).  I cut the bases off to help, and while pack INS02 looked more reasonable, the INS11 pack was still relatively big looking, particularly with the overly elongated necks on the figures. 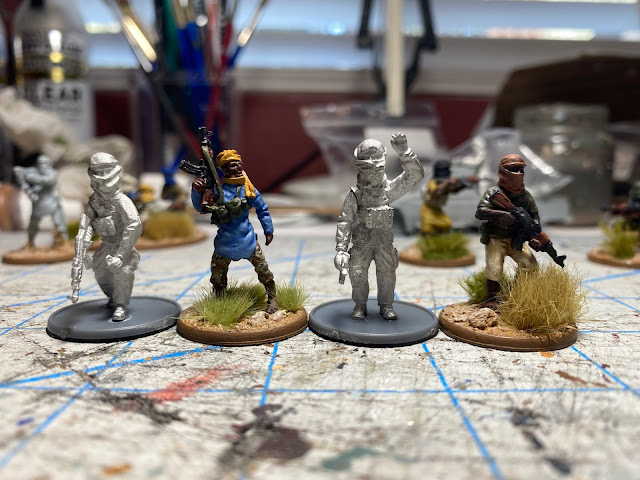 I was really unhappy with how they were looking, so decided to take the radical step of beheading them and removing a few millimetres of neck, covering the cut with some putty. 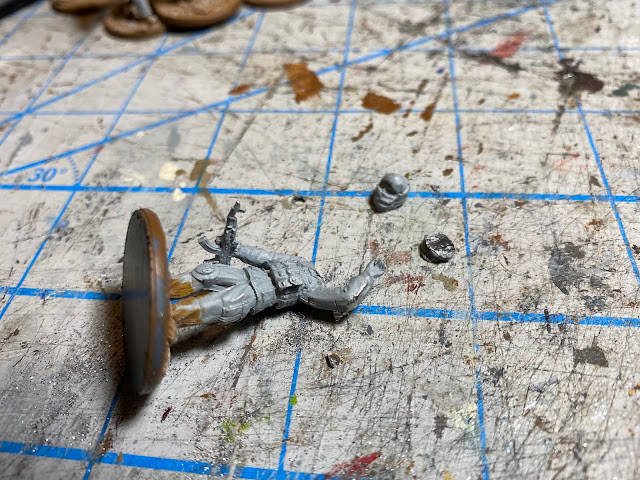 The modifications helped, but I still found the INS11 body proportions off, with skinny torsos, fat heads, and arms that seemed too long (pack INS02 was much better sculpted). 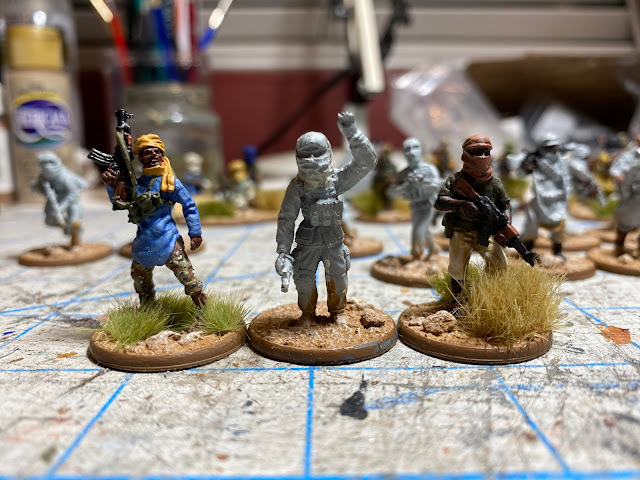 As you may be able to tell, the Empress modern figures were not my favorites, and with the larger sizes and hit and miss sculpting quality, I think I will avoid this line in the future. But that said, I was able to hide these in my army without them being a major eyesore. 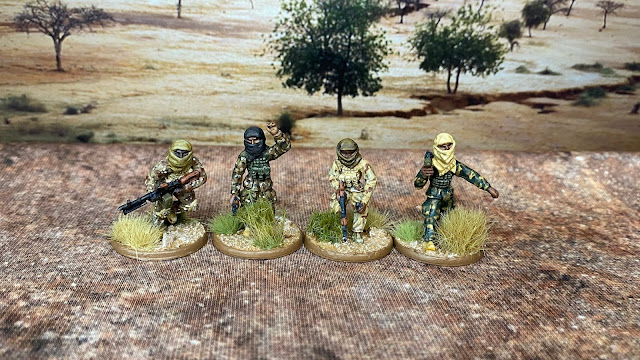 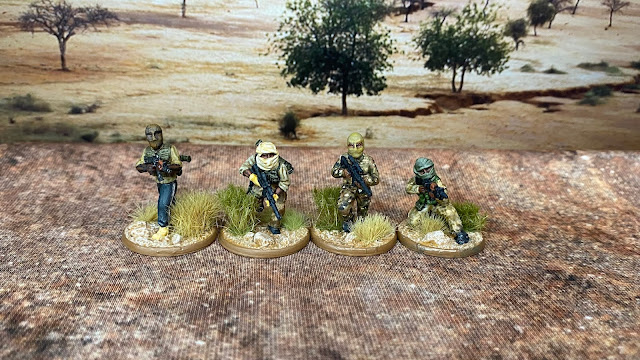 In terms of painting, this was a new challenge for me, as I'm not really experienced at painting camouflage uniforms, and my usual painting style uses few to no washes (but most modern army painting videos recommend their use for shading). It was a bit of a learning curve, but I think I got better as I progressed through the figures and overall I'm happy.  For the paint schemes, I used a lot of reference photos of insurgents in Mali, Chad and Nigeria. Uniforms seemed to be quite a mishmash of camouflage patterns, even in the same units, so I tried to reflect that here. I also tried to throw in a little bit of blue fabric to represent the Tuareg elements. For the skin colors, I mostly went with dark and medium brown sub-Saharan tones, with a few lighter skinned figures to represent Berber fighters who had come south.
As with most of my hobby projects, there has been some scope creep, so I have some more insurgents making their way to the painting desk (including a technical), and then will move on to some French Foreign Legion to battle them.  My local opponent has yet to select and paint an appropriate force of his own, but my hope is we'll be able to to get these on the table later in the year.
Posted by Major Thomas Foolery at 7:09 PM 3 comments: