My tropical Asian village is expanding, with some new Sarrisa buildings to add to the ones previously purchased from Warbases.  The upgrades made to these kits aren't much different to what I did in the previous post, so I won't go into the details again here. But in summary, I've done some distressing, carved in some planks and wood grain, and added thatched roofs and a bit of lumber.

First up is the planked wooden house: 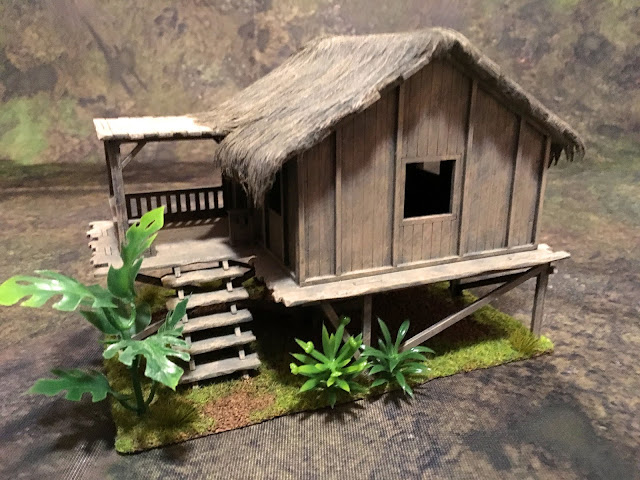 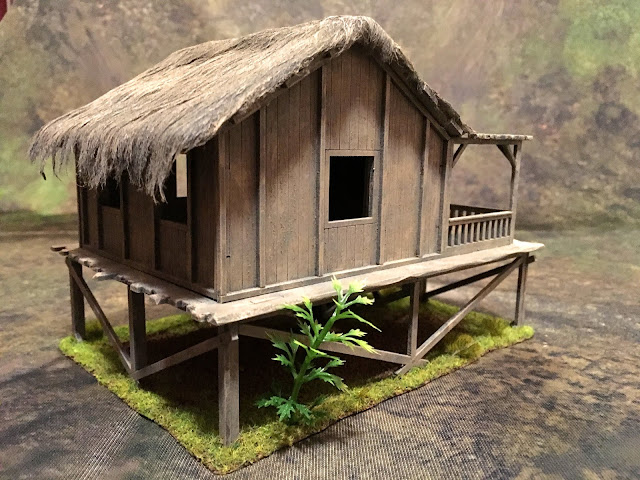 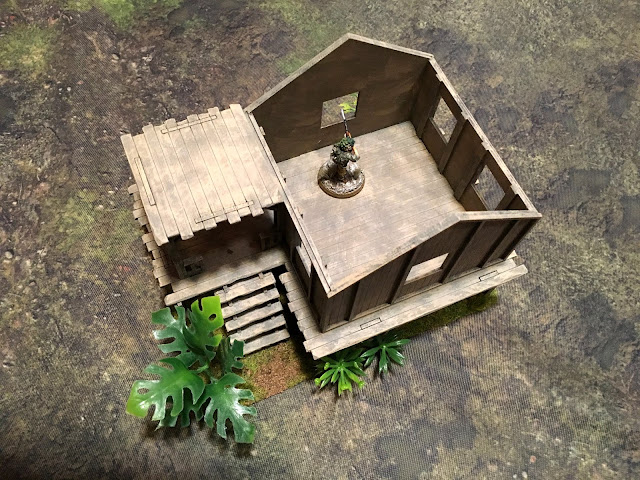 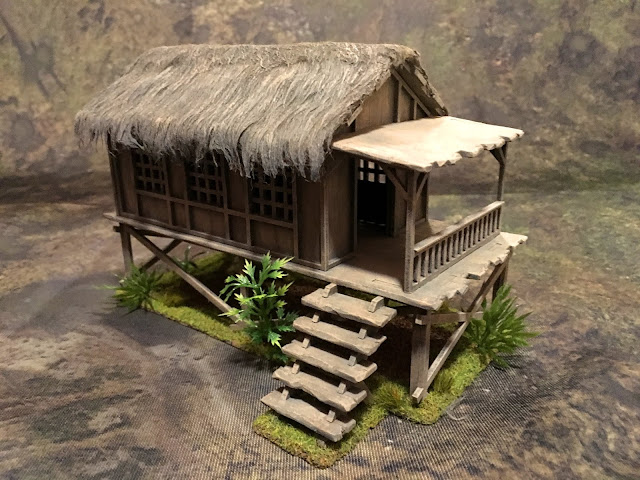 Note: When assembling the side walls on this kit, please note that they are not symmetrical, so you have to be careful when you add the outer frames or the posts won't line up properly with the windows. 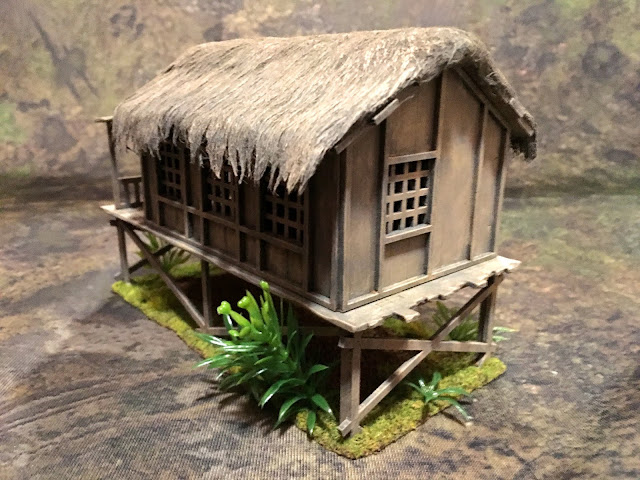 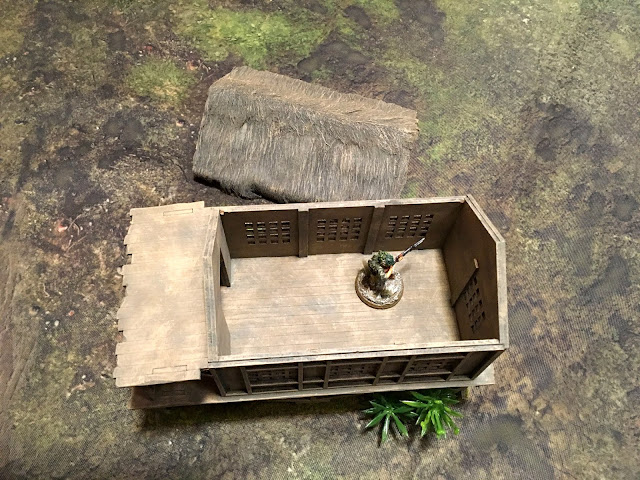 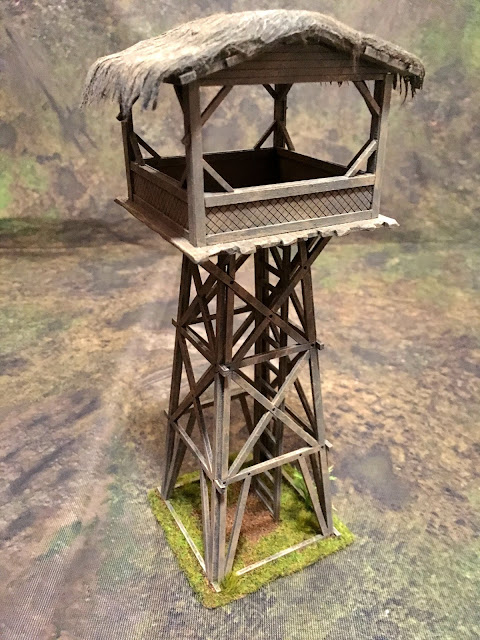 Note: some additional lumber was added to the top of the tower to improve sturdiness and also the visuals. 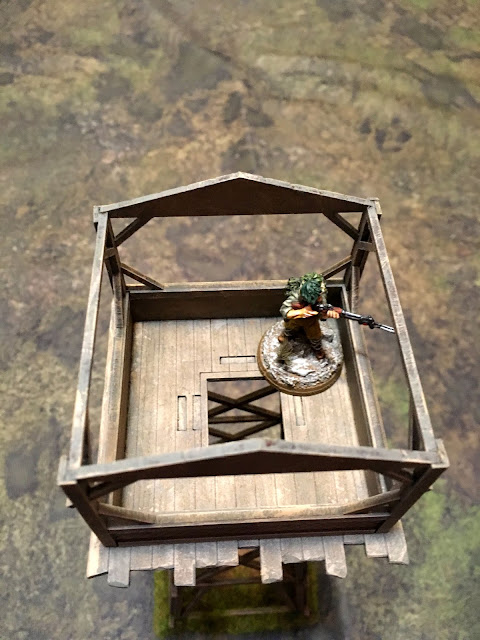 So how do the two brands compare to one another?

Size:
Overall the footprint is pretty close between both brands buildings, so no real advantage to either side.
Included Details:
Each brand has their relative strengths and weaknesses. Sarissa has 3D support beams on the outer walls, while Warbases are just etched in. Sarissa etches beams into the interior floors, while Warbases leave the floors plain. Warbases included shutters and widow covers, while Sarissa does not. Warbases is good at hiding the seams where pieces joins, while Sarissa's can be lazy in their obviousness.  A perfect example is in the image below, where the the head of the stilts can be in the floor.  On the Warbases buildings, the walls run down the same seam lines as the stilts and hide the joints. 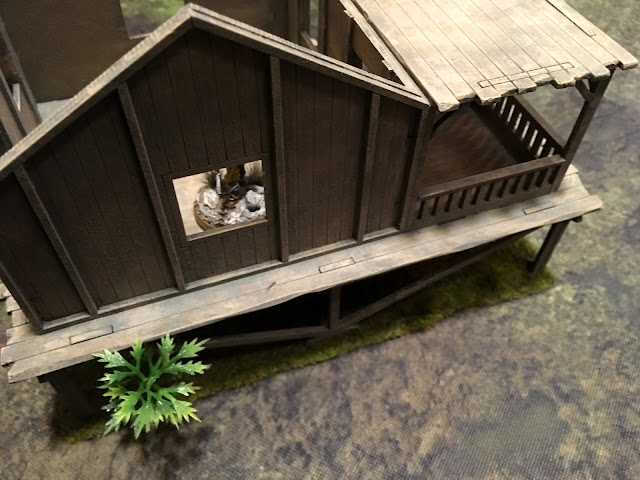 Final Verdict:
Both companies make very nice buildings and I'm happy with my purchases from each.  If I had to pick one over the other, I'd likely give Warbases a slight edge for the sturdiness of their designs. And if you are willing to add in extra details such at thatching, I think their MDF nature isn't so glaring on the table. 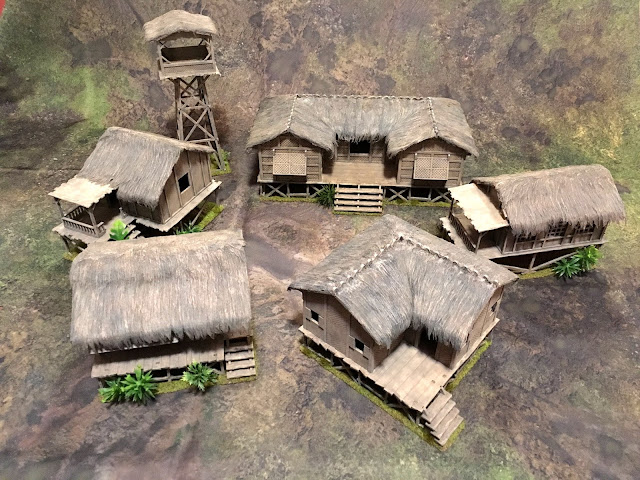 New Additions to My Chinese Army

Back with a few additions to my Chinese Nationalist army. First up is a M4A4 Sherman, painted as part of the 1st Provisional Tank Group in Burma, 1945. 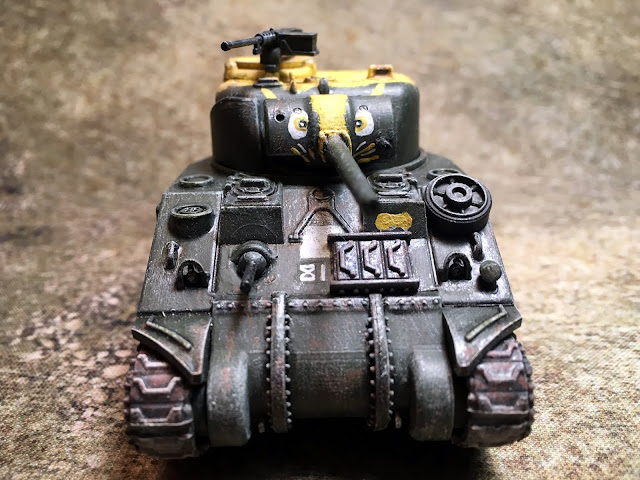 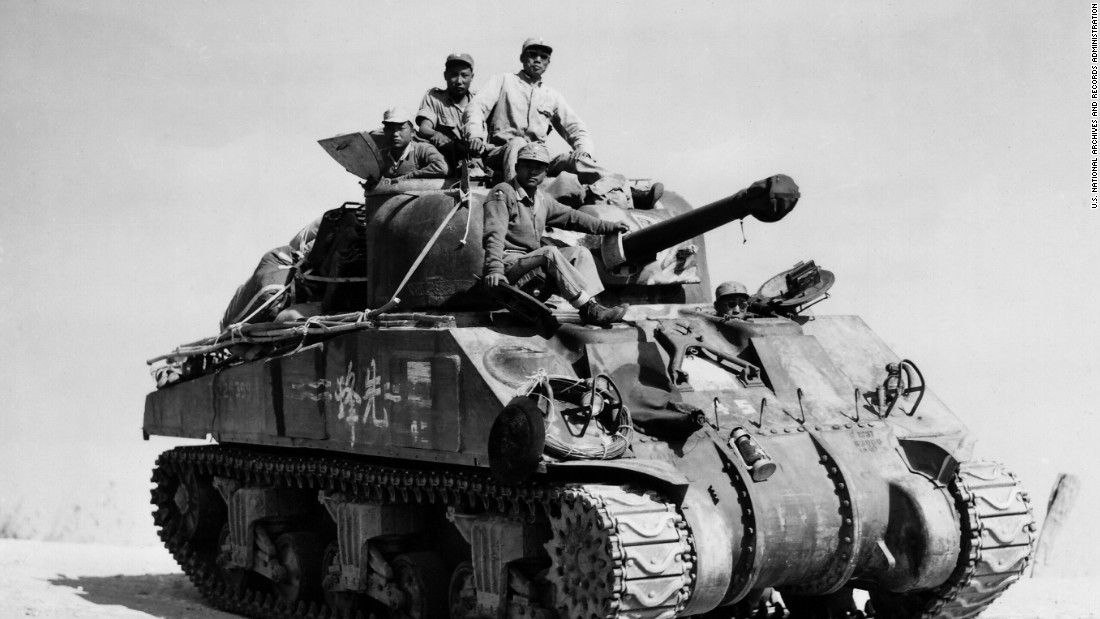 The model is the plastic Sherman V from Warlord Games. It's a good kit that was easy to assemble and comes with a variety of stowage options. 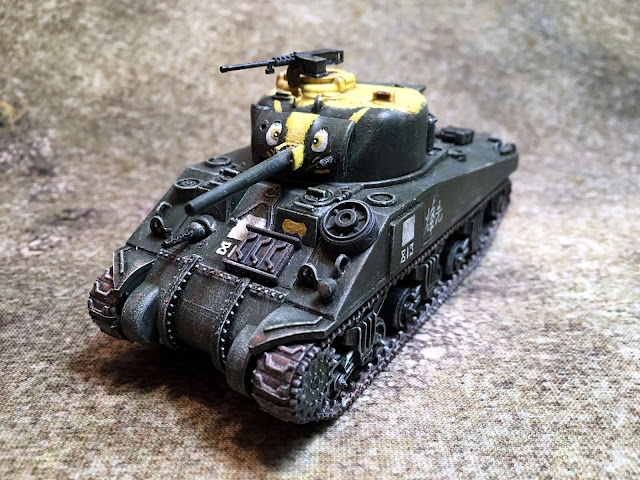 The kits comes with British decals, so I was forced to hand paint the details.  My attempt to paint the Chinese calligraphy will likely make a native speaker cringe, but I think it's good enough for the table. I'm not exactly sure what type of creature they wanted the paint job to represent, but my guess is it's some sort of tiger caricature. 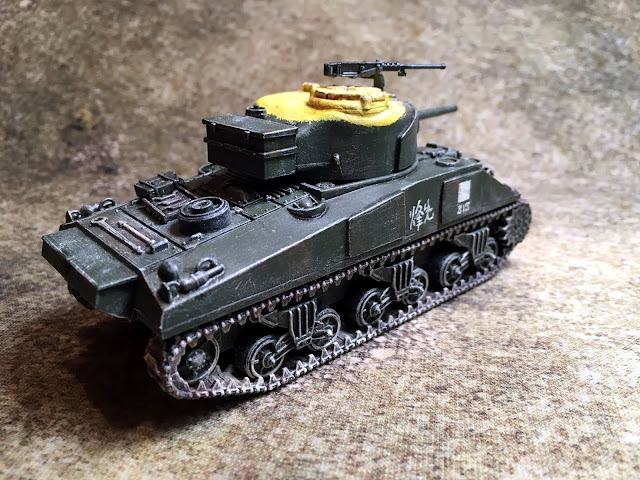 Next up are a couple of HQ figures: a medic and forward observer. They were made from Warlord Japanese plastics with metal German heads (the observers also has a spare Chinese sword from Copplestone). The faces are a little more European looking than I'd like, but hopefully it won't be too noticeable. Size-wise, they fit in fairly well with my other Chinese troops, being slightly larger than my Brigade figures. 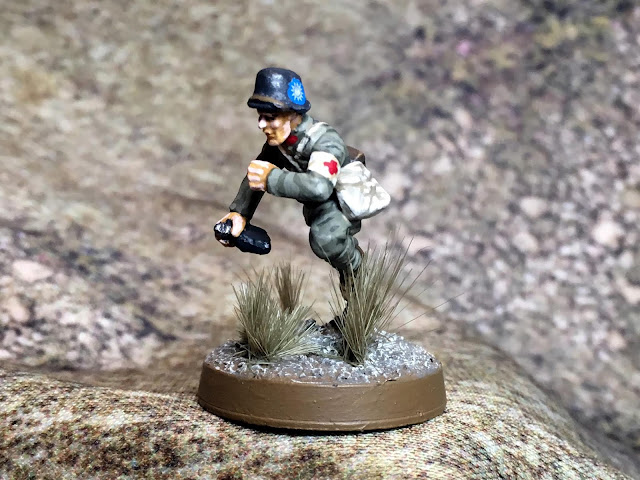 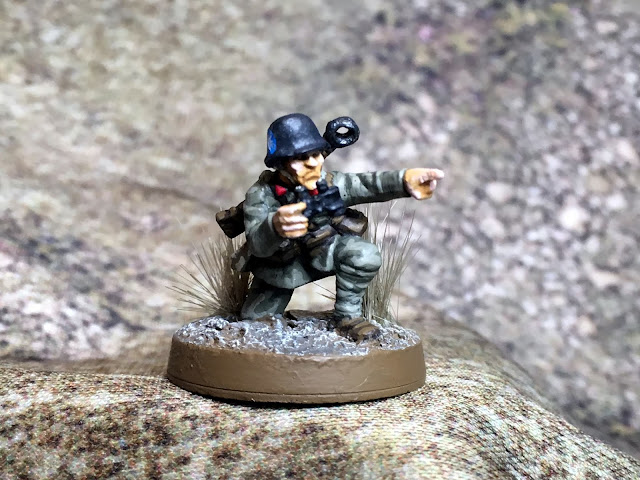 Finally, a sniper team to pester the enemy.  These are actually from Warlord's British range, but I think the Ghillie suits are generic enough that they'll blend in with my forces. 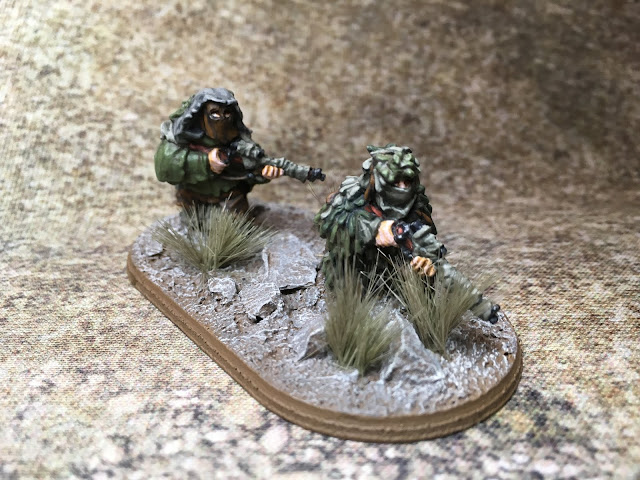 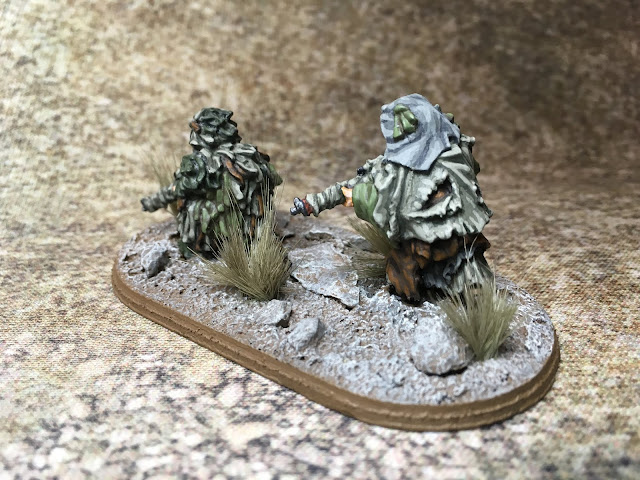