With the insurgents complete, I've started working on my French Foreign Legion. Currently, no single company makes all the pieces I wanted, so I've gone with a combination of Eureka Miniatures and JJG Print 3D figures. Based on information from people with more knowledge than me, the Eureka figures are good for the 1990-2000s, and the JJG for the 2010s to present (depending on the sculpt). Since I was planning to game Operations Serval and Barkhane in the early 2010s Mali, I figured a transitional force wouldn't look grossly out of place.  I still have more to paint, but have completed a command team, a combat group, and some specialists 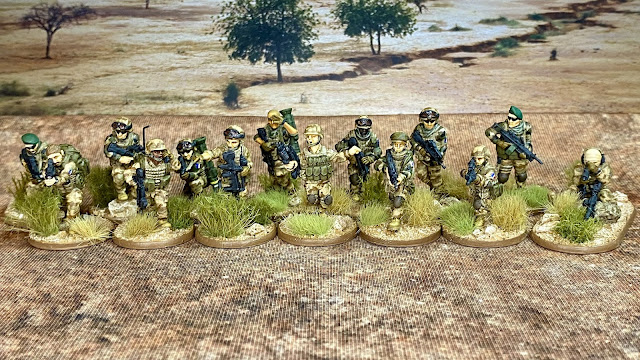 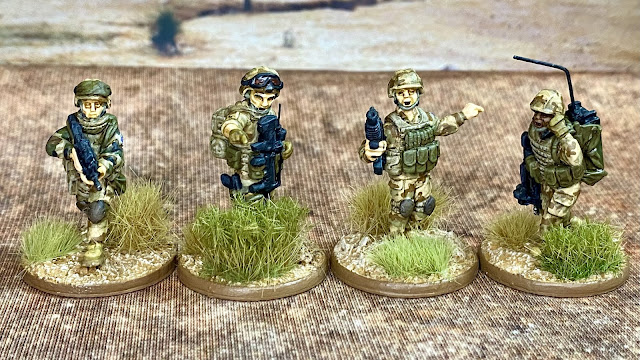 NCO and 300m Team with FAMAS rifles and AT4s 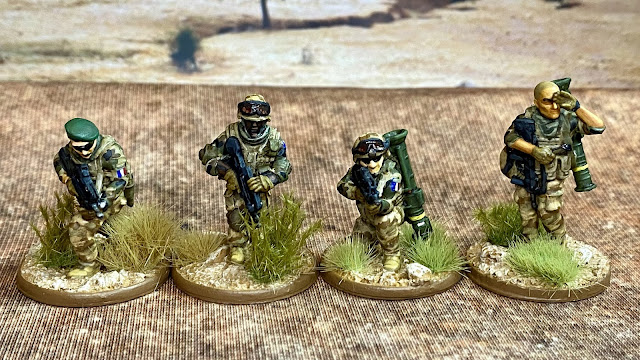 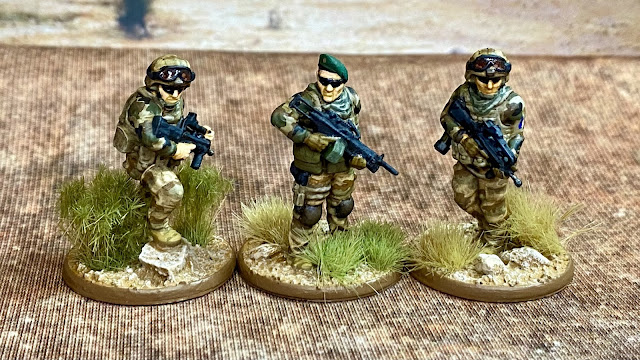 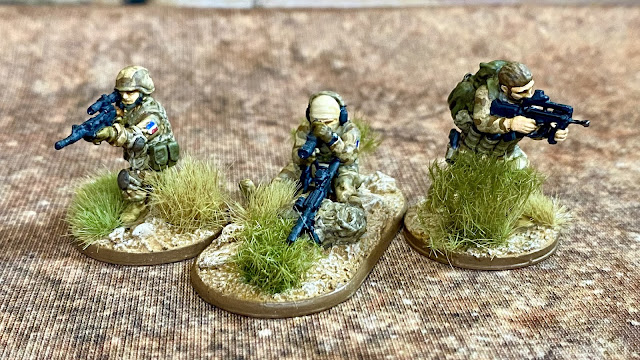 Tracker Unmanned Aerial System (Note: I don't think this drone type was deployed in the early 2010s, but drone options are limited) Edit: Raphael Longbow, the sculptor for JJG Print 3D, sent me a message on Facebook to clarify that the drone model is actually a DRAC, which became operational in 2008. 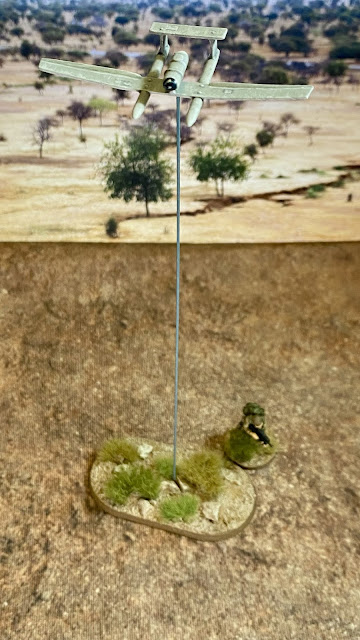 I am in no way an expert on the French Foreign Legion, so I found the Foreignlegion.info site to be invaluable in terms of painting references.  From photos of troops deployed in Mali, it seems that camouflage was mostly the desert pattern, with some temperate pieces as well.  Webbing elements tended to be tans and greens, with some individual soldiers having a mix of the two. As such, I've decided to go with a mix of appearances to add more variety and make it easier to differentiate between combat groups.
If anyone is interested, here are the painting mixes I came up with:
Desert Camo: Vallejo 891 Iraqi Sand base with Vallejo 821 German Beige and Vallejo 983 Flat Earth splotches; Wash with a mix of Vallejo Mecha Weathering 521 Oiled Earth and 522 Desert Dust
Temperate Camo: Vallejo 884 Stone Grey base with Vallejo 893 US Dark Green, Vallejo 871 Leather Brown, and Black splotches; Wash with Army Painter Soft Tone
Tan Webbing: Vallejo 821 German Beige with Vallejo 884 Stone Grey highlights; Wash with Vallejo 521 Oiled Earth
Green Webbing: Vallejo 887 Brown Violet with 924 Russian Uniform highlights; Wash with Army Painter Soft Tone
Metal Equipment: Vallejo 894 Camouflage Olive, with Camo Olive/833 German Camouflage Bright Green mix; Wash With Secret Weapon Green Black
Since people are also curious to see how figures mix with one another, besides the painted figures, here are some of both manufactures in the raw.

The JJG figures are slightly taller than the Eureka and are also a little bulkier, with it being particularly noticeable in the helmets. Similar to injection plastics, some of the details can be softer than seen on the metal Eurkea figures, but it also allows the use of thinner parts (check out the radio antenna on the commander's walkie talkie or the sunglasses in the hands of the AT4 operator wiping his eye) Overall, I think once painted they blend in well on the table and I would recommend both manufactures wholeheartedly.
Posted by Major Thomas Foolery at 12:27 PM 7 comments:

The last of my insurgents are now ready for the table. 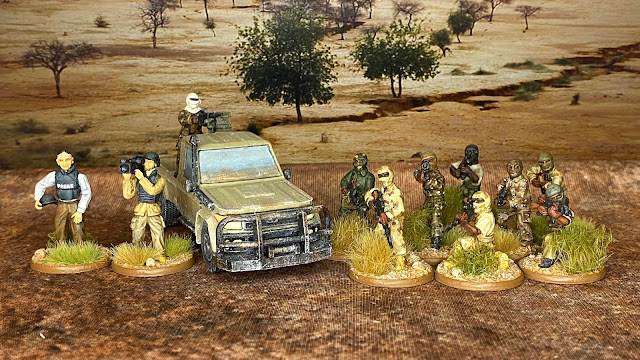 This batch of insurgent infantry comes from The Assault Group's terrorist line rather than than the Africa irregulars, as I thought both the clothing and sculpting style was a better match for my current miniatures. In addition to the AK equipped members, I grabbed some PK machine gunners and a couple of snipers with SVD-63 Dragunov rifles. Sculpting was good, but I had to do a lot of clean up in the space between the arms and body.  Additionally, all the rifle barrels were badly bent coming out of the packages, and they took a fair amount of work to get straight (and I managed to break one during the process). TAG may want to looking into using thicker foam in their packaging to prevent this. 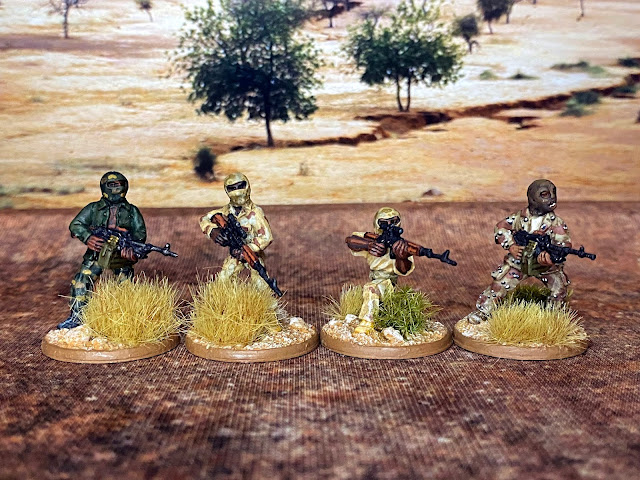 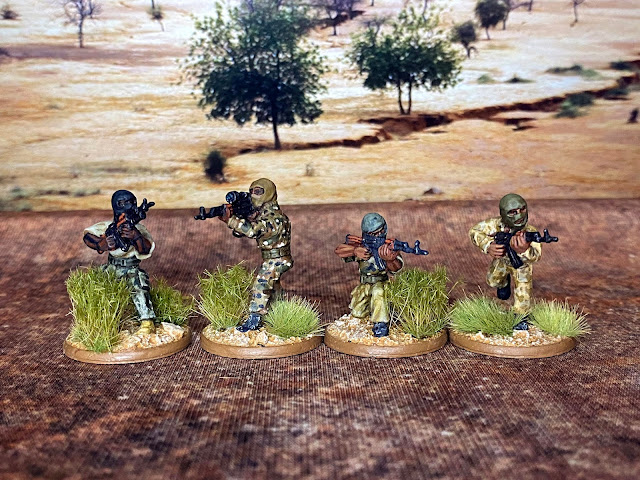 Next up is the Footsore technical and machine gun with an Empress gunner.  The body of the technical was a well cast resin piece and I had no issues with the primer and paint sticking to it.  Detail parts were white metal, and you got a variety of options, not all of which I used here. 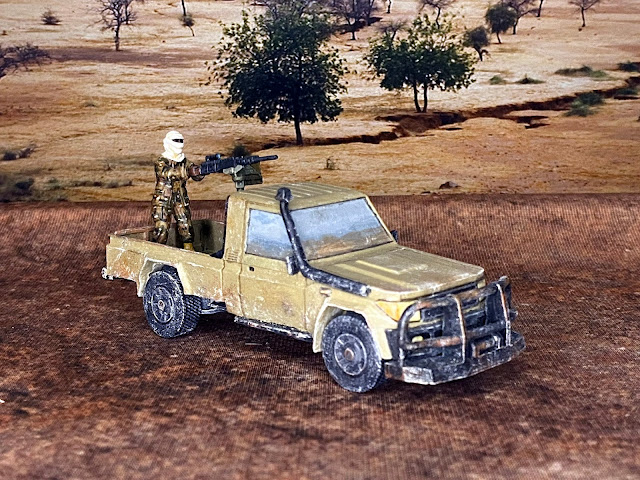 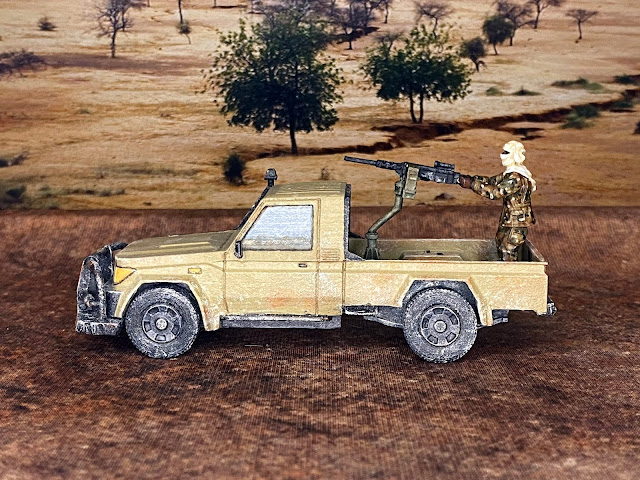 As Toyota seems to be the king of technicals, I used some Woodland Scenics dry rub decals to add the company name.  They were a bit fiddly to apply compared to wet decals, but I think the final effect is acceptable. 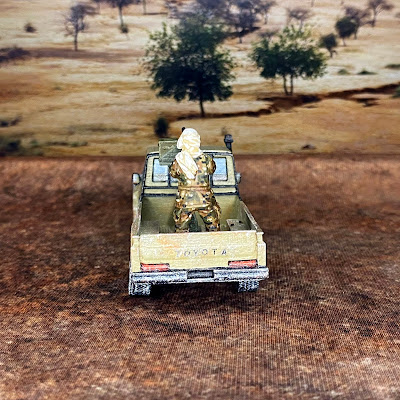 I also added some brass rod clippings to look like spent shell casings in the truck bed. 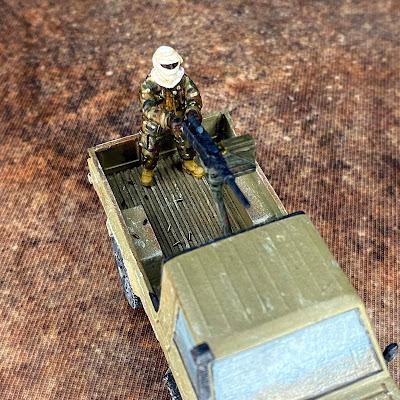 Finally, I painted up a few Empress journalists to use as objective markers during games. The sculpting of the main reporter's face unfortunately looked a bit like Voldemort with its very flat nose, but what are you going to do. The "Press" wording was added to his vest using more of the dry rub decals. 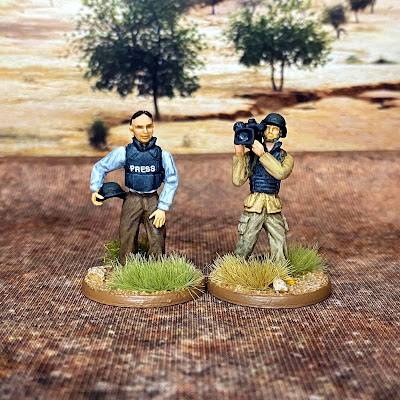 The journalist figures were another of the oversized type Empress is releasing in their modern range. As you can see below, this supposed 28mm figures is almost 33mm to the eye when on its base. I'll just have to say it's a Dutch news crew if anyone comments on the height. 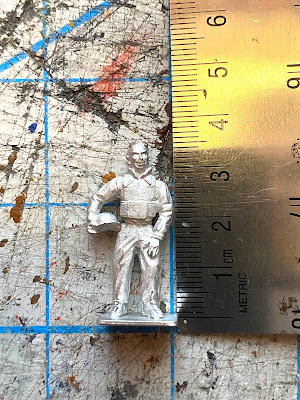 Which brings me to the next question, how do all these ranges in my force compare to one another?

As you can see, there was some height variability among the Empress figures, and with the bases removed it was hit or miss on if they would still tower over the other miniatures. Figure bulk varied across the brands, with Footsore being on the thin side, Eureka somewhere in the middle, and Empress and TAG being a bit more hefty. Weapon sizes were fairly close across all the brands. With the unifying paint jobs and basing, I think they we will generally look good en mass, with perhaps just a few figures that shouldn't be put in the same units.
With that, it is now time to start on the French Foreign Legion force to counteract them.