Over the last year other projects took priority over my working on the hutong, but this year my primary hobby focus will be on adding more blocks to this project. 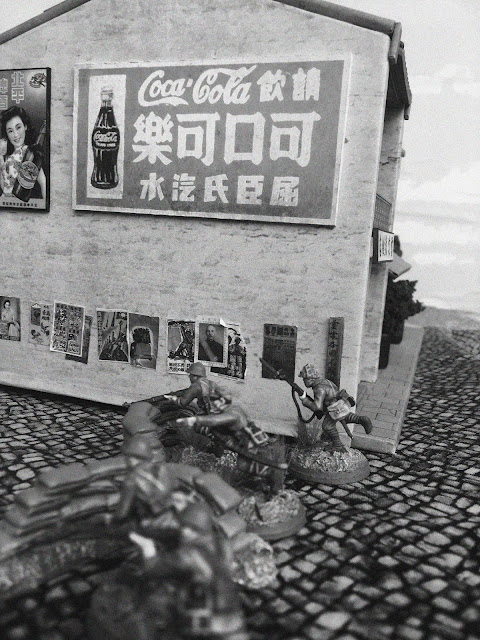 Inspired by the photo below from the Battle of Shanghai, I decided to build a commercial section for the next block. 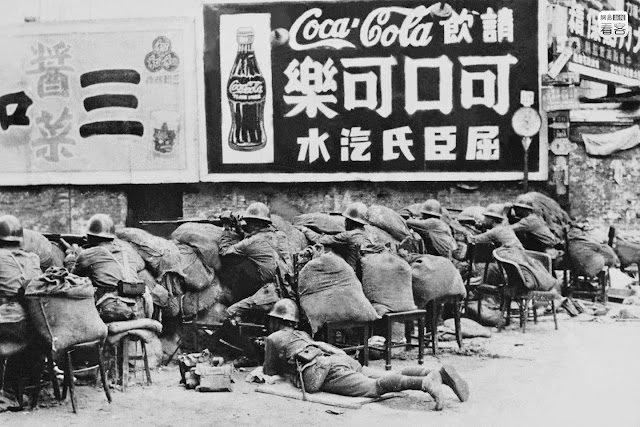 Since I didn't provide a lot of construction details on the last block, I'll do my best to walk you through my build process this time. First off is mapping out the building layouts on the base, in this case a 10" x 10" (25x25cm) section of foam core board. I prefer foam core for bases as I think it's sturdier and lest likely to break than plain high density foam.  However, for the buildings themselves I still recommend Woodland Scenics 1/4" modelling sheets (Item #C1176).  I've never managed to find a piece of foam core completely free of warping, so I do my best to keep the flattest section towards the front. 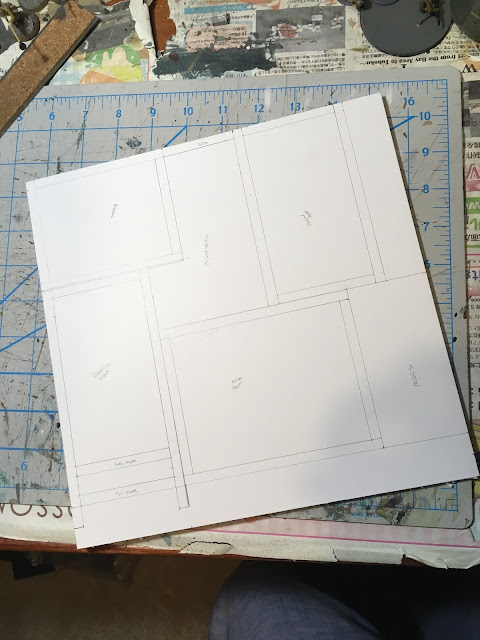 As with earlier builds, I'm texturing this project using OO scale sheets from Scalescenes enlarged to 120%. Currently I'm using glue sticks to hold everything down, as I found it tends to minimize swelling and bubbling of the paper.  I'll have to see how study the glue is over time. 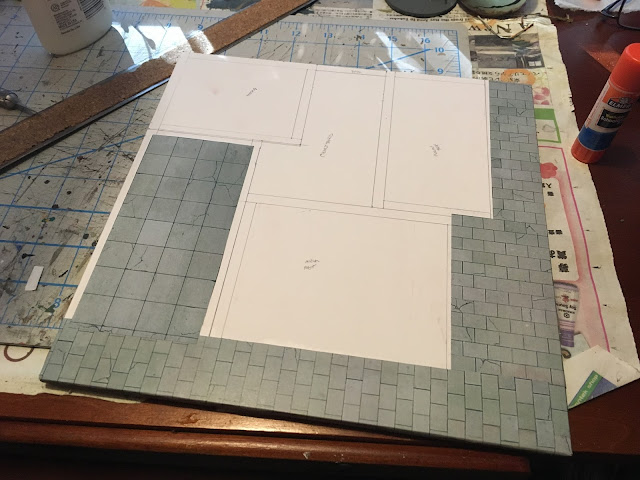 As I'm free cutting all the pieces rather than using something fancy like a laser cutter, I tend to cut the pieces for one building at a time and assemble it before moving to the next adjoining building. This gives me to opportunity adjust measurements to accommodate the errors and irregularities that creep into my cuts. I use standard white glue for assembly and hold everything in place with small clamps while the building drys. 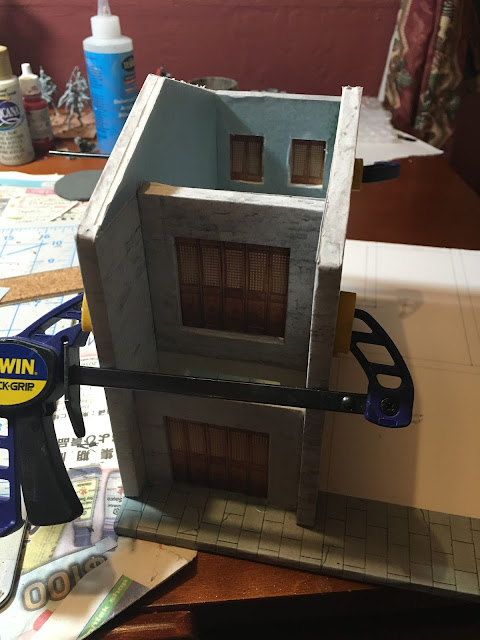 Most of the architectural elements are printed images pasted on to art board, but some things such as railing would be difficult to cut, so I use plastic elements as appropriate.  This railing is from Grandt Line's O Scale range (Item # 3555). 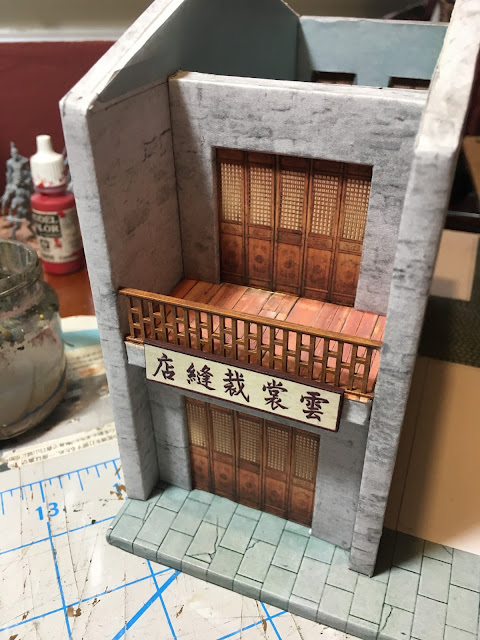 To avoid unsightly white areas and paper edges that could start peeling, I recommend painting the foam edges an appropriate color and them folding the paper over the sides where feasible. 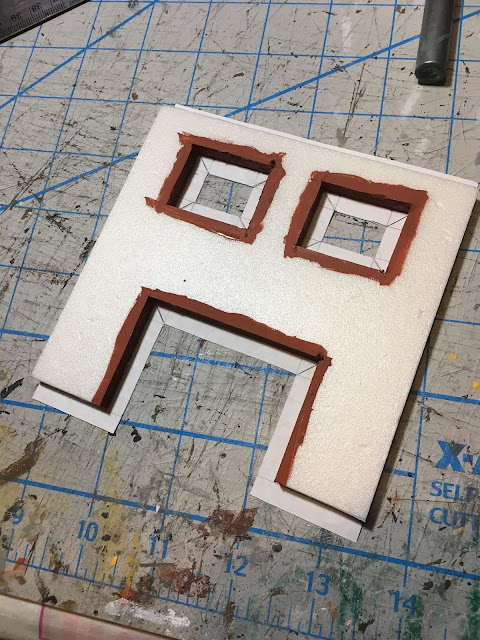 To help with the paper application and folding, I recently picked up this decoupage set which is working well. The roller removes air bubbles and bumps when applying the paper, and the rubber edging tool lets me firmly press the paper down in tight corners. The only warning I would give is that the the red roller bled onto some of the paper (not sure if there was some sort of manufacturing residue still on it), so I would wash the roller with soap and water before use.  Sadly, I learned this the hard way and ended up with some reddish streaks on the sidewalks that I had to try to touch up with paint. 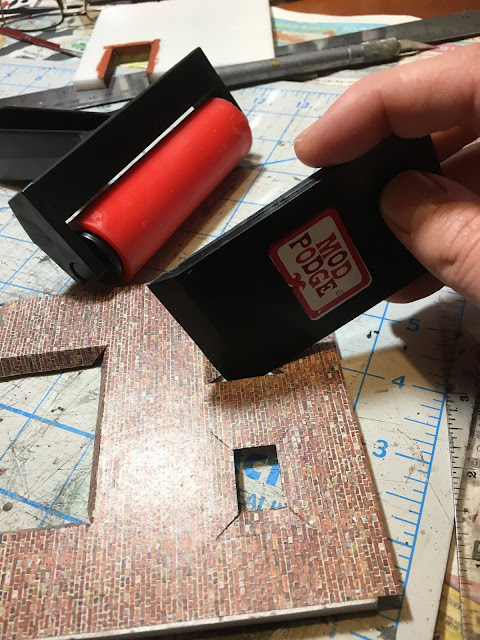 Here's a close up of some edge folds and an overlay on the outer corner of the wall to hide the seam. Some of the faint red tinting from the roller can also been seen on the sidewalk next to it. 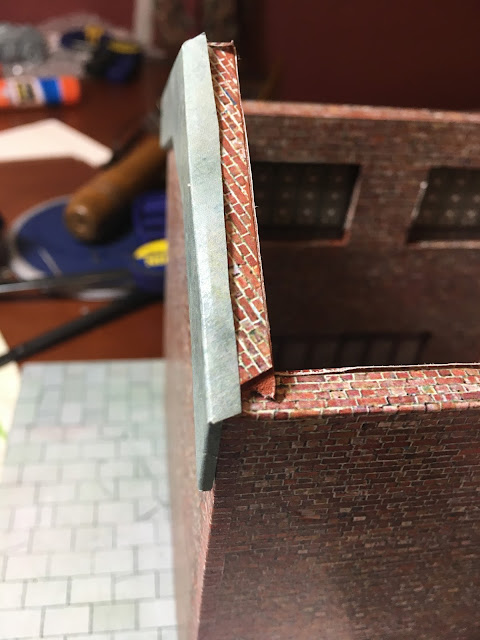 I originally planned to have two trees along the side of the red brick building, but during construction I realized it would be too bulky, so decided I needed another element and went with a newsstand. I found the below photo from the late 1940's and thought it was a good starting point. 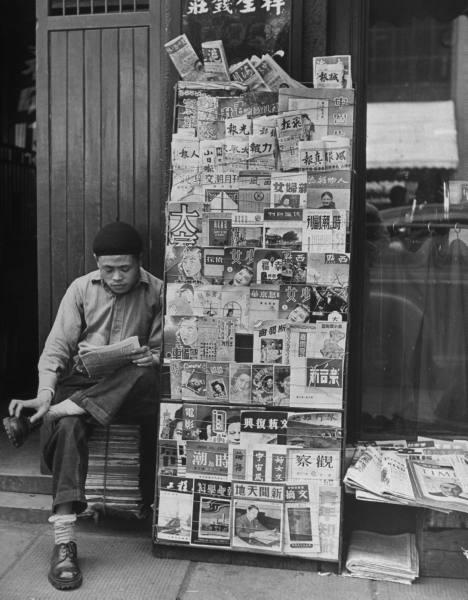 I wanted the racks to have a little depth to them, so I printed out multiple copies, glued them to some thin card, and randomly cut along the edges of the periodicals. Since I didn't want each rack to look identical, I also glued some individual magazines and newspapers to the various layers. To complete the newsstand, I printed out some Chinese newspapers that could be folded and stacked on the ground around the stand. 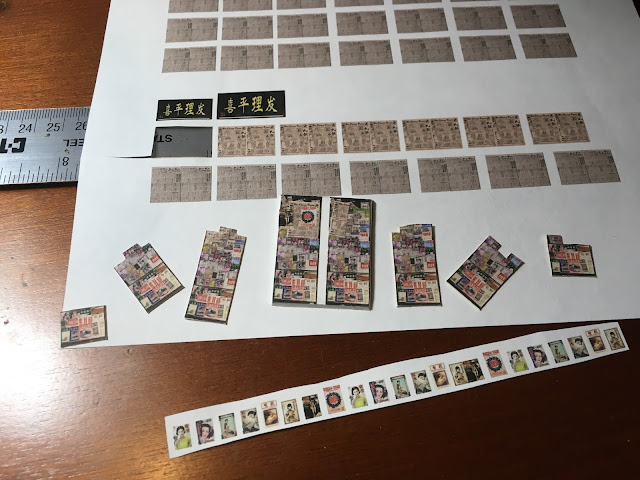 And now the final block. For the main street, I've got two, 2-story shops with a tree to the side.  The tree base is used to hide the seam in the sidewalk where the brick direction changes. 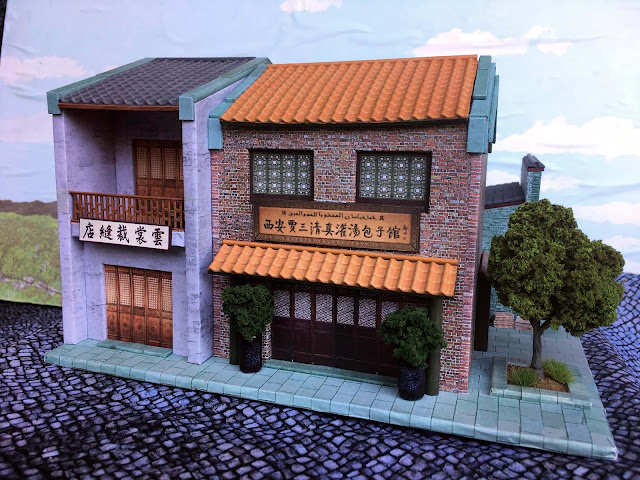 The right side hosts another shop and the small newsstand. Upon completion, the roof of the newsstand ended up looking too low, but I didn't think it was worth the potential damage to the red brick building to rip it down and rebuild it. 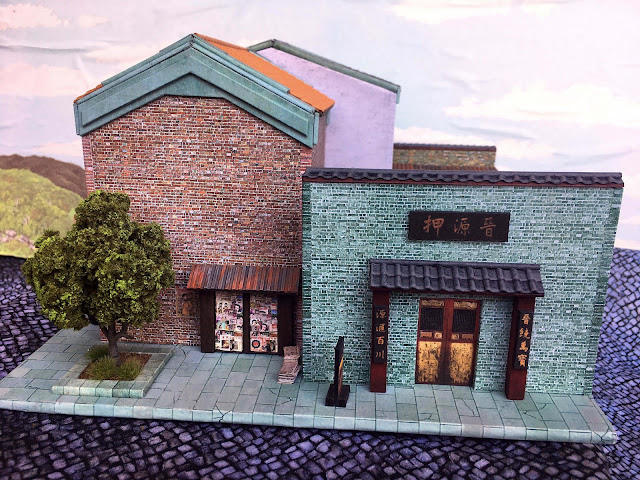 The left side has another small shop and a wall covered in advertising and propaganda posters, including the Shanghai Coca-Cola sign. 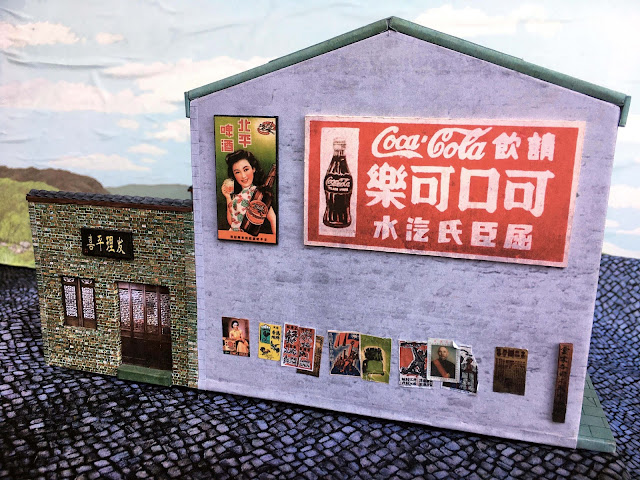 I had originally planned to include a small gate at the alleyway entrance, but felt it might be tricky to get enough clearance with the roof lines so I opted to leave it open. I might eventually add some boxes, but didn't currently have anything in my collection that looked appropriate. 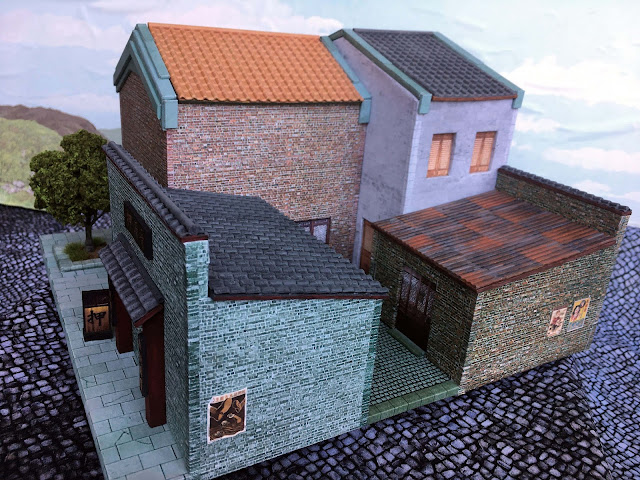 As with the last block, the roofs can be removed to access the interiors. I contemplated added upper floors, but felt it was going to be too difficult to take them out and in during a game. 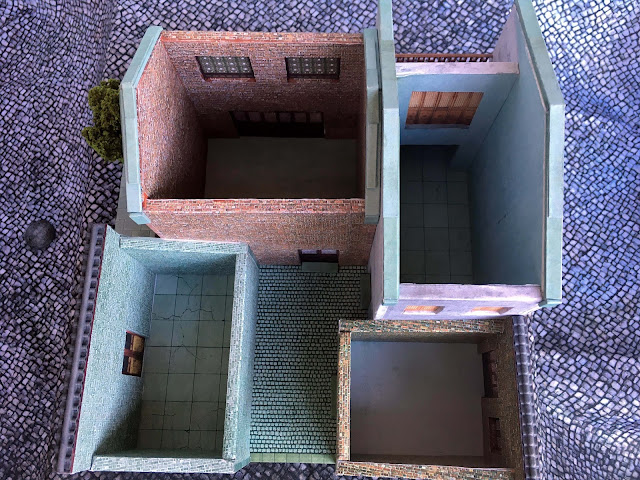 Finally, just a few close ups of the individual shops.  First up is a tailor/clothing shop with an apartment upstairs. 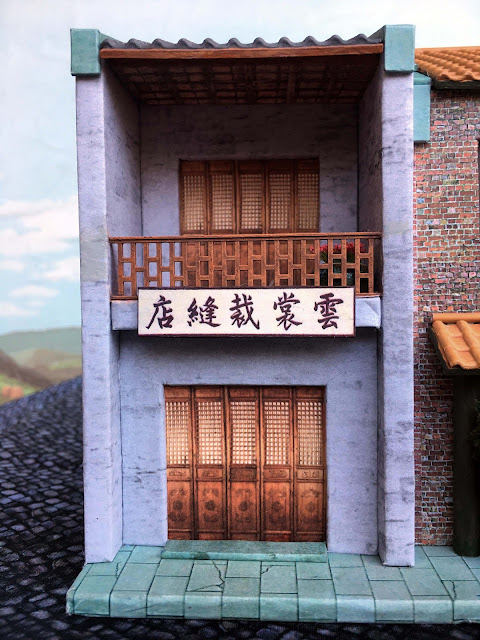 A Muslim Chinese restaurant. The potted plants are N Scale trees inserted into some jewelry beads from the craft store. 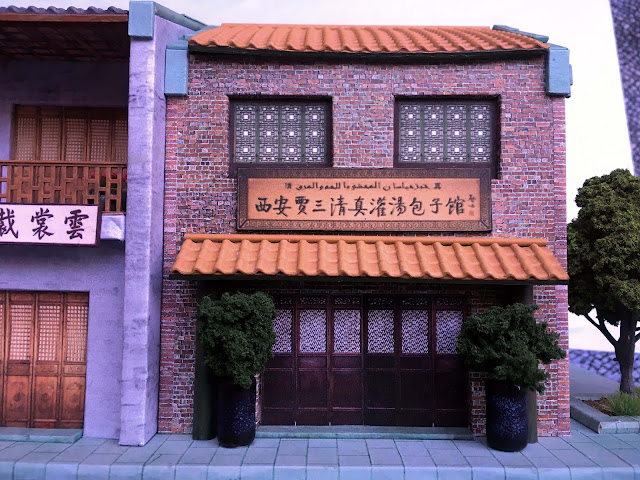 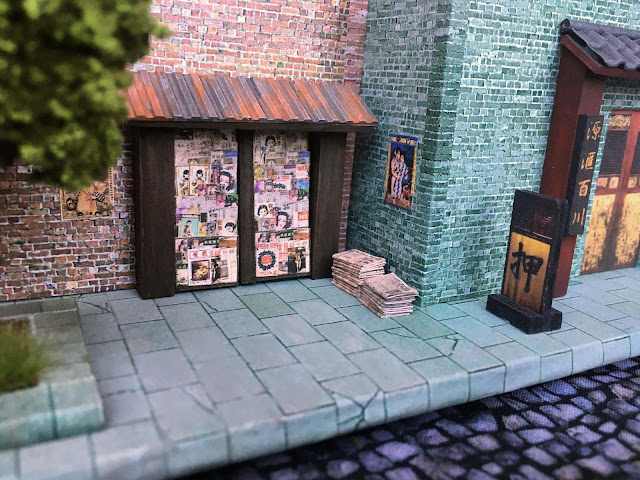 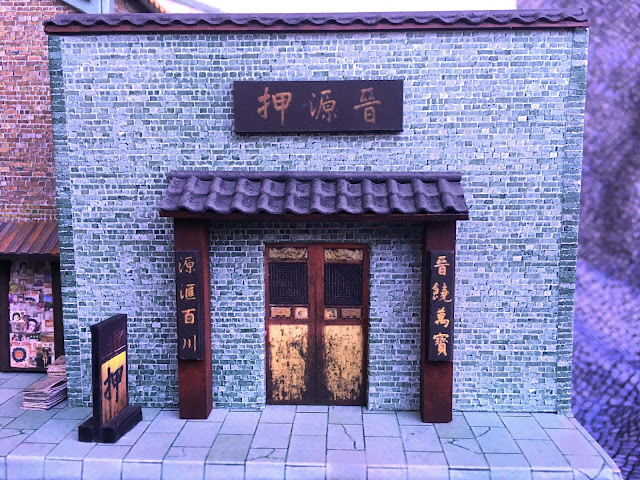 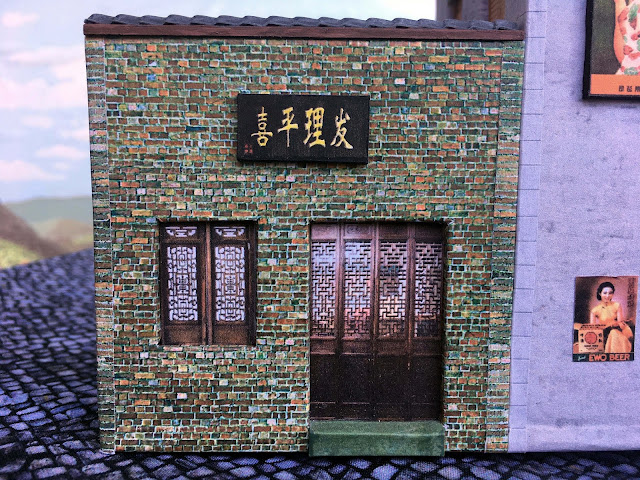 The majority of the advertising and architectural elements seen here can be found online or with my other blog entries, but the Coca-Cola sign was created new for this build.  As such, I'm including a copy here for personal use. 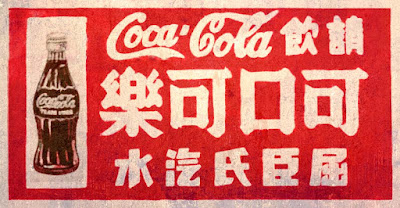 I had really hoped this block would go a lot faster than the first one, but it still took me almost 6 weeks to complete. As such, I think a town of any significant size (I'd like at least 6 blocks) is going to take until the end of the year to complete, so we'll see if my interest holds firm or if other shiny projects get me distracted in the mean time.

Overall, I am happy with how this block turned out and I'm looking forward to getting it on the gaming table.
Posted by Major Thomas Foolery at 2:15 PM

Email ThisBlogThis!Share to TwitterShare to FacebookShare to Pinterest
Labels: Back of Beyond, Terrain, World War Two